The Details of Trump's Pals and Their Russian Connections

posted on May, 11 2017 @ 09:34 PM
link
Trump supporters need to wake up and smell the coffee that the FBI has been brewing. There's ample reason why US officials on both sides of the isle are wanting to dig into the details about Russia. It's got very little to do with the DNC/Killary hacks and more to do with Trump's proxy connections to Moscow.

I'm tired of having to re write this stuff over and over again. So here is a short itemized list of details that no one can deny.... Unless your, blind, ignorant or stupid.

Attorney General Jeff Sessions. He met twice with Russian ambassador Sergey Kislyak. That's a fact. He also chose to recuse himself from anything involving an investigation into the Russian connection.

Secretary of State Rex Tillerson. He ran this little (humongous) oil company called Exxon Mobile. Or maybe you aren't familiar with it? Exxon also is a partner company to another called Rosneft. The majority controller of Rosneft is the Russian government. The president of Rosneft is a man named Igor Sechin who also happens to be a personal friend of Rex Tillerson.

Sechin is a close friend and a Russian official. He's in Putin's tightest circle and answers directly to him.

Exxon also has deep ties to an equally large Russian government owned energy company called Gazprom. The Company’s share in the global and Russian reserves amounts to 17 and 72 per cent respectively.

Our pal Michael Flynn. Flynn resigned because of his lies regarding his multiple vists with Sergey Kislyak.. Also, while he was director of the DIA (Defense Intelligence Agency) he visited the Russian GRU headquarters (Main Intelligence Directorate... people that control the Spetsnaz). He also accepted money to appear on the Kremlin backed propaganda wing of Russia we all lovingly refer to as RT News.

Carter Page. He met with top managers from both Rosneft at their headquarters in Moscow and Gazprom. He also met with our old buddy Sergey Kislyak! That dude gets around, doesn't he?

Former campaign manager Paul Manifort. He has so many Russian and former soviet connections that it's just easier to put up a Politico graphic because I'm growing tired of explaining this crap to a group of willfully ignorant Trump supporters who refuse to see the shadiness of Mogul's connection to our biggest adversary in the world. 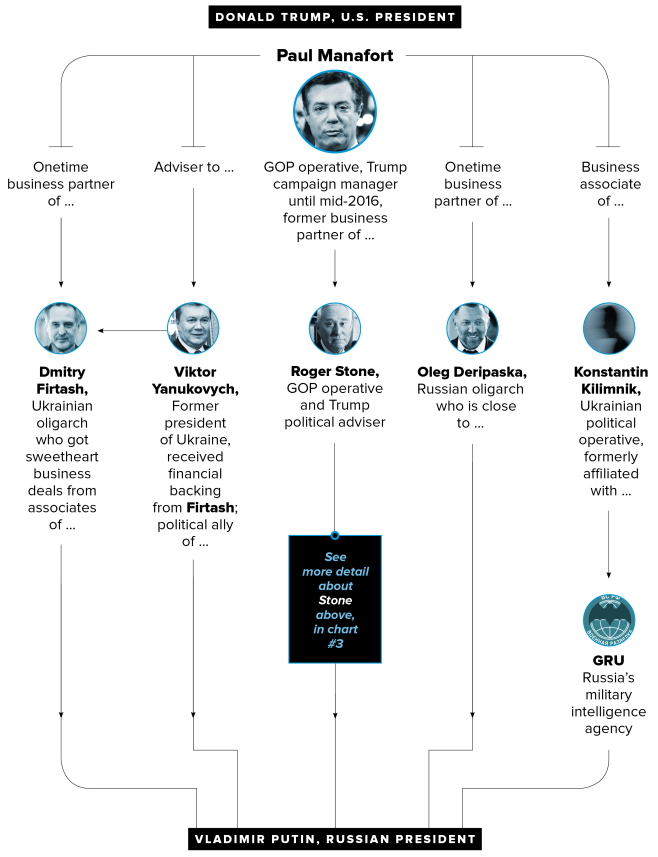 Donald Trump. How quickly we forget the Miss Universe pageant he hosted in MOSCOW in 2013. He's acquainted with the president of the Russian American Chamber of Commerce, Sergei Millian who also is supposed to be the lynch pin to the dossier that accuses now President, Donald Trump, of being involved with Russian prostitutes. Oh yeah! His name was provided as a source to the FBI in the dossier copy they received.

The Trump Organization itself has an interesting bank. The Alfa Bank, the largest private, commercial bank is where? WHERE IS IT LOCATED, TRUMP SUPPORTERS???? Oh, yeah.... RUSSIA.

Felix Sater. Trump's business associate who was prosecuted and pled guilty to stock fraud in a schem that involved the Semion Mogilevich arm of the Russian Lyuberetskaya crime group in Moscow... AKA the Russian mafia. His not so friendly 'friend', Sal Lauria, an ex Italian mob affiliate turned informant for the FBI, brokered a 150 million dollar deal between Sater and the FL group. FL Group is a hedge fund in Iceland tied to Vladymir Putin. The fund backs Trumps Soho projects..

Interestingly enough, Sal Lauria has filed a lawsuit against none other than Attorney General Jeff Sessions for review of a 2015 case regarding his legal residency in the US AND illegal fact finding, and torture during a 2004 RICO case which he was involved in. Probably the one that caused him to flip.

Sater is also tight with Dmitry Firtash, a Ukrainian oligarch tied into Putin and also friends with? Donald Trump.

So... Any of you want to come preaching this bull crap about the Russian connections being meaningless? The FBI is connecting the dots. It would be wise for you lot to keep your mouths shut and stand by. You can celebrate after teh investigation is over. As of now it's still very much ON GOING.

Politico
Salvatore Lauria
How Trump Became the Russian Mafia's Bitch
edit on 11-5-2017 by AnonyMason because: corrected mistake of Exxon parent to partner company with Rosneft

I preferring Russian ally to Saudi. I don't drink coffee if you can believe that.

You don't have to drink it. I just want you to smell it.

posted on May, 11 2017 @ 09:51 PM
link
What do the Liberals have against the russians in the first place? They apparently want and love communism but they hate Russia the birthplace of communism. This makes no sense. What's up with that?

Not afraid of Russia. I mean, they have nukes, they have a stout and well trained military, epic level cyber divisions, and helped the Brits write the book on how to spy...

I'm more concerned with an attempt to muck about with our Constitutional Republic.

It's kind of a big deal that Trump's pals during his campaign and transition have been fingered for having shady dealings with Russians, eh? Or is that too difficult for you to understand?


It's kind of a big deal that Trump's pals during his campaign and transition have been fingered for having shady dealings with Russians, eh? Or is that too difficult for you to understand?

Versus shady deals with SA? Pot and kettle stuff. End of the day, it's simple that we are re-organizing our allies. How exactly will that pan out? IMO better than it has in the past.

Some really crappy facts:
Anyone attached to the current administration will probably profit in a few different fashions. As it has been for the last hundred years or so.

Also, I don't think Exxon is the parent of Rosfnet unless you have better sources than I've seen.
Kislyak is a Russian Ambassador, that is why you see him so often.

First of all, again, I'm not a liberal. You guys keep barkin up that tree and I keep correcting you.

Second, Republicans hated Russia for about 70 years or so. Reagan reached out to Gorbachev and smoothed things out quite a bit. The Iron Curtain fell but soon after the same old tricks were turning in the same old place. Rodina (that's Russian for "motherland").

Within the last few years Republicans have started to shy away from hating on our acquaintances in the Kremlin. It's beyond bizarre.

Over simplification of complex problems. Also, total dismissal of the fact that no less than three of Trump's people resigned because of Russian connections that they lied about. Flynn, Manafort, Page. Sessions recusal of himself did very little to alleviate suspicions.

posted on May, 11 2017 @ 10:02 PM
link
The truly funny thing about all the leftist Russophobia is that Bill Clinton's wife has "met with" Russians more times over than years than just about anyone.

Not afraid of Russia. I mean, they have nukes, they have a stout and well trained military, epic level cyber divisions, and helped the Brits write the book on how to spy...

I'm more concerned with an attempt to muck about with our Constitutional Republic.

It's kind of a big deal that Trump's pals during his campaign and transition have been fingered for having shady dealings with Russians, eh? Or is that too difficult for you to understand?

Let me put this into words that even the dumbest of Leftists might understand -
Businessmen sometimes do business on a global scale, and that might even include.......OMG RUSSIA!!!
edit on 11-5-2017 by RazorV66 because: (no reason given)

If Killary was POTUS I would have plenty of material to write about for that bitch.

She's not, though. We aren't operating with "if".

dont you know any Trump criticism or inquisition on ats automatically make you a "libtard who's triggered".

conspiracies are interesting and welcomed, just not when Trump is involved

Except it's not. SSDD, or different admin if you will.

With the exception of Flynn, both were forced to resign long before the election. Session recusing himself was the right thing to do, is that up for debate?

No not really. Obama paved the way and he is even on the record. People are obsessed with going to war with Russia. They blame them for everything. F#ck i missed my bus damn russians. F#ck Starbucks has no more double espresso mocca latte damn russians. F#ck i bleachbit classified documents damn russians. The warmongering of the tolerant Left makes no sense. They claim to be anti-war and at the same time they beat the war drums like maniacs. They have completely lost it. They should better focus on finding a better candidate than the Leprechaun.

Let me put it into words even the dumbest Trumpkin can understand: If the President or his people have connections to the Kremlin, Semion Mogilevich's family, the Lyuberetskaya, or Russian loyalist oligarchs that's a conflict of interest for the President of the United States.

Sure it is. Session's self recusal was because of his contacts with Sergey Kislyak.

The fact that Manafort and Page resigned before the election means very little when both resigned over suspicions that they were also talking with the Russians.

If Killary was POTUS I would have plenty of material to write about for that bitch.

She's not, though. We aren't operating with "if".

Fair enough. But Trump is POTUS, and so far, I have seen jack-squat to indicate he conspired with "the Russians".

If there were such evidence, not only did Obama fail to use it against him before the election, so did Bill Clinton's wife, who would have presumably had access to it.

I have read through your "evidence" and found it either unsupporting of your claims, unprovable, or nebulous at best.

Go ahead and save this post and you can toss it back at me if I'm wrong, but Trump will be sworn in for his second term on January 20, 2021 unless he loses in a legitimate contest.

No ties between "the Russians" and Trump will ever be established.

This is all a bunch of horse s#|t.

posted on May, 11 2017 @ 10:15 PM
link
Innocent until proven guilty. Let me know when Trump is brought under charges. Until then. Keep speculating and creating innuendos.

I will glady keep reading. Enjoy.

By the way both sides are corrupt. Just because the Trumpster is in the white house doesnt excuse the rest of the lot from the same priveledges of being looked into also. None of them are loyal to the people.