Is This China's New Drone Bomber?

Sorry for the title caps but that's how the website has the title.

I'm not sure what to make of this one. So China has a new drone that can sneak up on a ship and launch a torpedo attack? Skimming over the water at 4 feet?

Sounds like vaporware to me. But I'll let someone else comment. If they think this is at all possible.

PICTURES have emerged claiming to show a new top secret Chinese weapon that the country is said to be developing.

The unnamed aircraft is able to avoid radar detection by flying extremely low over water, according to a post on Weibo, the Chinese equivalent of Twitter.

Undetected, the craft – allegedly a drone – is said to be able to sneak up and carry out devastating torpedo attacks on warships.

The picture appears to be part of a brochure containing information about the mystery jet.

According to Sina, the “drone” can operate at as little as a metre (3.2ft) above sea level.

It can also carry up to a tonne of aerial torpedoes, the report claims.

The craft is said to be the latest member of China’s military “Rainbow” or “CH” drone series, developed by the China Academy of Aerospace Aerodynamics. 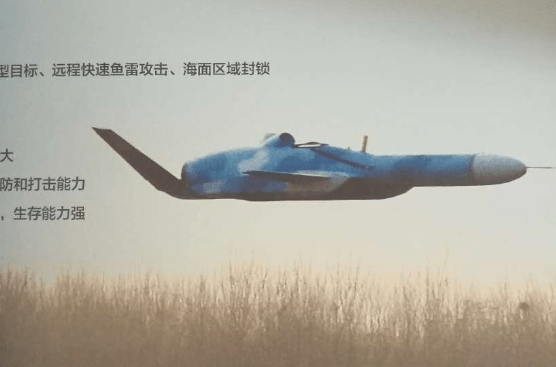 here is link to the chinese site.

Mod Note: Please refrain from all caps in the title, even if the sourced web site uses it.

posted on May, 11 2017 @ 06:58 PM
link
I'm sure Zaphod will be along, he's sure to know. It looks pretty strange. Maybe the elongated nose helps with low altitude aerodynamics?

I wonder if they are based on the ones Iran has

posted on May, 11 2017 @ 07:10 PM
link
I would think by now the US military has had something in line of this for quite some time. My great fear with drones are the "suicidal" drones with chemical weapons on them that would be launched within range of US's mega warships.
The world is really getting to be a dangerous place to live in anymore.

This is no different than any other sea skimming cruise missile. It isn't stealth by any means and it really doesn't matter how close to the water it flies, it can't go undetected to ship borne radar systems.
3.2' above open ocean water is ridiculous. One large wave, and it's gone.

Seems like another one of those super-duper weapons that are going to, again, render CBG's "obsolete".

It is amazing that with all these carrier killers out there, everyone with the ability to, is working like crazy to build their own carriers.

China building at least one. The royal Navy just commissioned one. Russia, of course, has one--it breaks down a lot, but still. India.

I don't think there's anyone else...I know I'm forgetting someone.

Clear evidence of their obsolescence.

Indeed. Time will tell if it's going to be able to compete in the real world.

Four feet? For the entire flight? I have trouble believing that. As Sam pointed out, one unexpected wave and there goes your weapon. For the terminal phase maybe.

Even sea skimmers have problems defeating new radar systems. Airborne and shipborne radars are really really good now. Almost any ship that would be operating in the area is going to have an AWACS overhead. If this is designed to go against carriers, they're going to have E-2Ds, with the new AN/APY-9, which is currently one of the most capable airborne radars out there.

It won't be easy to defeat, by any means, but it's no wonder weapon heralding the end of the carrier. I'd be far more worried about the DF-21 than this.

I agree. ground effect and 1 meter height from the water. sounds sketchy.

What do you think about it carrying 1 ton of torpedos?

It sounds more impressive than it is. The US uses the Mk54 for its aircraft. It's the lightweight version of the Mk48 used by ships and subs. It weighs in at just slightly over 600 pounds. So it would be able to carry 3 equivalent weapons. They could go lighter and get more, but it's diminishing returns at that point. You get more, but less damage in return.

posted on May, 11 2017 @ 11:16 PM
link
I know it's just me but for some odd reason every time I look at this thing it males me think of Irans' quher F-313. I know they are not really that similar but it's what jumps to my mind. seems like if this thing flys at one meter just put mines ( floating Tank mines?) in front of it to "splash" it. At that height, it is not going to be able to bank left and right very much to "jink" out of the way.

posted on May, 11 2017 @ 11:57 PM
link
a reply to: Zaphod58
I dont think its carrying individual topedoes, it is gev cruise misslepedo thingy.
That is not going to sneak up on nothin, the spray trail kicked up will light up like a x mas tree.

posted on May, 12 2017 @ 12:13 AM
link
Looks like some cgi chimeara from thirdphaseofmoon. But i have no doubt the chinese actually built something that silly looking.

Wonder how it stacks up against our latest drones

Hows the df21 going to target our carriers these days?