A Crafty Bit of Upcycling: My Jacket Gets An Upgrade

I hope this is the correct location for this discussion. If moderators feel otherwise, they may feel free to move this thread with their usual sound judgement as to its correct placement. However, for now, here goes!

I am, as I have alluded to on several occasions, a metalhead. Although it is not mandatory, it IS customary for a metalhead to have a second skin, a garment which is meant to be festooned in patches naming their favourite bands, badges, and other assorted stuff. As a dedicated metalhead, I am no exception. I have had a jacket with patches on, not to mention many split back studs, for quite some time.

I have recently modified my jacket, with some spare materials I happened to have lying around, and thought it might interest some of you, to see what I came up with. 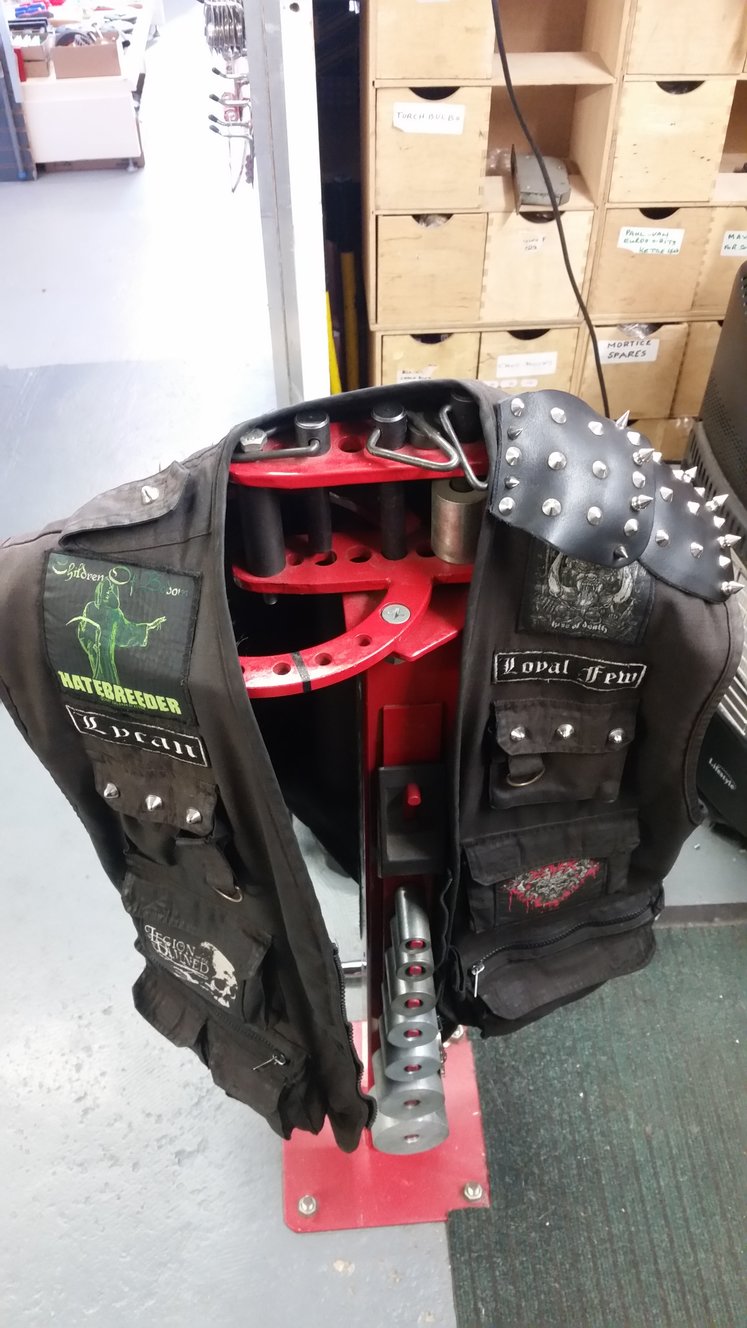 As you can see, it is a layered, studded shoulder made of leather. What you may not necessarily see, is where the leather came from. To be honest, I was not sure that it was going to work out too well, so I did not make photographic record of the process, which in hindsight was a little stupid.

The leather, and the shallow studs in it, came from a pair of gauntlets which I have had for an absolute age, but rarely wear. They were uncomfortable, badly designed, bent in all the wrong places, and generally were a bloody nuisance from the get go. They were one of those purchases which made me think ill of my younger self, who was responsible for their being purchased in the first place. The specific section of the gauntlets I used, were the parts which covered ones fist. These were cut from the main body of the gauntlets with a craft knife, which made it possible to place them on the jacket in various configurations, in order to ascertain the best placement.

Then I used some screw backed, crimped studs to screw the two pieces together. These studs came off several other bits of old rubbish that I had, gathering dust in my collection. I used a hardened steel probe to pierce the fabric of my jacket, to create holes, through which yet more screw back studs could be added, to attach the leather segments to the jacket. I had to hammer the leather and fabric in order to permit the small screws to lock up into the threaded receivers in the studs themselves, because the uncompressed leather and fabric combination was too thick to allow this to occur, all of which I learned by way of trial and error.

All in all, the project involved no new materials, just stuff I had laying around that I had not touched in years.

Now, this might not be everyones cup of tea, and I totally understand that. But it DOES show that in order to make an interesting change to a garment, one does not have to have lots of new equipment, materials or even a needle and thread. Sometimes, you can just bodge it, and have it work out.

Let me know what you think!

posted on May, 10 2017 @ 11:31 AM
link
I think its awesome. Totally sport that while riding a hog around town. Or to any concert that would be visiting.

From an old early 80's, Priest and Maiden Metal Head.

I have to admit though, in my later years, I have come to appreciate other forms of music.


But after many years she has become a staple in my heart.

Karen Carpenter, RIP, you had the voice of an Angel.

Rob Halford, yo are the rock GOD! But Karen, you hold a place in my heart I am not embarrassed to acknowledge

posted on May, 10 2017 @ 12:51 PM
link
Seeing someone in a jacket like this coming toward me would make me either cross to the other side of the street or get out my pepper spray, probably both.

Show us the back if you do it. Maybe you can stencil something huge on the back.

Please take it easy at those concerts 😕

posted on May, 11 2017 @ 01:30 AM
link
Well aren't you the clever and creative one! Well done my British metal head friend! How long did it take you to complete? How many cuss words did you have to use while making it? LOL

Well, this is the back, previous to the addition of the leather shoulder: 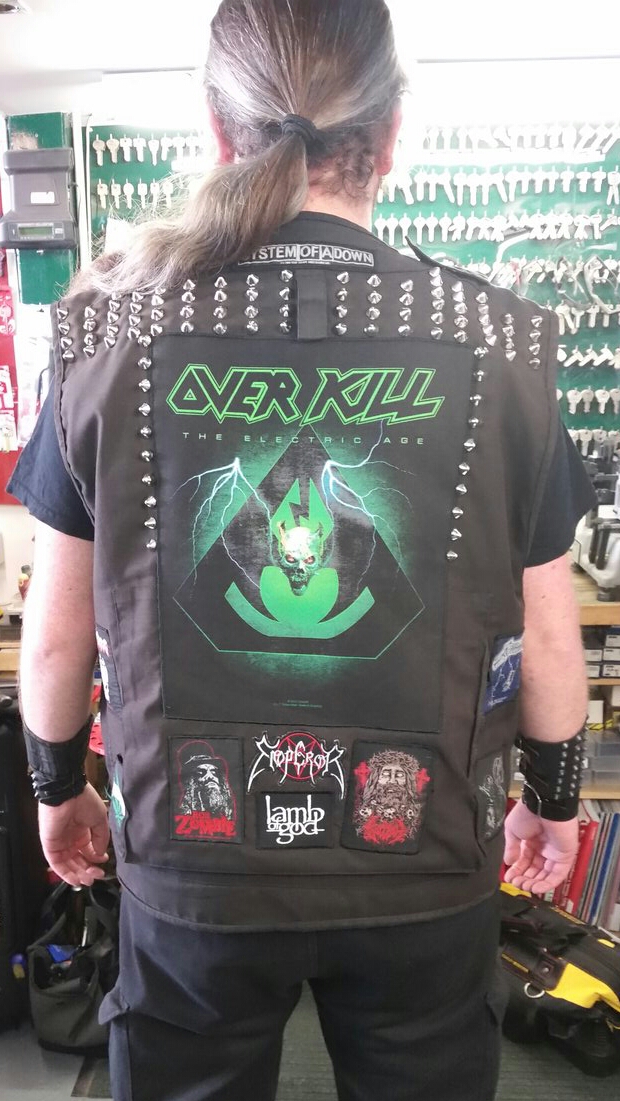 It is worth pointing out, by the way, that this jacket, although I love it, is built like a shanty shack. By that, I mean that nearly none of its elements are squared away and equidistant, which is why the studding is not entirely symmetrical.
edit on 11-5-2017 by TrueBrit because: added detail.

You must be some hell of a shot with your pepper spray to use it from the other side of the street! I am impressed!

Git! No one must knooooooow! *chortle*

The thing took longer than it needed to, but only because I had never used screw backed studs before, never worked with leather before, and because so much of it was literally experimental. If I was doing it again, absent the experimentation element, I could probably get the process down to about half an hour or so I think, if I was really working fast.

As it was, between working out the best approach to use, figuring out placement and screw positions, not to mention finally working out that the material would need to be compressed in order that the screws actually lock up into the studs, the shoulder took about half a working day to figure out, obviously with customers to deal with in between times. I started about eleven in the morning, was done by right around three thirty.

posted on May, 11 2017 @ 04:38 AM
link
That's a tactical vest of some description is it not? I've been looking for something similar to carry my patches instead of the old denim that fell apart as the charity shops round here have been a bit dry in the denim jacket department. You can't find an old Lee or Wrangler or anything similar these days.

Originally I wanted to find a cotton battledress, UK style like I used to have in the late 80s. It was dyed black for POW's with the difference that it had a rising sun flag stitched to the back panel and some screen printing on the front lol.

The trouble with all the tac vests I have found is they are all over the top paintball rambo jobbies with way too many pockets and d rings etc. Where did you get that one from TB?

This is actually not a tactical vest, although I have an L.A. Swat style assault harness which I use to carry my personal belongings and valuables at festivals.

The base for my battle jacket is a Highlander Multi-Purpose Waistcoat, or at least that is what the tag in the back of it says. Its 80% Polyester, 20% Cotton, and has a boat load of pockets. There are ten pockets on the external skin of the jacket (some of the pockets literally have pockets on them) , including one really large one in the back. There are four further pockets on the inside skin, two of which are zip up ones in the chest area, and the other two being lower down, near the belly area.

I have two of these jackets, one of which has become my battle jacket, the other of which is my working jacket. Having tested the platform in both leisure and work environments, I can tell you that they are a comfortable, practical and versatile garment, which would be just as at home on a hiking trip as they would be on a job site, that the jacket will stand up to wear, and is relatively easy to modify, should the mood take you to do so.

posted on May, 11 2017 @ 05:14 AM
link
Ah I can see it now, it's like the John Wilson fishing waistcoat from years ago but in black. I feel a trip to army surplus coming before download and bloodstock. I realy can't face hours of sticking patches on my old Lewis cut off which was the other option. Stitching patches to leather sucks

Hehe! It certainly does!

Interesting that you mention Army surplus... I got my first Highlander vest at the charity shop across the street from me, and that is the one which became my battle jacket, metal vest, whatever you call it. The one I am wearing right now, being at work and all, I bought from the Army and Navy surplus store a few miles from here!

Working with leather is a pain, literally...so hard to get a needle through.
I have redesigned a couple of jean jackets in the past, doing one with leather accents and the other with lace.

I've noticed that nobody in town sells patches anymore, not even band related stuff.
I learned how to make a pair of jeans look worn (holes with the white threads showing, not just an opening) and want to find some hippy inspired peace sign and rock band patches.

It's great when you can make something unique! One-of-a-kind items are popular and easy to sell too, so maybe you could even get a little side business going.