My personal thoughts on California.

posted on Apr, 23 2017 @ 09:44 AM
link
Mods before I begin I would like to put this as part of Dissecting Disinformation due to widespread beliefs that California is a place full of beautiful women, beaches, national parks, land marks and Hollyweird and I want deconstruct that popular image that Hollyweird brought out.

Note: I am not attacking liberals but the liberal coastal elite and regressive leftists.

Anyways, California a magical place to many from all over the world due to the influence of Hollyweird. People came here to experience the magic of California.

However, behind the glitter and glamour of Hollyweird and California lies a very ugly side.

First off, all over California there is an ongoing class warfare. Many working and middle class in LA are forced out of their homes due to rising costs in not just their homes but also communities. People who lived in their neighborhoods for generations are now forced to move out because not only are affordable homes becoming expensive but also the daily necessities.


Highland Park, a traditionally working-class neighborhood dominated by Latino families, has been upended by gentrification. Boutiques have moved in, craft beer flows and homes are flipped regularly. In fact, even before the Great Recession, Highland Park was a fairly regular location for TV's Flip This House. The question, of course, is what happens to the families that have lived, owned and rented there for decades.

The new residents tend to be upper middle class to upper class liberals and this angers a lot of people.

Due to the majority of middle and lower class being ethnic minorities in Cities like LA and San Francisco, many of them associated it with them being kicked out because of their race. 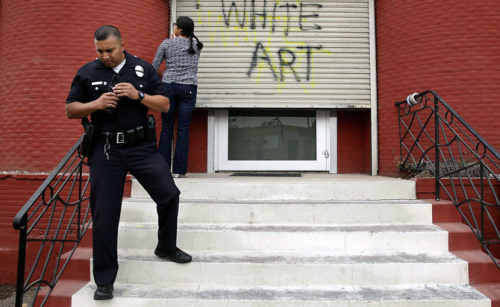 While gentrification is an issue that effects every race, I do understand why they say it's a racial issue.

Some of the worse racists actually came from Wealthy White Liberals themselves. I remember a friend from Guatemala told me one time that Beverly Hills residents tend to have a disdain for brown people due to an incident where his dad was being looked down upon when he walked in a Beverly Hills neighborhood.

Rising costs in LA also forced lower and middle class to move out of the interior of the city and onto the outskirts of the main city where they have to commute or drive long distance just to go to work.

Other problems include finding a job. I know some of you ATSers say that people who can't find a job are lazy and that they need to find a blue collar job but that is not an option in California.

Most jobs tend to be Hollyweird related, Tourism, and IT stuff and believe me it is very hard to find a job there unless you have a degree and special connections.

Due to this, many working and middle class folks looking for a job are forced to move out in places outside of the main cities and in some cases out of state.

Gas prices in California are also a problem due to high costs of taxes. The average here is 2.50 per gallon though where I live it (LA) it's 3 dollar something.

As a result it's cheaper to commute.

Another problem I have with California are Universities. While yes Universities are a place for learning,here it has become a place dominated by the Regressive Left and they indoctrinate students to fulfill their agendas. As result you have incidents like these:

In UC San Diego you have a student support Radical Islam in front of an audience:

Oh and to be a professor, you have to either tow the line or lose your job.

I had one incident where a professor (Keep in mind this is in an Ultra Liberal College) who is not a conspiracy theorist and hated Trump admitted that the Universities are dominated by the Liberal Coastal Elite and that they are pandering to minorities, have a disdain for working class whites and engage in political correctness. However, he told me if he openly expressed his views he'll lose his job.

I have another professor who told me if he was caught teaching students about the dangers of Radical Islam, he'll lose his job. What's interesting is this professor had first hand experience with Radical Islam when he was in Iran during the Iranian Revolution and narrowly escaped death when the Ayatollah's men was hunting him down.

Why people don't want to move.

Now despite these problems, there are those who refused to move.

Part of it has to do with family living here, regional loyalty, job, living near Hollyweird (My guess is they don't want to leave the glamour) and not wanting to take a risk.

However, there are some of us (Atheists, Gays, Lesbians, and Ethnic minorities) who don't want to move to places like the Mid West and the South due to perception that it's full of KKK and Homophobic Christian Fanatics and this is a courtesy of Hollyweird.

Personally, while I am not denying there are problems in other states I believe the Liberal Coastal Elites blew it out of proportion via Hollyweird propaganda as a way to do the age old strategy of divide and rule.

Anyways this is my thoughts on California. Any California residents in ATS or was a former resident is free to post their experiences and problems with California.

I always thought California was a sandwich..


When you have a state with such a large population and so many different races and cultures trying to blend together, well you will have some issues.

Couple that with so many social program costs that require high taxes creating a have and have not situation among the people.

I'm surprised you don't have more issues out there.

California is a great place. Much nicer than New Jersey.

I always thought California was a sandwich..

Funny I always thought California was a Hotel. I guess we are all just prisoners here of our own device".

Only if you can afford it in places like LA.

It is now becoming the domain of the Liberal Elite and those who can afford it.

Where do you live?

Do you or have you lived/worked in CA?

I live in Los Angeles. I also went to other parts of California like Lake Tahoe, San Diego, Santa Barbara, and San Francisco.

Just letting you know, there are some of us who are disenchanted by life in California and have plans to move out of the state.
edit on 4/23/2017 by starwarsisreal because: (no reason given)

California is a great place. Much nicer than New Jersey.

CA is a very diverse state. And its not a blue state - - it's a purple state.

Hollywood (a small section)? Is pretty much a myth these days, business wise with modern equipment - - studios aren't needed - - and its less expensive to film elsewhere.

Does it have a "Live and Let Live" attitude? For the most part.

. In fact, even before the Great Recession, Highland Park was a fairly regular location for TV's Flip This House.

I have to confess.

My personal thoughts on the peoples republic of California ?

I just thank GOD I live so far away.

posted on Apr, 23 2017 @ 10:29 AM
link
Responding only to your concern about KKK presence, according to the Southern Poverty Law Center, there are 130 currently active groups associated with the KKK - in EVERY state of the U.S. - including TWO in California.

I do have to have to say that Hollyweird no longer produced a lot of great caliber TV shows and Movies anymore though like the ones in the past.

Now most movies are remakes and sequels and a lot of TV shows are showing trash like Keeping Up with the Kardashians.

originally posted by: starwarsisreal
a reply to: Annee

I live in Los Angeles. I also went to other parts of California like Lake Tahoe, San Diego, Santa Barbara, and San Francisco.

If you live in Los Angeles, then you know how competitive the market is for land, jobs. etc.

You want to stop Progression?

Like all those Good Old Boys who want to follow in their daddy's footsteps - - living where they grew up - - doing the same job their daddy's did, etc.

Now most movies are remakes and sequels and a lot of TV shows are showing trash like Keeping Up with the Kardashians.

Reality shows are cheap to make.

It's about the money. Anyone who thinks Hollywood is about a few Liberal Actors expressing their views, doesn't know Hollywood.

The problem is a lot of us want at least proper compensation for our losses.

You should look up Chavez Ravine. Many residents there were screwed over when they created Dodger Stadium.

They weren't given proper compensation.

I understand the need for change but it needs to be gradual and smoother.
edit on 4/23/2017 by starwarsisreal because: (no reason given)

originally posted by: starwarsisreal
a reply to: Annee

The problem is a lot of us want at least proper compensation for our losses.

You should look up Chavez Ravine. Many residents there were screwed over when they created Dodger Stadium.

They weren't given compensation.

I under stand the need for change but it needs to be gradual and smoother.

I was born in a trailer park in Compton. I'm native.

Yes, I know those areas. You don't go there after dark. And probably not a good idea to go there during the day.

Interesting that you're complaining about Gentrification and Liberals in the same breath.

posted on Apr, 23 2017 @ 10:34 AM
link
There are some great and beautiful parts of California I love. There are also some absolute arm pits that are totally disgusting and putrefied. Like San Francisco and LA and Hollywood. For those who have never been to Hollywood it is one bizarre and f'd up place. You can just feel the negativity permeate the air in that town.

The general liberal mindset across California is one I am happy I do not have to deal with on a daily basis.

As far as Berkley in concerned it is a breeding ground for fascism. What does it say about an institution of "higher education" that they cannot teach their students the definition of fascism? Their very actions are a complete contradiction to their message.

Let's not forget THE WALL started as Operation Gatekeeper in good ole liberal California. Funny how they call the rest of the US racists. So typical of liberals.