posted on Apr, 21 2017 @ 03:31 PM
link
Venezuela just began nationalizing US assets. I think we should all remember who really rules the US - the mega banks and mega corps. And none of them will be thrilled about the theft of their assets. I expect that Venezuela may take a front seat on the new world war splash mountain.

“Yesterday, GMV’s (General Motors Venezolana) plant was unexpectedly taken by the public authorities, preventing normal operations. In addition, other assets of the company, such as vehicles, have been illegally taken from its facilities,” the company said in a statement. GM went on to call the actions an "illegal judicial seizure of its assets."

It seems like the government hawks have been itching to get into Venezuela for a while, but haven't had an excuse the public would buy. If the MSM propaganda machine starts into Venezuela in the next couple weeks, I think we'll know where it will be headed. Venezuela is as weak as ever, has large oil resources, and has a population that has been put on rations of food and power.

So, what does Venezuela have to say about all this? Well, they blame US corporations for all the problems they created through gross mismanagement, and are generally remaining quiet to their own citizens.

"The government’s narrative is that there is an economic crisis in Venezuela ... because they’re in an economic war with business. — David Smilde, a Venezuelan expert at Tulane University"

Venezuelan officials did not respond to requests for comment about why they seized control of the plant. News of the seizure was not widely covered in the Venezuelan press, although a newspaper in Valencia said authorities may have frozen GM’s Venezuelan bank accounts along with taking its property.

While it's hard to say just exactly how Venezuelan citizens view things, I have to think that the majority of them, even many that originally voted for Maduro, are none too pleased with bread lines and a never-ending energy crisis.

Venezuela has been swept by the fiercest protests in years since April 4, when the Supreme Court announced it had stripped the opposition-controlled Congress of its powers. The domestic and international outcry was so intense that some of those powers were quickly reinstated, but the street demonstrations have continued, with tens of thousands of people taking to the streets Wednesday with signs that read “Maduro out” and “Down with dictatorship.”

It looks ripe for regime change to me. What's WWIII without including South America anyhow? (/s)

If our congressman actually represented citizens, our soldiers and taxes wouldn't be needed for companies assets abroad.

If your company does business abroad, you know the risks. Sorry but not on our soil, not our problem.

CIA fixed that place real good too. Its been a mess ever since...

They're socialists, so it's cool. It's going to the people.

CIA fixed that place real good too. Its been a mess ever since...


They certainly did their part, and have interfered here and there in Venezuela for a while. They are hardly the reason it melted down though. That's all the Maduro government.

@criticalstinker Oh for sure, but we all know that's not how America actually works.

posted on Apr, 21 2017 @ 04:10 PM
link
Meanwhile the Venezuelan government is killing people in the streets.

All the while people around the globe politicise it all.

They ALL knew what that country was like, and chose to do business there.

War to bail them out ?

posted on Apr, 21 2017 @ 04:15 PM
link
Venezuela has been seizing major corporation assets for a while now. I fail to see why GM would be special.

I do agree that Venezuela could devolve into war though ... internal civil war sadly enough.


Venezuela has been seizing major corporation assets for a while now. I fail to see why GM would be special.

That one is a special case since that came out our pocket with the bailouts by the last administration.

Then the US/CIA intervenes and install a military dictatorship like during the Cold War.

posted on Apr, 21 2017 @ 05:03 PM
link
Another failed socialist experiment that the world is going to have to go in and clean up after.

Could this work in favor of Trumps bring American jobs back campaign?

posted on Apr, 21 2017 @ 05:13 PM
link
According to fake news MSNBC and unhinged Maddow, the unrest in Venezuela is Trump's fault. 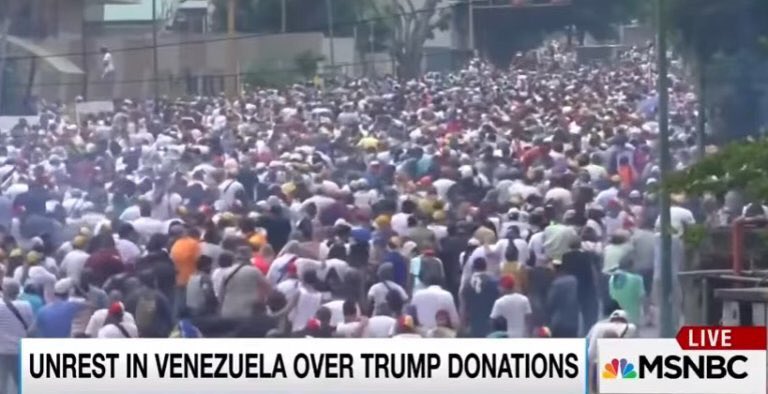 That's not because of Trump. They just heard that someone was sharing out portions of the last flamingo.

originally posted by: Deny Arrogance
According to fake news MSNBC and unhinged Maddow, the unrest in Venezuela is Trump's fault.

MSNBC sure does love to lie.

Venezuela was imploding even before Chavez died.

originally posted by: Deny Arrogance
According to fake news MSNBC and unhinged Maddow, the unrest in Venezuela is Trump's fault.

Somebody should sue MSNBC for fraud. They keep telling people they're a news source.

posted on Apr, 21 2017 @ 09:12 PM
link
I wonder if it's tax-related. Big corps are known for avoiding taxes using loopholes. I could see the Venezuelan Government seizing control due to unrecoverable tax revenue.

They are socialist, right? Maybe they are keeping it quiet because they are bribing GM.

posted on Apr, 22 2017 @ 03:24 AM
link
No one is going to go to war with Venezuela. The place is a mess and a good example of the corrupt and poor government. Soon, God help them, someone will take control and shake it all up. The place is a joke.

Ever talk to anyone who has owned a buisness in Mexico?,same deal government will end up taking it over if your not a citizen,thats how communism works,know many who found buildings wrapped in yellow tape,all you can do is leave,before they wrap you up too


Yes they want the rare earths and the mineral rich regions.