Ancient stone carvings confirm how comet struck Earth in 10,950BC

page: 1
81
<<   2  3  4 >>
log in
join
share:
727Sky
+42 more
posted on Apr, 21 2017 @ 09:41 AM
link
For those who are familiar with his speeches and books Graham Hancock has been pushing there was a comet impact that destroyed the mega fauna at just about the same time the carvings on a stone at Gobekli Tepe called the vulture stone has now revealed. The vulture stone has depicted constellations and by using a computer on their location and the comets dated impact they arrived at the date of 10,950BC which also falls very accurately with what Hancock has been saying. Not trying to Rah Rah Hancock but if the guy was right even though his methods of deduction were different, well he was right. Also the comet was fragmented so different parts impacted in different areas which many believe was responsible for the The Younger Dryas cool down and ice age.

Ancient stone carvings confirm that a comet struck the Earth around 11,000BC, a devastating event which wiped out wooly mammoths and sparked the rise of civilisations.

Experts at the University of Edinburgh analysed mysterious symbols carved onto stone pillars at Gobekli Tepe in southern Turkey, to find out if they could be linked to constellations.

The markings suggest that a swarm of comet fragments hit Earth at the exact same time that a mini-ice age struck, changing the entire course of human history.

Dr Martin Sweatman, of the University of Edinburgh’s School of Engineering, who led the research, said: "I think this research, along with the recent finding of a widespread platinum anomaly across the North American continent virtually seal the case in favour of (a Younger Dryas comet impact).

About 12,800 years ago when the Earth was warming and emerging from the last ice age, a dramatic and anomalous event occurred that abruptly reversed climatic conditions back to near-glacial state. According to James Kennett, UC Santa Barbara emeritus professor in earth sciences, this climate switch fundamentally –– and remarkably –– occurred in only one year, heralding the onset of the Younger Dryas cool episode

"Because these three sites in North America and the Middle East are separated by 1,000 to 10,000 kilometers, there were most likely three or more major impact/airburst epicenters for the YDB impact event, likely caused by a swarm of cosmic objects that were fragments of either a meteorite or comet," said Kennett.

So both the dinosaurs and wooly mammoths died from comet/asteroid impacts. Fascinating find - are we overdue for another one of these events?

Or. It was collateral damage from the demise of Atlantis. Ba-zinga!

posted on Apr, 21 2017 @ 10:10 AM
link
I'm in a particularly enlightened mood this morning *wink wink*. So I'm sitting here and just imagined a scenario where an advanced space faring species could use asteroids as weapons leaving no technological foot print. If they had the ability to manipulate the trajectory of an asteroid with some sort of gravitational device (think tractor beam) they could tow a space rock and slingshot it at a planet, can you say "deuces earth creatures". Not saying that that is what happened but who knows in a universe filled with countless possibilities and scenarios.
edit on 21-4-2017 by RainbowPhoenix because: (no reason given)

Evidence comes from the analysis of an ice core pulled out from a layer of ice in Greenland dated between 533 and 540 AD. The core contained huge amounts of atmospheric dust, not all of it originating on Earth. The dust had high levels of tin, which is characteristic of a comet. Since it was deposited in the Northern Hemisphere spring, researchers believe it came from the Eta Aquarid meteor shower, which is associated with Halley’s comet.

But that is not all they found. Within the ice core were also tiny tropical marine organisms, suggesting that the comet fragment landed in tropical ocean and blasted the organisms all the way to Greenland.
- See more at: www.ancient-origins.net...

Also if most people really knew just how much junk was floating around they might be surprised we are not hit more often.
www.abovetopsecret.com...

Blinking is still used to detect the near earth objects (NEOs) that we have been able to detect. Pretty good video of the last one that blew up over Russia and people getting knocked off their feet and hurt with flying debris.
Objects over 1/2 mile wide astronomers now claim they have found approximately 95% ...Margin of error?

However there are 10,000 lesser objects we also know about.. It is pointed out in this video that the 10,000 they claim to know about in reality is about 1/2 of one percent guesstimated; in other words over one million are actually NEOs. Some pretty good graphics of the solar system so the video is worth a look IMO. Surprised we are not hit more often; just goes to show space, the final frontier is big with allot of space err room.....

With all the spectacular meteors we have had this year and the ATS threads about the events there might be some who are interested and enjoy the vid.


About 12,800 years ago when the Earth was warming and emerging from the last ice age, a dramatic and anomalous event occurred that abruptly reversed climatic conditions back to near-glacial state....

...The vulture stone has depicted constellations and by using a computer on their location and the comets dated impact they arrived at the date of 10,950BC which also falls very accurately with what Hancock has been saying.

indeed, there is a 150 year window there

But ---> i just do not understand the stone carving from at Gobekli Tepe being made at all, as the state of civilization back then did not communicate on such a grand and instantaneous manner...
so how would a small singular event such as a Boloid explosion event become of such importance

i think active minds are stretching the factoids to fit a theory... (i am not immune to that)

posted on Apr, 21 2017 @ 12:33 PM
link
wow, I read Graham Hancock's book "Magicians of the Gods". I don't recall him saying that specific block was a record of a meteor strike, but his whole book basically lays out the premise that the Great Pyramid of Egypt marks a point 20 years in the future(from today) that we pass through the Taurid Meteor shower. He also states that this meteor stream is responsible for the the Younger Dryas event which destroyed the last civilization on earth. Supposedly North America took the brunt of the damage and we can see a lot of big land based mammals going extinct, like the saber tooth tiger and the wooly mammoth. They didn't go extinct because of over hunting, it was because their food supply was decimated by a massive meteor strike.

Graham Hancock likens Earth passing through this meteor stream as a human walking blindfolded across the freeway.

I often wonder if the Elite have always known that we are going to pass through this meteor shower in 20 years. After the decimation of our last world wide civilization we had to come up with a plan. That plan was to create a materialistic world view to create technology over the next thousands of years to bring us to the point we are at today so we can defend ourselves from this cycle of destruction Earth has always been on.

Either way, very fascinating, the evidence is starting to stack up.
edit on 21-4-2017 by booyakasha because: (no reason given)

Concerning Hancock, he and his colleague, Randall Carlson, were on the Joe Rogan Experience podcast about a year ago discussing their latest findings concerning the possibility of a celestial impacter causing the dramatic climate change marked by the Younger Dryas period. It's a worthwhile listen if this topic is of interest to anyone (just don't let a certain ATS mod read any of your thoughts regarding Hancock; regardless if new archeological evidence supports his and Carlson's claims/assertions...he's moron in their opinion):

Huh? Small singular event?? It may have been a singular occurrence, but the evidence they present in the JRE webcast (the webcast has projected slides/googled images/graphs/timelines, which illustrates some of the rippling of the land that is an effect caused by large and instantaneous inundation of land masses from rapid ice melting and/or tsunami-type events that flood land masses; the podcast doesn't allow for the interested researcher to see these illustrated effects that are very helpful in putting this puzzle together) suggest all together that was anything but a small event. If the celestial impacter theory is correct (which seems more and more like the truth by the day), this was an event that was absolutely global in its effect and completely devastating to the North American continent. That to me seems like reason enough to record its occurrence...maybe even carve a stone relief for posterity.

If true, this was no small occurrence -- that much can be unquestionably accepted.

originally posted by: RainbowPhoenix
I'm in a particularly enlightened mood this morning *wink wink*. So I'm sitting here and just imagined a scenario where...


Some fun speculation there RP - an even wackier one might be said previous civilisation may still be around on earth somewhere and have 'adapted to our numerical superiority by developing a surprisingly robust technology' - this race of techologically superior indigenous humanoids may also be responsible for some UFO (and USO) reports.

Great thread 727Sky and thanks for posting that Hancock vd.

Ive supported this theory for some time...thanks bookmark

nothing more annoying than a pesky alien
throwing rocks .....? 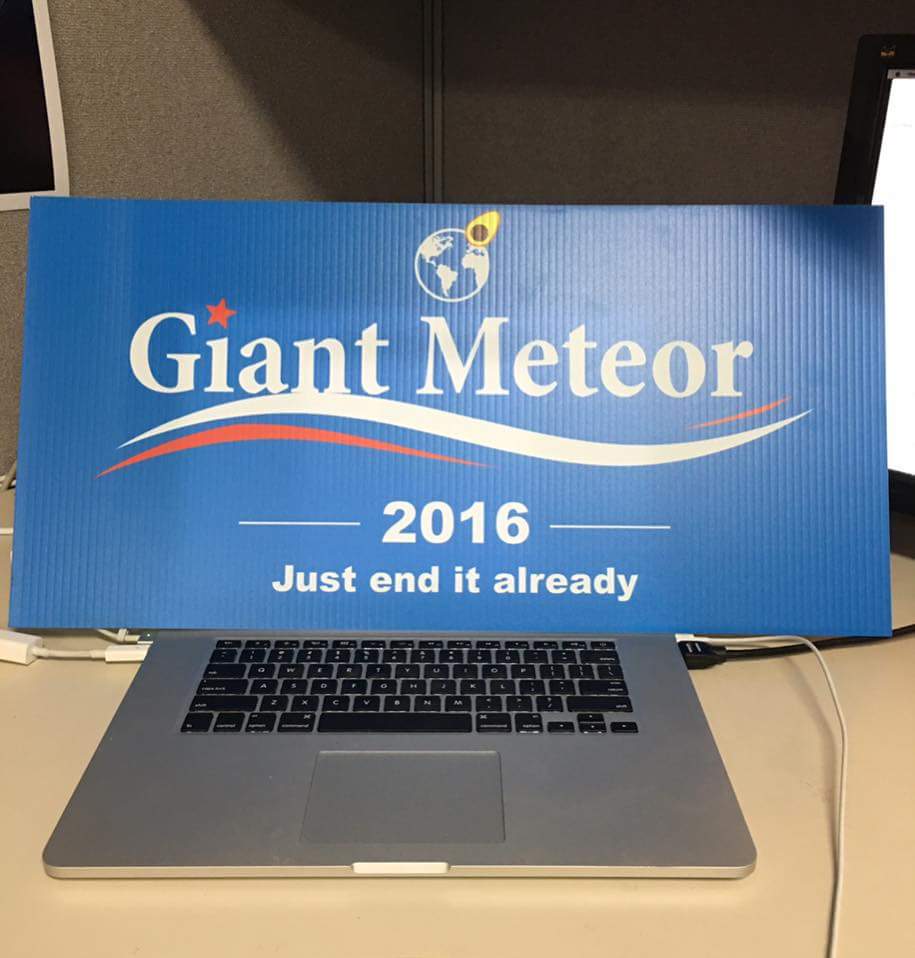 If that was the plan, I hope we can make it in time technologically (this time), without the elites nuking everyone first before the next 20 years are done....

The guy has his fingers on the pulse of how often we are lied to ... over and over again.

originally posted by: FamCore
a reply to: 727Sky

So both the dinosaurs and wooly mammoths died from comet/asteroid impacts. Fascinating find - are we overdue for another one of these events?

posted on Apr, 21 2017 @ 05:44 PM
link
The more we learn the more questions are raised. I am fascinated by topics like these. I was also turned on to Graham Hancock's theories by JRE. Good stuff!!

Oh ...hold on cause he gives a realky good ride!