Study: Nationwide medical marijuana laws would save lives — and a billion taxpayer dollars

posted on Apr, 21 2017 @ 06:49 AM
link
Study: Nationwide medical marijuana laws would save lives — and a billion taxpayer dollars

Why didn't I see this article yesterday? Probably because I was doing other things.

So anyways on to the article. As if you needed anymore reasons to be in favor of medical marijuana, a new study has been released that is showing a significant drop in tax money spent in states that have legalized medical cannabis. Wait. I didn't emphasize that word properly. SIGNIFICANT drop. There we go. It's actually a followup on a previous study they did where they studied just Medicare prescriptions, but this new study expands it to all Medicaid prescriptions. I'll let the article explain:


A fascinating study in Health Affairs last year by a father-daughter pair of public policy researchers found that Medicare prescriptions for things like painkillers, antidepressants and anti-anxiety medications dropped sharply in states that introduced a medical marijuana program.

The implication? Offered the choice between taking medication prescribed by a doctor and self-medicating with pot, many older patients opted for the latter.

But the study left one big question unanswered: Since the study's authors — the University of Georgia's Ashley Bradford and W. David Bradford — only looked at Medicare data, they couldn't say for sure whether the findings held for younger patients too.

Now, we're getting more answers. This week, the Bradfords are back with a new study applying the same analysis to prescriptions under Medicaid, which covers low-income people of all ages. The results largely validate their previous work: Medicaid prescriptions for certain drugs fell significantly in states that adopted a medical marijuana law.


See. I'm not the only one saying it. Here WaPo provided a handy chart to get an idea of the drops. 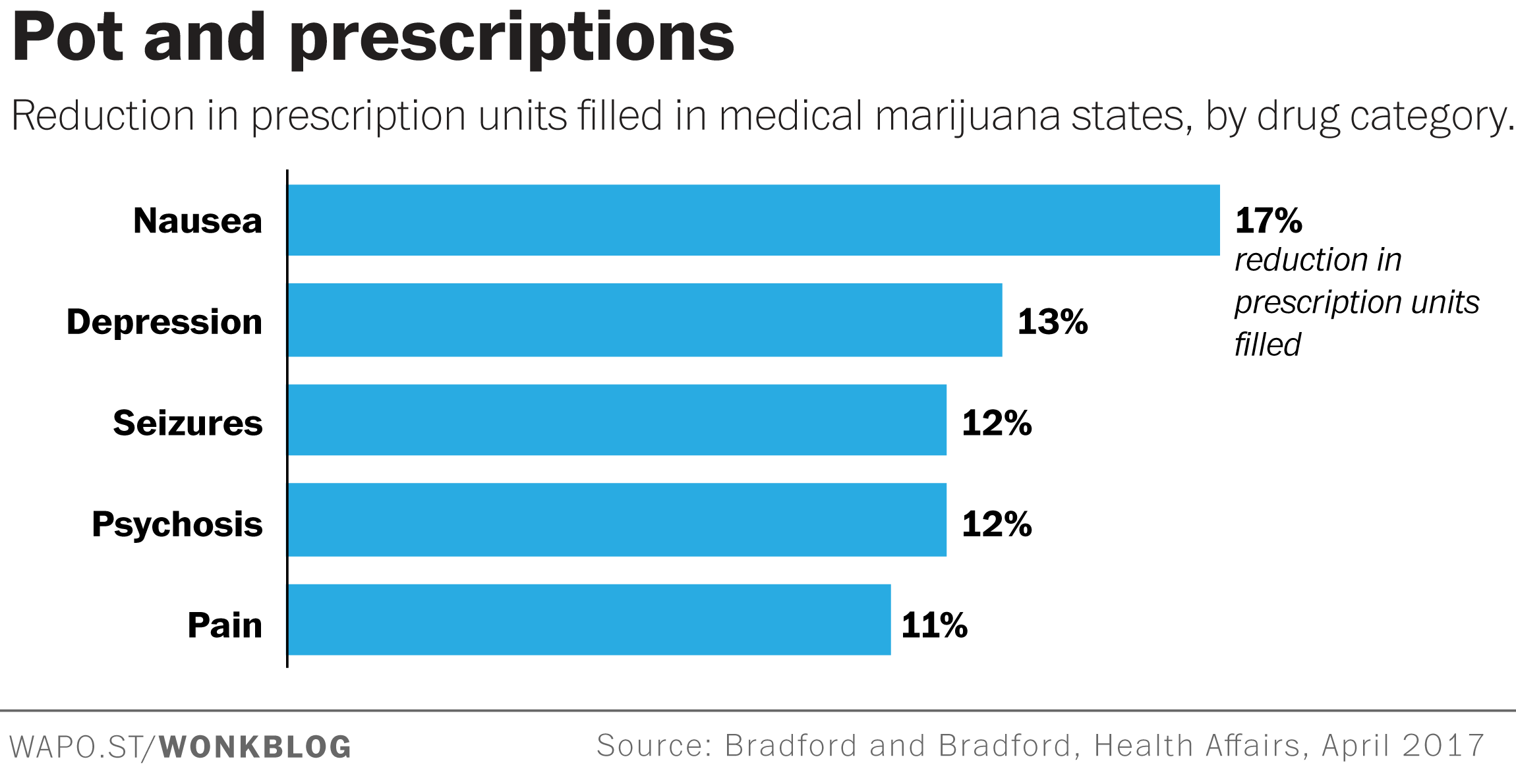 Not everyone who has access to medical marijuana opts for it, obviously. But enough do to make a significant dent in the prescription numbers. “Patients and physicians in the community are reacting to the availability of medical marijuana as if it were medicine,” the Bradfords conclude.

Perhaps most significantly from a public health standpoint, prescriptions for painkillers fell by 11 percent. Opiate painkillers are behind much of the current drug overdose epidemic.


MEANWHILE, our current AG wants to take us back to the 1980's with "Just Say No!" and the Trump administration in general is about to crack down on drug laws across the board. Seriously, of ALL the government precedents, why is THIS precedent the one he doesn't mind keeping intact?

But then again...
Will Jeff Sessions launch a War on Weed? If so, it could accelerate marijuana legalization.

Make pot legal. Cigarettes and alcohol are legal. Pot is not different. It will save huge amount of money with healthcare costs.

The amount of tax money saved and ADDITIONAL tax revenue collected from ending the war on drugs and switching over to a legal and regulated market is just extraordinary. I'm not sure why the government is resisting tapping this keg... It's like a ready made solution for Trump to argue that he is bringing jobs back to Americans. Hell, he could even rub it in the Dems' face that he did what the Dems' base was yelling at them to do for the second half of Obama's Presidency.

Pharmaceutical is not enough. That keeps big pharma in business once they synthesize it into a pill form.

Full blown legalization is, and should be, the ONLY plan of action regarding MJ.

I agree. Of course, but the government's stance on cannabis having no medical value is just a slap in the face of reality. Democrat or Republican, doesn't matter, this idiotic stance is reaffirmed term after term...
edit on 21-4-2017 by Krazysh0t because: (no reason given)

posted on Apr, 21 2017 @ 07:13 AM
link
Our government is run by conservative republicans against the use of marijuana. We just took a massive leap backwards in making it legal. I'm sure as with obamacare, the republicans will find someway to sabotage the states that legalized it.

I was reading that opinion article I posted at the bottom of the OP. It brings up some compelling points how a crackdown could result in a backlash for them and further speed up the legalization of cannabis.

Yep, and lately the conservative talking point for MJ prohibition is the increased ER visits for "children" regarding MJ consumption. People go to the ER for a damn hangnail, that doesn't mean it's a valid ER visit.

Maybe when someone goes to the hospital for a weed OD....oh wait that has never happened, and is literally physiologically impossible.

It's the new reefer madness.


(cuz THAT is legal, and totally healthy)

It's like in October when all the news reports come out of people putting edibles in kids' trick-or-treat pals. Um... no. Edibles aren't exactly cheap enough to be dispersing them for free to the populace. Plus no one does that... By that same token, why is no one afraid of these "nefarious" people handing out airplane shots to trick-or-treaters? "Look mommy! A small bottle of water! It says... Abs... o... lut!"
edit on 21-4-2017 by Krazysh0t because: (no reason given)

Pot is the devil, now shut up and drink yer whiskey!

It might make the recreational smokers shut up about how they smoke pot all the time.. 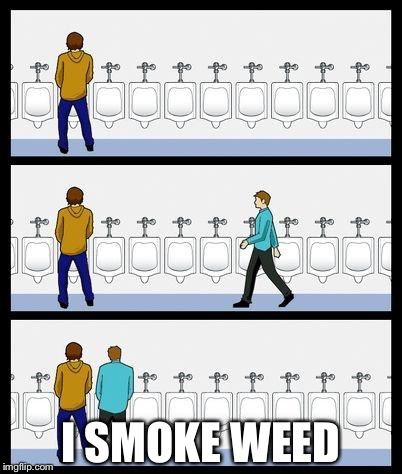 It might make the recreational smokers shut up about how they smoke pot all the time..

Does that really happen in Aussie land?

I was thinking about vacationing there soon, and I don't mind a pothead at all, but creepy potheads are still creepy, even off the pot.

There does seem to be a lot that feel the need to tell you, enough to make me think it's a thing.

You know how there's a thing with vegans sharing their veganism?

I do happen to know the remedy to the intrusive pothead though, throw a twinkie and gtfo asap.

MEANWHILE, our current AG wants to take us back to the 1980's with "Just Say No!" and the Trump administration in general is about to crack down on drug laws across the board. Seriously, of ALL the government precedents, why is THIS precedent the one he doesn't mind keeping intact?

But then again...
Will Jeff Sessions launch a War on Weed? If so, it could accelerate marijuana legalization.


...Sessions has made clear that he still believes that “good people don’t smoke marijuana.”

Does he really believe that it's all about "smoking"? Does he really not know how much more there is to medical marijuana? Or is this just his way of demonizing the plant and demoralizing the patients??? The end result is the same, whether ignorance or arrogance -- or maybe a combination of the two. I guess by definition arrogance precludes educating one's self, thus resulting in ignorance.

I agree that a serious backlash is inevitable if Sessions goes after state marijuana programs. It's a crime against humanity. I almost hope he does try it, just to speed up the inevitable.

As others have said we need full on legalization at the federal level. It's not just the additional tax revenue but all the money that would not be spent on fighting mj.
How many people would not be in jail costing money. How much less time in general in court. Judges gearing mj cases. Gotta pay the baliff. Gotta pay court reporter. How much time not spent by the cops running down mj related #. Have to pay cops for their time. It all adds up.
Cop pulls someone over and finds grass. Now he spends more time. That's time he is not out handling real crimes. Now he has to call the dogs. Now he has to wait till they show.
All that little Bull# equals money spent which would be money saved if legal.

posted on Apr, 21 2017 @ 08:19 AM
link
Screw this medicinal crap. It should be legalized outright. The whole argument against is politically motivated and perpetrated by people with personal agendas. I think I've told this story on ATS before but it fits here...

Back in the 70s, or as Sessions calls it --- the Golden Age of the War on Drugs --- I was doing a medical internship. One of my responsibilities was to draw bloods early in the morning. I entered a darkened pre-op 'ward' with several male patients awaiting day surgeries in order to draw bloods on one of the patients. As I was going about my business, a nurse walked in and approached another of the patients explaining that she needed to administer some medications prior to his surgery. The patients asked what these medications were. The nurse replied, 'Demerol. It will relax you for the surgery.' The patient then responded, 'Oh, okay. Just as long as it isn't marijuana. I don't want any of that stuff.'

I will confess as a boomer, I have been around pot most of my life. I have friends who have smoked it for 45 years and still alive. I never knew anyone whose kids went to ER because of consumption. The dog maybe.

If they want to use that as an argument they should be careful with that can of worms. I'm sure more kids die of guns than pot, but that shouldn't change the second amendment.

posted on Apr, 21 2017 @ 09:02 AM
link
Somehow, someway the Trump conservatives will tie pot to the war on terror, Islam, Mexican gangs, etc. to sway the right wing
into an expanded war on drugs and to keep the for profit prisons filled.