Sighting over the Atlantic, east of Garden City, SC.

posted on Apr, 20 2017 @ 12:05 AM
link
So I usually linger in the Aircraft forums looking for something that probably isn't there. I feel like I would be letting my favorite forum in the world down if I didn't share this report here. I witnessed what I believe was a UFO last evening. Not man made, definitely not green lady. No explanation. Still in awe. So here is the report nothing added nothing subtracted:

I watch the skies a lot. Never see anything other than military fighters(F-16) or transports(C-17, C-130, odd E-4) here with the daily rotor craft(UH-60,UH-1, AH-1, V-22, etc). Tonight while taking the dogs out for the final time at around 253 AM I looked east towards the adjacent skyline to notice an amber or pink/orange light in the sky. The light was a remarkable color and did not look natural. It's closest comparison would be a pink or purple aftermarket automotive halogen headlamp. At first I thought it was an oddly shaped planet or brightly shining star. To my utter surprise and disbelief the light began to shine brighter and to noticeably move. Then another light became evident. The smaller light appeared to the lower right of the larger light. It was moving at a faster rate to close with the larger light. The two then converged and grew brighter in the shape of a blurry cross almost as if they were emitting more energy. They appeared to be about thirty miles east over the Atlantic Ocean. I would guess their altitude to be in the 10-15k ft area. Really interesting.The craft left a light that did not dissipate until well after the source had vanished(30-60 seconds).

Unfortunately the only camera I have is an LG v10. I know from trying to capture aircraft that if they're not within 1000 ft it's practically worthless. Even if I had tried to capture this with my phone there is no way I could have caught it through the ambient light. 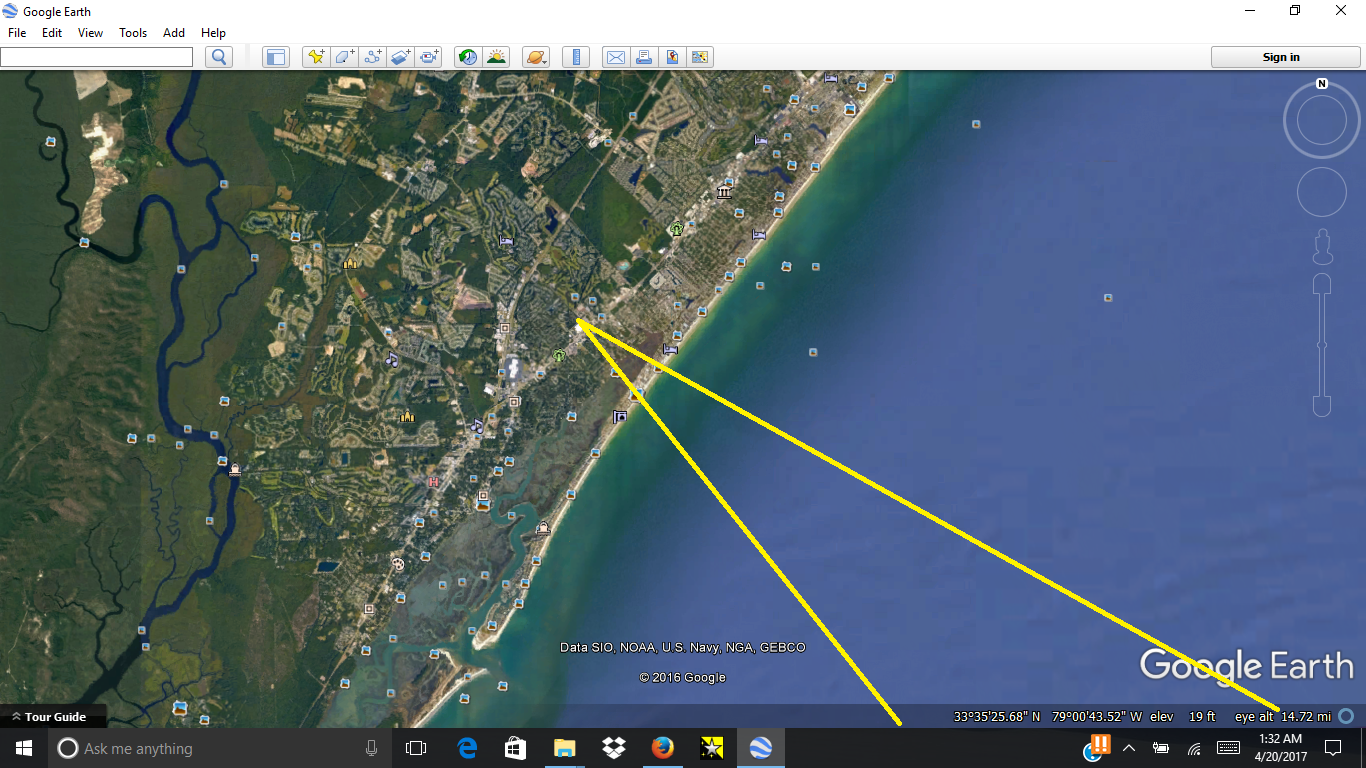 WTF!? I swear I saw a similar light I think yesterday . At first I just figured it was reflection because it was happening in the sunset hours. I was looking West though, and when I noticed there were two other jets in the sky in the distance that did not have this same effect, I felt something was off. I have not seen this effect before so I concluded that it was doubtful to be normal air traffic. It disappeared heading West over the Gulf of Mexico. I am located in the city that hosts USCENTCOM and SOCOM. I was just praying it was not a nuke heading this way, but realized it was moving away.

Also, the jets that I did see in the distance that were barely black shapes in the sky were both leaving contrails. The reddish amber light similar to what you described had no such emissions.

I only noticed one though.

Interesting, but a shame a pic wasn't possible. Can be tough in some light conditions, of course. Have you checked for any local flights in the area? I'd do that first, if for no other reason than to be able to say you could eliminate that as a possibility.

Here is the page on the NUFORC website for SC:

It's not yet updated to the current date, but I would guess any additional sighting reports would show up here.

Maybe MUFON and other sites might have something also?

Here is available commercial flights at 6:30 UTC. That would be the correct time, yes? Converted from local time? 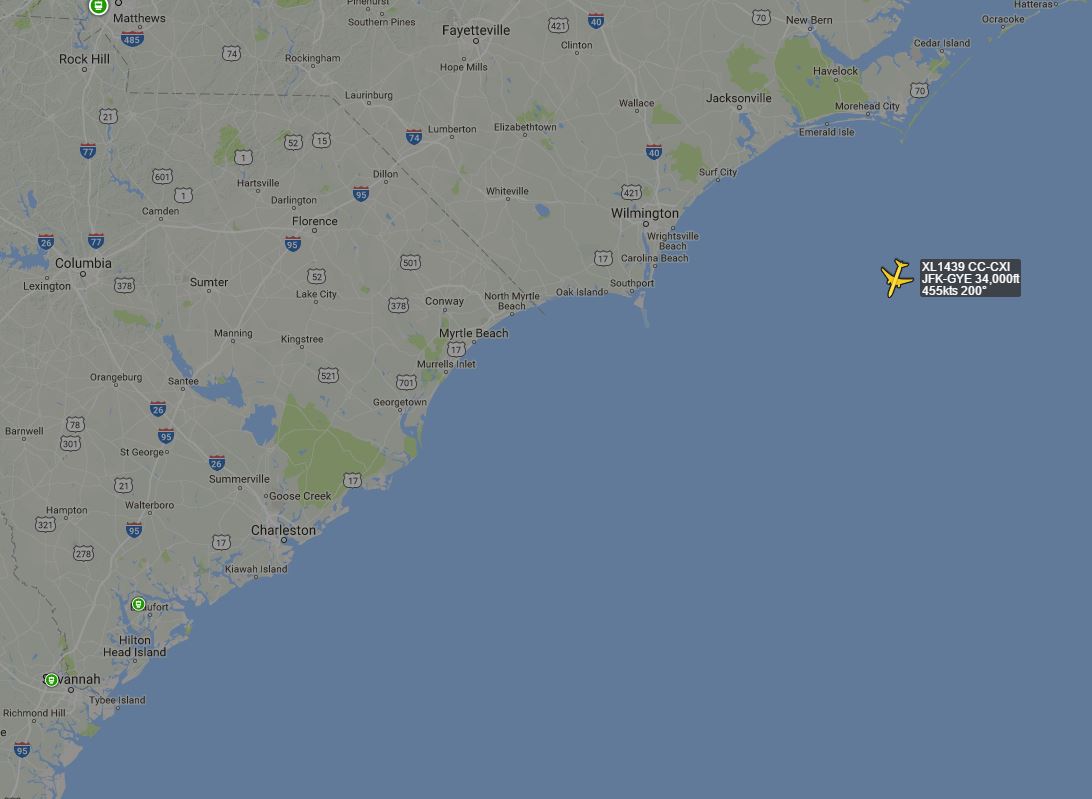 As you can see, there is not much moving in the area at the time you saw the lights, but military flights are another thing altogether. I don't think they are shown on the various flight tracker websises.

You can check for yourself at planefinder.net which is what I used.

I suspect flightaware and other sites might also be of help.

posted on Apr, 20 2017 @ 05:04 AM
link
The weather over the great lakes Monday was really strange and let us see Chicago upside down till way after sunset and it's 55 miles away. Maybe that weather combination was off your coast a few days later.

Trust me this was no "local" flight. I've never seen a jet engine emit this color of light. Was not anything man made. I do follow flightaware and ads-b and this was not a man-made light nor was it a traceable flight. Not only was this out of view for a commercial flight it was too intense to be even the brightest aircraft running full afterburner. It sounds crazy but the color of the light was just wrong for anything man made. Also notable was the color of the sky after the craft was no longer view-able. The night sky was illuminated for a considerable diameter after it's viewing.

I wish there was a way to describe the intensity of the light. It was incredible at it's peak. I would rate it at a halogen level brightness from many miles away. As clearly as a brand new Mercedes from miles away on a straight country road. The dogs didn't react but I swear they did take notice.

That flight is clearly way north of where I am located and the direction of the sky I was looking. I did check the available sources for anything of note and I could find nothing.

I've seen illusions of light over the horizon with the moon in Playa del Carmen, Mexico. This was not that effect. I'm somewhere between a half mile and mile from the ocean and I have no clear view of the ocean's surface. This wasn't a light effect. It was too high in the sky and there were multiple lights moving in conjunction yet independently of one another.

Did the light remain in the atmosphere after the craft disappeared and then slowly dissipate? That's what surprised me was that it was clearly not normal air traffic. The intensity and duration from what I perceive to be a considerable distance(>30 miles) are the antithesis of what to expect from man made flight.

originally posted by: mikell
The weather over the great lakes Monday was really strange and let us see Chicago upside down till way after sunset and it's 55 miles away. Maybe that weather combination was off your coast a few days later.

Thanks for the link to that story. I've seen Chicago "floating" while fishing in Lake Michigan, but nothing that extreme. Wow.

ok well what I saw certainly was not that bright. It was simply a color as you described flying west many miles out in the sky.


Hey. Did the two lights separate after they had "converged"? How did you know "the source had vanished"?

No there wasn't a separation there was a smaller light source appearing to join the larger. After the light sources joined the now sole source grew brighter, from the size of a large star to four to six times the size and in a cross shape. After the light reached it's apex it quickly "shrunk" and disappeared. The only light left after source was a noticeable glow in the same color of the light source but not "illuminated" in the atmosphere that dissipated after 30-45 seconds.

Same color to me is interesting because to me this color was very unique. It was a bright amber at it's most intense and then the clear purple of a HID bulb on it's outside. I just can't think of a similar source of that kind of light in the man made sense.