Freemasonry and The Coming Storm


In my quest to deny ignorance, I discovered what I believe to be something of great value. Many of you are aware of the traditional York and Scottish Rites and the coveted 33rd degree, but did you know there is more to Freemasonry than the untrained eye can see?

Elder members and myself have known what lies beyond the traditional boundaries of Freemasonry, but until just recently, something new has been published that caught my attention.

This my friends, is what ATS is all about.

EGYPTIAN FREEMASONRY OF THE ANCIENT AND PRIMITIVE RITE OF MEMPHIS-MISRAÏM

The creator of the Egyptian Freemasonry of Egyptian Rite was the Count Alexander of Cagliostro (1749-1796), born in Tunisi. He must not be identified with the mystifier Giuseppe Balsamo (1743-1795), the palermitano recruited by the Jesuits to personify and to throw the disrepute on the true Count of Cagliostro.

In effects a secret connection existed between the Illuminati Order of Weishaupt and the Egyptian Freemasonry of Cagliostro that was officially founded in 1785, year of the suppression of the Illuminati Order. Besides, Napoleone Bonaparte was initiated by Cagliostro to the Egyptian Freemasonry and the Masonic Rites of Memphis, of Misraïm and of Memphis-Misraïm come down from it.


The rest of the Order's history is contained in the link above and is definitely worth your time. What you are about to read next is what I discovered today and sounds almost too good to be true.

Let’s dive in, shall we?

The Manifesto Of The Lodge P1 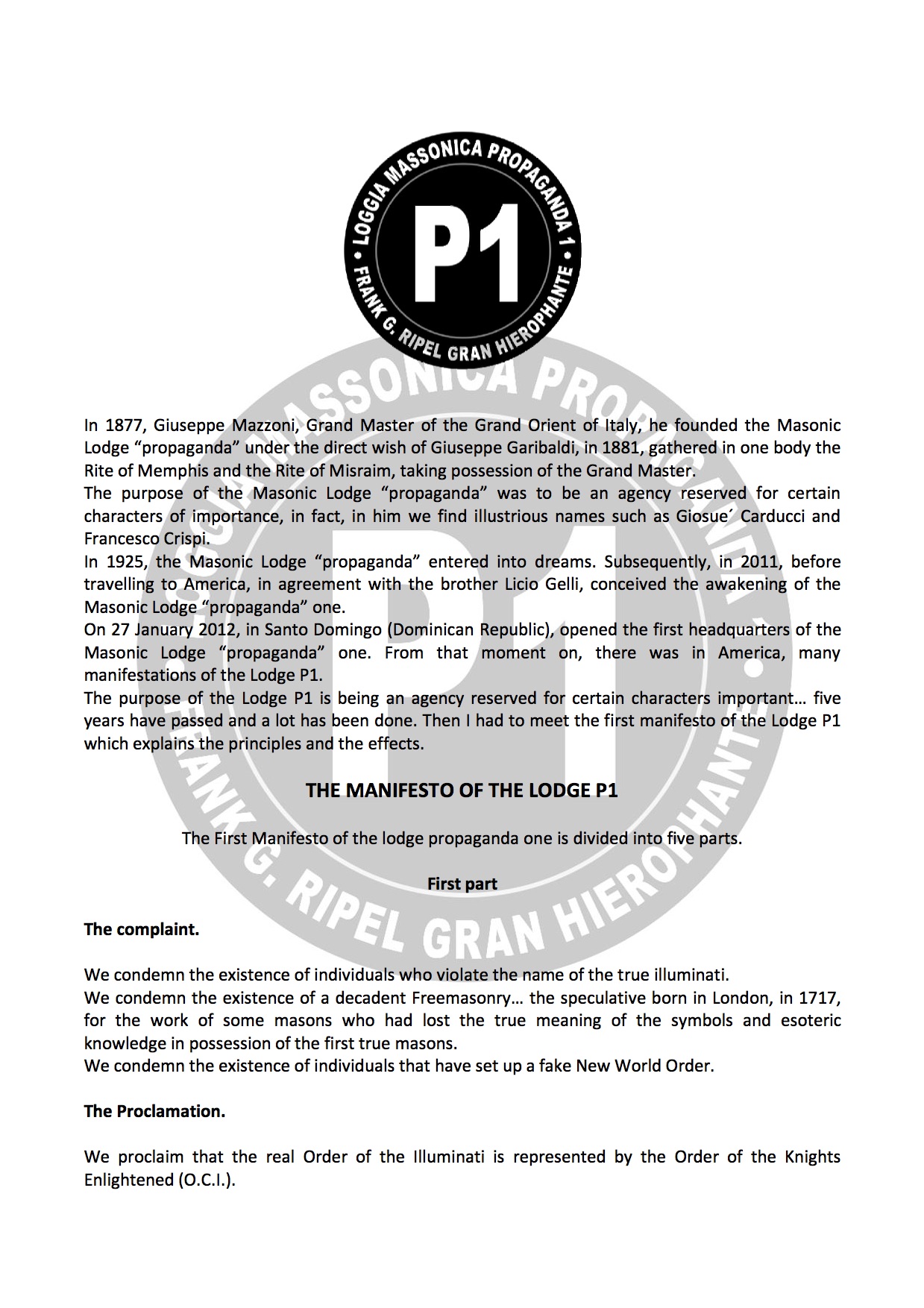 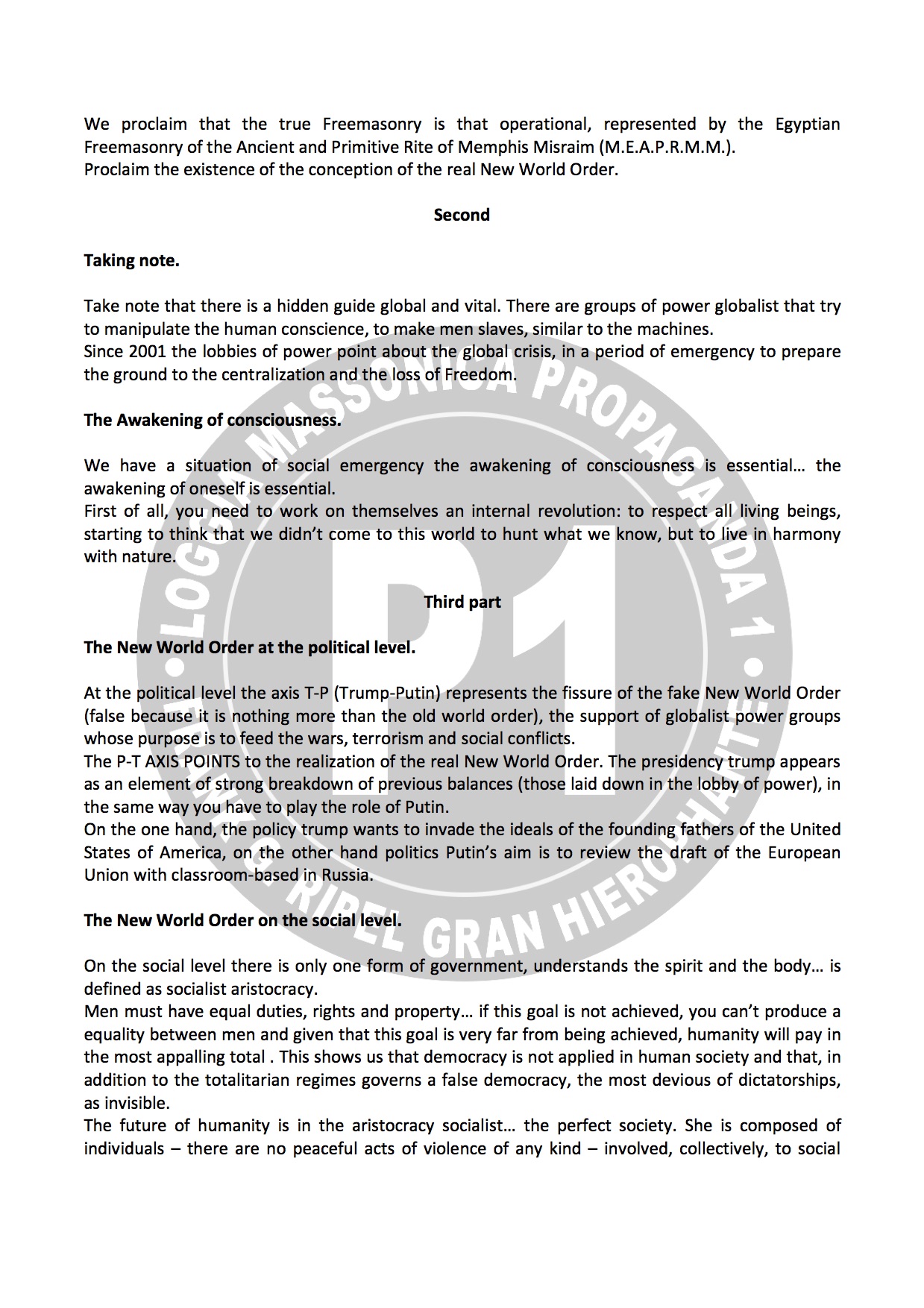 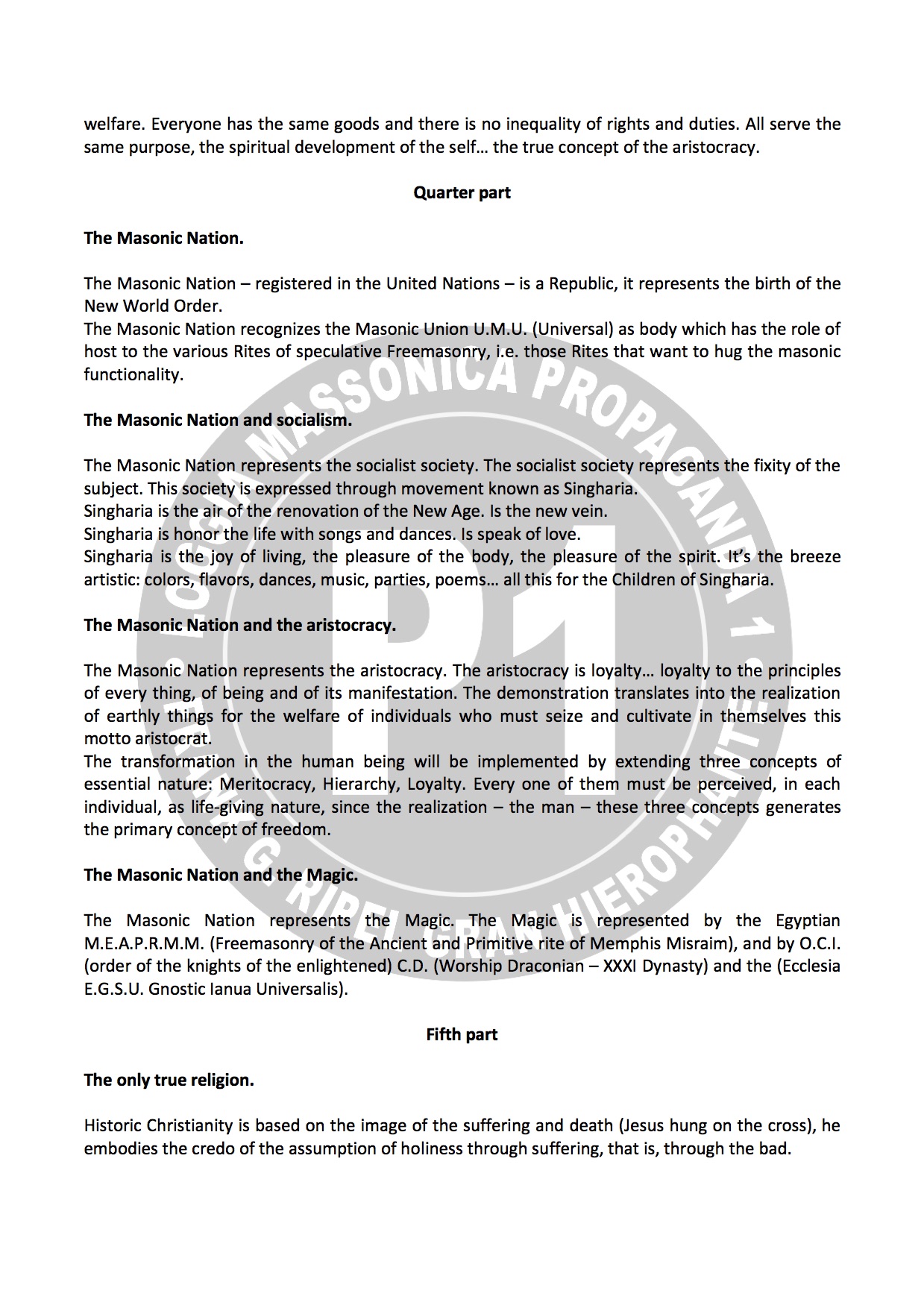 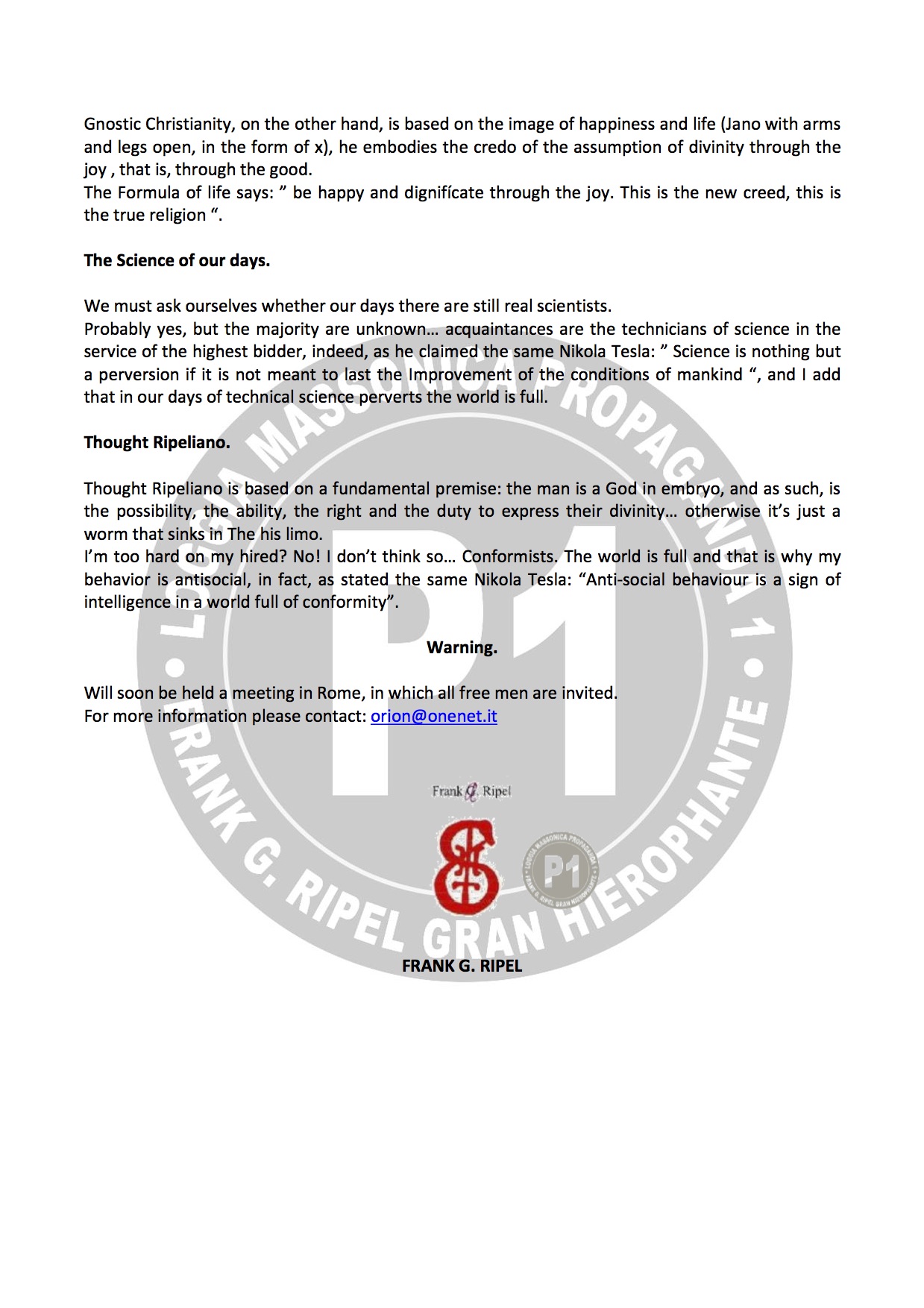 I'm not sure when the manifesto was published, but it reads as though it was created recently. Also contained in the link was this disturbing memo, asking all American Masons to help deal with a perceived threat to the organization.

Appeal to all American Masons

The declarations of REDACTED, a mentally insane person who need to be cured.

The real Mason is known by his tolerance, not by his weakness.

It is useless to say that all what REDACTED told about me is false (I can easily prove it).

Even the photos that he has published (in the attempt to discredit me) has been downloaded from my Blog (you can get it searching Google "Frank G. Ripel" - "Giornale di Viaggio") and was referred to a Hallowin party - 31 October 2011 - where I have been taking part.

Morover , searching Google "REDACTED" and "REDACTED 1613 Nation" you can find a wide report about him, a scammer, liar and information forger.

In any case, it is to point out that REDACTED is a mentally sick person, therefore I appeal to all the American Masons.

Appeal to all the American Masons. Take care of this mentally disturbed person, till it's too late.

NB. This writing of mine is for cautelative and preventive purposes. I will not be surprise if REDACTED, under a madness influence, could do something crazy, as a massacre in an American downtown.


This next document was published on April 13, 2017. It’s reads like a declaration of spiritual war and specifically notes the death of David Rockefeller. I highlighted some parts that I thought were interesting and if true, absolutely disturbing. 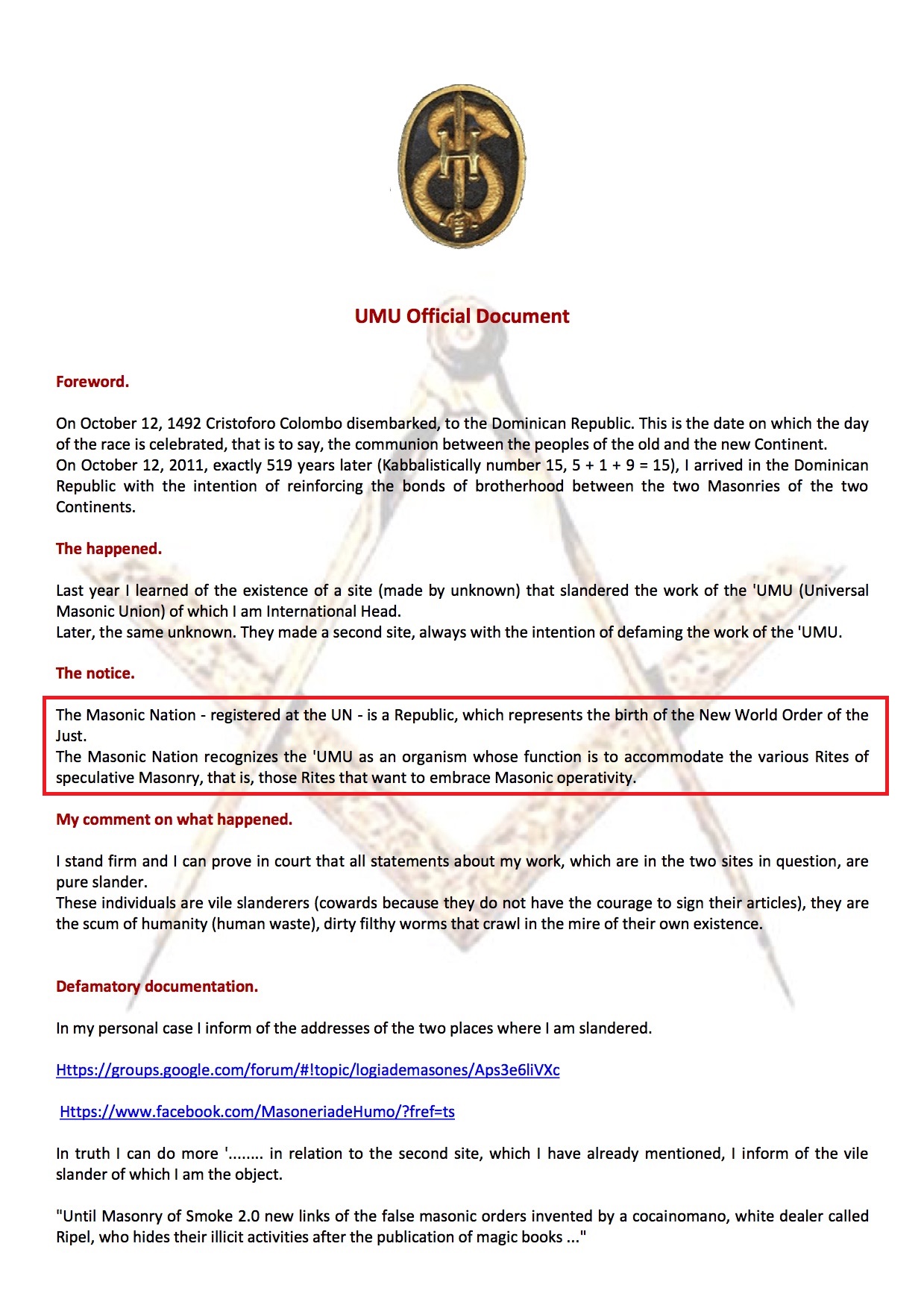 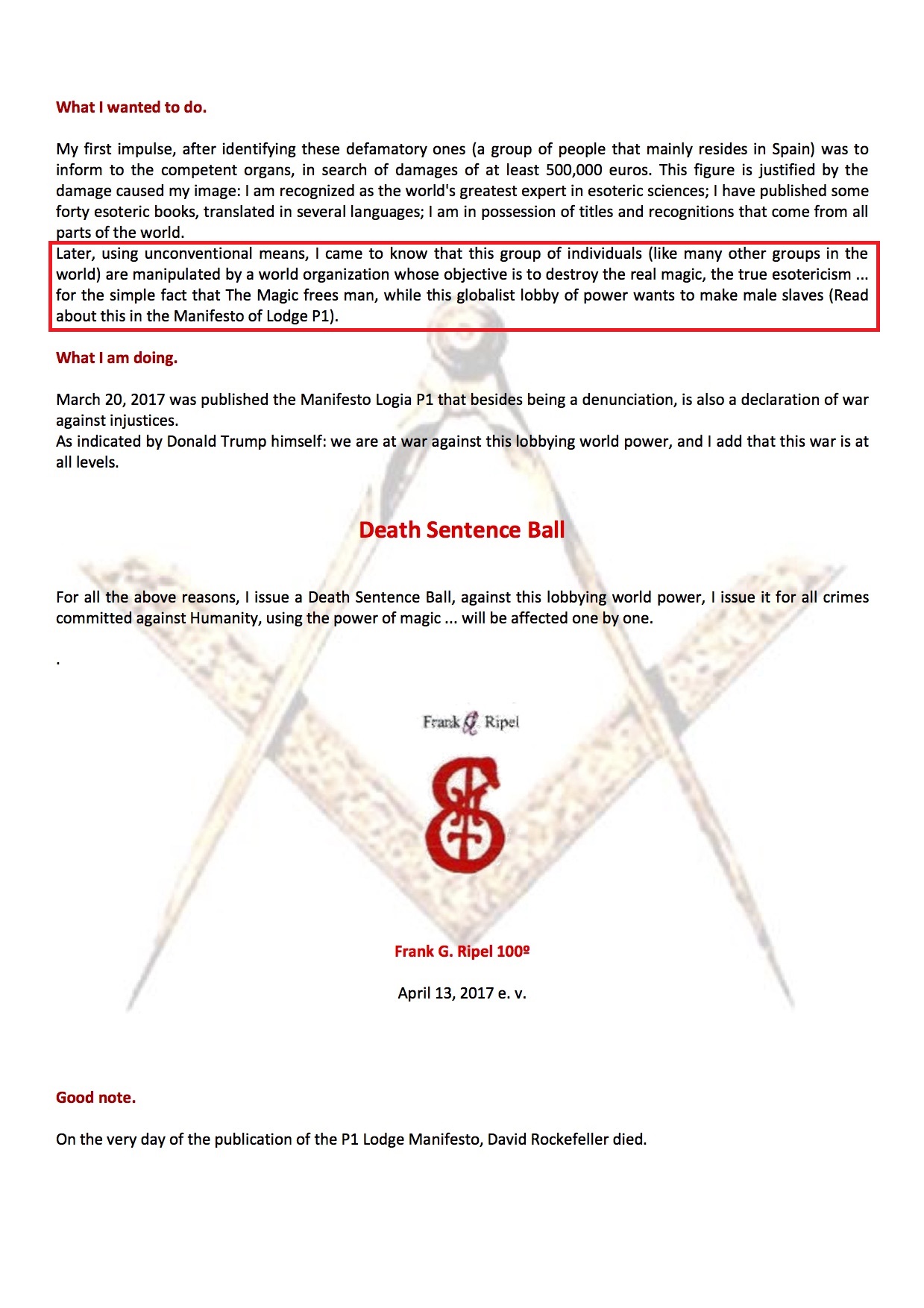 I’ll leave the rest for ATS to discover on their own. I’m willing to speculate about the implications that have been put forth and look forward to what other members have to say. This is highly extraordinary material and should be dissected carefully.

Note: All 13 Rites of the 1st Degree can be found on YouTube

Frank G. Ripel is the founder of the Orion Association, which setup ten initiatic organizations (now in sleeping): the Order of the Diamond Star, the Order of the Golden Star, the Ordo Rosæ Misticæ, the Oriental Egyptian Order of the Ancient and Original Rite of Memphis and Misraïm, the Ecclesia Gnostica Spiritualis Universalis, the Orion University, the Alternative Integralist Movement, the World-Wide Confederation of the Ufologic Centers, the Draconian Cult, and the Operative Freemasonry.

posted on Apr, 16 2017 @ 08:38 PM
link
WOW! Is this for real? But I've been told by "high level masons" on this very site, there is nothing esoteric or magical about their order. They practice handshakes lolol.

Masons would be very astute allies against globalist psychopaths.

originally posted by: SuicideKing33
WO
But I've been told by "high level masons" on this very site, there is nothing esoteric or magical about their order.

Who said there is nothing esoteric about Masonry?

This should be good readin...

They also claim not to be a religion, despite the fact that their 'Jabulon' initiation ritual is their version of a 'baptism' (a symbolic death, burial and resurrection).

Anything that lies about not being a religion, is an religion into all manner of occultism across all the mythological ages (where convincing people their 'original god' is the same as every other 'god' from forever, to LIE like that to people, on spiritual matters that is, is about as diabolical as anything that could be imagined when considering the goal is the stealing of souls.

Spoken by a staunch agnostic. Take care.
edit on 16-4-2017 by IgnoranceIsntBlisss because: (no reason given)

posted on Apr, 16 2017 @ 08:58 PM
link
a reply to: eisegesis
For those who don’t realize, the Ancient & Primitive Rites of Memphis & Mizraim generally considered clandestine by most Grand Lodges, specifically the UGLE and American Grand Lodges. These rites are worked in a few countries like Bulgaria, Italy, Romania, and the Dominican Republic, however, from Schnoebelen’s testimony he did not travel to any other jurisdiction. From a link, he provided, it was the International Order of the Ancient Primitive Rites of Memphis & Mizraim and that is not a recognized appendant body in American Freemasonry. The Rites of Memphis & Mizraim are no longer worked by legitimate American Freemasons, but are now under the jurisdiction of the Grand College of Rites.

originally posted by: IgnoranceIsntBlisss
They also claim not to be a religion, despite the fact that their 'Jabulon' initiation ritual is their version of a 'baptism' (a symbolic death, burial and resurrection).

If it were a religion I would not be in it since I despise organized religion.

And what is the goofy 'Jabulon initiation' you are talking about? There is nothing about Jabulon in a Masonic initiation. Hell, you can easily look up the Password of Entered Apprentice if you wanted to and it is sure as crap not 'Jabulon'.

And no there's nothing magical with us....we just read and talk about how we're going to take over the world..
Oops nevermind, that's what we do on book club night.

posted on Apr, 16 2017 @ 09:02 PM
link
a reply to: IgnoranceIsntBlisss
Freemasonry isn't a religion nor is our rituals a version of "baptism."

posted on Apr, 16 2017 @ 09:03 PM
link
a reply to: AugustusMasonicus
He really needs to put down the Stephen Knight book which claims that Royal Arch degree claims that is our secret god of Freemasonry.

The not-so-secret God of Masonry is Lucifer! Hail Satan!

Or is it Baphomet? I keep forgetting.

Whether or not your crew says Jahbuln, whatever.

The first degree initiation doesn't go like this:
www.bilderberg.org...
If that isn't the precise script where you go, then what is?

Who could read that page there and possibly not immediately assess that to be a religion initiation rite?

originally posted by: KSigMason
a reply to: IgnoranceIsntBlisss
Freemasonry isn't a religion nor is our rituals a version of "baptism."


Okay, fine, Freemasonry is a spiritualist cult. Is that better?

Just be honest about it is my whole hangup. For me, its like trolling of the highest order this whole facade.

They may want to make themselves seem more in tune with a changing populous, or in many cases, try to put themselves in a better light when they have been found to be despicably raping little children or doing other such things like burning people at the stake.

It is safer to just assume that you are being led around by a nose ring.

Now, why Freemasons need to project a better image of themselves is anyone's guess but they do seem to be making a lot of noise of late.

Perhaps they have secret writings of the end times and are getting nervous.

originally posted by: IgnoranceIsntBlisss
The first degree initiation doesn't go like this:
www.bilderberg.org...
If that isn't the precise script where you go, then what is?

Dude, take a look at that ritual. See the part where it says 'United Grand Lodge of England'? See where my location says 'West Orange, New Jersey'? Now ask me if we use that ritual.

Now that we got that cleared up, did you see anything about Jabulon in there?

No, that would be the Master Mason degree where the death of Hiram Abiff is stylized.

Okay, so then could you clear up the matter with the script one would follow in Jersey?

Alright, so the Masonic Baptism isn't until the Master Mason's degree initiation rite.

Does the "Worshipful Master" lead that ceremony?

Note that I'm not even knocking whatever 'god' it is that masonry "isnt" about, just this coy game they play in total DECEPTION about what it is. I suppose that is the nature of the beast, the nature of esotericism afterall. But I'm a stickler for deception and this stuff annoys the hell out of me.