page: 1
25
log in
join
share:
WeLovePutin
+8 more
posted on Apr, 16 2017 @ 04:50 PM
link
On the 4th of October 1992 a Boeing 747 freighter of the Israeli airline El-Al, crashed into a couple of flats located in the Bijlmer, Amsterdam, the Netherlands. Among the deceased were the 3 crewmembers, the only passenger and 39 residents.

What at first looked like an ordinary terrible accident became much more mysterious when Dutch newspaper 'Trouw' reported 20 men in white protection suits were spotted at the crash site the following morning. Some witnesses have stated these men spoke a foreign language, conducted a series of tests and took several fragments (ranging from tiny parts to big pieces covered with a sheet) with them before leaving and never being heard of again.

Shortly after the disaster the GG&GD in cooperation with the RIAGG started giving aftercare to the affected residents and caregivers to prevent psychological issues.However, after about a year, more and more people started reporting physical issues. Among those most reported were, sleeplessness, cronic respiratory tract infections, pains, impotence and gastrointestinal complaints.

Supposedly there was no direct relation to health issues and the plane's cargo, according to minister Jorritsma of 'Verkeer & Waterstaat'. Minister Borst of 'Volksgezondheid' stated there were ''no extremely toxic, highly dangerous or radioactive substances'' on board of the plane.

The official cargo of the plane mostly consisted of fruits, perfume and parts. However, in September 1993, reports appeared in the media that the plane was carrying dangerous substances. A portion of the parts were military in nature and apparently a third of the cargo wasn't checked at all.

An overview of the cargo was send to parliament by minister Jorritsma, but this list appeared to be different from the one a lawyer received from El-Al. There were also unreadable freight lists, double freight lists and double freight bookkeeping. In September 1996, El-Al got sued for forgery by mr. Plettenberg who was Operations Officer at El-Al during the Bijlmer disaster. Aviation police concluded in 1997 that El-Al didn't do anything illegal though.

In the meantime, the Rijksrecherche did an investigation into the men in white suits. Stories of secret extra flights to Israel emerged in the media aswell. Speculations that the El-Al Boeing carried a secret military load that got secured by Mossad agents after the crash kept increasing.

The Rijksrecherche concluded that the men in white protection suits were Healthcareworkers from the GG&GD, but that Israelis were also present at the site after the crash. They got the instruction to continue the investigation, but even after several follow ups there was still no clear picture. The commision of the parliamentary survey eventually concluded that most of the eye witness statements could be traced back to healthcare workers in light clothing. It couldn't explain all observations though. It also concluded it was likely evidence dissapeared.

In May 1998, the first medical investigation into the results of the crash was conducted by the AMC hospital. It published the results in January of 1999, in which it found 16 cases of auto-immune diseases which could possibly be linked to the disaster. Beside the AMC investigation, the Rijksinstituut voor Volksgezondheid en Milieu (RIVM) also conducted one. It concluded that even though dangerous substances got released during the fire, the health risks were actually small. It estimated the risks at 1 or 2 extra cases of cancer per 10.000 exposed people. The chance of poisoning by uranium was considered minimal.

Then in 1998 the commission-Hoekstra was created to get a clearer picture of the inconsistency in the several investigations. It concluded that it couldn't be confirmed what 20 tons of freight consisted of. Interestingly, the NRC Handelsblad reported that the plane was carrying 190liters of DMMP. This cargo was destined for Israel's main state-owned research for the working of poison gases. DMMP is the most important element for the nerve gas Sarin.

On the freight lists the Dutch authorities received this part of the freight was labeled as ''flamable liquid''. According to combat gas experts, 190 liters for a research institute was an unusually large order.

The mystery about the cargo had led to diplomatic tensions between the Netherlands and Israel. On ministerial level was spoken and information was transferred. The last questions about the cargo were answered by Israel and El-Al to the parliamentary committee. The committee concluded that the unknown load of 20 tons consisted mainly of computer components and not of hazardous substances.

posted on Apr, 16 2017 @ 04:50 PM
link
Note: This is my first thread, please be gentle. It's very simple, yes. Just wanted to bring attention to this conspiracy, in case anybody hasn't heard of it yet. Also, possibly placed in wrong sub-forum. My apologies if it is.

Thank you. Will get right on it.

originally posted by: WeLovePutin
On the 4th of October 1992 a Boeing 747 freighter of the Israeli airline El-Al, crashed into a couple of flats located in the Bijlmer, Amsterdam, the Netherlands. Among the deceased were the 3 crewmembers, the only passenger and 39 residents.

What at first looked like an ordinary terrible accident became much more mysterious when Dutch newspaper 'Trouw' reported 20 men in white protection suits were spotted at the crash site the following morning. Some witnesses have stated these men spoke a foreign language, conducted a series of tests and took several fragments (ranging from tiny parts to big pieces covered with a sheet) with them before leaving and never being heard of again.


A video that solves the crash mystery,


Two links, one is a sceptic view,
www.timesofisrael.com...

The other, a view from the other, but extreme perspective,
careandwashingofthebrain.blogspot.co.uk...
A BBC report that says Israel admits to chemicals being aboard the plane, 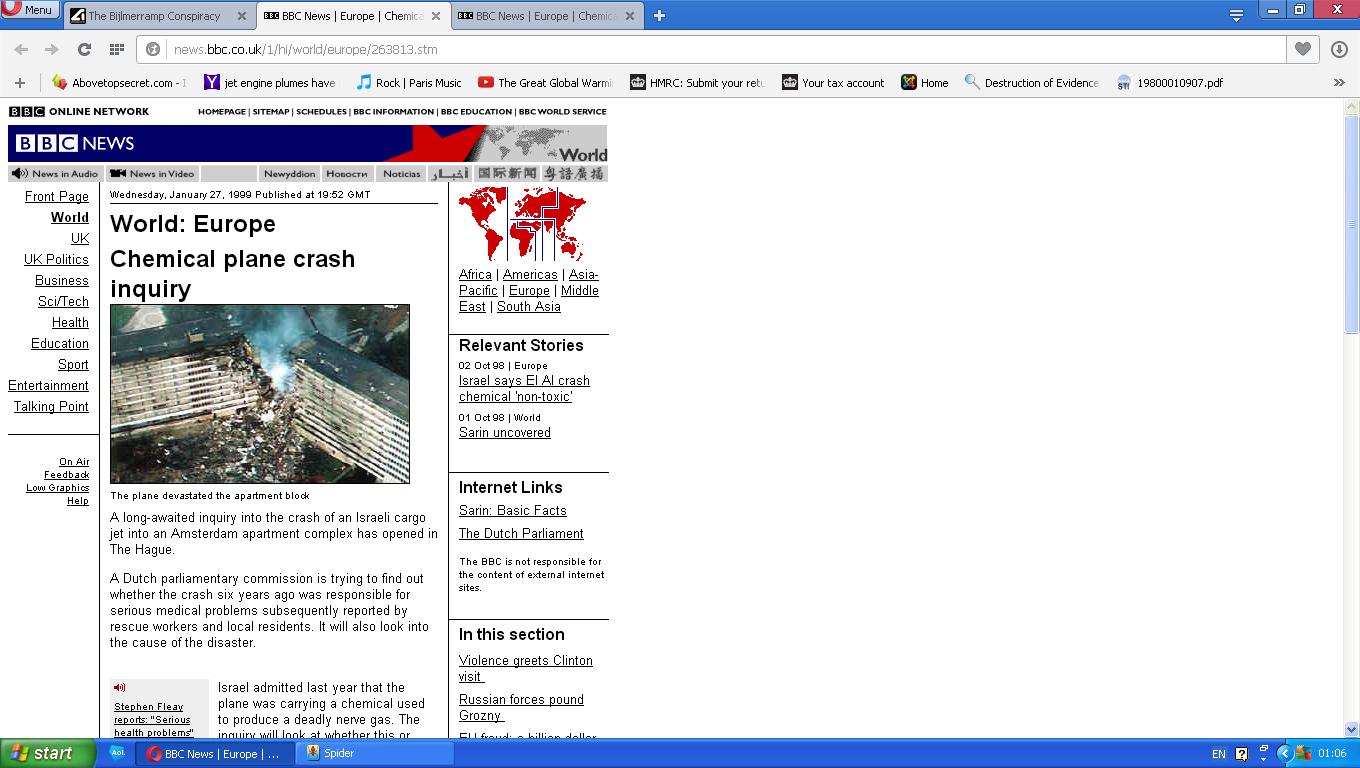 more clarity in the link below,
files.abovetopsecret.com...

I had heard about this before, but it really needs some tweaking all round.
edit on 16-4-2017 by smurfy because: Text.

posted on Apr, 16 2017 @ 09:41 PM
link
I've always been more interested in how the plane crashed. According to the official version of events, the number 3 engine detached itself, floated along the wing's leading edge, ripping off the slats, and then impacted the number 4 outboard engine, ripping it off as well.

Now normally, if an engine starts to vibrate uncontrollably, the four hold-down pins are designed to fail in a front-to-back pattern, so that the detached engine is pointed downward and falls away from the plane, to prevent any of the kind of damage the El Al plane suffered. Even if the pins don't fail in this way, such as happened to an American Airlines DC-10 that had just taken off from Chicago O'Hare airport back in '79, the engine still passed over the wing without causing any more impact damage to the plane. What a six-ton engine and cowling won't do is float like a feather along the wing.

My gut feeling is that the El AL plane was sabotaged in some way, perhaps as revenge on Israel by some Deep State players for some perceived sin. A possible precedent for this was the mysterious sinking of the Israeli submarine "Dakar" back in '68 in the Med. Some say the US Navy deliberately sank her as revenge for the attack on the USS Liberty back in '67. 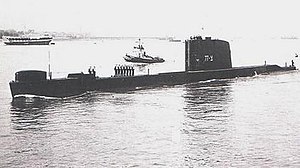 Then again, 1968 was a bad year for submarines:

en.wikipedia.org...
The exact cause of Dakar's sinking is not known. It was one of four mysterious submarine disappearances in 1968; the others were those of the French submarine Minerve, the Soviet submarine K-129 and the US submarine USS Scorpion.

Perhaps there was really some kind of hot war underwater between NATO and the Soviet Union, of which we are still unaware.

posted on Apr, 16 2017 @ 10:40 PM
link
The tail stabilizer of the older model 747 had a massive chunk of Depleted Uranium in it as a counter weight, that was the reason for the careful clean up team.


Aircraft that contain depleted uranium trim weights for stabilizing wings and control surfaces (such as the Boeing 747–100) may contain between 400 and 1,500 kg of DU. This application is controversial because the DU might enter the environment if the aircraft crashes. The metal can also oxidize to a fine powder in a fire. Its use has been phased out in many newer aircraft. Boeing and McDonnell-Douglas discontinued using DU counterweights in the 1980s. Depleted uranium was released during the crash of El Al Flight 1862 on 4 October 1992, in which 152 kg was lost, but a case study concluded that there was no evidence to link depleted uranium from the plane to any health problems. Counterweights manufactured with cadmium plating are considered non-hazardous while the plating is intact.

I'm only talking about the clean up part, however just like Desert Storm and Soldiers getting very sick, I believe a cover up from the DU was in action, the plane carrying chemical weapons I do not think so - a cover up from the DU and Cadmium? Yes.
edit on 16-4-2017 by MuonToGluon because: (no reason given)

posted on Apr, 17 2017 @ 08:47 AM
link
Thanks for the contributions. I didn't have time to go over it or add links yet, but in the coming days I will update the OP with more information.

posted on Apr, 18 2017 @ 08:07 AM
link
How do I edit the OP? I don't see an Edit button on it anywhere. I want to put out the first update, which focusses on testimonies from people at the crash site. I'm completely redoing thread layout aswell, since a lot more information will be added.

Have you ever heared if some terrorist organisation claimed the "accident"? Because that is what such organisations do to attract attention for their cause. If no such group stepped forward for being responsible for this crash you can assume it was not sabotage.

No. There was one person mentioning he thought he saw a rocket launch due to the flash or whatever it was. There has never been any proof this was a terrorist attack though. I also can't find his statement at the moment. I know it exists in the official report from Parliament, which I have had open for several days now already and have seen his statement twice in it. But, well, that thing is huge and can't find it again right now.


Also, will someone please tell me how to edit OP. Else I start a new one in a couple of days, cause I already have 3 pages of more information and there's much more still to add.