This is a famous case which I for one believe to have been a genuine occurance, I am surprised however that anything different about the soil composition has survived this long due to the damp climate, water, forested location and ground insect's as well as other erosive factor's but nevertheless these finding's are intriguing and would suggest as posited a magnetic property.

The fact that they put him back alive is also intriguing considering the terrifying nature of his experience and leave's me wandering if they have a benign or malign intent and if they are the same species as many other encounters.

The Dramatization of the story Fire In The Sky deviated quite a bit from the actual account perhaps in order to make the abduction more entertaining and perhaps too many artistic liberty's were taken.

Here is an interesting youtube which used clip's from the movie and has his giving a speech.

Here is one about other sighting's and Travis Walton's as well.

posted on Apr, 16 2017 @ 10:39 PM
link
If electromagnetic, using the earth's fields for energy beyond our understanding for gravity control, anything ferrous should force itself through the softer soil to the pull of the field...and this could be off the charts looking at the actual energy required to accomplish such an amazing feat....makes some sense....

originally posted by: WUNK22
That reply is why I love ATS! In a million years id have never had know that, thank youVector99!! a reply to: Vector99


Double that comment, I agree, Vector has hit a sweet spot of an idea that may very well be more likely.

posted on Apr, 17 2017 @ 12:28 AM
link
Anyone who's good at recognizing human behaviors and then watching Mr. Walton relate this story the way he does, and having passed 5 lie detector tests as of 2011 will know he is telling the truth, and that this incident really happened exactly the way he says it happened.
It is what it is.

posted on Apr, 17 2017 @ 12:34 AM
link
I believe in UFOs, having seen them, and known many people who saw them. I even had an ancestor on project blue book. Family lore says that the government has alien bodies.

That said, I do have issues with the Travis Walton case, mainly that his actual account (not the movie version) sounds more like one of those contactee encounters and I almost never believe those.

The movie version scared the shtt out of me as a kid. I blame it for my bizarre UFO phobia (although who knows where phobias come from, really). Regardless, it's a very important historical case and any investigation is a step in the right direction!!! Thanks for sharing!

I was initially very surprised that any potential trace residue could be considered to have been left behind 40 years after the event, in such a forested and damp location - but I guess as archaeologists are still able to identify where fires and floods have occurred in ancient times, there may be merit in the endeavour...

I wonder if there any earth-bound technologies that would leave similar readings, or readings of any kind in the soil after such a time? And also whether there are any other examples of a higher concentration of iron particles in surface soil occurring naturally, perhaps in specific locations or following ground tremors, etc.

Might have to follow the links when I have more time. I'm curious to know where the control samples were taken from too. Great food for thought

posted on Apr, 17 2017 @ 05:21 AM
link
I've not read the actual account and just have seen the film in the past, being its an entertainment based media of course just like JFK the writers and director will have adjusted the story but I do believe that the guys all had polygraph tests and passed.

It begs the question, why would Travis commit to a poly if he was telling full on lies, sure, polys are not as rock solid as many think but with the material Travis was saying it would have been bloody hard to convince yourself it was true enough to pass a poly.

Then again I also have an issue with a huge amount of the abduction stories, so many are almost carbon copies of others and so many linger a tad too long on the sexual element making me think there's a little more to this 'story' and more in a mental health issue. Don't get me wrong though, I do believe in UFO's, I've seen them as has my wife but I just don't know what they are, fantastic for sure but who is actually flying them, no idea..

The Travis Walton case very much interests me, I'll have to read the account, what makes me like it is that there's nothing really in it for those guys, 90% of people immediately thought its just some backwoods uneducated people making crap up. Even when the media showed interest they also painted them as idiots making stuff up and that is why its so interesting, anyone attempting a sham would have realised this is how people would have reacted.

That is why I say there's nothing in it for them, sure Travis made money from his book and from the film but there was no guarantee that any of those things would happen considering all the abduction stories around. I'd love to know what really happened to Travis, I'm sure a real thing did happen and if its as he has said then its a hellish event for sure.

originally posted by: zazzafrazz
Does nothing to change my mind the story was a hoax by Walters and possibly his family.

You are not alone. There are some serious accusations made that this was all a hoax. 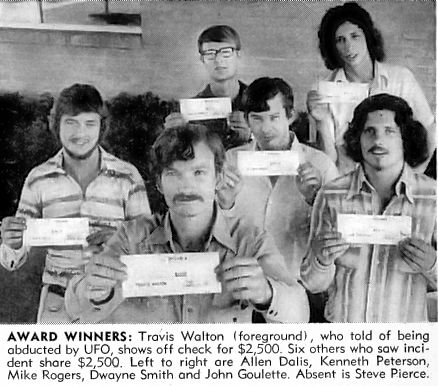 In which case what does the analysis of the soil samples really point to?

Yet the story has prevailed for more than 40 years now despite many trying to de-bunk the story. So it is up to everyone to make their own minds up on what really happened.
edit on 17/4/17 by mirageman because: edit

posted on Apr, 17 2017 @ 07:59 AM
link
i was lucky enough to ask mr.walton a question when he was on the art bell show years ago and maybe this correlates. he believed when he was "zapped" it wasnt a weapon of any sort or something they directed at him, but instead a discharge from a field around the craft. he had hunkered down at one point then stood up at which point he got zapped. so maybe these higher amounts of iron could be something from the discharge. if it was a high voltage arc and the craft is made of an iron alloy could it have blown this off in microscopic amounts in that instance depositing it on the ground? on a side note when asked what he believed the aliens intentions were, he said that he actually believed they were trying to save his life.
edit on 17-4-2017 by TheScale because: (no reason given)

I'm not convinced by his response when it turns out the lie detector doesn't believe him.

In Phyllis Budinger's analysis of the metal (windmill part), a fragment from the alleged 1945 UFO crash, she determined that it was ordinary metal, but that:" The aliens may be time travelers. So if they are from Earth's future, their craft are 'Earth-made' and there would be no isotopic differences."
Frontier Analysis: Analysis of Two Metallic Parts Purportedly from a Crashed Unidentified Aerial Object (San Antonio, New Mexico August 16, 1945)
edit on 17-4-2017 by CardDown because: (no reason given)

I have simply rationalized for myself. I am a man of finite years. I would not spend them traveling across light years of space ... And, even if mine were without limit I'd probably consider any such trip mostly wasted time. What does Earth have to offer any scientifically advanced culture? A chance to have a conversation? Like we're having right here at home??

An interesting find but it doesn't solve anything IMO.

Electromagnetism is one of the governing forces of the universe (the others being gravity and strong and weak nuclear forces) so nature could've played its part.

However we now know electromagnetic propulsion is possible, but do EM drives leave behind traces of 'pollution?' that is yet to be seen as we have not built a EM drive yet.

The Condon report suggests that more than ninety percent of sightings are hoaxes, natural phenomenon or misidentification, so all we have for now is anecdotal evidence and and an usually high presence of EM.

Keep an open mind snarl, I KNOW that they are here. If you trust me even 1%, thats enough. I tell you the truth, have had close encounter of the 4th.

posted on Apr, 17 2017 @ 12:12 PM
link
Why do people say of abduction cases "Oh, they sound the same as other abduction cases so they must be jumping on the bandwagon"?
This is false thinking. Just why should the abduction stories differ? Think on the aliens point of view, if they are abducting people they are doing it successfully so why change their Modus Opperandi?
Now tell me why should the aliens change their MO just so all the abductees have a different scenario to tell?
So I say again, if it's a successful abduction operation all abductees WILL come up with the same story.