page: 1
24
<<   2  3 >>
log in
join
share:
theantediluvian
+4 more
posted on Apr, 12 2017 @ 08:01 PM
link
Back in early February, in the thread, Mapping the Swamp, I shared a diagram of various connections between Robert Mercer, Cambridge Analytica, Steve Bannon, President Trump and others. I now present an updated version which has been expanded to include connections involving SCL, the Tchenguiz brothers, collapsed Icelandic Bank, Kaupthing, various oligarchs and even more members of the Trump regime — and even an interesting link to WikiLeaks founder Julian Assange.

As with the first version, this is just a snapshot of my current progress. Some of you might (rightly) take note of conspicuously missing individuals and organizations or connections that should be included. All I can say is that it's a work in progress and I intend to keep working on it as I have time. 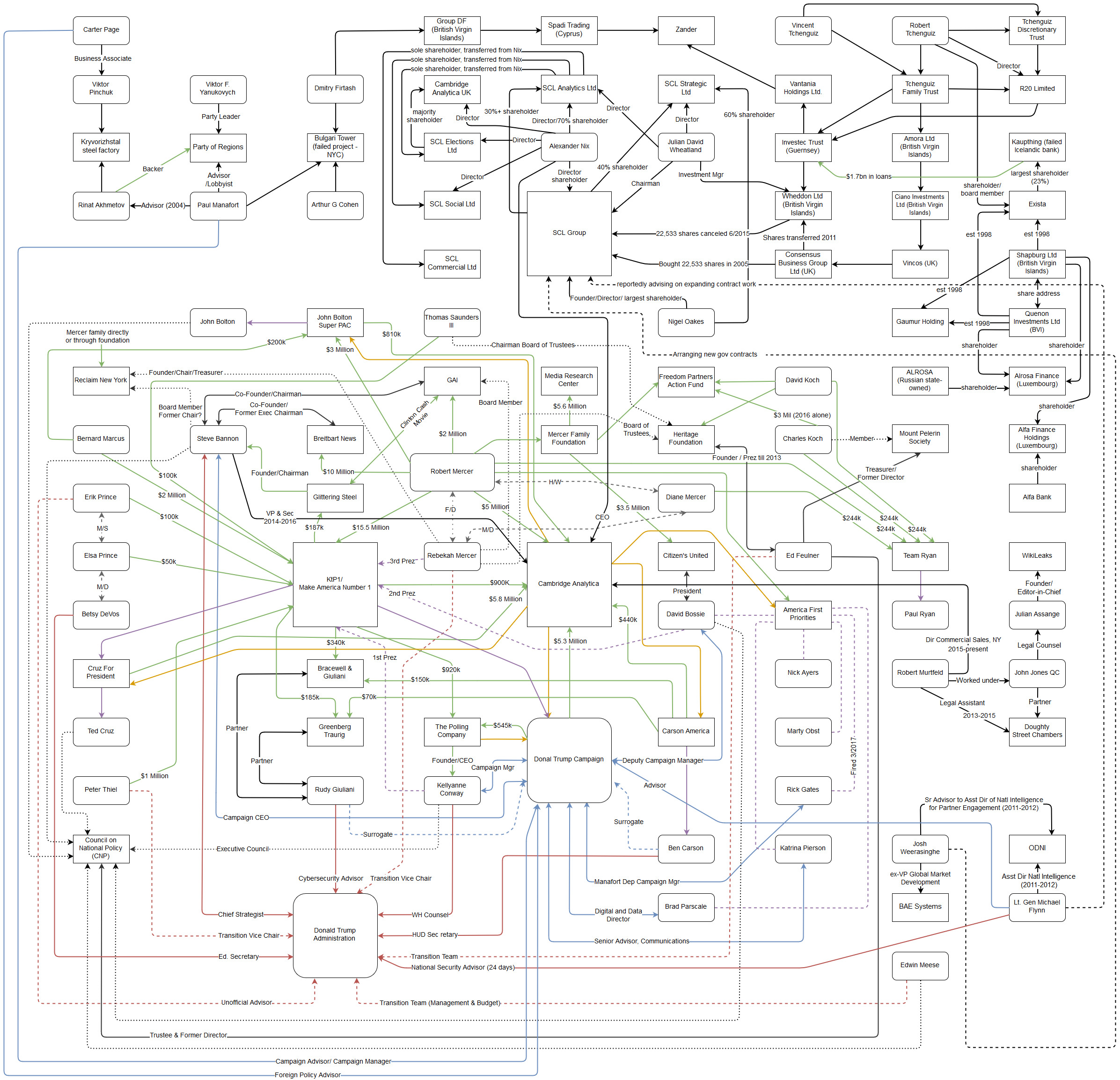 From 2005-2015, notorious British (Iranian-born, ethnically Iraqi-Jewish) playboy and sometimes billionaire mogul, Vincent Tchenguiz, owned 24% of SCL Group stock. It's unclear how he became involved with SCL in the first place but he soon installed his man, Julian Wheatland, who has been officer for many of Tchenguiz's enterprises, as Chairman.

What seems less mysterious is why Tchenguiz might have (at least by all appearances) divested his 22,533 shares in June of 2015 — SCL was getting into the electioneering business in the First World and due to their shady dealings with collapsed Icelandic bank, Kaupthing, Vincent and brother Robert had some serious baggage. Though by all accounts the SFO investigation was horribly bungled — the brothers eventually received apologies — the fact remains that at one point, 40% of the bank's capital was tied up in the brothers' investments, managed by brother Robert who also happened to be a shareholder and member of the board of Exista, the largest shareholder of Kaupthing.

That's just the beginning of the story. Turns out that way back in 2005, Danish journalists dug up the dirt on the Icelandic banking industry and tied Exista (its most recent name) and another holding company to... you guessed it... the Russians. Strange that ATS, the foremost conspiracy website on the Internet, has been relatively silent about all this. It's a CT goldmine.

What's perhaps most interesting regarding Tchenguiz and SCL is that despite his shares being canceled for a price far below their value, Wheatland is still the SCL Group Chairman and a director of SCL Strategic, one of a constellation of SCL companies established by Cambridge Analytica CEO, Alexander Nix (who with his mother and sister, own a controlling share of SCL Group) and the only one that is majority owned by SCL's founder, Nigel Oakes.

Then there's the ties between Victor Tchenguiz and Dmitry Firtash, a Putin-pal who was part of the failed Bulgari Tower (a $900 million deal) with Paul Manafort. Not shown (yet) in the diagram, Tchenguiz once dated the redhaired Russian spy, Anna Chapman, who was part of a spy ring hosted by an executive from VEB — yuuuup — the Russian bank whose chairman Jared Kushner had a meeting with and forgot to mention in his application for security clearance. Whoops!

In my research, I also discovered that disgraced former National Security Advisor, Lt. Gen Michael Flynn, has been working for SCL Group:

SCL’s effort is being driven by a former aide to now-departed national security adviser Michael Flynn, who served as an adviser to the company in the past.

Not only that, one of his aides, Josh Weerasinghe, who worked for Flynn at the ODNI (2011-2012) before a 5 year stint as an VP for Global Market Development at defense contractor, BAE Systems, is reportedly helping line up contracts for SCL here in the US.

Speaking of market development, that brings me to perhaps the single strangest connection shown here:

Robert Murtfeld, SCL's Mercer-funded US subsidiary, Cambridge Analytica's (I've seen claims of Tchenguiz owning part of CA but have been unable to confirm myself through records searches) Director of Commercial Sales in NY. Turn's out Mr. Murtfeld was previously a legal assistant at Doughty Street Chambers, and worked for... John Jones QC, Julian Assange's deceased lawyer!

Robert Murtfeld organised a dignified remembrance event in honour of John Jones QC in New York on 2 June 2016. John sadly died last month and Robert who had worked with John at the ICC on the Saif Gaddaffi case, organised this event to honour a great lawyer who was a dear friend to us all.

What does it mean? Who knows but it seems like one hell of a coincidence doesn't it?
edit on 2017-4-12 by theantediluvian because: (no reason given)

So when are you going to make a thread about all of Clinton's connections to Russia?

Without getting into the meat of your thread, I just wanted to say your map is very impressive. I hope you can find a place to publish it.

I love this thread, however I didn't see Soros in there.

I'm sure some people will rip on this but what's wrong with a little transparency?

Good Lord, man. I've told my husband that for me to explain what I know about the connections regarding money laundering, hacking and counter espionage surrounding Trump and his campaign, I would need a very large "CSI Case wall" with color=coded strings connecting between things and photos and documents...and I don't have nothin' on you, Ante. That's incredible work!

In regards to your map, could you also elaborate more on the connection between Julian Assange and Cambridge Analytica?

Clinton has many nefarious ties to Russia, let alone countries in the gulf states.

With all of the time spent and analytic detail being utilized by the OP, it would be interesting to see what he could come up with in regards to the Clintons.

I love this thread, however I didn't see Soros in there.

I'm sure some people will rip on this but what's wrong with a little transparency?


?
Why don't you show Ante where Soros is supposed to be in his map, then?

Or if you want to put in countless hours to making a "Clinton Map" then by all means, go for it!

But this thread isn't about Clinton. That is a deflection. And deflection is a form of defensiveness, no?

Flagged you for the effort alone, although we never agree, I admire your fervour when it comes to your investigation skills.

I can't believe any Trump supporter would have the nerve to try to shift this to the democrats- they should be too embarrassed after being so wrong about Trump.

That was a positive post I left. And the thread is about billionaires in the swamp.

I didn't bring up Hillary, you did.

And as long as people attack one side or one party then these billionaires will be safe to propagate their agendas.

While you may see everything as right or left, I do not, they are two large cogs powering the same machine.

originally posted by: CB328
Excellent job, despite that deflection attempts.

I can't believe any Trump supporter would have the nerve to try to shift this to the democrats- they should be too embarrassed after being so wrong about Trump.

I'm sure your open armed statement will offer a different mindset for them.

IMO anyone being blatantly decisive is the only thing protecting the one party system. The establishment.

Ever heard of the six degrees of separation theory? If you keep going you'll even find your name on there.

Six degrees of separation is the idea that all living things and everything else in the world is six or fewer steps away from each other so that a chain of "a friend of a friend" statements can be made to connect any two people in a maximum of six steps. It was originally set out by Frigyes Karinthy in 1929 and popularized in an eponymous 1990 play written by John Guare.

originally posted by: CriticalStinker
a reply to: AboveBoard

That was a positive post I left. And the thread is about billionaires in the swamp.

I didn't bring up Hillary, you did.

And as long as people attack one side or one party then these billionaires will be safe to propagate their agendas.

While you may see everything as right or left, I do not, they are two large cogs powering the same machine.

My apologies. I must have added a "tone" to your post in my head that you did not intend. It's easy to do that on the internet, especially when things are so partisan. As to Hillary, I usually expect that "Soros" is supposed to be connected to "the left" and thus made an egregious leap to an erroneous conclusion. Again, my apologies.

I am curious, still, where you think Soros fits into the picture with Trump? Does he? This is a sincere question.

On top of the fact that this map consist of mostly 1%ers, it's not a surprise they are all connected in one way or another.

All is good, we're all adults here, I can take a lick.

I don't trust Trump more than any other politician, so not at all.

Soros is notorious for toppling whole countries economy's for financial gain. He could fit in with any administration willing to topple countries or governments. His influence doesn't has to be direct with all his shell companies/entities.

My charged suspicion is after the Syria strike.

posted on Apr, 12 2017 @ 08:48 PM
link
There are quite a few information dense articles that I've stumbled across in my research which greatly facilitated this expansion. Not least of which are these two:

Here are links to some of the resources I used. If anyone wants links to a source for a specific connection, let me know.

My understanding from what I've heard (no source for you right now - just pulling from my brain) is that Cambridge Analytica may be directly connected to information supplied by Russian hackers for the purpose of assisting in target-marketing for Trump's campaign.

Have you heard this too? I'm not sure it's proven or just a "theory" from someone trying to connect the dots...

It is only one small piece of a massive conspiracy theory...and a juicy one at that.

ETA: one source for the hacking of voter information... Officials: Russians Took Information from Voter Registration Rolls
edit on 12-4-2017 by AboveBoard because: (no reason given)


Okay - theory goes that Russia hacked voter registration information and that it shared this information via the private server in Trump Tower that was "talking" exclusively with Alfa Bank in Russia. The server seems so strange - they claimed it was just "advertising" but data analysts said it was very clearly a two way communication... ??? That alone is a huge mystery.
edit on 12-4-2017 by AboveBoard because: (no reason given)

So when are you going to make a thread about all of the Clinton's connections to Russia?

When you start making threads about the connections of the members of the team that won the election.