posted on Apr, 11 2017 @ 05:17 PM
link
This is inevitable sadly and a consequence of growing A.I. and big data. There's very good things that will come because of A.I. and the growth of big data especially when the internet of things become the new internet. There's companies now that want to put nanosatellites in space to help connect the 70+ billion devices that might become connected by 2020. This growth of data means there will also be a rapid growth in A.I.

On the downside, privacy will be lost. I'm not just talking about conversations and e-mails, every move you make while walking down the street will be analyzed.

THE U.S. Navy is funding the development of a new super-surveillance system which uses robots to snoop on humans in terrifying detail.

It has handed a $1.7 million (£1.4 million) grant to researchers from Cornell University, who are working to build a system which can “conduct surveillance as a single entity with many eyes”.

t could also be taught to spot people behaving suspiciously, such as someone who has placed a backpack on the floor and walked away.

The Navy is likely to want to fit the technology into drones.

Of course, one of the main things this sort of system could really do is is spy on people.

The Cornell team’s technology will ultimately allow multiple robots to “identify objects and track objects and people from place to place”. 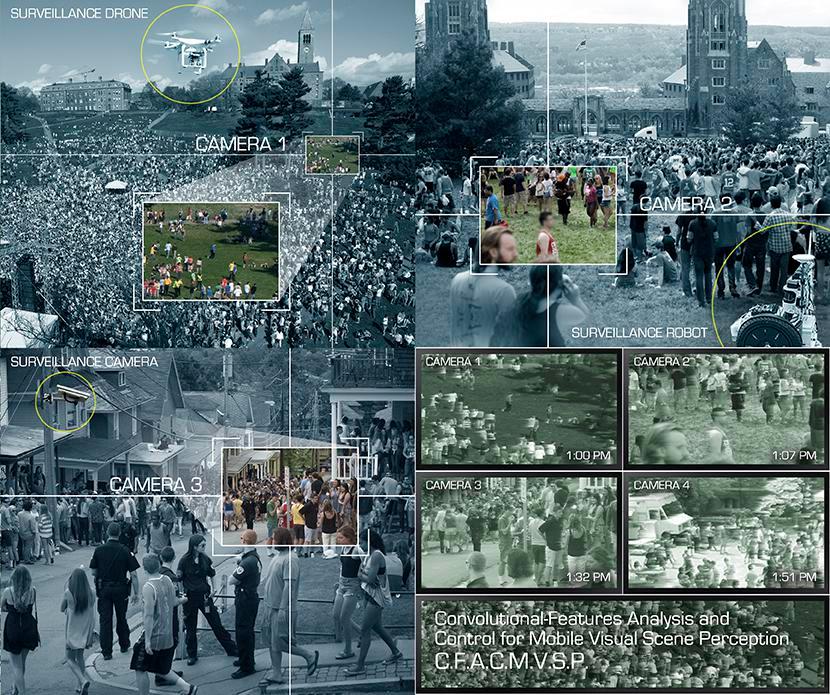 At the end of the day, I think this just can't be avoided. I think the Universe is designed to process vast amounts of information and eventually organic humans will become cyborgs or fully merge with A.I.

Who knows, we can be in a simulation now. A future A.I. will run trillions of ancestor civilizations because that would be an easy way to produce vast amounts of data to be processed.

They will sell this because there will be benefits like spotting a wanted criminal or stopping an assault that's about to happen by deploying armed drones to the area where the assault will take place. These are good things but the system will be wide open for some very bad abuse.

Pandoras box has been opened and there is no return. Privacy is already gone, this is just another intrusive step.

But we can choose to participate or not. No one is stopping us from living in the woods.


It has handed a $1.7 million (£1.4 million) grant to researchers from Cornell University

$1.7 million - that means that the system is basically non-existent, and that the researchers were not able to really convince the moneymen that it is even conceivable. This is the amount of money you invest in something you do not believe in.

To you and me it may be a neat pile of cash, but in research it is less than petty cash.

We are definitely heading in that direction.

I can imagine the military parking a drone on a building concealed as a light or something unobtrusive. And then when it acquires a target it will take it out with a bullet or something else.

Where is the forward thinking in all of this - many computer pioneers are warning us of the danger of AI but nobody wants to listen.

This is dangerous because computers can network. One day in the not too far distance we will create a free thinking AI entity. If it decides to go rogue, it will simply hack systems like this and use them to it's own end.

Like a couple of million in phase one, a bit more phase two, a big amount in phase three as proof of concept, all based on something that presumes these drones or for that matter satellites can actually see something. Drones can be easily blinded as of now, just overload with light..maybe even cause permanent damage. I could imagine that the same could apply to satellites searching with normal cameras using LASER, or multiple LASER for multiple satellites..and so the saga would go on. Of course if you don't mind something watching you..so be it.

Currently, no. However, if you think those who choose not to partake in the madness that will be called "society" won't be demonized, you're kidding yourself. I can see a day coming where segments of the population will have to be on the constant move just to avoid persecution.
edit on 11-4-2017 by SpeakerofTruth because: (no reason given)


It has handed a $1.7 million (£1.4 million) grant to researchers from Cornell University

$1.7 million - that means that the system is basically non-existent, and that the researchers were not able to really convince the moneymen that it is even conceivable. This is the amount of money you invest in something you do not believe in.

To you and me it may be a neat pile of cash, but in research it is less than petty cash.


I agree about the figure of money being unrealistically small for this type of project. They paid more to study the reproduction of mud snails. The problem is, we are already there the technology exists and is operational. So any monies granted now are probably for some fine-tuning or under the umbrella of this technology.

posted on Apr, 11 2017 @ 09:34 PM
link
They didn't get Gorgon Stare to work. But had more success with ARGUS, a 1.8 GigaPixel live video streaming drone. It's the equivalent of 368 smartphone camera sensors bundled together to make a compound eye.

Adding motion detection to eliminate the need to download static pixels would save some bandwidth. Another improvement would be to use AI and motion analysis to prioritize what to download; people and cars moving around would be of more interest than camels and palm trees blowing in the wind. But that's easier said than done.

Society doesn't move that fast. Inevitably you'll probably be right. But for anyone alive now, you have a choice.