Everyone has lost their minds


I haven't seen this many soiled diapers since I visited a nursing home.

Where were you the last 8 years? haha The Obama Hillary hate could have filled a stadium with soiled diapers.

Yes I like the Redneck's statement also, although I wouldn't defend it is absolute. I try not to lose my mind over all this, especially because one, as mentioned, we will never know all the details involved and two what can we do about it, aside from write our congressmen?

I will say this, I do think there should be no war,particularly boots on the ground, without approval from Congress.
Outside of that I would like to maintain cool head, cross reference sources for clearest picture and discuss with tact and minimum emotion. My pledge…

I won't stop either.

I'm just not going to fantasize about global nuclear war to fit my world-view of doom-a-geddon.

I dont think there will be nuclear war either provided Trump does not take matters further.

What he did was a measured response I cant fault him on that.

I disagree with Trump on this.

I'll probably disagree with him again.

But with Obama, it was legitimate.

I know, the same crap went on with Obama. Maybe because I dealt with it then, I can readily see it now.

posted on Apr, 9 2017 @ 02:13 PM
link
I find it really fascinating that people seem to just "know" what the intentions are, what the purpose is, what the outcome will be and that they seem to have it all figured out...

You guys work with the government or the big boys in charge?

I disagree with Trump on this.

I'll probably disagree with him again.

With some people like me, we expected some backtracking there where non negotiable things, in fact i think most people have a fe wnon negotiable isdues.
One of mine was military adventurism.

Now I respect that it might not have been a core issue for you, but for many it is and would be like Trump backtracking on immigration and declaring that the USA has complete open borders.

An advanced case of "buyer's remorse" among those who support/supported Trump, believed him when he said, in effect, that HE wouldn't bomb Syria.

But reality is cold and sometimes cruel.

And "hero" sometimes have feet of clay.

No one seems to know exactly what is really going on, and that makes everyone nervous,

Especially those who fervently hoped that things would become "simple" again, once "the man who couldn't be bought" was in office.

Tough to learn that everyone has a price.


That's utter nonsense sorry. The truth is the silent majority still supports him but the ant-trump crowd is yelling the loudest and people only pick up on that. Trump never said he wouldn't go to war. He just stated that he doesn't want to but if they force him he would try to find a diplomatic solution first.

I've got my own conspiracy. I think that this is all a calculated plan to push Daesh to reveal themselves. Daesh tried to cash in on the surgical strike and got their asses handed to them. They started a large offensive at the jordanian border and US and jordanian troops decimated them together. It seems Trump is tired of waiting around and is now mounting a joint operation to force Daesh to retreat or crush them once and for all. The whole russian narrative is just white noise to keep Daesh in good spirits and to force them to counter attack again. That's what i would do.
edit on 9-4-2017 by Perfectenemy because: (no reason given)

It's all right to be conspiracy minded, but common sense, like Elvis, has left the building!

posted on Apr, 9 2017 @ 02:26 PM
link
Well look at that it seems like Trump is very persuasive when it comes to change the views of some world leaders. Even the chinese government is now on board and agrees with him on North Korea. It's about time. Fat Kim needs to know that the world doesn't tolerates his bs no longer.

The only thing I want out of DC is term limits.

What, exactly, is the "utter nonsense" you are referring to?

And who are "the people" who are "picking up on" what the "anti-Trump" folks are being so loud about?

Could it be that "silent majority" you claim who are "still" supporting Trump?

They are not being very supportive if they are being swayed simply by the volume of the opposition.

As to the rest of your theory, only time will tell.

Since 9/11, the US has worked under new rules that allowed us to attack terrorist organizations virtually anywhere in the world without having to Congressional approval. Many other countries and internal groups in the US still think that policy is illegal and unconstitutional, but both Democrats and Republicans have supported it. That's also why new terrorist groups coincidentally appear in any region we need to attack.

Here's Ron Paul when Pres Clinton did it in Iraq:

And here's a Sean Hannity tweet from 2013 to show the double standards: 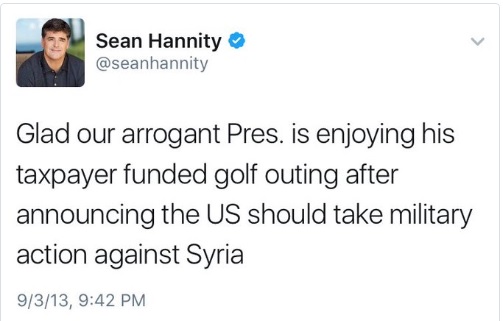 And here's a Trump tweet from 2013 about it, where he flat out claimed that the President needs Congressional approval before attacking Syria.: 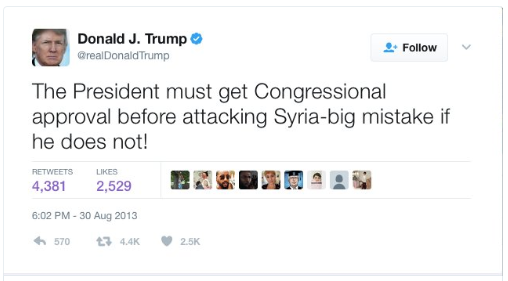 Many other Republicans are also saying the same thing right now.

What, exactly, is the "utter nonsense" you are referring to?

And who are "the people" who are "picking up on" what the "anti-Trump" folks are being so loud about?

Could it be that "silent majority" you claim who are "still" supporting Trump?

They are not being very supportive if they are being swayed simply by the volume of the opposition.

As to the rest of your theory, only time will tell.

Well the other side is doing a pretty good job to make fools of themselves. There is no action needed at this point. Btw the people you are referring to are still in the minority. The rest of the world doesn't care about Syria or NK. They are just happy that they can watch the next episode of there favorite reality show and tweet about food porn. They signal virtue like crazy but if it comes to take any action they just shrug and convince themselves someone else should do it. That's our reality. Venezuelans cried for help and begged Trump to intervene because protesters died in the streets and how many protests against their government methods have we seen in the last few days? Zero!
edit on 9-4-2017 by Perfectenemy because: (no reason given)

I'm sure if Trump does or did something illegal, everyone will impeach or hang him.

Iraq , Libya , Iran , China ,Russia or even the climate is going to get us ... I think they must all fear peace the most .A quiet time to focus on our internal BS seems to be avoided at all costs .

originally posted by: AnkhMorpork
I want to talk about Elvis..

Iraq , Libya , Iran , China ,Russia or even the climate is going to get us ... I think they must all fear peace the most .A quiet time to focus on our internal BS seems to be avoided at all costs .

People in a perpetual state of fear are easier to manipulate.

Nah. People will talk about impeaching him but that's it. I doubt the House Repubs would vote to impeach him, and that's the first step in the impeachment process. Then the Senate would have to hold an impeachment trial against him and vote to convict him on the charges. I just don't see a Senate controlled by Republicans doing that. A Senate controlled by Republicans refused to convict Pres Clinton during his impeachment process, so I highly doubt they'll do it to a fellow Republican.

As for the hanging part, I don't want that. I'd rather he face his accusations head on and lose both in a court of law & in the "court" of public opinion.