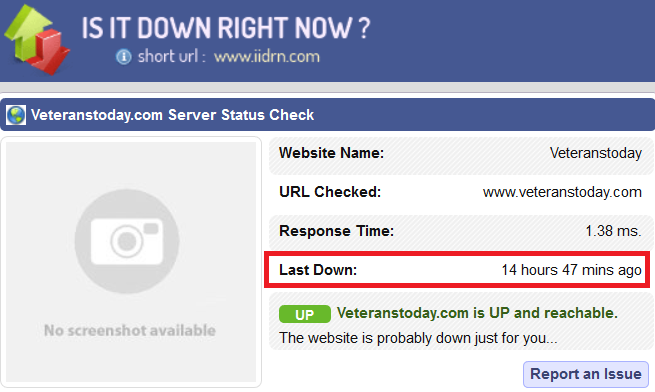 This is what allegedly happened...

Sources at the highest levels of America’s intelligence community warned Veterans Today that President Trump acting with select members of his team including General McMaster, ordered Veterans Today taken down.

We have much more to tell. We are now officially enemies of the gangsters that have taken control of America’s military and security apparatus. Wish us luck, we are all you have left.

If true, the attack may be directly related to VT’s latest front page assault. It certainly doesn't look appealing for Trump or US Military intelligence. Dissenters beware, there's a new sheriff in town. 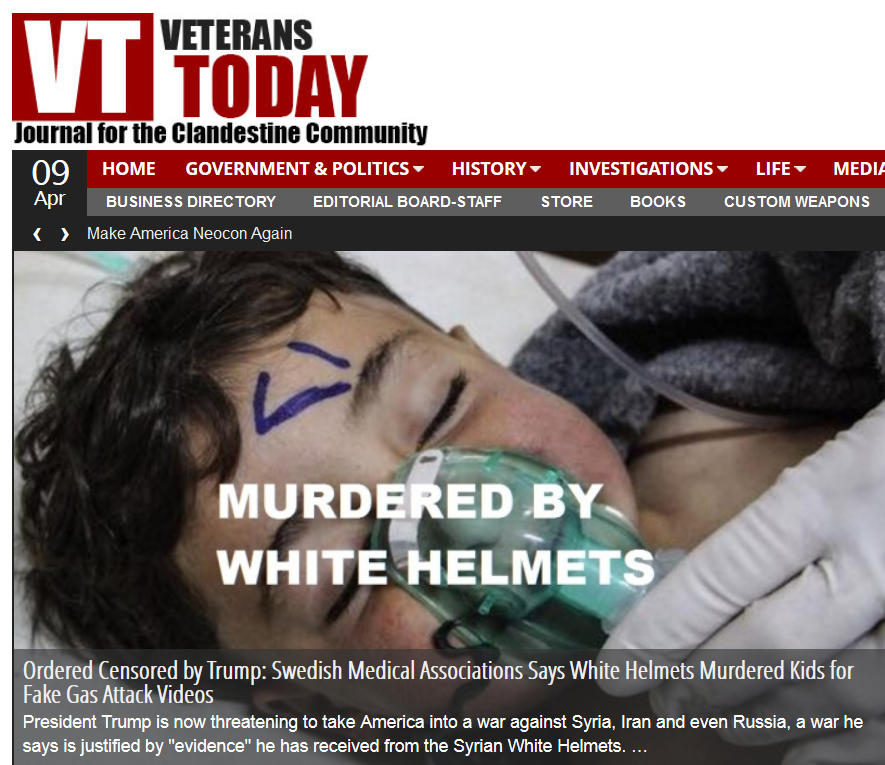 Now, before you lose your mind over the headline, check this out…

The site “Veterans Today” published an article with the title “Swedish Medical Associations Says White Helmets Murdered Kids for Fake Gas Attack Videos”. This formulation is utterly inaccurate and do not represent our true position on the issue, neither what SWEDHR is as independent NGO organization of human rights, nor the conclusions reached by the doctors examining the White Helmets videos.


I find a lot of interesting stories that lead me to search in places and makes connections that I otherwise may not have discovered. With that said, Veterans Today is as sensational as all the other fringe conspiracy media outlets. They do, once in a while, hit a home run.

I thought ATS would like to know that we could possibly be next. Buckle up and get those back-up servers primed and ready. I’m afraid the tides of free speech may be turning. In fact, I think VT's website is still being attacked periodically as the day goes on.

Until the KILL SHOT arrives.

Trump would not attack ats, where else would he get his news from?

Of course , I'm sure he has undisputable proof to back up those allegations.

So a web site is shut down because of criticism of the Trump administration?

Is this what is being alleged?

I think, but may be wrong, what's being alleged is that somehow Duff got word that Trump ordered his site (Duff's) shut down because VT ran a story wherein somebody claims people in Syria murdered kids to support the chemical attack narrative.

But the story that people murdered kids in Syria may be entirely false, partially false, or unintentionally false. Or true.

Buuuuuuuut the story about that story being the reason their site is down may itself be false, partially false, or unintentionally false. Or true.

Yeah well what can i say. That what you get for sitting on your lazy a. and cry over your goverments rouge actions and not doing anything about it. And no voting and protest is not doing something. I am more refering to what your ancestors did, you know the once with balls who who started the revolution. You know those real americans who died fighting their goverment for what they believed in. Not the once who fly half way around the world to kill, rape and steal from the innocent in foriegn lands

So I will remain skeptical.

Of course, I'm sure he has undisputable proof to back up those allegations.


This is the closest thing to Duff's version of the "truth." References for both links are at the end of each article. Everyone needs to seriously ask themselves if they can trust their government to relay the truth.

‘Lifesaving’ procedures on the children showed in the White Helmets videos were found to be fake, and ultimately performed on dead children. The syringe used in the ‘intracardial injection’ performed on the male infant was empty, or its fluid was never injected into the child. This same child showed, briefly, discrete life-signs (uncertain in my judgement) in the first segment of WH Vid-1.

If so, this child might have died during the lapse in which the ‘lifesaving’ manoeuvres showed in the White Helmets movie went on. (Which is not the same than affirming that the personnel seen in the videos caused the dead of the infant. In forensic terms, the actual cause of death, as well as the mode and the issue of intent, refer to different items than those treated in our analysis).”

There may have been a real chemical attack and people suffering as a result, but don't put it past the CIA to use clandestine terrorist cells and Special Forces to pull such a stunt, while the White Hats manipulate the public's perception back home.

And if anyone is wondering why these people's opinions matter...

“SWEDHR is a non-profit, non-governmental organization formed with the participation of Swedish professors, PhDs, medical doctors and university researchers in the medical sciences and health-related disciplines, devoted to international issues in the human rights front.

I think I got it.

A much more concise summation of the story than mine. Well done

posted on Apr, 9 2017 @ 12:01 PM
link
That far-reaching 1984ish surveillance state that Snowden and others risked life and limb to expose, is now under the control of this man.. 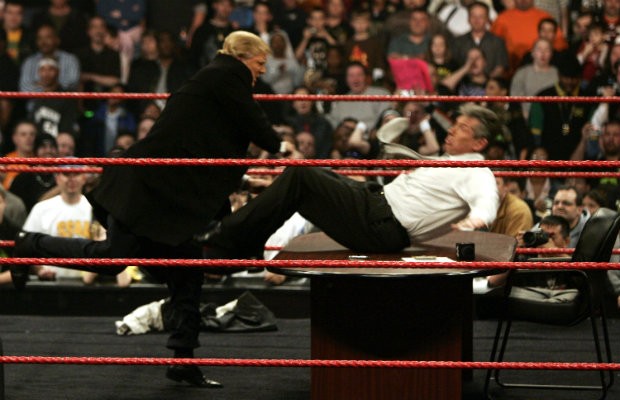 I have dropped as many bread crumbs as I can , trying to point you youngsters in the direction of truth to no avail.

GD, has nothing to do with all of what's taking place.

The thing I find most amazing, is there are leaks everywhere, and not a single one has been posted.

I'm not going to break OpSec and post or discuss them.

But you have the ability to do so.

originally posted by: Shamrock6
a reply to: DBCowboy

I think, but may be wrong, what's being alleged is that somehow Duff got word that Trump ordered his site (Duff's) shut down because VT ran a story wherein somebody claims people in Syria murdered kids to support the chemical attack narrative.

But the story that people murdered kids in Syria may be entirely false, partially false, or unintentionally false. Or true.

Buuuuuuuut the story about that story being the reason their site is down may itself be false, partially false, or unintentionally false. Or true.


Geez Shamrock are you Donald Rumsfeld?

A simple thumbs up or down if you'd please? If that is NOT what you were referring to, I will have to draw the line here, since the source of that information is not ATS friendly.

I hope the Mods at least allow me to post these: 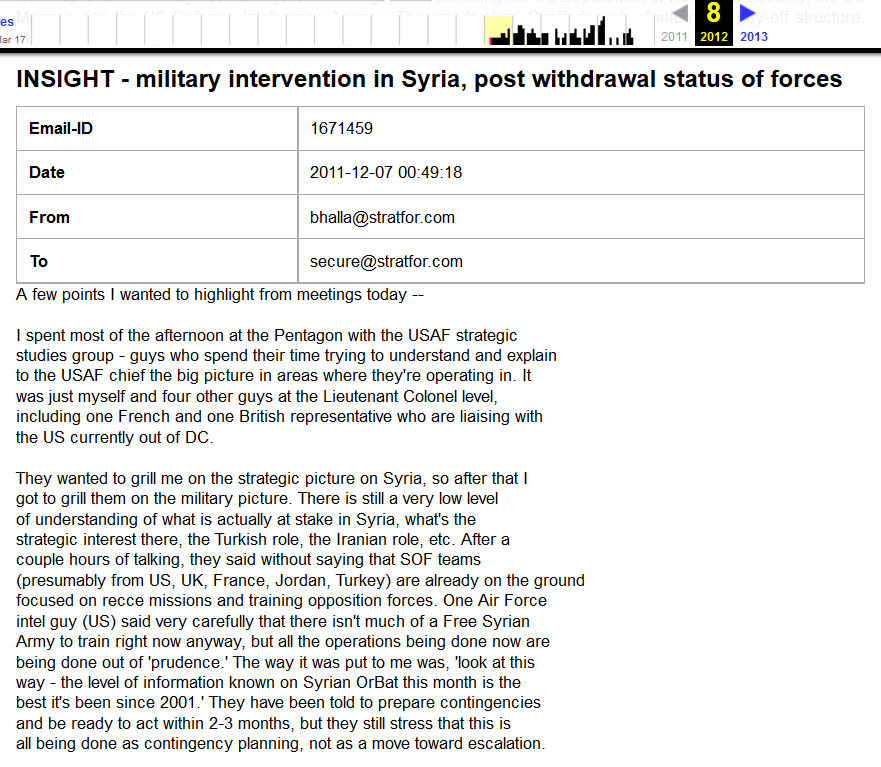 “After a couple hours of talking, they said without saying that SOF teams (presumably from US, UK, France, Jordan, Turkey) are already on the ground focused on recce [reconnaissance] missions and training opposition forces,” states the email.

Bhalla goes on to describe how the mission of the undercover commandoes is hypothetically to “commit guerrilla attacks, assassination campaigns, try to break the back of the Alawite forces [Assad’s support base], elicit collapse from within.”

In other words, the Pentagon, along with other NATO powers, have already directed Special Forces troops stationed inside Syria to carry out terrorist attacks and assassinations in an effort to topple President President Bashar al-Assad.

I'm not, but one could ask Gordon Duff if that's where he got his ideas from. He's the one I was parodying there . Duff owns VT and has openly admitted to lying.