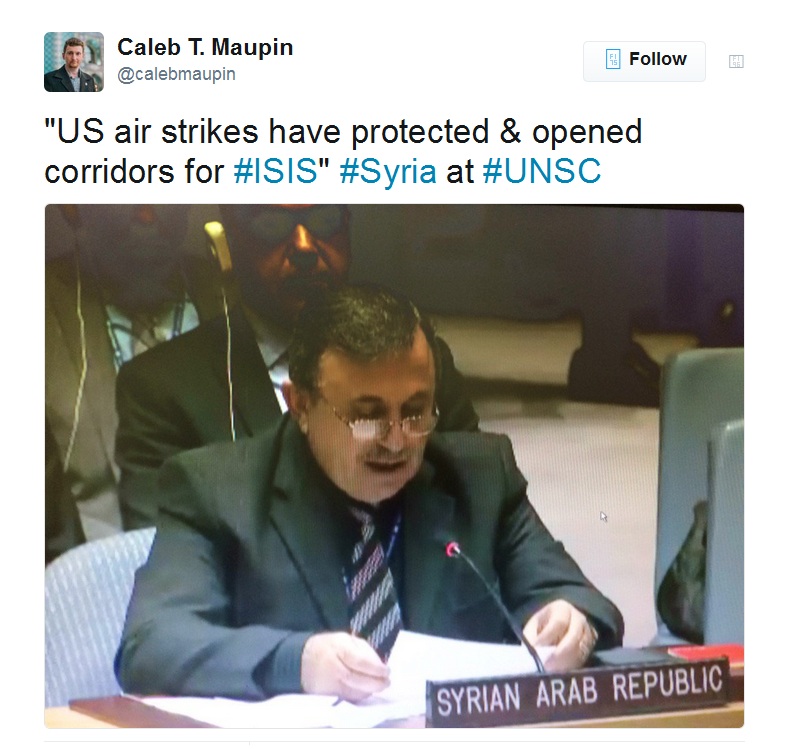 The US missile strike in Syria “only facilitated the strengthening of terrorism,” Russia’s representative at the UN Security Council has said, adding that it shows Washington is “afraid” of a “real investigation” into an alleged chemical attack in Syria.


Some harsh words from Russia and others.

They are saying that our government is scared of a real unbiased investigation as to who was behind the attacks.

That our actions only helped to embolden the terrorists.

Many would argue that under Obama, we were essentially allied with the "moderate" rebels and ISUS against the Assad government.

The Russian ambassador made a lot of interesting points, including the presumption of innocence:

He also criticized Washington and its supporters for having put aside the UN’s “golden standard” of the presumption of innocence, saying that in the case with Syria it had been ignored. 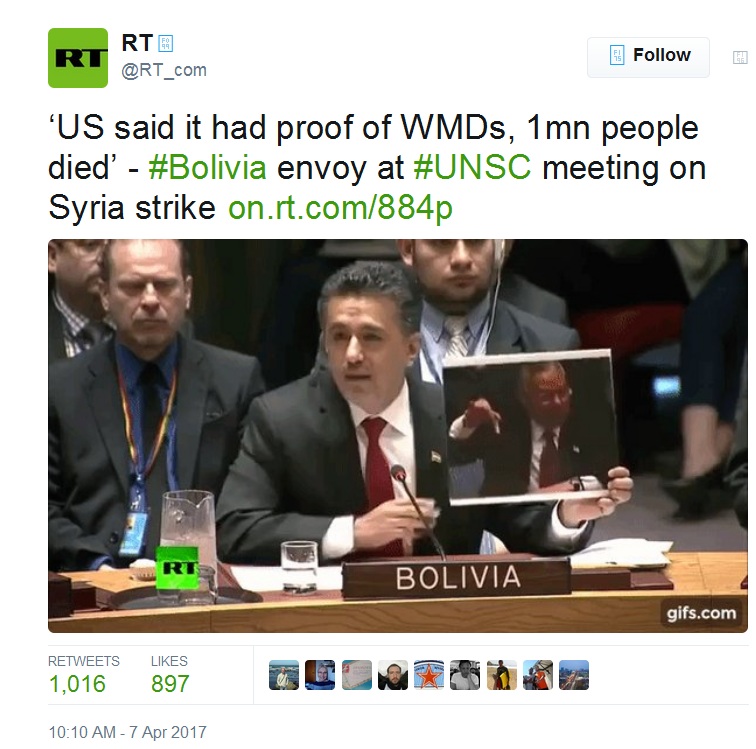 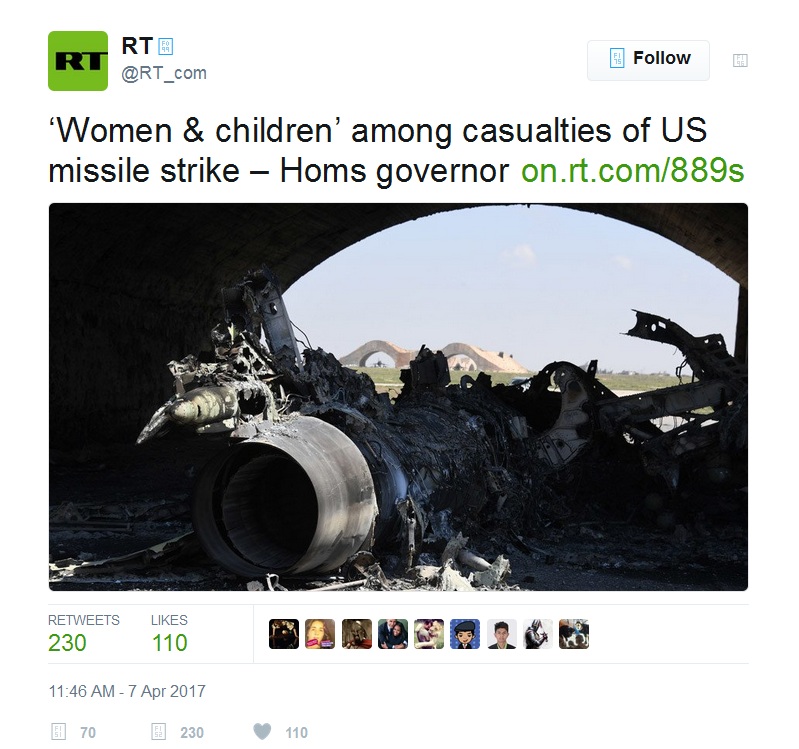 And when it is pointed out how bad the agenda pushing is, people still don't care because they're either too stupid or too busy

(post by Willtell removed for political trolling and baiting)
rickymouse

posted on Apr, 7 2017 @ 06:55 PM
link
I think that a full investigation as to identifying the chemical weapons delivery should be done. We already know that won't happen now because we bombed Syria. I think that the scientists at the UN should be sent and Russian scientists should be there to along with experts in identifying what kind of bomb was set off. If it is found it was delivered by the syrian jets, then the action of the USA bombing that base is appropriate.

You have to question everything nowadays, nobody tells the whole truth anymore.

posted on Apr, 7 2017 @ 07:10 PM
link
Well, a full and fair investigation will show that the CIA has been facilitating chemical weapons deliveries to Al-Qaeda and their "moderate" opposition comrades from Saudi Arabia.

They sure as hell don't want that getting out. How embarrassing, and disgusting.

I read your comments the most. I agree with the above

HAAAAAA....Its Russia whose afraid of an investigation. And Bolivia? Seriously?

Someone could say that this forced Bolivia to defend the actions of Assad, thereby starting the investigation.


Santa Cruz de la Sierra, (SANA) Bolivian President Evo Morales reiterated his country’s support to Syria under the leadership of President Bashar al-Assad in its war against terrorism and the imperialistic hegemony. The remark came during a meeting with Syrian ambassador to Venezuela Ghassan Abbas on the sidelines of the activities of the G77+China summit held recently in Bolivia with the participation of Syria.


This article is from 2011 and speaks about the strange relationship Bolivia has with Syria.


With their openly antagonism against free enterprise practices and open market activities, this government engages in questionable relations; along with the ALBA alliance Bolivia has with Venezuela, it embarks more and more with regimes like those of Iran and Syria.

Maybe you can find more.

Women and children among military jets.....

posted on Apr, 7 2017 @ 10:28 PM
link
I don't see any military reason Assad would use chemicals. He could just as well strike with normal HE bombs.

That makes me think maybe the Syrian AF hit Hillary's chem weapons depot, which got dispersed into the neighborhood. Sure it's irresponsible to store this material in a civilian area, but it's also reckless to bomb it there too. This is what Assad may be guilty of, poor targeting.

I have no problem with Trump punishing Assad for this, it also suits other agendas. It also supports the concept that Assad will have to accept UNited Kurdistan. or whatever it's called....it's real as of a week ago. US also maneuvered into a blocking position against the SA, Russia into a blocking position against Turkey to the north. I believe the plan is to liberate Raqqa jointly. I don't think the missile strikes have much to do in regards to US vs RU....they are just following a script that cuts Assad loose, welcomes Kurdistan, severs the Shia Crescent from Iran to Hezbollah. Iraq is now pursuing a policy to get Iran out of the country.

Trump is cleaning up with the most minimal effort.
edit on 7-4-2017 by FlyingFox because: freedom

Sorry for tinyurl.
edit on 7-4-2017 by DeepRomani because: Fixed link

posted on Apr, 7 2017 @ 11:10 PM
link
I was mentioning to a friend today that if you do not support Assad, you support ISIS. Its just that simple. Enemy of my enemy.

If Trumps intention was to go after ISIS (main plank of his campaign, actually), he just did the exact opposite, and undercut any efforts.

The "harsh words" from Russia are spot on here. Trump stepped in a big pile of his own empty promises.

U.S. 'backed plan to launch chemical weapon attack on Syria and blame it on Assad's regime' Leaked emails from defense contractor refers to chemical weapons saying 'the idea is approved by Washington' Obama issued warning to Syrian president Bashar al-Assad last month that use of chemical warfare was 'totally unacceptable'

This weeks event was hopefully not from the same Rebel Alliance, but it could have been. See, if the Rebels did the last one, where it'd widely known they were the origin, it seems like an obvious play to do it again.....and let the US get blamed for a FF because the Rebels are or were supported by anti-Trump forces.

In short, a Hillary-Rebel Sarin FF, were the US is indirectly blamed, but Trump had no part of it....so Trump wisely uses the event against Assad now, and the Rebels later.

Id be interested to know where any "missed shots" hit.

The speed we moved at is very suspicious. And it ain't the only stinking fish in the market.

Was thinking the same thing. Ya right

Pictures of the airbase after Trump's stupid missile barrage are online. Certainly doesn't look like it's the victim of 59 tomahawk missiles.

originally posted by: Crumbles
a reply to: Aeshma

Was thinking the same thing. Ya right

Why? Military personnel have their families on bases more often than not.

This is especially true in Syria, since the military facilities are the easiest to defend people tend to congregate in them, like some weird medieval fort.

This was in the can since back then, and they pulled it out to fool Trump into attacking Assad.

Its really hard to say but both the US/Turkey/Qatar oil pipeline and the Russia/Syria/Iraq/Iran pipeline is in the same area as the base.

originally posted by: bigfatfurrytexan
I was mentioning to a friend today that if you do not support Assad, you support ISIS. Its just that simple. Enemy of my enemy.
.

Actually it's not that simple. Assad is not only fighting Isis but killing everyone who disagrees with him in the process. There is not much difference,if any, between Assad and Isis.