posted on Apr, 5 2017 @ 10:22 AM
link
Hello out there ATS! I hope you are having a fabulous Wednesday.. but if you aren't (and hey they can't all be good) then perhaps a bit of moody Queensryche is in order. 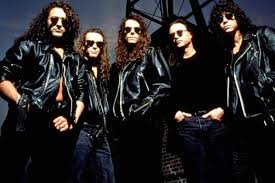 I've been giving this incredible album (Promised Land) a revisit the last couple of days. I bought this album when I was in 10th grade and wore it down. I remember it reminding me of everything I loved about Pink Floyd, but with a modern remake by talented amazing musicians.

But it is so dark. No wonder I was a moody teen!

Many Queensryche fans believe this to be the last good album released by this legendary rock band from Bellevue, Washington. Some like it best (though most would say Operation Mindcrime is their best).

Just take a look at the instruments used in this album, and the multi talented musicians playing them:

This album truly is a masterpiece. Chris DeGarmo wrote Bridge in response to his painful relationship with his father, who died during production. Promised Land is an amazing song. I just love the way Geoff sings those last couple of lines "of promised land.. lies". If you know the song, you may know what I am talking about.
The last track on the album really showcases Geoff's amazing voice while it was still at its peak.
Take a listen, and enjoy this great (ok a tiny bit hokey) album.
I'd love to hear from you, and your thoughts on Queensryche's work.

So, for some reason, I can't link the album so I'll post my favorite song (title track) and a link to the whole album on Youtube if you'd like to listen.

Operation Mindcrime, what an album.

Many many night frittered away listening and drinking to that one. Those were and weren't the days.

Who hasn't frittered a night or two away?

I'll say you picked a choice band to accompany those days

posted on Apr, 5 2017 @ 12:18 PM
link
I was lucky enough to see them perform just after the MIndcrime release. They are among the top live acts I have seen and I have seen all the best. I aspired to achieve the vocal range of Geoff Tate and got close. I even managed to accurately pitch Eyes of A Stranger, eventually.

Tate's voice was one of the most remarkable I've heard.
What an aspiration! I'm sure you worked hard to develop your instrument!

posted on Apr, 5 2017 @ 12:28 PM
link
Geoff Tate published a vocal tuition video that I never managed to get a copy of. Range wise he was a par with the likes of Bruce Dickinson.
a reply to: zosimov

A guitarist who plays the cello and sitar is deserving of respect in my book!

Exactly! I was pretty surprised to see which instruments were used on this album, and by whom.

I'm enjoying all these new sounds. Thanks again for sharing.

Hey there my ATS doppelganger
Thanks, as always, for checking it out! Glad you liked.

posted on Apr, 7 2017 @ 12:26 AM
link
Wow, a Queensryche thread. I could not log in fast enough when I saw this. I was one of the biggest QR fans ever. I have roughly 30 CD's from them, studio albums, live albums, singles, Collections etc, as well as everything they have each done since the split. Promised Land was always my favorite album and I think it still is. But It depends on what I want to hear now. If I want to hear an album that is pure genius and unlike anything anyone has ever done it's Promised Land. If I want to hear melodic tunes with Tate at his most mature as a singer, it's Empire. If I want pure Queensryche with Tate at the absolute top of his game and range, it is Operation Mindcrime.

To say it's a shame what happened to Queensryche and Tate is a huge understatement. He was already losing his vocal abilities by the time Promised Land came out. Compare his tone and range there to Operation Mindcrime and you can hear a big difference. In fact, by the time the empire tour was going on, he had already lost a little bit of his range. Deciding to start smoking 2-3 packs a day does that to a singer. He's absolutely awful now. Voice is completely shot, no technique, a shell of what he was. He likes his wine nowadays and it has completely dried out his vocal chords. It is hard to watch him now.

I tend to go on Queensryche benders a couple times a year and as time has gone on I has developed more appreciation for Hear in the Now Frontier, Q2K and Tribe as well but nothing compares to OM, Empire and Promised Land. I am I is 1 of my favorite songs of all time, Bridge and One more Time were the Empire type sound I wanted to hear from Tate, Lady Jane was awesome. Damaged just rocked, Promised Land was and is absolutely epic and Someone Else was haunting and truly special. Promised Land is an absolute masterpiece, 1 of a handful that they put out regardless of if they were still at the top of their game or not.

It's amazing to think that Tate was really only at his best for 2 or 3 albums. During that brief time, he was the best singer I have ever heard and they were on their way to being one of the greatest bands of all time. A tragedy that he didn't care enough to take care of his voice.

Thank you for this detailed and interesting post! I was really hoping to read something like this.. I have never listened to Queensryche's other albums as deeply as this one. I've heard Operation Mindcrime brought up over the years in discussions about greatest albums of all times, I'm sure I've heard it playing in the background countless times, love Silent Lucidity, but still can't claim I'm a big Queensryche fan-- mostly due to under-exposure (I'm a type that has to dive in the deep end, always).

When I bought this album (Promised Land) I was only 15, but I was sure I'd stumbled into something really incredible. I was young enough to internalize the passion, the emotion, and the talent the band had put into the album which, in retrospect, appears to be the upmost they had to give.

Tate's voice was truly remarkable and it is sad to hear how he damaged and wrecked his natural talents.

I appreciate your commentary on the band and the album. So glad you were excited to post in this thread!

btw: I plan on spending some quality time with OM this weekend. Thank you for the inspiration.

posted on Apr, 7 2017 @ 06:10 PM
link
I am looking forward to hearing your thoughts on it and any other of their albums you end up listening to. They are all very different from eachother. Enjoy.

Wow, okay. So I am listening now for the second time and the lyrics are just as relevant now as when it was written 30 years ago. His voice is masterful, and he reaches those notes effortlessly (so it sounds).
It is definitely an experience.
I'm very glad I gave this album a deeper look.

Also, reading the comments I saw one by someone who lived in Berlin during the cold war and was convinced this album helped bring the wall down.
He wrote that East Berliners risked imprisonment in order to share this bootlegged album.
edit on 10-4-2017 by zosimov because: (no reason given)

It is such a unique album and yes, for a handful of years between 86-91 or so, he did hit notes effortlessly. LIve performances at that time were pitch perfect to the recordings. Though this was their 3rd album, I feel like it was the 1st album that they got everything right. They matured as a band and Tate matured as a singer. Glad you are enjoying it.