Yes, that is, I am not very familiar with the pilots roles, you are right, they are complaining of problems with oxygen systems.

posted on Apr, 5 2017 @ 10:45 AM
link
A number of homes in the area have been evacuated, with families sheltering at a local school until it's safe to go home.

Also why was it carrying ammunition? Is that normal for test flights? Witness reports, live ammunition buzzing by him upon the crash.

They carry live ammunition on training flights all the time. They have to practice with the real thing occasionally to learn how to release them properly, and training rounds have slightly different characteristics than live rounds do.

As for debris, it depends on what happened. If he had an engine failure, it could have spit engine parts out the exhaust before he hit. The canopy and seat came down a decent distance from the impact area as well.

originally posted by: Zaphod58
a reply to: HawkeyeNation

They carry live ammunition on training flights all the time. They have to practice with the real thing occasionally to learn how to release them properly, and training rounds have slightly different characteristics than live rounds do.

As for debris, it depends on what happened. If he had an engine failure, it could have spit engine parts out the exhaust before he hit. The canopy and seat came down a decent distance from the impact area as well.

Ok cool, thanks for answering my questions! Makes perfect sense!

I'd be less worried about the weapons than that thrice damned emergency power unit. God that thing sucked. If he was having engine problems, which it sounds like, there's a good chance it activated.

We'd occasionally get an F-16 that activated the EPU. You could park it no closer than 100 yards from other aircraft, and personnel were allowed to be around it just long enough to secure the aircraft and get the pilot out and clear. Then it had to sit for a minimum of four hours.

The pilot landed about a mile from the crash site. The aircraft impacted roughly 200 yards from a home, and was at least partially intact. Officials could identify the wing and part of the fuselage.

The impact site was roughly 40 yards by 40 yards, but possible debris was found several miles away, and the debris trail could be between 8 and 10 miles.

A piece of potential debris found included a strong fuel smell according to a local reporter. This could indicate an engine part, and that the aircraft was shedding pieces well before impact.

originally posted by: marg6043
The pilot ejected and is safe.

The budgets cuts on the military and the air force is causing a lot of military pilots to go on a strike and refusing to do routine fly.

Some of the equipment the pilots use is no working properly and has not be updated in years.


I cannot say anything about jets, but I can confirm that just about everything our military has, is aging. Two examples:

I have a close family member who works at NORAD / Cheyenne Mountain. The computers are horrifically old, and they have to pirate parts from other old computers (since these aren't made any more) to keep them operating a little while longer. This doesn't make me feel safe at ALL. How easy would it be for a glitch to shut down our protection? I'm sure they have the same garbage they had in the movie War Games, probably from the same year.

Another close family member was sent to Kansas to work on our aging Army helicopter fleet because they're old and all need repairs. Super. Yeah, they're not as high tech as we imagine them to be.

I think they're spending all the money for new stuff on drones. Just an educated guess based on my circle of relatives and where they are, or were, assigned to work.

There are a lot of upgrades going on, but with some of the aircraft being upgraded it might as well be putting lipstick on a pig. Boeing just got an almost $169M contract adjustment for the F-15 radar upgrade. They added 34 more radars, for both the C/D and E model Eagles. The only thing is that the average age of the C/D fleet is approaching 36, and they're looking at about another 10 years or so before they have to retire them. 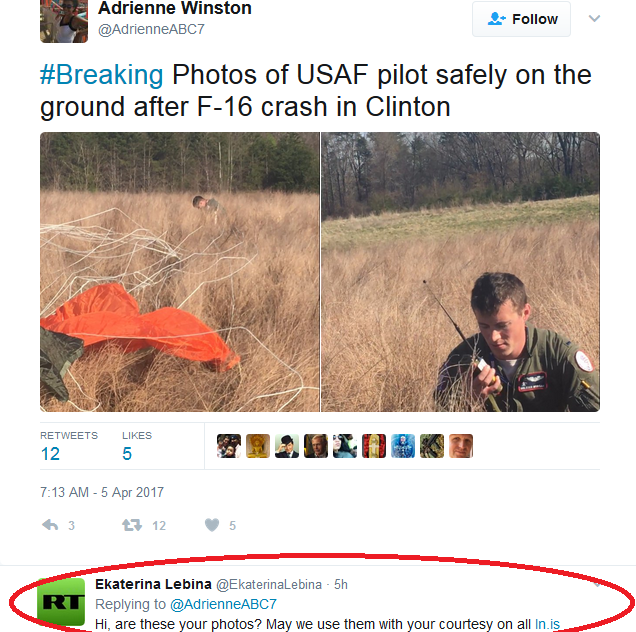 RT wasting no time to secure permission for the rights to use the photo.

They got lucky all around with this one.

ABC has a video that has the aircraft impact behind some trees, you can see the pilot under the canopy and his wingman flying behind him checking that he's ok.
edit on 4/5/2017 by Zaphod58 because: (no reason given)

posted on Apr, 5 2017 @ 03:28 PM
link
Like i'm sure everyone I'm glad the guy is still with us. We seem to be hearing of more and more failures so perhaps we need to turn the older stuff into tin cans and build more newer stuff while keeping a few for the museums and flyovers etc where they can get the total care as they only pop up off the tarmac every few months.

posted on Apr, 5 2017 @ 03:37 PM
link
This chart kind of puts things into perspective. These were the readiness numbers for the 2016 fiscal year. The first column shows the aircraft type. The second lists how many aircraft are in the inventory as of FY16. The third is where it gets interesting. This is the average age of the aircraft of that type as of FY16. Then it's the readiness rate for the last three years.

Notice how most aircraft are seeing lower readiness rates in each year. That's in large part a combination of parts availability and airframe age. The F-15s are undergoing extended fatigue testing to determine their ultimate life cycle and what will fail first. As it stands now, something like 95% are at or over their current life cycle.

All the good stuff goes to where the fight is. And is then usually just left there or destroyed because it costs more to haul it back then to make new ones. Funny how that works.

Looks like the cannabilazion cycle is driving down FMC rates only combat above 80% are the drones. Thanks Mr. Obamanista

posted on Apr, 5 2017 @ 07:56 PM
link
The pilot was part of a four ship mission to Pennsylvania for range time. The ammunition on board were training rounds for the gun. They're live rounds, but lack the HE or AP tips.

He suffered a mechanical problem after takeoff and was trying to get back to Andrews. When he realised he couldn't make it he aimed at the woods to try to avoid the houses.

posted on Apr, 5 2017 @ 11:53 PM
link
Very well trained to keep it cool to drop tanks before ejecting.Planes can be replaced,pilots cant.Glad hes safe.

posted on Oct, 26 2017 @ 02:33 PM
link
In probably the most unsurprising accident report ever, the cause of the crash was the result of improper assembly of the main engine control. The main engine control was missing a retaining ring and anti-rotation pin. This resulted in the MEC meter fuel flow incorrectly, resulting in overtemp, overspeed, fire, and failure.