page: 1
207
<<   2  3  4 >>
log in
join
share:
urssmorris
+91 more
posted on Apr, 4 2017 @ 12:17 PM
link
"After keeping his room locked for a month, Bruno Borges disappears and leaves it full of encrypted language and symbols all over the walls, along with 14 handwritten books (encrypted as well) and a statue of Giordano Bruno, italian Dominican philosopher worth approximately $2500 (R$7.000). The books were impecable in symmetry and aligning. His family didn't know about the statue, he was alone when it was delivered. It stands on a symbol that resembles Fullmetal Alchemist transmutation circle. He was constantly asking people to invest in a project he had without telling them what it was all about. He just told his mother he was writing 14 books that would change humanity in a good way. After getting $6500 (R$20.000) from his cousin, he was able to finish his project. He disappeared last monday, 27."


Dont sure if right section, maybe an abduction (see portrait in photo album)

I would love to see that cataloged and published!

It would be really interesting if the full work was available to study online.

whether or not it is something life changing remains to be seen.

thanks for the thread.

posted on Apr, 4 2017 @ 12:26 PM
link
Very interesting but we really need a translation of the video, if possible. The room looks too imaculate, almost as if it is staged but I really cannot comment except to say that hopefully more information will be forthcoming...or it will just vanish into obscurity.

Awesome thread. I can't wait for this story to develop more. Do you know what city he disappeared from? Great OP, now to research Giordano Bruno. Cheers

Interesting that the man who created this work is called Bruno...probably just a coincidence.

I'd never heard of Giordano Bruno so I googled him, and he was quite an interesting chap by all accounts:

OP, is this the only source material that is available? The video you posted?

Yes, it does. It appears clean, clear and precise from a distance but only close study would reveal if it is intelligibe or just a load of random scribbles. 10/10 for neatness, though.

posted on Apr, 4 2017 @ 12:30 PM
link
It all looks rather staged to me. Perhaps his disappearance is part of the project and he and his investor will reap the rewards of his own mythos.

JHumm
+2 more
posted on Apr, 4 2017 @ 12:31 PM
link
If it is anything that will change humanity for the better, I doubt we will ever see all of it, or not be told the truth about what it has to offer.

posted on Apr, 4 2017 @ 12:32 PM
link
I also googled Bruno Borges - seems there's an active developer going by the same name, not sure it's the same fellow, though. Lot of links to coding/development stuff.

More interesting I found a reddit page where this is being discussed:

According to this, there are various groups already working on figuring this out. Says Bruno went missing on or around the 27th of March.

originally posted by: subfab
a reply to: urssmorris

I actually wonder if that's all it is, the entire property looks like it's been turned into a walk in art installation.

I hope we hear the results of the translations.

There's a guy on reddit who identified 3 symbols & Metratron's cube.
That's intriguing, I want to see the books!


It's funny how this case is wrapped in some ridiculous coincidences. The guy is called Bruno, study hermeticism/alchemy, and bears a certain physical resemblance to Giordano Bruno.

I could bet that somehow, at some point of his diving into the occult, he started thinking he was an incarnation of Giordano himself.


Scrolling further down - someone links to a 4chan page which is perhaps more interesting, apparently the thread on 4chan is now locked yet it's only a few days old (dated the 29th of March).

originally posted by: Peeple
a reply to: HeathenJessie

Yeah, it's quite trippy.

The 4chan thread is pretty interesting, this thread is awesome.


The "alien" is standing behind him, and dressed the same as him, which probably means it represents his "higher self" or idealised form. You can also see the same symbols in their eyes: 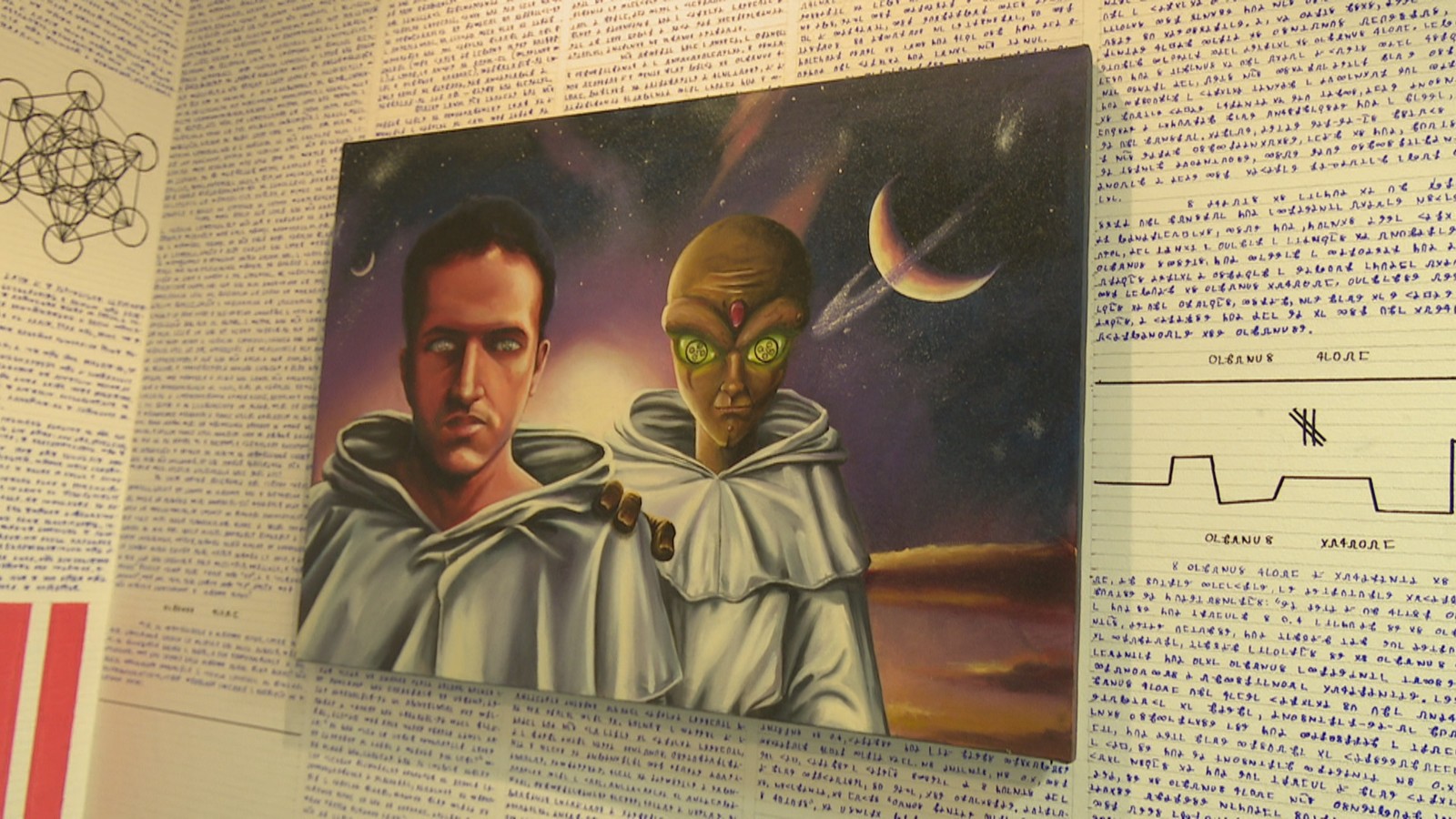 Beautiful art, at any rate.