The United Arab Emirates arranged a secret meeting in January between Blackwater founder Erik Prince and a Russian close to President Vladi­mir Putin as part of an apparent effort to establish a back-channel line of communication between Moscow and President-elect Donald Trump, according to U.S., European and Arab officials. The meeting took place around Jan. 11 — nine days before Trump’s inauguration — in the Seychelles islands in the Indian Ocean, officials said.

Though the full agenda remains unclear, the UAE agreed to broker the meeting in part to explore whether Russia could be persuaded to curtail its relationship with Iran, including in Syria, a Trump administration objective that would likely require major concessions to Moscow on U.S. sanctions.

More connections between Trump and the Russians, this time, with Erik Prince of Blackwater fame in the mix.

There are a lot of ties between Trump operatives, and this particular connection is also part of the FBI's ongoing investigation into possible collusion between the Trump Campaign and Russian government agents.

Prince was an avid supporter of Trump who gave $250,000 last year to support the GOP nominee’s campaign, records show. He has ties to people in Trump’s circle, including Stephen K. Bannon, now serving as the president’s chief strategist and senior counselor. Prince’s sister Betsy DeVos serves as education secretary in the Trump administration. And Prince was seen in the Trump transition offices in New York in December. U.S. officials said the FBI has been scrutinizing the Seychelles meeting as part of a broader probe of Russian interference in the 2016 U.S. election and alleged contacts between associates of Putin and Trump. The FBI declined to comment.

Who else was a part of the Trump transition team again? Oh yes, Devin Nunes, who just "happened" to be at a meeting with Mike Flynn and the Turkish Foreign Minister about this same time.

Interesting times we live in, no?

digital01anarchy
+7 more
posted on Apr, 3 2017 @ 03:57 PM
link
So if i get this article correct a brother of someone trump appointed as heading education in america met with an Iranian official to set up a russian connection backdoor. Ahahahahhahhahhhahahahhahahahhahhahahahhahhahahhahshhshahhs.
The spokesman said this story is a total fabrication lol not a no comment not that we are not taking questions at this time not my client is reviewing legal counsel but Its a total fabrication of the truth

posted on Apr, 3 2017 @ 04:05 PM
link
The MSM loyal to Obama is getting so desperate it's hilarious. Gryphon you mock every source that is unknown or classified but take this bs for face value. It's kinda ironic.

How'd you get that?

The UAE, which is no friend of Iran, set up a meeting between a Russian and Prince. So the article says, anyway.

I do find the flat out denial interesting, though, and find it odd that this particular meeting is being looked at in regards to interference in the election. The election was already done and dusted when the meeting happened.

Clinton took 100mil from the UAE


The Clintons and the Emirates
Secretary Clinton’s top aide was paid to negotiate a private deal.


This week the Washington Post reported that Cheryl Mills, who served as Hillary Clinton’s chief of staff at the State
Department, was simultaneously being paid by a private organization to negotiate with a foreign government.
www.wsj.com... 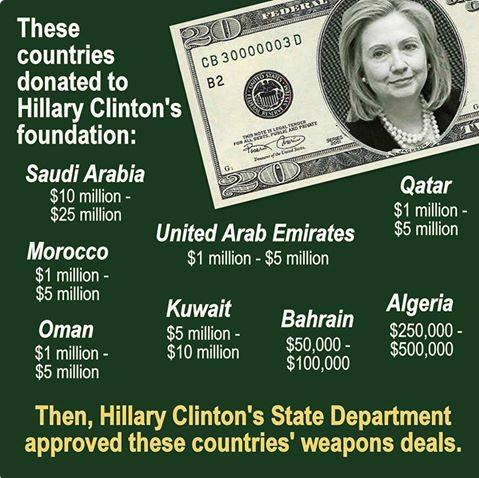 From what I read the focus is on the connections between Trump, his operatives, etc. and Russian interests. I think the connections to the Election are part of an ongoing investigation perhaps spanning years.

Another question though presents. Why would Trump need Prince if Flynn, Stone, Manafort et al were supposedly linked to Russia. Different factions? Redundancy?

Thanks for your input. It's not about me. This is not the Mud Pit.

News is news. Do what you like with the info.

Dude, when are you going to realize that this is all a hoax.

Though it remains to be unproven, so what if Trump had contact with Russia?

Clinton had a lot of confirmed contact with Russia and that includes discussion of policy after she won the election.

Your corrupt witch lost, America was fed up with the status quo. Stop trying to get us to go to war with Russia.

It's not about Clinton.

Because it's not a hoax. That's just an absurd statement at this point. As is trying to make this about Clinton or about war with Russia.

It's not about Clinton.

Because only Clinton can take money from Russia,
and the UAE without question?

I'll try politeness once more: this thread is about breaking news regarding Trump Russian ties.

It's not about Clinton. Please get on topic.

With Clinton you have confirmed, documented cases of discussions with Russian diplomats about policy (before the election), and you have a paper trail of money that leads to donations to her foundation and stocks in Russian oil owned by her campaign manager Podesta.

With Trump, you have allegation, speculation, and downright farcical facts.

If there was anything to this Russia/Trump collusion, it would have been addressed during the election. We would have some evidence.

posted on Apr, 3 2017 @ 04:19 PM
link
Why would they need a 'back door' meeting? The election was done and over. The transition team had every right to contact other governments in preparation for the incoming administration.

Thanks. Those are good questions, perhaps you should start a thread instead of desperately trying to derail this one!

I'll try politeness once more: this thread is about breaking news regarding Trump Russian ties.

It's not about Clinton. Please get on topic.

This is just bs sorry and there is no evidence for anything mentioned in the article. The author should be fired. Just another smear job for the gullible Anti-Trump crowd.
edit on 3-4-2017 by Perfectenemy because: (no reason given)

originally posted by: Gryphon66
a reply to: ColdWisdom

Thanks. Those are good questions, perhaps you should start a thread instead of desperately trying to derail this one!

Well, that's an excellent question to my mind,which I raised above.

The President-Elect was nine days from being President. No "back-channels" needed.

Why the secrecy? Why the "denials"?

My point was that all of these threads you are making are going to look really silly when the truth comes out and Trump is exonerated.

And these threads of yours will look even more silly in 2020 when he gets reelected.


I am sure that Prince and the people involved in the allegations are going to fly into the US to give their sworn statement.

I guess The Washington post that is the first to put the Russia/Trump links can not let their instigations died down.

They need to be investigated after all the owner have a lucrative deal with the CIA, I wonder how much secret data is been leaked to them and they are just making assumptions.

this thread is about breaking news regarding Trump Russian ties.

According to Unnamed "sources"

according to U.S., European and Arab officials.

Really, you trust unnamed Arab sources to report honestly
about the President of The United States?

I thought Europe was not involved, according to
the Democrat talking points?

Nothing more than hearsay.