Despite the raucous one sided battle going on all around, I couldn't hear a sound. Just a quite ringing filled my ears. I looked around, only to see dead or dying everywhere. Crimson waves relentlessly crashed on the beach as if they were making their own assault. Men who hadn't been shot were drowning from the weight of their soaked gear or clutching to the side of their boats. There were about 5 of us on the beach unharmed. It seemed as if complete and utter doom were to be our destiny. 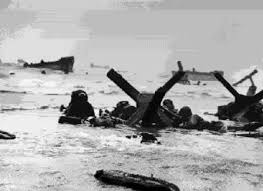 Looking to the sea, I could see the next wave in the distance headed toward our shared hell. I felt something shaking me and slowly turned my head to see another soldier screaming at me. Slowly the sound of his voice became audible as the sounds of machine gun fire and mortars filled the air.

"We need to move now!" He screamed.

Gathering the courage I had left, together we moved closer to the bluff. Using obstacles and artillery holes in the beach for cover we eventually made it out of machine gun view. Exhausted, we used the short respite to gather ourselves. No one spoke. We all just took in the scene. I wasn't completely sure that I hadn't died and was already in hell. The smell of death hung heavy in the air. 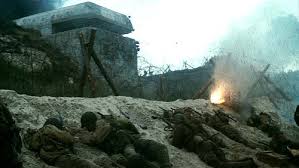 After a while a young private spoke up.

"Look" he pointed, "we can climb up there and flank around the bunkers."

We agreed and and our small group moved out. Knowing that we had to even the odds or the next wave would soon face our same fate. We climbed up the cliff one by one, chunks of dirt and clay hit my face and eyes as they fell off the boots of the man above me. Ignoring the stinging sensation I pushed further reaching the crest, a hand reached out and helped me the rest of the way up. 50 yards away was the first bunker. A smaller one, manned by 3 Germans. 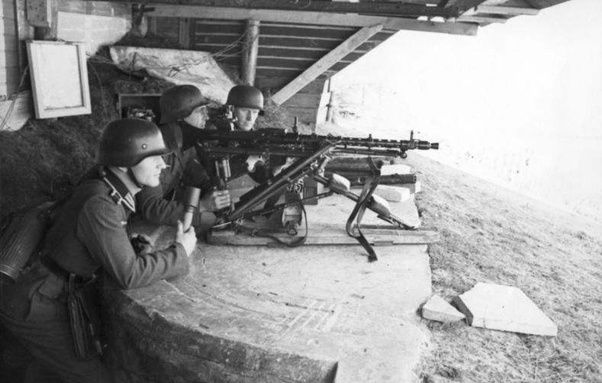 We crept closer and closer our sounds masked by the MG42 opening up on the approaching boats of the second wave. The young private and I both pulled out a frag grenade and and pulled our pins. We let them cook for a few seconds before we tossed them in and turned away from the coming blast. A brief second that felt like an eternity passed and then boom. The machine gun fell silent. We took cover behind the bunker wall and looked to the next target. A larger bunker lay just 100 yards ahead with German soldiers running into it through trenches carrying more ammo. 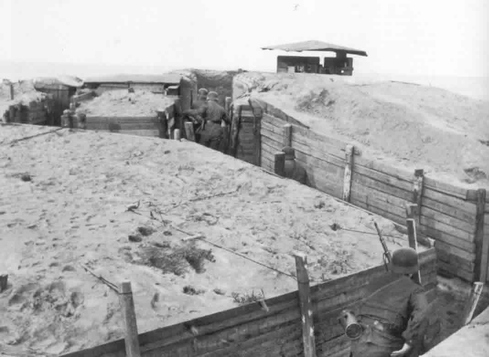 We waited for the last one to run inside and we made our move. Running quickly the short distance and dropping into the trench. Slowly walking down the trench, the machine guns opened up again. I could hear people shouting in German. As I rounded the first turn I came face to face with a young stone faced Nazi. He was as shocked as I was. For a brief moment we just stared at each other with wide eyes and open jaws. He dropped the ammo boxes he had in both hands and pulled out a long knife. A shimmer off of the knife edge snapped me back to the moment. As he lunged forward I swung the butt end of my rifle as hard as I could smashing it into his face. I could hear his bones crunch as he fell to the ground. My heart was beating twice as fast as before now.

So that's where that chip in the butt plate came from

I looked at my rifle, it now had more then a couple of the dings and scrapes that I had remembered. Quite a few were still missing however.

We continued on toward the concrete bunker. Slowly, we filed inside. Along the far side the Germans were lined up on the wall, focusing on the invaders down below. We took aim and started firing. The soldiers began to drop and their guns grew silent. As one soldier fell to the ground his eyes met mine. A sleight smile crept across his face just before his lifeless body hit the ground. A stick grenade released from his hand and hurled towards us.

"Oh #!" I dove forward toward the grenade, releasing the rifle from my hands. I watched it smack the concrete ledge and then tumble over the ledge toward the beach below. Just as I lost sight of it, I felt the ground beneath me slam into my body. There was a big lump at my belly. Before I could brace for the explosion I felt myself lift back off the ground.

Could I die in this dream, or reality, or wherever the hell I was?

I felt hands on my back, shaking me.

A female voice was yelling
"Honey, wake up. Honey!"

I opened my eyes and my hazy gaze realized I was back in my yard. Lying face down in the grass. My rifle was on the ground 20 feet ahead of me.

"Honey, are you OK?" It was my wife. She helped me up as I tried to gather my thoughts.

What the hell just happened"?

We walked inside arm in arm, my mind was still fuzzy. She helped me to the table as she went into the kitchen to grab a glass of water.
"You know you need to drink more water, I've told you a million times a man can't live off of sweet tea alone." I smiled knowing her love and care was matched by none. Also knowing that hydration wasn't the issue, I would let her think it was. How the hell could I explain what had happened? Would she even believe me?

I reached for my phone to call Bud. I tapped the numbers on the screen as fast as possible and held it to my ear. The phone kept ringing until eventually I got his voice mail. I anxiously waited for the beep, "Bud, what the hell kind of ammo did you give me? Call me back man."

I hung up the phone thinking about what to do next. The gun was telling me it's story and I knew what I had to do.

I had to take another shot.