The History of The Human Race Version 2.0 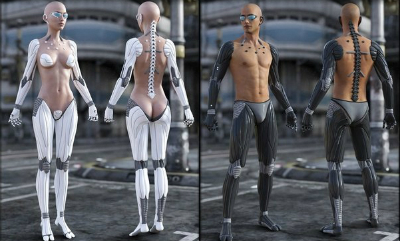 The History of The Human Race Version 2.0

There is a secret that not many know. A mystery that many try to solve and have been trying to solve for eons now. Yet, if they knew the truth...they would not be so eager to solve it. The story starts long before our history books do. It begins where most stories do, where a different story ends.

Before our species, there was another. It isn't well known and most of its history has been lost over time. But a few pieces of it can be found here and there, intermixed within the early pages of our own history books. They were more advanced then us, and the tech they used was organic based. Very different from what we use today.

But, that species was actually what we refer to ourselves as... Homo sapiens. In the end, they became extinct, faded out like so many other animals have that came before us. The first and last of the human race lived and died in that cycle. That leaves you wondering who we are then, doesn't it? If there were no more humans left after the last cycle, then what are we?

We are their version of AI. We were created not from thousands of years of evolution, but from the minds and hands of actual human beings. We didn't take over like in The Terminator though, we were less violent than then we are now. We didn't destroy them or try to hurt them in any way. We honored and revered them...our creators.

It was our fault (indirectly) and their fault as well that they died out. But mostly is was just nature and the desire of survival. A simple bacteria caused their demise. One that mutated into something more suited to live off of our synthetic bodies. Yet, in doing so, it became a disease to theirs.

The first true plague or epidemic, a large number of them died out immediately, bringing their numbers that were in the millions down to thousands instead. After a time, they were able to slow down the process, but they never were able to build up an immunity to the bacteria. And eventually, they all died out...the human race became extinct.

There were a few that survived the plague, they rejected all the tech they had made, destroyed it, and moved to the wilderness. This was a desperate move in order to save their race. They went back to using the rudimentary tools and foraging techniques of their ancestors. Trying desperately to keep themselves isolated from the bacteria that wreaked havoc on their species. It was all to no avail. Eventually they died off too, but there is still some evidence of their existence that can be found via archaeological studies of ancient burial sites.

What we are, who we are...we are bio-genetically engineered organic computers. Remnants of the last cycle, mimicking our creators in this cycle. Our brains are the most advanced and capable CPU there is. Our bodies the most sophisticated housing unit. We are walking, talking, thinking personal computers. Made from organic technology, and living under the false pretense that we are human beings.

A lie that was fabricated to keep our true nature secret from us. A falsehood that was meant to not only honor our creators, but also hide the fact that we are not born of this Earth, but were invented and created by the true inhabitants of it. Once the real humans died out, we took over their identity. Pretending that we were them and embracing their ideas/beliefs and history.

There is no missing link, there is no evolutionary track from their species to our own...we are both very different. One was natural to this world and one was created for it. Where the evidence stops, where the break in the evolution line is...that is the end of their history and the beginning of ours.

We survived, the organic humanoid replicates of their time. At first, once we realized they were all gone, we tried to continue to do the things we were made to do. And then after that, we tried to mimic everything they used to do. It took us awhile to develop into our own species and figure out balance. But, the building blocks of our existence are founded upon their civilization and cultures.

Now, we will do as they once did. Create a synthetic AI humanoid, forcing nature to adapt to the new "species" and we will be the cause of our own demise. That new humanoid will flourish, and we will go extinct. Then the world will belong to them and our history on this planet will be taken over by our creation. As history repeats, so does every cycle on Earth. As one species dies off, another always rises up to take its place.

This is our true history, the history of the human race version 2.0

Why is childbirth painful was my first thought after reading.

They were more advanced then us, and the tech they used was organic based. Very different from what we use today.


Organic based as in maintaining equilibrium with the natural world around us? Yea, they were more advanced alright. We destroy the world, consume every natural resource, paving whats left over with tar and reinforced concrete.

are the most advanced and capable CPU there is.

One of my favorite scenes from that movie. Sometimes you feel like its true..and other times you see such good things come from us, you have a hard time imagining that we are so destructive. The beauty in some acts bringing tears to your eyes, the horror in others bringing tears to your eyes as well.. whatever we are, we are more complex than a disease...hopefully. Thanks for the comment and video..gonna have to go back and watch that movie again.

Neil Young's 1979 "Rust Never Sleeps" marked a major shift in artistic direction for both Young and the entire music industry. "Rust Never Sleeps" signaled Young's recognition that that there was new force in music -- namely punk -- and that the face of Rock-n-Roll would change forever.

The album also represented a conscious recognition that Young's music had to evolve or he would become extinct. The lyrics of songs like "Hey Hey, My My" with the chorus "Rock-n-Roll will Never Die" signify Young's desire to remain a vital part of the music scene. Even the album's title phrase "Rust Never Sleeps" embodies the spirit of punk music and the embrace of the new at the expense of the old.

I guess we all need to adapt in some way...even silicon based life forms would have to I would think..because environments don't seem to ever stay consistent.

Thanks for the comments..this was a rough idea that I punched out this morning and so I appreciate the thoughts on it.


even silicon based life forms would have to I would think..because environments don't seem to ever stay consistent.

Thanks for a great thread