page: 1
29
<<   2  3  4 >>
log in
join
share:
windword
+12 more
posted on Apr, 1 2017 @ 09:24 AM
link
Something is very, very wrong with Pres Trump. At an Executive Order signing ceremony yesterday, Trump left and did not sign the orders. The media is saying that he stormed out without the signing the Executive Orders because he was being badgered by reporters, but that's not what the video actually shows. It looks to me like, thinking he was done he wandered off, intent on snubbing the press, and forgot he had 2 executive orders to sign!

Here's the clip everyone is talking about.

You can see his alarmed, shifty eyed advisors stunned and nervous, as VP Pence chases after Trump, trying to remind him of the whole signing business. Trump acts like "I meant to walk out without signing", and Pence grabs the Executive Orders and follows Trump out the door leaving the press core drop jaw over what they just witnessed.

But there's more! When Trump first took the podium his affect was all wrong. He haltingly struggled to read, placed emphasis on the wrong words and even the wrong syllABles at times, then he seemed to find his place again, gain momentum and ad lib. Mike Pence looked like a mother at his kid's play, worried he was going to forget his lines, trying to mentally transfer them to him. It was all he could NOT to mouth the words for Trump.

Now, here's the thing. The media has edited the worst of it out! But, you can still see some of the tell tale signs that Trump was in trouble. In my opinion, he was having a (mini) stroke. He was "stroking". I've seen it in my dad and my late husband.

In the above video, the media has cut out his introduction and the most "embarrassing" part of his speech. It starts mid sentence "I'm not beholding..." But there was a lot before that point that they don't want you to see!

Here's another set of clips, carefully edited, from the Washington Post. Sorry, I can't embed it.

It shows some of his halting speech, but you can see the awkward edits. I saw what they took out, but I can't find a cohesive full video of the so called ceremony any more.

Now, the White House said that Trump did later sign the 2 Executive Orders, but did he? Did he know what he was signing? I don't expect to see much of Trump this weekend. I think he needs some rest! I'm truly concerned for his health and the health of our country if he should be suddenly incapacitated. At least we know that, as President he has the best of the best doctors looking out for him, and probably not this guy. 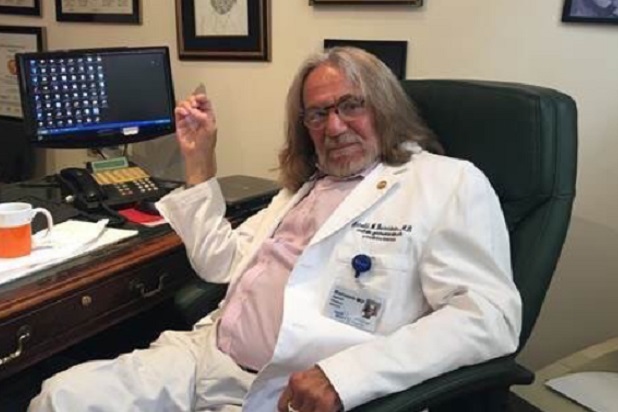 posted on Apr, 1 2017 @ 09:29 AM
link
About time for a place to shelter in for the attacks. You guys thought we looked weak with Obama and Hillary.

Wow, nice theory...pretty sure if there was any credence to it, it would be all over MSM. My theory is that he is so sick and tired of MSM reporters asking the asked and answered questions over and over and over, ad nauseam, that he thought it best to leave before he lost his temper...and continued the cycle of MSM asked and answered questions...yep, you guessed it...ad nauseam...

posted on Apr, 1 2017 @ 09:44 AM
link
His reading was odd too. He kept faltering getting words wrong. I thought he might have forgotten his contact lenses or something. It seemed like he couldn't see the teleprompter.

Mr Bush had his off days where he went strange many times in press conferences. Mr Reagan did that, too.

It is bound to happen when the stress levels are like that. Would you blame a guy if he took a shot of something in the drinks cabinet for some Dutch courage? Personally, in a job like that one, that turns your hair grey in just a few short years, I think my shots would turn into the kind Michael J liked having. I don't know how Trump has stayed sane with all that crap coming from the Liberal media. They are showing themselves for the hooligans they truly are as I see it.

I am not liking the Trump bullying. These people are showing their contempt for democracy. On that score The President has my sympathy. He doesn't deserve this hatred. All he really did was tell a few wisecracks that average American Joe could relate to.

posted on Apr, 1 2017 @ 09:47 AM
link
Funny, my theory is he's just a bit old and has a lot on his mind, and simply forgot. No big deal. He's is a human, I think. Funny also, I don't remember Trump answering too many questions lately. Haven't heard a lot from him in the last few weeks except for twitter, where he can't be asked a follow-up question or even an initial question. So I doubt he's to tired from answering MSM questions. He's probably tired from playing so much golf.

Wow, nice theory...pretty sure if there was any credence to it, it would be all over MSM. My theory is that he is so sick and tired of MSM reporters asking the asked and answered questions over and over and over, ad nauseam, that he thought it best to leave before he lost his temper...and continued the cycle of MSM asked and answered questions...yep, you guessed it...ad nauseam...

If you don´t like clowns, don´t go to the circus!
Maybe he just should look for another job then, if he don´t wants to ask questions?
I mean, asking question of the public is part of the job, isn´t it?
Ok, maybe not if you think you are the Godafther. Or Louis the Great, the Sun King...

Pres Bush won a battle, Pres Reagan tore down the wall and survived an attempted murder. What has Trump done except sign EO's because he had divided the nation. Hello, Pres Pence, which was the ultimate goal.

Funny, my theory is he's just a bit old and has a lot on his mind, and simply forgot.

originally posted by: MOMof3
a reply to: Revolution9

Pres Bush won a battle, Pres Reagan tore down the wall and survived an attempted murder. What has Trump done except sign EO's because he had divided the nation. Hello, Pres Pence, which was the ultimate goal.


I can't really comment on that. It is not my business. I can comment on seeing a man under an enormous amount of extreme pressure from media who are trying to sabotage a democratic decision that America made. I don't like to see that. I have never seen hatred like this without first giving a man a chance. I believe it is being deliberately stirred up internationally by big business men like Blair, Branson, Soros and the others. They don't like him. They are loaded with cash and can afford to attack him all around the world. I believe they are using the media as a weapon in many ways. I don't mean illegally; they buy their influence and have their media networking contacts like editors of newspapers and other MSM.

Watch out, your President might just get "taken out" in a new kind of assassination; one of character by media and social network execution, funded by a clique (Cartel?) of Liberal businessmen who don't like what the public has decided because they lose money, power and influence by it.

Then again, can anyone blame them. It is nothing that the Right didn't do before as we know with Rupert Murdoch. Unusually, even Murdoch isn't too keen. His new wife has converted him to Tory-light notions of liberalism (the very worst kind of liberal, lol).
edit on 1-4-2017 by Revolution9 because: (no reason given)

Of course, from many of you those were just the cute little mistakes people make when under pressure, not sure signs that they were spiraling down into mental decline.

boy, if he had a stroke and was either dead or incapacitated, you and your gang would win biggly!
Just look at all the compassionate replies. Truly the party of love.

Maybe he is having a health problem but it doesn't have to be anything other than a little bug and it can make a person like that.

I think he did an all right job with this speech, I have seen Bush do a lot worse a few times. Everyone has a bad day. People are making way too much of this, the reporters question he yelled out was stupid, he has already stated the answer to that question. The reporter was trying to bait him. Screw him.

kwakakev
+2 more
posted on Apr, 1 2017 @ 10:06 AM
link
Looks like Trump is just keeping it real to me. All this fan fare with commemorative pens and the big show is bogging things down when he has other things he could be doing.

With questions from the press having nothing to do with what the executive orders where about, good on him walking out. For the reporter to actually think that was the right time and place to get answers on flynn is out of place. I expect the whole vibe of the house would be uncomfortable with the dysfunctional media these days.

As for Trump being sick and having issues, I don't know. The CIA will get some heat if Trump does go down.

How do you think he will hold up under 11 hours of questioning as this investigation progresses?

I feel sorry that an old man was lied to by his doctor and family that he could take the stress. Otherwise, he is a politician who lied he way into the job. Consequences suck, like alcoholics getting liver disease.

"you're going to see some strong results very very quickly. it's going to be very very good. have a very good day."

he can't say the word once, it's gotta be multiple times. LOL drives me crazy!

I saw that yesterday too. Kind of weird the media is editing out the really unflattering parts. Hmmm....

One thing I will say I have noticed about President Trump is that he is sensitive. You can tell that. That's not a bad thing. I think they know he is and try and hit him in his weak spot and dent his pride all the time.

I really don't think he is the worst you've had. They are not going to give him a moment's peace. He will have to keep fighting all the way. He needs good people around him who can keep him going in the ring.

I have been put off the liberals big time watching what has happened. I never dreamed it would end up so vile. I was that way because I wanted a better world, not a load of thug minorities treading on the rights of the majority and sabotaging our freedom the way they have attempted. Now that really is an enemy to be concerned about.