AMPLE’s style is also evident in the Discovery Channel series Cooper’s Treasure, premiering April 18th at 10 PM Eastern (9 PM Central). Cooper’s Treasure takes viewers on an out-of-this-world search for a long lost “treasure map from space” created in secret by famed Mercury astronaut Gordon Cooper. The map contains information on the buried whereabouts of various ships in the South Caribbean. Decades later, Cooper’s close friend/explorer Darrell Miklos attempts to find what treasures may lurk amid the wreckage of those ships.


buried whereabouts of various ships in the South Caribbean.

I guess that info is..."burried" wide open on the internet... 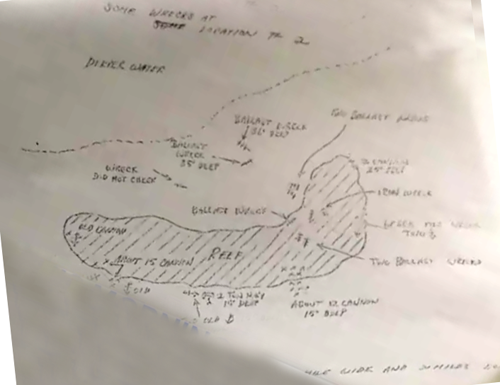 Cooper probably did tell those stories, and they seem typical of the fantasies he descended into, in his final years. Cooper got involved in all sorts of weird projects once he didn't get the moon flight he expected as his right,. and was eased out of NASA - but still enjoyed TV gigs. He became spokesman for a company selling magic engines that turned air into fuel [until it was shut down by the Federal Trade Commission]. He claimed he saved the shuttle program from a lethal design flaw by relaying a telepathic warning from space aliens. He naively flacked for several bogus aviation investment schemes that cost his friends and others who trusted him millions of dollars -- and lost his own savings in them, too. He described his capsule getting hammered by a meteor storm that nobody back on Earth found even a scratch from -- and he claimed to have taken photos from space on which you could read license plates. He packed a travel bag and his camera when he was promised a space ride on an alien craft, but then claimed it was cancelled because of an extraterrestrial political spat.

My advice: Remember him and honor his glory days, don't exploit his human failings in his declining years -- as this show gives all indications it intends to do. Shameful.


How about we call him a God damned liar.

Cooper’s Treasure – My debunking of the ‘secret sensor’ and ‘five thousand photos’ --
www.thespacereview.com...

Nope. And no fist-fights.

In perspective, the stories that Gordon Cooper told Darrell Miklos about his space treasure map (see “The magic MacGuffin of Mercury 9”, The Space Review, April 24, 2017) are fully consistent with other stories he came up with in his later years to entertain people. Moreover, he apparently believed them himself and spent a lot of time researching them.