Why didnt the FBI post any pics of the Pentagon prior to its collapse?

posted on Mar, 31 2017 @ 07:12 AM
link
I looked thru all of the pics and as far as I can tell, there are no clear images of the Pentagon after the impact but prior to its collapse.

Anyone else think thats a bit strange or coincidental?

Or are they hoping that people will forget that there was barely any damage?

For anyone who doesnt recall, according to photographer Daryl Donley, there was an explosion a few minutes after the initial impact: 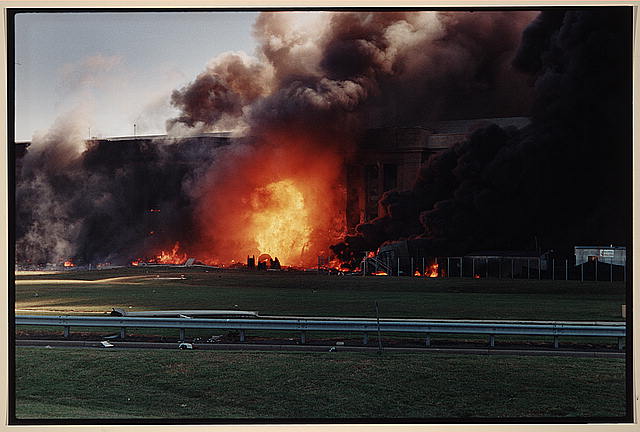 In the spirit of the newly released pics, here are a few more pics (that they didnt release): 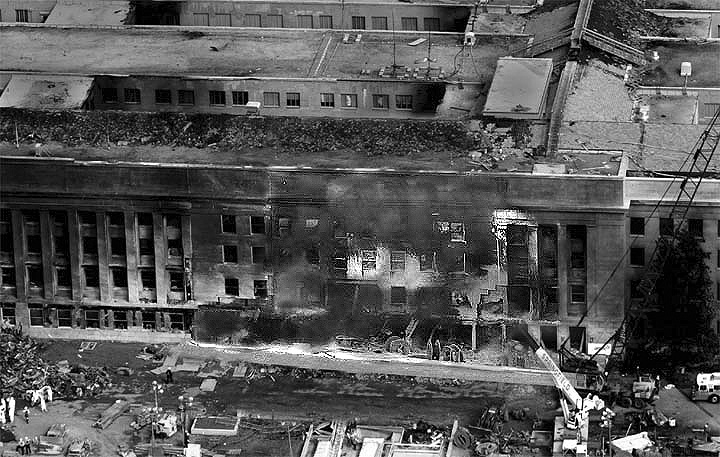 Theres plenty of pics 'out there', including the reason for that secondary explosion, equipment outside the walls of the pentagon.

images prior to and after collapse

(A firefighter implied that aviation fuel wasn't the sole source of the fire but SOMETHING THAT ONLY FOAM WOULD EXTINGUISH..)

Firefighter Russell Dodge said. "There were two vehicles burning, along with a construction trailer - we didn't know at the time, but that trailer was the main producer of smoke on the outside of the building - and the foam truck. "Once I had [the outside fires] pretty much knocked down, then I went into the area of the first floor where all the fire was, and just trying to get on that," he said. "It was something to fight with, until we got the other foam trucks there." He said the foam units got there and concentrated on the area of the construction trailer, which was producing some severe fires and subsequent mini explosions due to highly flammable chemicals in it, then on the actual point of impact from the hijacked aircraft.

Zoomable image of burning truck
edit on 31-3-2017 by intrptr because: additional

I'm sure they took pictures of the building prior to its collapse.

I'm speculating as to the reasons why they didnt release them.

Youre right, there are pictures out there showing the building prior to its collapse but only if someone is looking for them.


Most of the imagery of that day was taken by bystanders and media. The FBI would just be re releasing images already in the public eye. I kinda doubt they were there early 'takin pictures' like some tourist. They were probably very busy at the time elsewhere (like New York).


Ummm...is the third image in your OP a cropped image...?

I'm wondering what the five circular things in the foreground that look like cable reels are...and if there is imagery that shows more of the foreground at the time the photo in question was taken...


I'm wondering what the five circular things in the foreground that look like cable reels are.

Pictures were taken by media and people at scene

posted on Mar, 31 2017 @ 09:04 AM
link
Dang look at that massive tail section and engines lying about.
I almost missed the plane because of all the seats and luggage debris.
Are the ads at the top of the page also sponsored by the Pentagon ?
because they are RELENTLESS
edit on 31-3-2017 by UnderKingsPeak because: Ad blocks all
edit on 31-3-2017 by UnderKingsPeak because: ?

I also wonder why we only get some crappy video of the "event". The pentagon had plenty of cameras, and possibly satellite coverage.
edit on 31-3-2017 by seasonal because: (no reason given)


In the spirit of the newly released pics, here are a few more pics (that they didnt release):

Well, that is the thing, is it not - they already were released, so why include them?

(Come to think of it, I just assume that FBI's release is of previously unreleased photos, but I do not actually know. Is it?)