They did exit out the other side. There are several videos taken of the second impact that clearly show the fireball and debris coming out the building, and several large pieces of debris found on the opposite side from the impact.

Flight 77 did the same thing. It exploded on impact and debris caused the exit holes on the far side.


Debris caused the round holes on the far side of the second section? What kind of debris? How did the jet fuel not cause the same, or even remotely close, conditions that it did with WTC1 and WTC2? How did the debris not cause similar conditions like at WTC7, which was hit with debris?

You may want to see the video, but, you do not have a right to it...pending a judge's ruling of course. But, it does not matter, every relevant video is public domain now.


EDIT...well apparently something is going on with ATS and YouTube. But, go to YouTube look for user cjnewson88 you will find plenty of the "FBI confiscated" videos.

The planes and fire. Building 7 had almost one entire side ripped open by falling debris, and no water to fight the fires because of the collapse of 1 and 2.

Most likely the nose landing gear and pieces of the forward avionics bay.

Because the Pentagon was made out of completely different materials that have totally different properties in heat.

Building 7 was damaged and the fire started because of debris falling from the top of building 1. What conditions even remotely similar existed at the Pentagon?

It was damaged by the collapse, yes.

You may want to see the video, but, you do not have a right to it...pending a judge's ruling of course. But, it does not matter, every relevant video is public domain now.


Neat-o. If they don't want to show the evidence, then they haven't proven their case. I am ok with that. I've already decided the federal government is likely lying and hiding evidence.

So, just get over it. There's too much reasonable doubt about the OS -- no one should be expected to believe the a**hole, lying, criminal federal government. There are many other plausible alternative theories. Have they been proven? No, but the burden of proof is not on Truthers presenting alternative theories. It 's on those pushing the official story.

If you don't think the American public deserves to see conclusive evidence, then quit your whining about our reasonable doubts about the OS.

It's as simple as that.

Prove your case beyond a reasonable doubt or STFU about it.

How is that I can actually watch videos of WTC7 collapsing into itself and not see WTC1 collapsing into it?
Can you provide the videos that back up your claim?
edit on 1-4-2017 by M4ngo because: (no reason given) 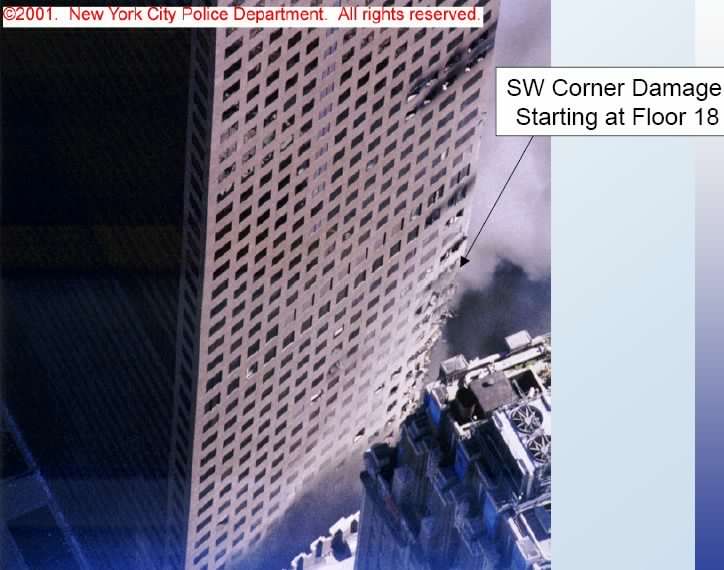 That looks like a significant amount of damage to me.

It was damaged by the collapse, yes.

Because it was debris from WTC 1 not the entire building. There was debris going everywhere that day and not every piece was caught on video until it landed.

And it collapsed around the impact area too. Add in the fire that burned out of control for hours to the major damage, and WTC 7 was going to collapse.

Because it was debris from WTC 1 not the entire building. There was debris going everywhere that day and not every piece was caught on video until it landed.

What source do you use to come to this conclusion about WTC7?

Did you bother to actually read about any of this? WTC 7 had over 40,000 gallons of diesel fuel in five tanks inside it.

WTC 1, 2, and 7 collapsed from severe structural damage and fire. Why is it that folks that believe in the conspiracy theories always forget that......


LOL I see that your Forgetting
that The World Trade center 1 n 2 were Designed to Hold up after a Airliner 707 hit it !

How would I know ? hmm

Beacuse I Know Personaly some of the Iron Workers that Built Them !

if you need a visual

Nothing else got near WTC 7. It suffered major damage. It was intact before the collapse. WTC 1 threw debris all over the area around it.

So what's your reason for the damage to building 7?

A 707 trying to land lost in fog is a different impact than a 767 at high speed.

• In the NIST 2004 preliminary report, NIST suspected that debris from WTC1 (North tower) resulted in the 10-story destruction area at the WTC 7's south face. This was the reasoning of cause behind the building's collapse initially, according to NIST's 2004 preliminary.

• In the NIST 2008 final report, NIST suspects that, actually, it was office fires that caused the collapse of WTC7—a high-rise, steel frame building.

They didn't mention anything about the resulting fires in those videos.

The towers did not fall from the impacts alone.