originally posted by: rickymouse
We have a disfunctional government. I don't think Washington should have authority over our military. It's been that way for at least twelve years.

One of my dad's biggest gripes about the Vietnam War was politicians trying to run it from Washington and not letting the commanders in the field do what they know and do best. He considered it political theater with the lives of our troops used as political props.

And today, I've lost all hope for Trump to be any different.

posted on Apr, 8 2017 @ 10:17 AM
link
Well -- surprise! surprise! -- not much at all about Russiagate/Spygate since the missile strike in Syria. When it comes back on the radar, I'll post anything of interest I find again...

Dem Intel Committee member Adam Schiff: We now have more than circumstantial evidence of collusion between Russia and Trump staffers

That was March 22...before he knew what Nunes knew and Susan Rice was exposed... This is April 2:

Adam Schiff: There Is No "Definitive" Proof Of Any Trump-Russia Connection

What does lack of proof prove?

originally posted by: spiritualzombie
a reply to: Boadicea

What does lack of proof prove?

The FBI and the Justice Department obtained the warrant targeting Carter Page’s communications after convincing a Foreign Intelligence Surveillance Court judge that there was probable cause to believe Page was acting as an agent of a foreign power, in this case Russia, according to the officials.

So unnamed "law enforcement and other U.S. officials" -- again. And, if true, more leaks of classified info. But still no evidence (much less proof) of any collusion with Russia. (ETA: But definite proof of spying on Trump)

And if true, of course every conversation with Trump and other campaign officials during the campaign would have been "incidentally" collected by his political enemies.

But they didn't feel the need to likewise surveil Hillary or her campaign manager -- Podesta --with all of their associations with Russia?

Or maybe they did. I guess we really don't know. And that would be some powerful blackmail material...
edit on 11-4-2017 by Boadicea because: (no reason given)

posted on Apr, 15 2017 @ 08:21 PM
link
I just heard Webster Tarpley talking about this on his World Crisis Radio program. He was joking that it might be the origin of Trump's antipathy to NATO, i.e., that NATO is actually effective at detecting Russian (and his own) mischief.

Britain’s spy agencies played a crucial role in alerting their counterparts in Washington to contacts between members of Donald Trump’s campaign team and Russian intelligence operatives, the Guardian has been told.

GCHQ first became aware in late 2015 of suspicious “interactions” between figures connected to Trump and known or suspected Russian agents, a source close to UK intelligence said. This intelligence was passed to the US as part of a routine exchange of information, they added. 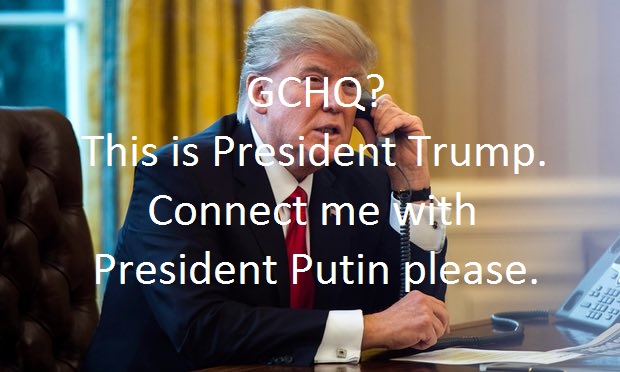 I just heard Webster Tarpley talking about this on his World Crisis Radio program. He was joking that it might be the origin of Trump's antipathy to NATO, i.e., that NATO is actually effective at detecting Russian (and his own) mischief.

That wouldn't surprise me... but at this point, nothing would surprise me!!!

Putting on my bestest tin foil hat, it occurs to me that this could have something to do with the NATO nations ponying up some more bucks, and with Trump's about-face regarding NATO. I doubt other nations want their people to know about their spying either... could have been quite the bargaining chip for Trump once he took office.

Thanks for sharing the link -- and the pic (love it!).


The FBI last year used a dossier of allegations of Russian ties to Donald Trump's campaign as part of the justification to win approval to secretly monitor a Trump associate, according to US officials briefed on the investigation.

The dossier has also been cited by FBI Director James Comey in some of his briefings to members of Congress in recent weeks, as one of the sources of information the bureau has used to bolster its investigation, according to US officials briefed on the probe.

That dossier was a joke... not even a joke. It read like nothing more than a compilation of rumors and gossip from over-active imaginations... at best! And that's the takeaway here: The PTB can pretty much make up whatever they want out of whole cloth and then use that to "justify" spying and pretty much whatever else they want. Probable cause be damned!

Every Day Is A Maze Of Mixed Reports On Crucial Issues Of Importance To Americans.


The Senate judiciary committee announced Wednesday that it has scheduled a hearing for May 3 with testimony from FBI Director James Comey.

The hearing was announced for FBI oversight purposes, and is not necessarily related to congressional investigations into alleged Russian involvement in the 2016 presidential election.


The judiciary committee’s Subcommittee on Crime and Terrorism announced earlier this week it had scheduled former acting-Attorney General Sally Yates and former Director of National Intelligence James Clapper to testify at a May 8 hearing as part of that committee’s investigation into the Russia matter.

The so call dossier was made to order by some shady firm working for the Hillary campaign and with the backing of some Republicans that didn't want Trump to win the elections to smear Trump.

Now the fall guy that will get all the blame for the Russian affair seems to be pointing to one particular person the problem is that he was working for Obama when he took money for his services, yes we all know who he is.

Until this day the links between Trump and Russia can not be established, but somebody needs to justified the waste of tax dollars on the witch hunt

Now that the hearings are gearing up again, hopefully all this will come out in testimony. I'm sure curious to know what's been going on behind the scenes the last few weeks. I don't like this delay. Too much time for dirty tricks.

The delay is because those on the witch hunt can not get what they want, because is not there, they don't want anybody else but a direct link of Trump to Russia and that is not happening.

That is how I see it.

The delay is because those on the witch hunt can not get what they want, because is not there, they don't want anybody else but a direct link of Trump to Russia and that is not happening.

Including those "Never Trump" Republicans involved in the spying -- and thank you for including them before! I agree. There's dirty hands on both sides of the aisle here.

posted on Apr, 28 2017 @ 08:20 AM
link
They're going to find out that there have been ties to Russia for many prior administrations. This seams like a smoke screen to keep the heat off of Hillary's deal with the Russians acquiring uranium one. Also, on the Flynn scandal , his background security check was done by the Obama administration.

posted on Apr, 28 2017 @ 03:46 PM
link
Russia is in Syria to prolong the war indefinitely to the benefit of Israel. Trump, Putin, Netanyahu. They are all conspiring together to butcher Syrians.
edit on 28-4-2017 by allsee4eye because: (no reason given)

posted on May, 2 2017 @ 09:18 AM
link
Senator Points To ‘Material Inconsistencies’ In Comey’s Statements On Trump Dossier


“There appear to be material inconsistencies between the description of the FBI’s relationship with Mr. Steele that you did provide in your briefing and information contained in Justice Department documents made available to the Committee only after the briefing,” Grassley wrote to Comey.


Grassley has expressed concern about those discussions because Steele was working on behalf of an opposition research firm (Fusion GPS) that was, in turn, working for an ally of Hillary Clinton’s.

“The idea that the FBI and associates of the Clinton campaign would pay Mr. Steele to investigate the Republican nominee for President in the run-up to the election raises further questions about the FBI’s independence from politics, as well as the Obama administration’s use of law enforcement and intelligence agencies for political ends,” Grassley wrote in a March 6 letter to Comey.


Attempts to find out from Grassley’s staff about what Comey said in that briefing that was inconsistent with Justice Department documents were unsuccessful.

Comey: Thousands of Clinton Emails, Including Classified Ones, Were Forwarded to Anthony Weiner

The Final Truth about the “Trump Dossier”

The Final Truth about the “Trump Dossier,” Part Two