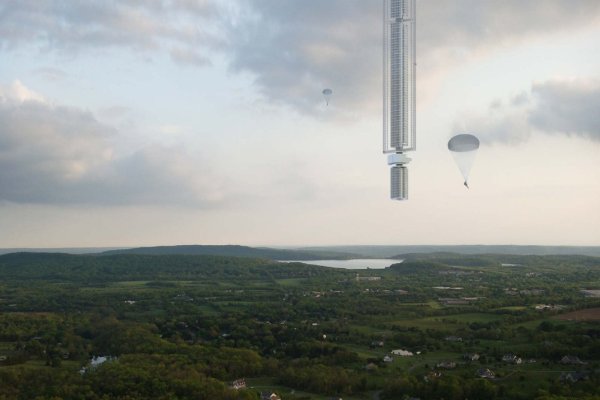 I doubt this idea will come to fruition anytime soon, if at all, but the idea is truly fascinating. A New York based firm is seriously considering hanging a skyscraper from an asteroid, it will also be the tallest skyscraper in the world. At a quick glance this seems completely ludicrous and insane, but not only do they believe it can be done, but will be the future of our cities. The skyscraper will be suspended from an asteroid in orbit and will make a daily round trip across the world. Pretty cool to ponder. Maybe call it a Groundscraper?

Travel around the world from your room? Yes please

Over the course of each day, the floating skyscraper would trace a figure-eight path over our planet's surface, according to plans posted online by Clouds Architecture Office. It would swing between the northern and southern hemispheres, returning to the same point once every 24 hours.


Obviously this isn't for your regular Joe, I would assume only the super rich would be able to afford this. Probably helps to be an avid skydiver as well.

Analemma would be powered by solar panels and use recycled water. Lower floors would be set aside for business use, while sleeping quarters would be sited about two-thirds of the way up. The plans don't say exactly how people would get on and off the building, though one illustration seem to show people parachuting from the tower to the ground.

Anyone venturing to Analemma's highest reaches would be treated to extra daylight — about 45 minutes more at an elevation of 32,000 meters, according to the plans. Of course, tenants who ventured that high would need a spacesuit to go outside because of the near-vacuum and temperatures estimated to be about minus 40 Celsius.

"Harnessing the power of planetary design thinking, it taps into the desire for extreme height, seclusion and constant mobility. If the recent boom in residential towers proves that sales price per square foot rises with floor elevation, then Analemma Tower will command record prices, justifying its high cost of construction."

In an email to NBC News MACH, Carlo Ratti, director of MIT's Senseable City Lab and an architect noted for futuristic thinking, called the tower a "fun utopian mega-project" but said a cable suspended from space would break under its own weight.

And beyond feasibility, Ratti expressed philosophical doubts about the very idea a suspended skyscraper.

"I am not sure I would like to live in such a self-referential building, literally detached from the rest of the world," he said in the email. "Cities are built to bring humans together, while a building such as the Analemma tower would do the opposite."

So is this the city of our future, or is it way too ambitious?

Firm Floats Plan to Hang Colossal Skyscraper From an Asteroid

And I plan to fly to the moon in my pyjamas but that doesn't mean it's going to happen.

Thanks for the revelation.

This is easily the most unworkable dross I have EVER laid eyes on.

The skies are too busy with aircraft to make this viable, the birds and insects would be absolutely buggered by this thing, and what is more, the possibility of it failing and part of it dropping onto cities below is FAR too great to even test its feasibility.

So this would be a man-made satellite of a sort, with a "skyscraper" protruding from it?

I wonder how it would stay in orbit, or it does it do a "figure-8 path" around the globe each day.

Did they mean something else when they said "asteroid"? What am I missing

I think this idea was built on the premise of NASA's plan to "rendezvous" with asteroids. So from what I understand, It will be hanging from an asteroid orbitting Earth. I know, pretty 'outlandish'. Literally.

Supposedly it is attached to an asteroid orbiting the earth 30,000 miles up. This asteroid supposedly makes one orbit per day. If whatever is hanging from the asteroid is in the atmosphere, it will be ripping along at about 1,000 miles per hour. How about those winds?

Ummmm, what? Suspend it from cables from an asteroid in geosynchronous orbit? That happens about 22,000 miles above Earth, so they want a cable that basically could wrap around Earth.

I can only assume (and hope) they would plan to have it sit outside of Earth's atmosphere. Imagine if this thing hit a storm system.

It seems to me to be more of "they did a mental exercise to take a serious look at what it would take to do this".

Supposedly it is attached to an asteroid orbiting the earth 30,000 miles up. This asteroid supposedly makes one orbit per day. If whatever is hanging from the asteroid is in the atmosphere, it will be ripping along at about 1,000 miles per hour. How about those winds?

Your body is ripping along at 1000 mph as the Earth rotates. This thing would hypothetically orbit at the same speed as the Earth and the atmosphere...

Even though this story inspires some cool visuals, it's not even close to feasible, As they say Right there in the story. However as far as CGI in a movie I think that would be a must see.

posted on Mar, 30 2017 @ 01:41 PM
link
This thread reminds me about a guest exploring space elevators on CoasttoCoastam a few years back:
www.coasttocoastam.com...

The idea of designing structures like this is quite fantastic, and would push the limits of engineering in a new direction.While remaining skeptical, listening to William Forstchen explore this kind of thing really made some good points.His take didn't involve using an asteroid, but perhaps down the road combining a space elevator and tower together would give mankind something other then war to distract ourselves....

originally posted by: dffrntkndfnml
...but perhaps down the road combining a space elevator and tower together would give mankind something other then war to distract ourselves....


Call me cynical, but we'll just go to war over access rights to the space elevator.

When the small print says "Warning: side effects may include an extinction event" I think it's time to go back to the drawing board.
edit on 30-3-2017 by GetHyped because: (no reason given)

The asteroid isn't in Geo Orbit, its a little bit higher ...... that means it isn't in sync, that means the MF tower block will be travelling at 1000mph above the surface of the planet, that means there is no chance of it working.

Do the research and the math

Mr. Forstchen brought that up too.He was taking the angle that if the US could get behind a project like that the benefits would outweigh the risks.In his opinion, the price involved in realizing structures like this would pay for itself.The exponential price drop of ferrying materials into and out of orbit would give whoever makes this a tremendous technological and financial advantage.For purely real estate purposes a space tower doesn't appear to warrant the effort.Combining an elevator and tower however, could revolutionize our efforts in space.

The guy is a dreamer, no doubt.He was putting the idea out there to help give Americans a megaproject to inspire generations, similar to the US space race.Idk, maybe using chemical fuels and shooting for Mars is more practical, lol...

was going to say that... and even if it would work, that thing would bring massive destruction(winds) and terror(noise) to anything in it´s path. everytime.