Spiders could theoretically eat every human on Earth in one year

I have no problem with the spiders. Humans is what I'm worried about. F*cking savages.

There are more insects on this planet than humans. They hitch rides all over the place. A little old lady got bit late last night... at the Home Depot by a brown recluse (those are the lyrics to Werewolves of London, another flop, *sigh*). And actually, it was last year. It flew in an airplane in packaging from the warehouse (they guessed), because that spider is not native up here in tundra region.

On the "Stoned spiders," when tripping on T&C-25 they make perfectly symmetrical webs! I find that factoid rather interesting.

Eat food or be food. Never has the law of the jungle been made more poignant.

S+F and for the creepy crawly feeling alone!

posted on Mar, 30 2017 @ 08:54 PM
link
Spiders have become very successful, using a sac
or web bundle to nurture hundreds of spiderlets
or tiny spiders, who hatch flying on the wind on
their filament of web but they aren't an insect.

All insects have a hard exoskeleton, and wings,
a spider usually has a soft body. There are so
many more insect biomass than any other life
on Earth many times over. There are a lot of
spiders, but their biomass probably exceeds all
other life except for insects.

I used to torture Daddy Long Legs at times since it
is so harmless but what does a child know.

nothing to be afraid of. Most spiders dotn even think they just react to instincts. Climb to a high spot, make a web and eat what it catches.

there are spiders that do think ahead and outsmart there prey and tend to eat other spiders. And the others are rare to come by depending what country your in.

you et some spiders that make huges webs on the floor and if any prey come thousands of spiders come out and destroy them. Its when they work I n team its very deadly. But that's in the congo or something silly like that.

I heard that if ants where a couple of inches bigger then could take over the world.

Yeah. Humans are really naive. The insects and arachnids are truly the world's masters. There is apparently an ant colony the size of a continent and may even stretch across oceans.


Argentine ants living in vast numbers across Europe, the US and Japan belong to the same inter-related colony, and will refuse to fight one another.

The colony may be the largest of its type ever known for any insect species, and could rival humans in the scale of its world domination.

What's more, people are unwittingly helping the mega-colony stick together.

Argentine ants (Linepithema humile) were once native to South America. But people have unintentionally introduced the ants to all continents except Antarctica.

originally posted by: JAY1980
Easy solution to this!
Introduce the spider society to the drug culture!

originally posted by: Irishhaf
Before I moved I had a jumping spider that hung out under my computer desk, every time I played music he would come out and kind of bounce up and down to the vibrations right next to my speakers.


Same here! Except for the cats.

They are the only ones I can stand having around. Cute little buggers.

I've had a couple epic battles with some very large spiders here. Huntsman and they lose. 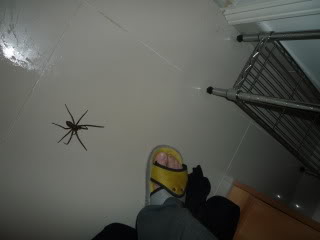 that is awesome, scary thought also. if only humans can live side by side without fighting.

I think spiders are great, they are essential in the food chain and are a boon to mankind. I have no problem with spiders...AS LONG AS THEY STAY OUTSIDE, WHERE THEY BELONG.

There were widows in my old house, nearly put my face into one as it descended on a web (which I had NEVER seen before...usually they are just crouching in the middle of the web, plotting my demise). But I found a fabulous pest control company, which uses chrysanthemum-based, non-toxic stuff which is safe for humans and kitties. Saw one, maybe two spiders (one dead, one nearly dead) in four years. If there are any in my condo now, they stay well away from me! (So, apparently, they are very intelligent creatures!)

BTW, there's basically only one way to dispatch a black widow. With a large shovel!