190 degrees to port is between two cardinal points, aft (back and to the left) visually referencing orientation to the ship and often the ships forward movement if present and not compass points rather geometrically aligned to the ship itself.

I am not referencing current day naval vessels, but if the "big eyes" were directed toward the object in question for ship orientation and observation, a big brass ring under the binoculars, coordinated to the centerline astern, would physically show the degrees. 190 degrees is not incorrect if one lost all compass and airiel warmings etc. and using only the ships orientation, spotting using only manual methods.

As another poster noted and is fact, the ship, if lost control from any major systems malfunctions to the conn; can and would be controlled and corrected by the EO directly; immediately in a crisis.

Here's further UFO testimony involving the USS John F Kennedy where the commanding officer actually appeared via the onboard video system screens throughout the ship and ordered crewmen 'do not discuss'.


There are also claims that this Naval Command Centre received a "spanking new log book' after a very strange UFO initiated a Condition Zebra Alert:

There has to be something going on that is not from this planet unless this planet caused its own self.

posted on Sep, 19 2018 @ 06:12 PM
link
A couple of things. The steering was all mechanical end to end. Wheel turns the rudder turns. Diesel engines just don't die. Nothing electrical needed to make those old engines run.

Linkey to USO's and such

originally posted by: mikell
Some reading

Linkey to USO's and such

Hola Mikell that paper was linked in the opening post (and very interesting it is to) but certainly appreciate the addition anyway mate.

When it comes to UFO/USO Naval log book shenanigans it looks like there may be yet another example below involving astronomer Marc D"Antonio and a submarine sonar operator tracking an underwater object travelling at several hundred knots - the order then came down from the commanding officer to "Log it and dog it".

posted on Dec, 24 2018 @ 10:22 AM
link
Yet another 'shiny new log book' report - this one from 1949 involving the radar confirmation of a very large, very fast unidentified flying object over the English channel and the UK’s Fighter Command and Bomber Command:

..Then something curious happened, as Oliver noted: “At our usual relief time, ‘B’ Watch stood down and went to breakfast and bed at the domestic site at Stonar House. We were awakened from our watch slumbers by Sergeant Platt and assembled in front of Stonar House, with our Sergeant Belcher, Sergeant Hatter, and various minor NCOs [Non-Commissioned Officers] in attendance, for an address by Squadron Leader Mundy. He reminded us of our duties as serving members of the RAF and the requirements of the OSA [Official Secrets Act] and to forget especially the odd occurrences of the past night and not to mention same to anyone not connected to the RAF.”

But that was not all: “Going on watch that evening we found that the Duty Watch Book, normally only replaced when completely full, which recorded every air engagement, every PBX message, every official order by the watch-keeping officer, made during every official part of previous watches, including the previous night’s activities, as an official Watch Book is required to do…had gone. Replaced by a brand new shining Duty Watch Book.”

posted on Apr, 13 2019 @ 12:15 PM
link
Clip citing three separate UFO incidents described by witnesses on different tours aboard the USA FDR - no record of any sightings in ship's logbooks.


Also some pretty wild claims of USO/UFO activity in this presentation.

posted on Apr, 13 2019 @ 12:45 PM
link
Thanks for sharing all of this in this thread I can't add anything relevant to it but I do want to say how it intrigues me about missing log books and missing pages only to think somewhere sitting in a vault or in an archive that the evidence of unknown UFOs are there to be read yet it's all kept a secret and for a reason


Appreciate the post Peacemaker and it certainly intrigues me too - think you may be right about that vault mate and it probably contains all the gun camera footage as well.

When it comes to UFO/USO Naval log book shenanigans it looks like there may be yet another example below involving astronomer Marc D"Antonio and a submarine sonar operator tracking an underwater object travelling at several hundred knots - the order then came down from the commanding officer to "Log it and dog it".

posted on Sep, 23 2019 @ 04:39 PM
link
Why am I not surprised that destruction of logbook records seems to be SOP for such encounters?

Everybody zip your lips and talk about nothing at all.

Someday when I am not lazy I think I will start a thread of random military sighting quotes. Just to remind people how long these things have been seen and how far ET's 1940's technology was ahead of us.

NASA took a photo of a Black Triangle UFO in space and called it space junk.
(Refer to third photo down in link below
www.thelivingmoon.com...

In 1971 the submarine Trepang also took a photo of a triangle UFO.

Ever notice how much these two Triangles look alike?

Thanks for reminding people that navy UFO sightings are not new.

Thanks for the post mate and completely agree that Navy UFO sightings are nothing new - still waiting for the release of the findings of the official investigation by the Office of Naval Intelligence way back in 1952...but am not holding my breath.

When it comes to triangular UFOS have you looked into the work of David B Marler - he's conducted some excellent research into early archived reports and thought the presentation below was a great one.


Since the early to mid-1980s, there have been an ever-increasing number of UFO reports involving triangular-shaped objects. To many people this seemed like a new development in the field of UFOlogy. Indeed, the majority of UFO sightings that have been documented over the last 50+ years involved a multitude of shapes, sizes, and colors. In comparison to other UFO shapes reported, triangular objects were a relative minority. Marler was amazed to find numerous cases worldwide spanning the last 60+ years that involved triangular-shaped UFOs. He felt it was important to share this material, since many people were dismissing this particular subset of UFO reports as secret military aircraft. These same individuals are erroneously implying that these craft are something relatively new in our skies. He has established that reports of these objects are nothing new and that similar objects have been reported worldwide at least as far back as 1936. Also, that these UFOs have consistently displayed similar physical attributes and flight dynamics that strongly argues against the notion that these are “new” military aircraft.Featured speaker at MUFON Symposium.


"Gentlemen what you have just witnessed did not happen"

UFOs, UAS & UAPs from military witnesses down under 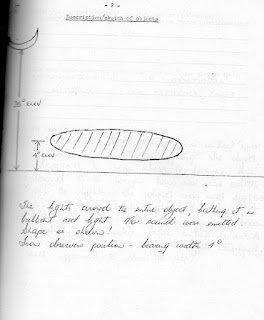 “I looked up and there was this long cylindrical silver object, about 20m long, with a heat-haze around it.

“It was following the ship no more than 500m away. We could see it very clearly in the night sky. I called out to the officer-of-the-watch and five of us all looked up at this thing for at least a good minute.

“As we watched it suddenly instantly accelerated and then disappeared into the distance. The acceleration was amazing, instantaneous.