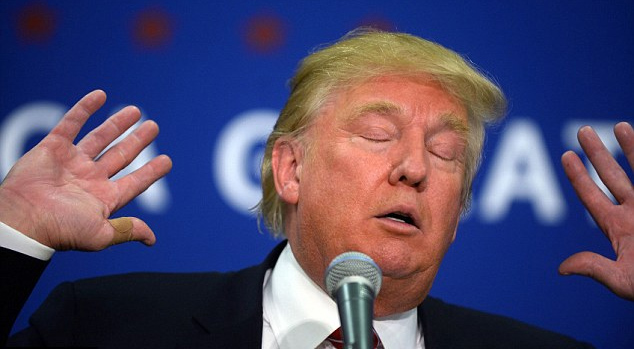 It focuses on punishment for doctors who give abortions after 20 weeks,(excluding medical reasons)
They will be issued a class C felony

-That is ALL it covers

The GOP #WarOnWomen is back. Here's a link to the bill that just dropped hours ago: http://(link tracking not allowed)/2nsg9zw #ialegis

That link goes to the version of the bill they're saying "just dropped" two days ago. When was the last update to the legis.iowa.gov site?


Of course it would have to be a legal abortion whereby if one partner wanted an abortion and the other didn't that would absolve the one wanting the abortion of responsibility raising the child but they could not terminate.


Thank you for explaining what you meant by "abortion." It's actually not what this thread is about.
Instead, it's about a "father" saying, "If you don't abort, I had nothing to do with it. So, see ya!"
edit on 3/30/2017 by Phage because: (no reason given)

why hasn't modern law outlawed it yet?

I gaurantee you TheAntdelivuain burkas will not be sold in any Wal*Mart not on my watch! I dont know of a single soldier who ever went to Vietnam OR WWII with the agenda to make Burqas' sold to the public. Libs have these rediclous notions that are clearly the biproduct of too much salt in there water or something because its just 100% un American.

Time to wake up people!

The problem with your rant is that for the past many years you supported and defended Hillary and Obama, both of whom have sponsored the increase of Sharia ideologies on a global scale using the UN to help them initiate the wording and legislation on western nations like the United Kingdom and others. Those 2 filthy souls also schemed to get Jihad loving Islamic Muslims as refugees into different states of the USA without telling the state governors they were even doing it. When the issue blew up because of these violent refugees, and before that when congress found out, they claimed these people had been carefully vetted. The problem with that is that the countries they came from like Syria don't have any records on those people in any form, so vetting them has always been impossible and just a lie.

Every single thing you have been seen supporting and promoting has been the very same thing you are now complaining about when some fake rogue republicans are doing it.

Did you have a change of heart, or is it okay when democrats do things like promote Sharia law? Republicans have been fighting against democrats who try to legislate sharia style agendas for years now, so these 2 guys must really be democrats in republicans clothing, and if they really are republicans then they should be forced to change parties, since their actions are not typical of republican agendas. Either way, the only thing you got correct is that what they are doing is very bad. The only flaw is that you never condemned it when Obama and Hillary supported, and still do, the Muslim Brotherhood (just for a single example..

edit on 30-3-2017 by NoCorruptionAllowed because: (no reason given)

Wow just wow! You really got a bunch of people who can't read or choose not to in an uproar with this thread. A summary of this bill is it gives rights to people other than the woman in question to go after a doctor who does not follow certain procedures before performing an abortion. If you read the bill carefully you will find that it is actually in the best interest of the woman to have this. It prevents doctors from performing wholesale abortions for profit as has been done in many of cases. If the doctor does not follow certain steps then the parents or spouse can take action against the doctor. The part about under 18 or unmarried is correct in this case since as I stated above it is extending protection of the woman in question.

Sure. We get it. Jane too dumb, doctor no trust.

I think they do already in places like Detroit Michigan where they are building Littler Mecca.

Any laws that any state passes can not surpass or trample the rights that citizens had under our constitution.

originally posted by: Phage
a reply to: WhateverYouSay


Of course it would have to be a legal abortion whereby if one partner wanted an abortion and the other didn't that would absolve the one wanting the abortion of responsibility raising the child but they could not terminate.


Thank you for explaining what you meant by "abortion." It's actually not what this thread is about.
Instead, it's about a "father" saying, "If you don't abort, I had nothing to do with it. So, see ya!"


Or a mother. I like how you try and pretend a prochoice woman and a prolife man have never conceived together and actually aborted against the fathers wishes.

I cannot believe that in 2017, in the United States of America, a country where we at least like to pretend we believe in liberty, where men and women have fought, died, been inprisoned and suffered all manners of indignity — bled and sacrificed — for their rights and ours, that we still face the threat of the stone age ideas of religious fanatics creeping into our laws!

The legislation in question, SF 471, has already made it through the Iowa Senate and now it's advancing in the Iowa House with a three-person panel voting to advanc e it to full committee.

Buried in the text of the bill, like a deadly scorpion, who having scurried into a cozy slipper by Liberty's bed, waits hidden for Liberty to slide in her bare, unsuspecting toe so that it may plunge its pointy stinger into her undefended flesh and inject its terrible venom, are a string of words that should disgust, horrify and shock every red-blooded American to the core!

When do they start selling Burkas at the Wal-marts in Iowa?

The law expands the legal rights of a woman's parents — an adult woman's parents — to petition the court for an injunction only in the case that the daughter is under the age of eighteen or unmarried. Don't believe it? Here's the text (page 11 at link above):

Ugh! Where do they even find these regressive assholes and how do they get elected? Oh, that's right — it's Iowa and this is the GOP we're talking about.


This post is practically incomprehensible, what is the issue here? burkas? maybe its the stoning of gays. lets read on and see.

hmm no, current year, okay... honor killings.. no thats not the object of the op's ire lets see here, scorpions?

ahh okay, unmarried woman clause, gotcha. it would have been alot easier to parse that if you put that in the first paragraph and put all the hyperbole below it.

If you read the entire thread you'd know that, because the OP explains it.