posted on Mar, 31 2017 @ 12:55 PM
link
Sorry, I always forget to was a lawyer he did not do much there either.Obama never tried a case and only once argued anything before the courts. He was added as counsel on 3 or 4 cases. That is not executive experience. He was a law clerk.

He was also never a law professor. He was contracted as a lecturer. I know it sounds better to say he was a professor but that never happened.

Illinois State Senator as well as US Senator. These are not jobs and there is no executive experience here either. Usually that is only applied to a mayor or governor because they are 'running a state or city' not simply voting.

Ivanka however is an advisor to the president. Kind of like Valerie Jarrett. The one who introduced O and his wife and has ZERO political experience except working for a Chicago mayor and housing company. So if she was ok why not Ivanka?

Did you know the First Lady of China also posed for Playboy?

You're so full of strawman arguments it boggles the mind.

We're not talking about China here, and if you want to go to a Chinese website and argue Chinese politics because they are vastly important to you, then by all means do that.

But some of us are Americans arguing American politics and ethics concerns...I personally could care less what Chinese people think about their First Lady, that's their issue.

What I DONT want is someone like Ivanka Trump having complete personal profile workups on every citizen of this country that she can later in life have complete knowledge on how to market her (mediocre) products to them and exactly what their networths are.

No strawman arguments. Not at all. I was using that one little piece of a post to prove a point about something someone else brought up about First Ladies when we are hear talking about Ivanka Trump.

The mere thought that you truly believe that she is doing this to 'promote' her products is, well, very sad on your part. Yeah. She needed to leave her position to work with her father to help to the country to sell some more shoes...that is idiotic.

Because she's the surrogate first lady, taking on the roll. Doing fundraising, shaking babies and kissing hands. Or whatever. Shes unpaid doing good things for her country, a true patriot.

I find it hard to believe that there's still Liberals who haven't heard the JFK quote, but I'll put it up for you.

Because she's the surrogate first lady, taking on the roll. Doing fundraising, shaking babies and kissing hands. Or whatever. Shes unpaid doing good things for her country, a true patriot.

I find it hard to believe that there's still Liberals who haven't heard the JFK quote, but I'll put it up for you.


I cant believe there's still trolls on the internet that think they're original.

When I see someone attribute noble qualities and motivations to someone they don't know, it's like a projection of sorts, and tells me they are, at heart, a good person.

You are a good person. If everybody had the intentions you seem to, the world would be a better place.

Like you, I with my good and excellent heart have done the same. But too many times I have been disappointed and simply wrong. I hope you're not. I'm just thinking if he needed another advisor, he would have done well to shop from the experienced intellectual patriots, and not an entrepreneur. We have enough of those.

I don't have anything bad whatsoever to say about Ivanka Trump. I just don't see how anybody could pretend she belong's in the White Day Care Center, pardon, I meant the White House.

well you know Hillarys Motto vote for me because im a woman.

But at the very least, she has a law degree from Yale, was the first female partner of Rose Law Firm, served as congressional legal counsel, Senator of NY, Secretary of state - so as crappy a candidate as she was, she at least BELONGED in politics and could talk intelligently about some of the issues facing a nation.

Belonged in politics because she went to Yale? She was a horrible SecState and did nothing as Senator and was a failed candidate twice. She can maybe get the morning shift wiping tables at McDonalds.
edit on 03pm31pmf0000002017-03-31T21:31:49-05:000949 by matafuchs because: (no reason given)

Thank-you for not blowing up at me.

On a side note, As a measure of cost cutting it does make sense. She receives secret service protection anyways, she might as well give back what she can.

well you know Hillarys Motto vote for me because im a woman.


And what does Hillary have to do with the topic at hand? Nothing. Trump should be called to task for the simple nepotism he is showing towards his daughter and son-in-law.


Not many presidents have sought to hire relatives since then, so the law hasn't often been tested. But when President Bill Clinton appointed his wife, first lady Hillary Clinton, to head his health care task force, the move was challenged in court.

Thank-you for not blowing up at me.

On a side note, As a measure of cost cutting it does make sense. She receives secret service protection anyways, she might as well give back what she can.

But does she deserve access to top secret information?

And why is she better at it than someone else? I know someone mentioned she' s taking the role of the First Lady - but First Ladies never sat in on policy or accessed top secret briefings.

originally posted by: matafuchs
a reply to: alphabetaone
What NONE of you can do is give a good, solid and valid reason why she should not have the position she was giving.

Trump has a history of choosing very poor advisers... people he likes personally but who are poorly qualified (Besty DeVoss, for one.) Ivanka playing hostess is troubling enough (since she's tied herself to her brand, even when she steps away from it) but we Americans deserve something better than "she's cute, she runs a business supported by her billionaire family, and her daddy loves her."

A better choice would be a lawyer who could warn Trump when his policies and proposed Executive Orders are likely to run into legal battles.

An even better choice would be a Constitutional scholar.

An even better choice than that would be a long-term ambassador who had developed a relationship with international politicians because we're starting to lose ground on a number of international deals and would have warned Trump not to try the stupid "hand Merkel a $300 billion bill for NATO" - could have told him the facts beforehand so he didn't make America look like a fool in front of the entire world.

How about appointing someone who would Make America Great instead of Making Daddy's Business Great.

Belonged in politics because she went to Yale?

As opposed to being an FIT valedictorian? yes, absolutely.

originally posted by: alphabetaone
Am I simply making something out of nothing here? I don't think so.

An unpaid adviser is called a volunteer. And I doubt she needs the money. She's already being sued over her clothing line. We'll probably never know if it's an ethics violation, given the current government. But seriously, what is she going to advise him on? It seems an empty title/job.

Ivanka Trump’s #WomenWhoWork guide to getting the job you want;
Unpaid labor and a vague title never looked so glam! Here are 5 tips for blazing a White House trail of your own


2. Don’t be afraid to walk away
So you’ve made the case for the job you want, but your boss isn’t budging. Why should he? You’ve made yourself too available, and that makes you seem desperate. If you know he has a huge career-defining deal to close, and you know he can’t do it without your advice, skip town, go skiing in Aspen and let him fall on his face in front of the whole world. To up the stakes, take his closest adviser with you. He’ll think twice next time he ignores your advice on health care reform and tells you to host another dinner party about day care, won’t he?

5. Nobody needs to know your #ExtendedJobTitle but you
You have a high-profile office, security clearance, a vague title, unchecked influence and access to the highest office in the land, and yet no formal job description. Congratulations — you’re a totally modern inspiration for working women. Who knows what you’ll be able to achieve now? You’ll make us wait for the unauthorized biography to find out. 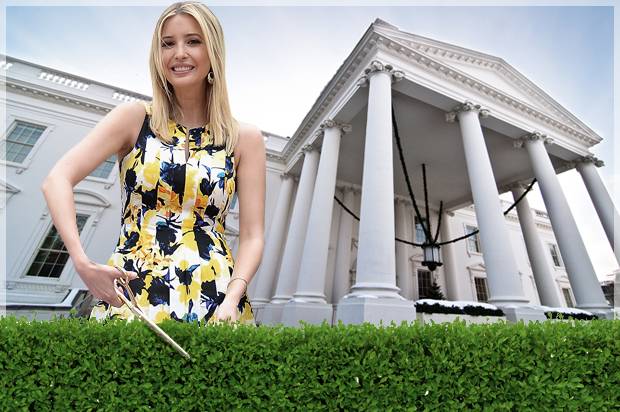 What's Ivanka doing to that hedge with those large scissors?