posted on Mar, 29 2017 @ 12:23 PM
link
The Yemeni Army’s Rocket Battalion launched three or four new ballistic missiles at their Saudi oppressors yesterday which they claimed hit their targets at the military base outside Khamis Mushayt, and is what regional press are reporting. However, the Saudis claim to have intercepted four targets. The Yemen video release of the new Qaher-M2 medium-ranged BM only shows three launches. Perhaps it was only three, but the Saudis launched six just to be safe. The video of the Qaher-M2 launches were easy enough to find. But I had to scour for some time through some twitter and youtube members in a language with funny letters that I do not understand (probably Arabic) to find the video of the Patriot defense in action, which originated on reddit. Video shows what is clearly at least one direct interception.

Patriot ABM interception from Saudi Arabia and a local news report on it showing one of the downed missiles. 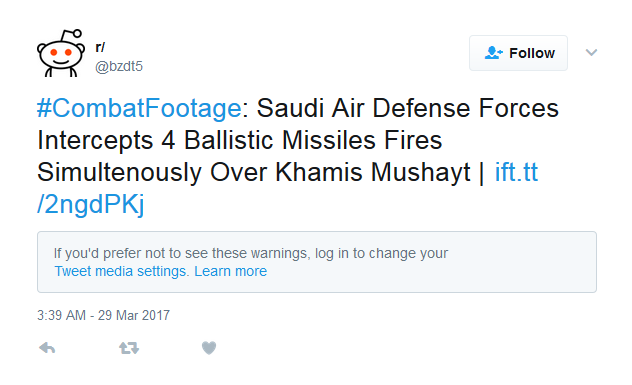 I have not seen any reporting on damage from their target, the military airfield which hosts many of the air power which has been destroying Yemen's infrastructure and contributing to their national famine epidemic. Funny how MSM is not touching that with a 100 foot pole.

And the global war continues...
edit on 3-29-2017 by worldstarcountry because: (no reason given)

oddly enough it looks nothing like the Qaher-M2 shown in the first video. So either that image is from a previous interception with an older BM which they are showing as example andI cannot verify as I don't understand any of that language, or perhaps one of the parties is not being 100.

If its not from a previous intercept, than either the Yemeni's did not actually launch the Qaher-M2, or the Saudis are showing BS. If I could only understand Arabic, I could do more research.

It looks like an image from an intercept last year to me. They may have said it too, but who can tell without a translator.
edit on 3-29-2017 by worldstarcountry because: and e instead of i, whoops

Given the news, I also wondered if we were seeing the real deal. I think we have much dog wagging going on out there.

Part of the billions of dollars of military equipment we sell to a country that shouldn't be our ally.

Ok after careful observation, it appears the news report may actually be from an intercept last year, but was uploaded yesterday. I need to learn Arabic, but that looks just as hard as Japanese.

Part of the billions of dollars of military equipment we sell to a country that shouldn't be our ally.


BUT how else would the parasites that make money from human misery make money, other than pimping out kids for a premium.

posted on Apr, 1 2017 @ 11:17 AM
link
I just wanted to clarify further, because some people misinterpreted what I wrote earlier.

ONLY the news report in the last video was from a prior incident. The OP and the other four videos were of the recent incident and did happen on the dates specified.