posted on Mar, 29 2017 @ 09:30 AM
link
Seriously this time. As much as I disliked him and the last 8 years, thanks Obama for defeating McCain back in 08. The more that doofus opens his mouth the happier I am that he never got anywhere close to the nuclear launch codes. If he were to have won back then, we would have already been at war with China, Russia, Iran, North Korea and be involved in a few other countries. 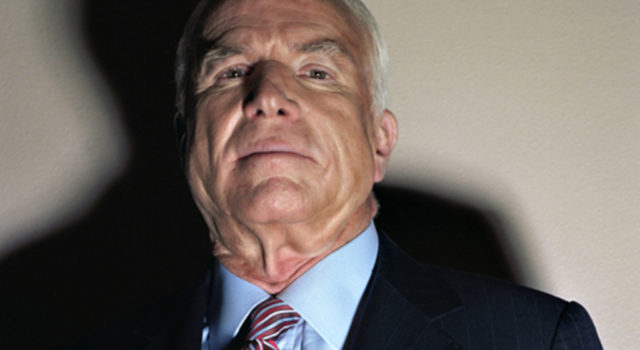 "Providing military assistance to the Free Syrian Army and other opposition groups is necessary, but at this late hour, that alone will not be sufficient to stop the slaughter and save innocent lives. The only realistic way to do so is with foreign air power."

"I would arm, train, equip, both from without and from within, forces that would eventually overthrow the governments and install free and democratically-elected governments"

"The best course for us, NATO, Kosovo, Russia and even Serbia is to begin fighting this war as if it were a war, with huge stakes involved, instead of some strange interlude between peace initiatives…To that end, we should commence today to mobilize infantry and armored divisions for a possible ground war in Kosovo."

"If [Bosnians] were equipped,especially with TOW missiles, some heavy armor, some tanks, then I think that we could foresee a stable situation." 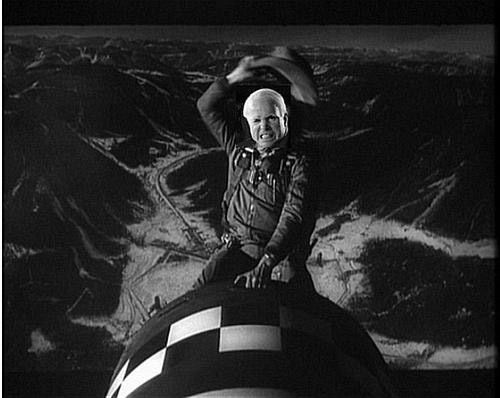 "NATO should immediately establish and enforce a no-fly zone over Darfur to ensure that Khartoum ends its offensive military flights and bombing raids, as the Security Council has already demanded…[T]he United States should intensify efforts to persuade UN members to commit troops and funds for the UN force in Darfur, and it should develop plans for US logistical support."

"We need to have DOD assistance as much as feasible and necessary to prevent Mali from deteriorating further into a chaotic situation."

"The Arab Spring is coming to China."

When you attack a country, it’s an act of war and so we have to make sure that there is a price to pay so that we can perhaps persuade Russians to stop this kind of attack on our very fundamentals of democracy

There are a ton of more examples out there. This guy (among others Pelosi, Grham, etc.) personifies everything that is wrong with Washington. I wish people would stop voting in the same people year after year. We know something like term limits will probably never happen, so it is up to us to stop voting in these idiots. 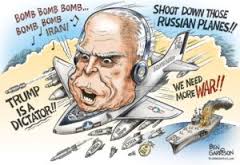 posted on Mar, 29 2017 @ 09:39 AM
link
At some point we have to put America infrastructure first and stop bombing ragheads for Israel.

Let's also not forget about the time McCain went way out of his way with public statements to the media about "suspending his presidential campaign" in order to "assist" with the 2008 Financial Crisis Talks.

In actuality, Congress had finally seemed to come to some agreement about the Troubled Asset Relief Program, but McCain shows up and basically throws a hissy fit, so Congress had to reconvene and go come to the same conclusion all because of McCain's big show. What a ****sucker that guy is.

Yea there is a lot to hate about this guy other than all of his war mongering. He thinks very highly of himself

Why should either branch be allowed members a longer tenure than a president?

posted on Mar, 29 2017 @ 10:32 AM
link
McCain was guaranteed to fail, just like Romney. They threw Obama a bunch of softball candidates that nobody even liked.

Trump beat 16 Republican candidates as well as the DNC's golden child, Hillary. But keep telling yourself that.

originally posted by: Konduit
a reply to: Wide-Eyes

Trump beat 16 Republican candidates as well as the DNC's golden child, Hillary. But keep telling yourself that.