Whatever happened was resolved quickly and with no loss of life.


The police had the benefit of knowing to expect a copycat UK attack.


the media is squirrely and reporting something

they know their audience...

naw, its eerily similar to virtually the same thing that happened back in 2013 during government shutdown.

The question is, why are women going crazy with their cars outside the US Capitol ??? Possible sleeper agents for some unknown motives?? I remember I was sitting down at BK eating a Texas Whopper as I was watching it go down live.

I was... eating a Texas Whopper as I was watching it go down live.

Is this a euphemism?

Anyhoo, i suspect that it may not be terrorist related as there's almost always a body count when it goes from the planning stage to the execution (if you'll pardon the pun). Could be wrong though of course..

What euphemism, I was literally eating a Texas double whopper at BK watching their tv when that event in 2013 went down.


They like to play around with specific combinations and recipes and assign state to it. I have had sandwiches from BK that were described as Texas, Alabama, Missouri, and I think one more that I cannot remember.

Ahh.. Thanks for clearing that up...

Initially I was concerned that perhaps a 'Texas whopper' might be akin to the likes of 'Cleveland steamer' or some such thing..
edit on 29-3-2017 by Indrasweb because: (no reason given)

Lets compare and contrast the incidence with 2013. Here is the woman that was taken into custody, from Olivine's source on page 1. 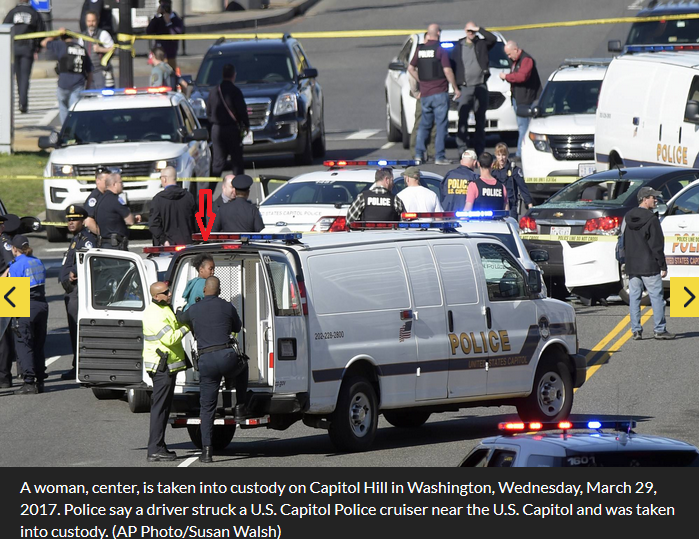 Possible BLM motivated terrorist attack attempt?? BLM terrorists have murdered law enforcement before, and routinely attack civilians during their riots (declarations of war). Its a possibility.
Woah is it me, or are the cars involved in both this incident, and the one from 2013 the same car? They both appear to be black late mode Chevy's ?? I guess it could be coincidence...

Compare the cars from the 2013 video to this one here

Yes, It's a possibility... Shame on me that i automatically assumed that it was Islamic terrorism that the discussion was about and it didn't even occur to me that it might be something like BLM.. I guess that's maybe because we don't tend to have quite the same race-related issues over here in Blighty..

ETA: Also, crikey! Just watched the video you posted of the lady from 2013.... Wow.. Just.. Wow.....
The cops just opened fire on her with a toddler in the car??? Christ on a bike...
What was the motivation for that particular incident do you recall?
edit on 29-3-2017 by Indrasweb because: (no reason given)

hehe, we all joked it was because her food stamps were cut off! There actually was an incident in which the government claims was unrelated during the shutdown when many people in different states EBT cards stopped working for a day or two. Ironically, there were a handful of other states in which the accounts suddenly went unlimited for a similar amount of time.

Walmart's everywhere looked like Black Friday on groceries as soon as it was discovered.

I don't remember though off the top of my head, would require some more reading.


LAWMAKER sends video to me of shooting incident near Capitol. He was stuck in an Uber


In that same twitter conversation, Scott Wong, who posted the video sent to him is being solicited by RT, FOX, the Independant, and NBC for the rights to use the video lol! And then you got a couple idiots who think the crack in the windshield is either a UAV or a giant mosquito!

So this TOMO news agency tells that the 2013 incident happened as she got into an argument with White House security and then rammed a gate and left on her rampage. It was an infiniti, so not the same car. An I thought I had a conspiracy going!