This is the first time I've agreed with you.

originally posted by: muSSang
a reply to: Annee

This is the first time I've agreed with you.

originally posted by: The GUT
Anyone who votes against this must be compromised and surely a card-carrying member of The Swamp imo. I can't see it any other way.

Look into the past you will young jedi! do not go to youtube and search the first audit the fed bill for liberals only pain it will bring you!

Bernouts prepare to be educated on how bernie the con man duped you all and 4 years later ran for president after he gutting the first audit the fed bill!
edit on 29-3-2017 by digital01anarchy because: (no reason given)

Yeah, there is that. The financial system can't keep pretending that fiat money is sound economics. It's inevitably going to fail at sometime, maybe the sooner the better.

originally posted by: eisegesis
Rep. Carolyn Maloney, a Democrat from New York, said the measure would lead to higher interest rates because it would undermine the market’s confidence in the independence of the central bank.

Reads as: 'But, but, but... The public might discover that the Fed is a scam not fit for purpose!'


Yet you want world government.

“This bill would open the floodgates to political interference in monetary-policy making,” said Del. Eleanor Holmes Norton, a Democrat from the District of Columbia.


Rep. Carolyn Maloney, a Democrat from New York, said the measure would lead to higher interest rates because it would undermine the market’s confidence in the independence of the central bank.


Republicans said the measure was needed to rein in the Fed.


The Republicans don’t even need a reason, lol. It's simply seen as the “right thing to do.” Regardless, your political affiliation should not stop you from wanting to keep independent banks from manipulating America's currency in secret and without impunity. 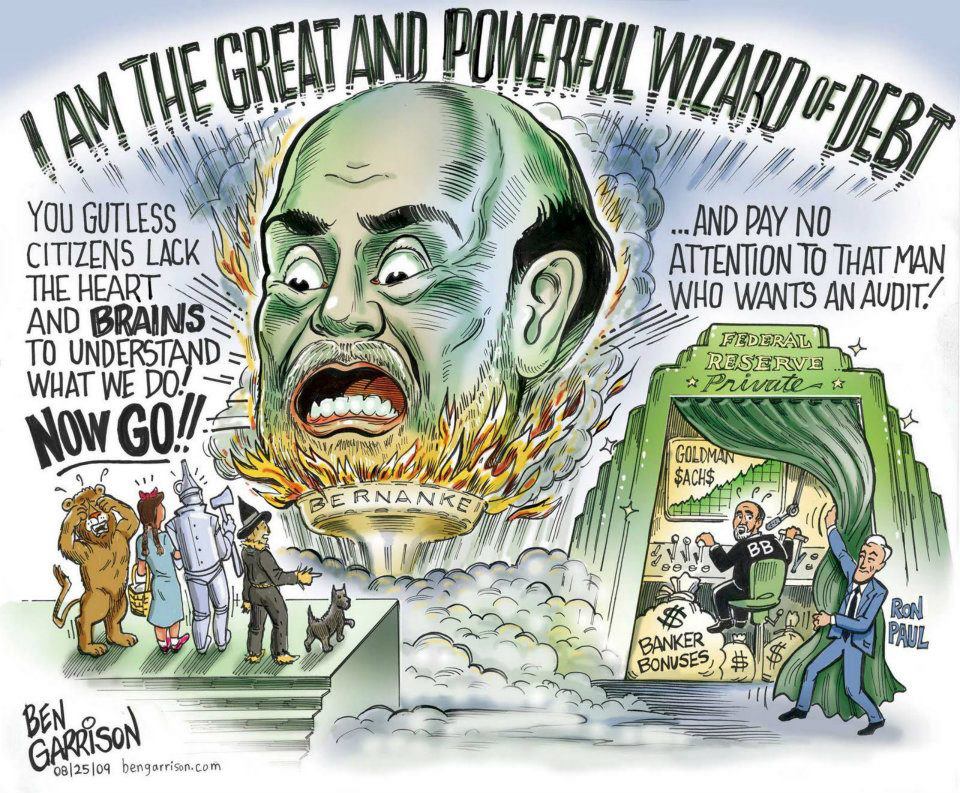 Haven't those flood gates been open for a long time now? Probably since the fed was formed. ....

Unbelievable, possibly the biggest problem society has is the criminal banking cartel, of which the fed is a large part and just two pages about auditing the fed. Just sad really that people can go for days-weeks about Trump and ketchup on steak, but this seems to fly over so many heads.

posted on Mar, 29 2017 @ 12:25 PM
link
If this happens then it will be the biggest win of them all.. but make no mistake this is where the road ahead gets dangerous for everyone involved.

It is also another big test for the Senate and will give some insight into who is bought and paid for.
If it passes the Senate then Trump's response will tell us all we need to know about his intentions too.
edit on 29/3/2017 by UKTruth because: (no reason given)

posted on Mar, 29 2017 @ 12:35 PM
link
A house panel approved a bill to audit the Fed. Panels and committees approve things all the time. 99 percent of those never even get heard in a general session or voted on. I would be willing to bet this never advances to the point of being put to a full vote in Congress.

posted on Mar, 30 2017 @ 06:48 AM
link
Yup. Careful what you wish for.
And what do you think would possibly come from this anyway?
99% of what I read is so far off from the truth it's not even funny. People think they know everything about the FED and they know nothing. I mean some people actually think they print money LOL! Some people actually think the FED is a federal organization! Seriously... people need to find an education.
edit on 30-3-2017 by Scorpiogurl because: (no reason given)

You know what that is a great idea.
From now on anytime any dem is the head of anything I will not trust it. Cant trust those pesky dems.

originally posted by: hounddoghowlie
a reply to: eisegesis

i think it's a fine idea... but, whose to say that the fed doesn't have two sets of books. one that balances out and one that their bosses get to see.

i mean people been bitchin about auditing them since almost from the get go, be foolish to think that they would keep only one set of books that shows the true deal of what they have going.

Wow, two sets of books. Kind of a huge waste of time and energy! Anyway, there would actually be 24 sets of books since there are 12 districts.

so you never heard of false books, what world do you live in.
and did i say just one of set books, i distinctly remember saying sets of books. i do know that there are 12 banks and 24 branches. so depending on what kinda number game you want to play lets see. 12x2=24+24x2=48, 24+48= 72. or just two master sets kept within the offices of the Board of Governors in DC.

well what do you know, i did say sets of books

but, whose to say that the fed doesn't have two sets of books. one that balances out and one that their bosses get to see.

ETA: and if you want to get real technical, if one wanted to include all the member banks which if i recall correctly is about 8000. plus if i recall correctly about 20,000 banks and depository institutions. but for this thread it's just about the banks and branches that have the name Federal Reserve of Boston, New York, Philadelphia, Cleveland, Richmond, Atlanta, Chicago, St. Louis, Minneapolis, Kansas City, Dallas and San Francisco.
edit on 30-3-2017 by hounddoghowlie because: (no reason given)