originally posted by: Mictain
This video is from 4 years ago. What became of the story since then?

It was properly investigated and nothing was found.

posted on Mar, 28 2017 @ 08:37 AM
link
Why are threads like this allowed? It leaves out pertinent information such as how old the video is and what occurred since then.

This is just a thread for flags and stars.

Wow. This has major implications.

But I feel like I've said this before about plenty of revelations in the past year or so. The question is WILL THERE BE ACCOUNTABILITY?

Surprising to see that NBC news is covering this though. That's a very good sign...
edit on 28-3-2017 by AgarthaSeed because: (no reason given)

Well, I just read this on one of my FAVORITE "right wing echo chamber" news outlets TODAY and decided to share it with everyone. The fact that this is making the news again, is probably because of the way it was swept under the rug. I'm sorry that I'm hurting your feelings BUD, because it's obvious you have a soft spot for Hillary.

Even a broken clock shows the right time twice a day.

I also wouldn't be surprised to discover that the Clinton Foundation is a front for the international sex slave and child trafficing trade too. 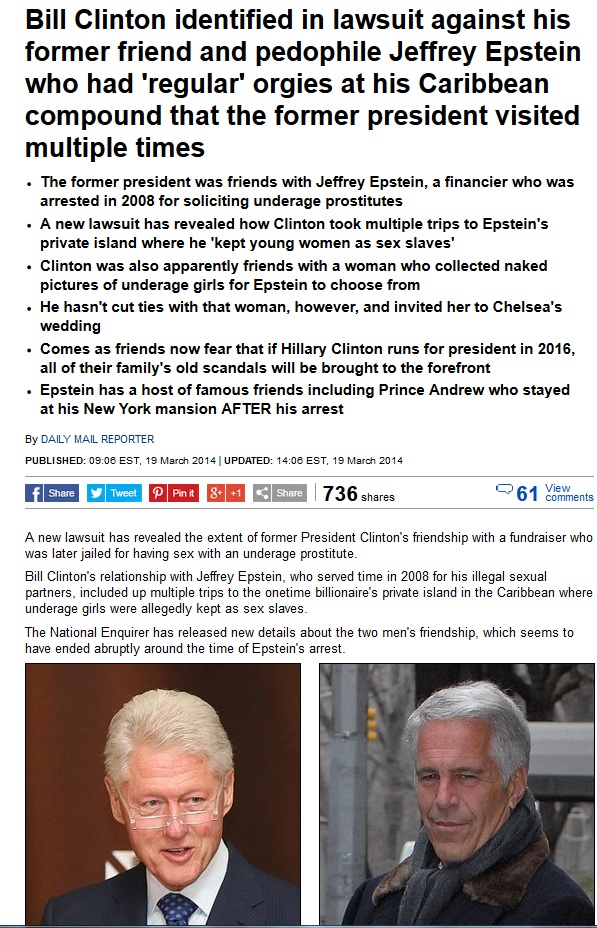 Well, I posted it because it's making news again TODAY. It proves, once again, that Hillary is a criminal and she belongs in jail. Sorry if this hurts your feelings.

Well who could forget this:

Contrary to reports in the media, the crowd sourced investigation labeled by some as "Pizzagate" did not begin with internet sleuths digging through the Wikileaks Podesta Files releases looking for pizza parlors and encoded language discussing human trafficking. It began with the shocking discovery that Hillary and Bill Clinton provided assistance to convicted child trafficker, Laura Silsby, resulting in a reduced sentence for child trafficking.

Silsby was arrested at the Haitian border attempting to smuggle 33 children out of Haiti without documentation. Her sentence and charges were reduced after an intervention by Bill Clinton. In the aftermath of Silsby's arrest, her originally retained lawyer Jorge Puello was arrested in connection with an international smuggling ring accused of trafficking women and minors from Central America and Haiti. The revelation of this news in November was either ignored by the Western media or attacked by Clinton controlled publications.

originally posted by: Mictain
This video is from 4 years ago. What became of the story since then?

Nothing of course, a Clinton was allegedly involved. That alone ends the case regardless of what makes it to the media or not.

Sorry to deflect but why is this "accusation" taken so seriously when it has to be proven valid? Trump was accused of raping a 13-14 yr old girl, so should that accusation be taken just as seriously as this?

Well, I posted it because it's making news again TODAY. It proves, once again, that Hillary is a criminal and she belongs in jail. Sorry if this hurts your feelings.

Ahh..your that kind of poster. Childish reaction when unable to answer the questions. No more replies to you because you cannot hold an adult conversation.

Now I know you just brought it up for stars and flags because you intentionally left out pertinent information to gain stars and flags.
edit on 28-3-2017 by Mictain because: (no reason given)

posted on Mar, 28 2017 @ 08:58 AM
link
Often said it is likely Hillary was using the Clinton Foundation as a money laundering for this operation
And wonder if Comey and the rest are involved
Anyway , the left will still raise Hillary to godhood
Bad times ahead....

If Trump has engaged in kiddie fiddling then he should be #in shot along with any other pedo - this ain't about politics, it's about powerful people, some of whom are politicians, but certainly not limited to that, engaging in the sexual exploitation of minors.

Hope that clears it up for you. Start a "Trump is a pedo" thread and I might weigh in. Might.

I always think it's funny when people bring up the fact that Trump knew Epstein.

Because it gives me the opportunity to remind them that between Trump & Bill, only one of their names appeared in the flight logs for the lolita express.

You make it so easy.

Sorry to deflect but why is this "accusation" taken so seriously when it has to be proven valid?

Trump was accused of raping a 13-14 yr old girl, so should that accusation be taken just as seriously as this?

Of course! And it was!!! It was all over mainstream news, including the three separate lawsuits filed against Trump and subsequently dropped.

However, to the best of my knowledge, until now, Trump has never been in a position of power or authority to either start an investigation nor to squash an investigation. Unlike the Clintons.

Now that he does have that power, we'll see what he does and doesn't do and judge accordingly.

It is entirely possible that Trump does know all about Epstein's criminal deeds, and if he does, probably many more involved with Epstein and pedophilia, and is just as disgusted nothing was done about it. I'm not holding my breath, but it is possible.
edit on 28-3-2017 by Boadicea because: formatting

I always think it's funny when people bring up the fact that Trump knew Epstein.


Why is it funny?

A thread is coming.

“We learned of it from the media and don’t know anything beyond what’s been reported,” and said the former secretary of State had no knowledge of the investigations. "

Looks like the kooks have been right all along. NBC would never put this on the air and expose themselves to such litigation if the evidence wasn't damning.

It was properly investigated and nothing was found.

Not according to the former State Department investigator cited at the link:

Top state department officials directed investigators to “cease the investigation” into the ambassador’s conduct, according to the memo.

A state department spokesperson would not confirm the specific investigations, but told NBC News “the notion that we would not vigorously pursue criminal misconduct in a case, in any case, is preposterous.”

Former State Department investigator Aurelia Fedenisn has said that investigators dropped the ball in the case, and that a final report published in March of this year was “watered down,” according to her attorney.

“She felt it was important that Congress get this information,” Fedenisn’s lawyer Cary Schulman told NBC News.

State Department spokeswoman Jen Psaki said that the department “would never condone” improper influence on its investigators. “Any case we would take seriously and we would investigate, and that’s exactly what we’re doing.”

Something odd as well about Fedenisn refering to a "final report" already published that was "watered down", but Psaki refers to an investigation in the present tense. Perhaps there was additional investigation that Fedenisn wasn't privvy to, but there was obviously enough suspicion and/or evidence for investigation.

Maybe. Maybe not. The article does not specifically name Hillary (or anyone) as one of the "top state department officials," but she could have been one.

Have you seen the video in your source?

No one touches Mr. Trump's penis without a glove

But your thread is highly anticipated.