originally posted by: NerdGoddess
Part of me says this is uncivilized, the other part of me says "Shut up, Gladiator was your favorite movie"

Exactly, and most of the world have this reaction. There is a potential to make huge amounts of money out of these human urges; scary!

Yes click bait because I am sure wolves and bears will oblige to the law right?

originally posted by: Elementone
a reply to: Revolution9

Martyrs was so horrible to watch. When they find that girl in the basement with the metal thing screwed to her head...and the skinning in the end. What did you think she whispered in her ears?

I have no idea. I could not watch the end. It was the most difficult film I ever watched. I wanted to watch it though, just out of respect for Christ, for all the Christians who were tortured through the ages, for all the women burned at the stake and for all people (women) who are murdered and raped. It's real, people. Best to keep it in check. One day you might be the object of someone's dark lust at your utter expense.

I have anxieties that we could drift into this depravity out of our own collective desire. Once you are a victim it is kind of pointless saying told you so. As we become more sophisticated so our demons become more refined. The evil in "Martyrs" is torture to gain insight. Johnny Depp's "The Brave" is a similar exploration.

Seek and you will find:

The Brave is a 1997 film adapted from the Gregory McDonald novel of the same title directed by, co-written by and starring Johnny Depp alongside Marlon Brando.[1] This film was Depp's directorial debut. He co-wrote the screenplay with his brother, directed and acted in it. The film was first shown at the 1997 Cannes Film Festival[2] where it received mixed reviews. The film was released in theaters and on DVD internationally, but not in the United States.

The film concerns a Native American man named Raphael who lives with his wife and two children in a remote community near a rubbish dump selling whatever he can to make a living. Raphael, seeing the hopelessness of his situation and his inability to provide for his family, agrees to star in a snuff film for a large sum of money that he hopes will give his family a chance for a better life. Having been given the money in advance, Raphael is given a week to live and then return to be tortured and killed in front of the camera. The film follows Raphael's transformation with his relationship with his wife and children over the course of his final week of life and his own personal anguish with his fate. 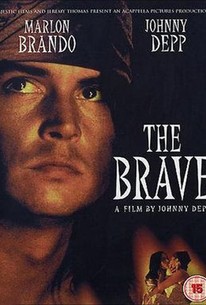 People who have it all are always looking for new refined kicks. Things can get well extreme and we know all about the dark things people do. There is obviously a desire and an urge so strong in some of us. It is latent in most. It is possible for this urge to be exploited as the gaming urge is to make big bucks. On that score, keep a watchful eye. Desperate people sometimes do desperate things for money and wealthy people are only too aware of the earthly power money gives them. The earth is their playground and they don't only play kids games and racing their super yachts, necessarily.

OP, good to talk with you. Seems like we share some similar interests and ideas. Thanks for a great thread. We need to discuss this shadow side of humanity to free ourselves from it.

re "The Brave": The critics hated it. I think Johnny should be well proud because it is a WORK OF ART. I can critically analyze it as I can a good worthwhile novel. It has true and lasting artistic merit. In the U.S its release was not encouraged so that is why you guys don't know about it so much. You can rent or buy it on Amazon. Funnily enough, I watched this last night and bought it. Excellent correspondence of fate. It's an important thing to be aware of now we have all these people with billions who sometimes might not have much of a conscience at all. They can fly around the world without a care, gaining their kicks anywhere and everywhere. Most are pretty okay, but don't expect me to believe that there aren't some very dark minded wealthy people who do some monstrous things to get their kicks.

What I have always wondered is why once someone as become immensely rich and has seen it all, must it lead to darker and obscur fantasies, fetishes etc..

8mm with Nic cage comes to my mind since we are talking about movies. When that billionaire dies and his wife finds a snuff film in his safe.

Which movie is that one?

I will watch this movie. Please watch "The Brave" if you get the chance. I will watch the movie later. I have to prepare my mind and wait for the right time when my analytical powers are maximised. Right now I am trying to be chilled and listen to some music.

Will watch it for sure, kind of funny to discover this movie after watching Don Juan last week with both Depp and Brando.