My girlfriend raves about how awesome it is and i follow her exploits around the galaxy over the phone skyping while listening to the dialong and storyline.

I played all the other mass effect games and loved it. I look forward to playing this one too when the time comes.

Thanks for the screenshots. I just love the jungle planets looks.

Well, my only response to all the whining about the facial animations is:

Let me get them some cheese.

Considering everything else this game has to offer, refusing to play it because some of the animations of the face seem to be off, or not quite right, is like canceling a game because someone saw a cloud in the sky: making a mountain out of a mole hill.

I can take any computer game out there, and find a huge amount of things to pick apart in it.

But, at the end of the day, what I take a look at is the game as a whole, and whether or not it was worth my time and money. So far, Andromeda has both met and exceeded my expectations.

The only time I have ever played a computer game where the people in it looked "real" were those games that used real people. Myst, Riven, Myst 3 and Myst 4 as examples. They green screened in the actors. In the late 1990s there were a couple of Star Trek TNG games that came out that were actually interactive videos, basically, you were playing a movie or episode of Star Trek with real actors and props.

While CGI has come a very long way, even the best looking games out there are a far cry from real life, and even the most "realistic" looking animated characters are not real looking. Even in things like the movie "Avatar"

For me it was: Content and rich environment. And on that ME:A delivers in gold. I've got 40 to 50 GB worth of it, and that far out weighs complaints about the faces.

But, there will be those that will take it to the extreme. Just like "Wine Snobs", I have to look at those that feel that way about ME:A because of how the characters look the same way: "Facial Animation Snobs", hehehehehe

The general consensus is that is that its 'meh.' Some of the graphical glitches are hilarious but from what I've seen its not on par with the original trilogy which was kick @$$.

Not to mention I'm too busy with Horizon: zero dawn which is kick @$$ plus 1.


Its not just fans complaining..bioware admits there is some issues.

and this is a nice direct example


Bioware Montreal is a small untested sect of bioware..they are not the ones who did ME 1-3. its a bunch of new employee hipsters with no oversight.

Its the eyes and eyebrows..and shoddy animations, script glitching, terrible shaders, etc.
it can mostly be fixed..and bioware will fix it because it has been kicked enough now. You can blame EA for "rushing" them, but they had 40 million $ and 5 years to produce this...its not AAA standard

Especially when you consider Witcher 3 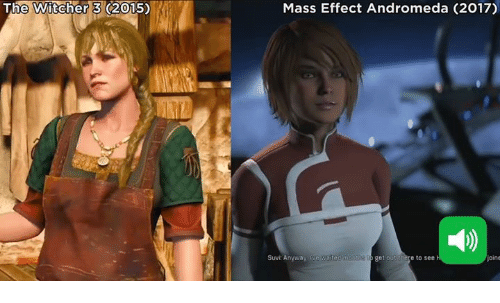 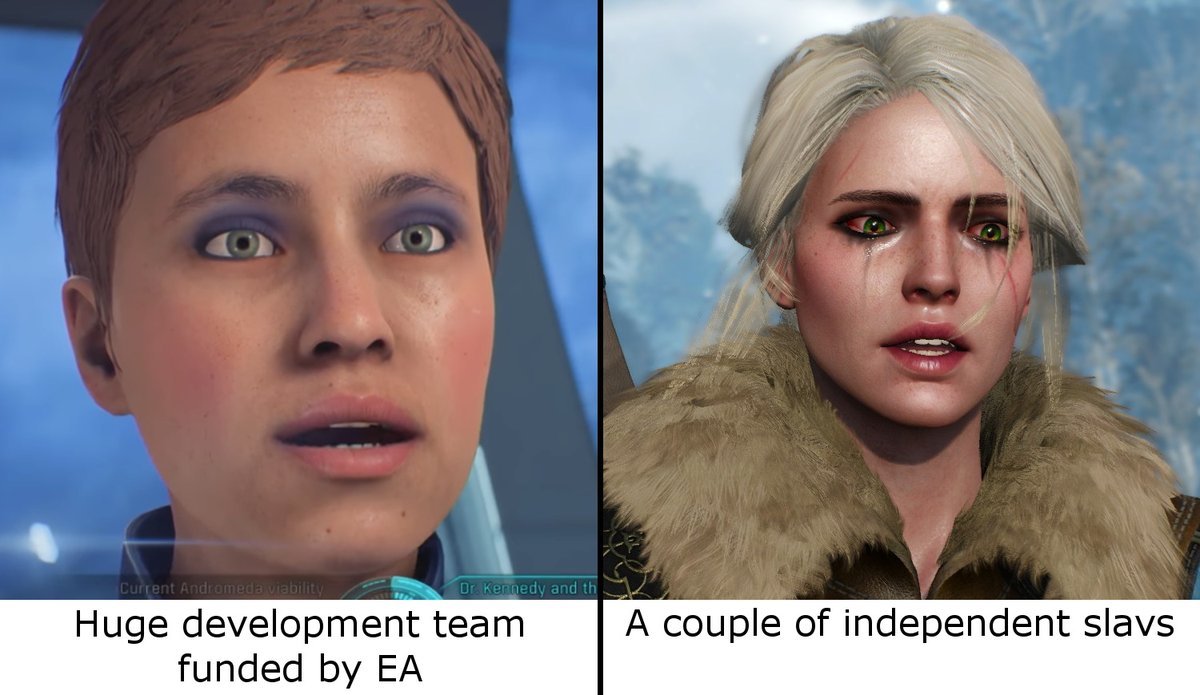 Its unacceptable. the faces look worse than ME2 and 3...much less comparable to CD Project Red's Witcher 3....night and day, and witcher 3 is pretty much a tiny indie firm.

Now, I made this a couple weeks ago in anticipation to the game..because I am an actual franchise fanboy 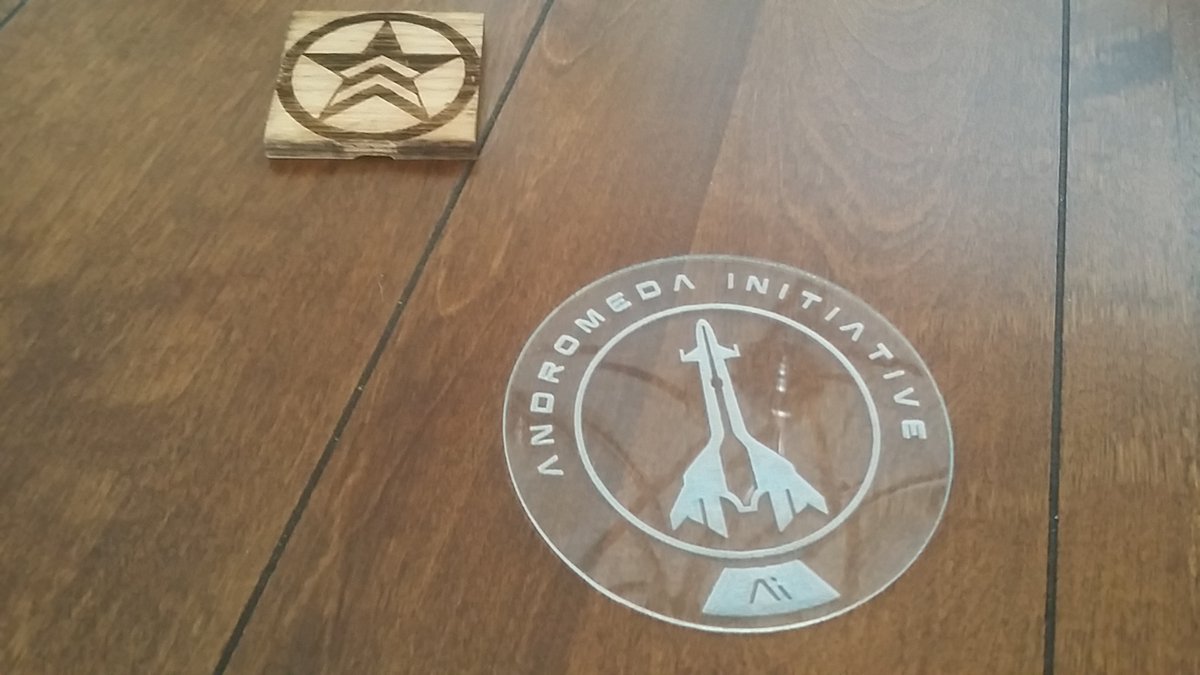 Just messing around with the laser cutter making acrylic coasters and other such gear (okay, there is no more paragon/renegade, but still...who doesn't want a block flipping around for each).
And I fully plan on one day buying it..but once they send out a few patches..or until the modding community figures out how to crack it open and fix it themselves should Bioware (montreal) fail.
edit on 27-3-2017 by SaturnFX because: (no reason given)

That project manager is going to lose his job methinks.

But yeah, spot on. I literally had to forget this was a game from 2017 and once I did, enjoyed it immensely.

The only animations that were decent were the non human ones. The Kett figures all looked great.

Dude i just played horizon zero dawn. That game is sweet. Great animation. And a few of those machines can get your adrenalin pumping. Great facial animation and graphics and i actually care about the plot and Aloy
edit on 27-3-2017 by BASSPLYR because: (no reason given)

I think what gets me is people trying to say how ME1, 2 and 3's facials were perfect......far from it. I've seen everything from eyeliner misaligned to eyelashes blinking below the eyes in those games.

ME2 and several places where your squad mates were moon walking, and some serious graphic glitches, especially during Garrick's loyalty quest.

In ME3, there were several places where Shepard's facial animations and reactions just didn't fit the convo or action that was going on.

My point being that people going around saying that the first 3 games facials looked better need to go back and play those games again, because: No, they were not.

Which brings me to my other point: I have to view anyone that looks at this as something that "totally ruins the game for me", as someone who's a bit too picky. Just my opinion of course. I've played games that have people who look horrible, and yet the game itself was quite enjoyable to play. And for those that seem to think that the first 3 games were perfect......y'all need to go back and play them again, because they were not......and yet: people really enjoyed them.

I'm not here to convince anyone. Far from it. This thread was MY opinion, which is: I'm enjoying the hell out of myself with this game.....and I'm not going to pitch a fit because some of the facial animations textures, etc, are not perfect. I'm not that picky over something like that.

Black Widow isn't new. It was in ME3. It wasn't really worth it though. I never really bothered with any of the snipers outside the Mantis in ME3. In ME2 there were several that were worth messing with, including the Widow and the one that fired several shots in rapid succession.

I am missing my beloved Vindicator AR in this game. I still haven't found it. It was my rifle of choice for a Sentinal loadout. With ultralight mats, I could pack it and nasty pistol and still have full recharge on my powers.

Right now, I have a Sentinal profile running most of the time and am abusing incinerate and overload a lot with the backlash power.

I never said the original three were perfect, but I do think they were quite a bit better. Yes, it has always bothered me when they had Shepard do that wonky jaw-dropping thing when EDI mentions forgetting to cycle the air. But I do feel like the characters are an homage (to be polite) to ME1.

I've never liked you as much as I do right now. Just sayin

You're correct, it was the specter gun in ME3. Up to lvl 5 varients.

Here in ME:A, you have a "advanced" versions that take it up to lvl 10.

Another thing that made me happy: The Scorpion Pistol is in the game. Always loved having a mini-grenade launcher as a pistol.

Another thing that made me happy: The Scorpion Pistol is in the game. Always loved having a mini-grenade launcher as a pistol.

My SMG, Pistol and Shotgun all fire sticky grenades. The sniper fires energy beams that I can hold the trigger and boost, all very nice.

Haven''t bought a damn thing in any of the stores though, cause I can craft much much better.

Just gotta find the right mods. I'm going to start up a new game tonight and play as the sister I think, just for a different perspective, now that I know what the end game quest is like.

posted on Mar, 27 2017 @ 03:37 PM
link
Been seriously thinking that once I'm done with the whole Pathfinder thing, to settle down on Elaaden and open up a Used Nomad dealership: 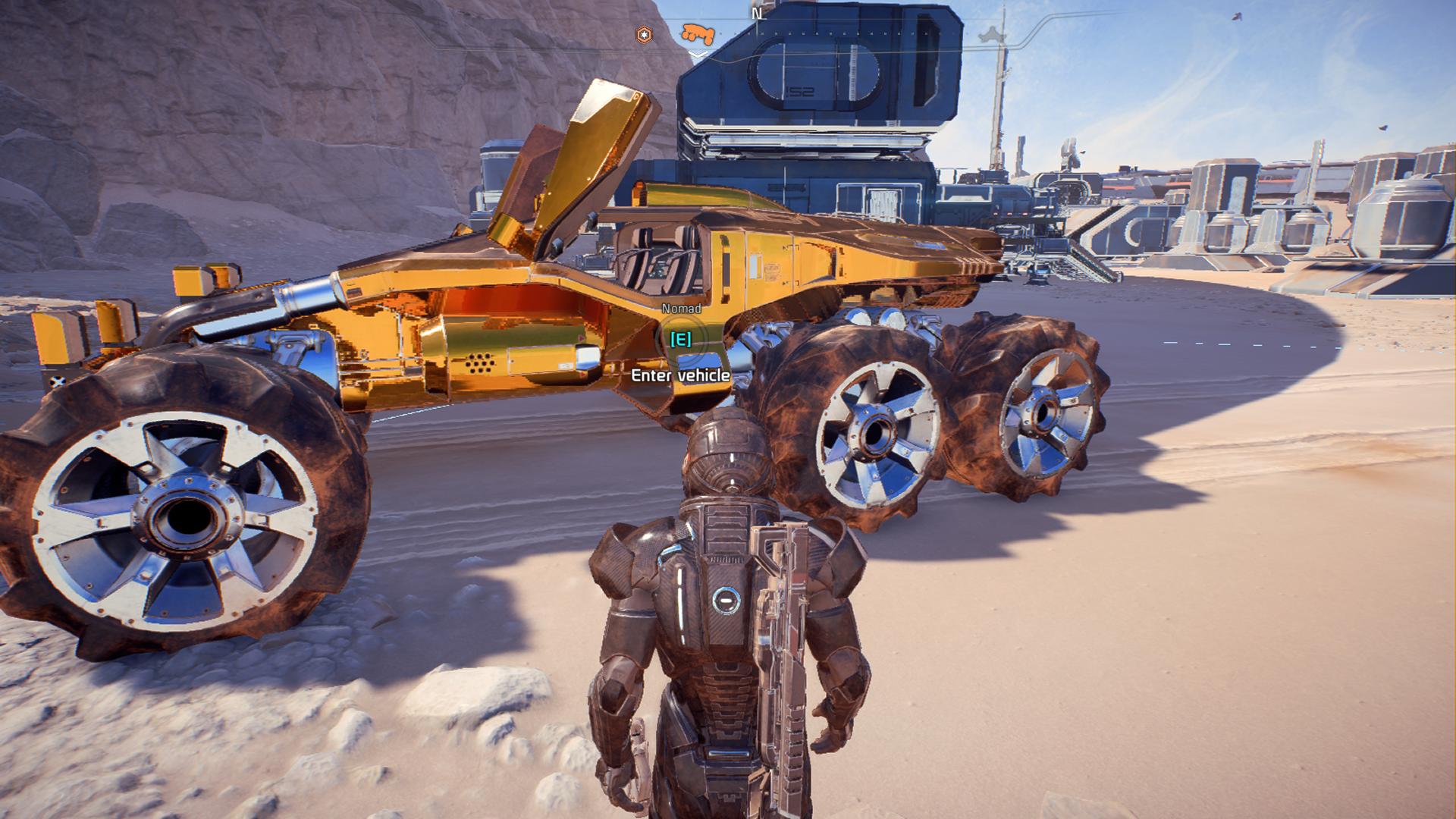 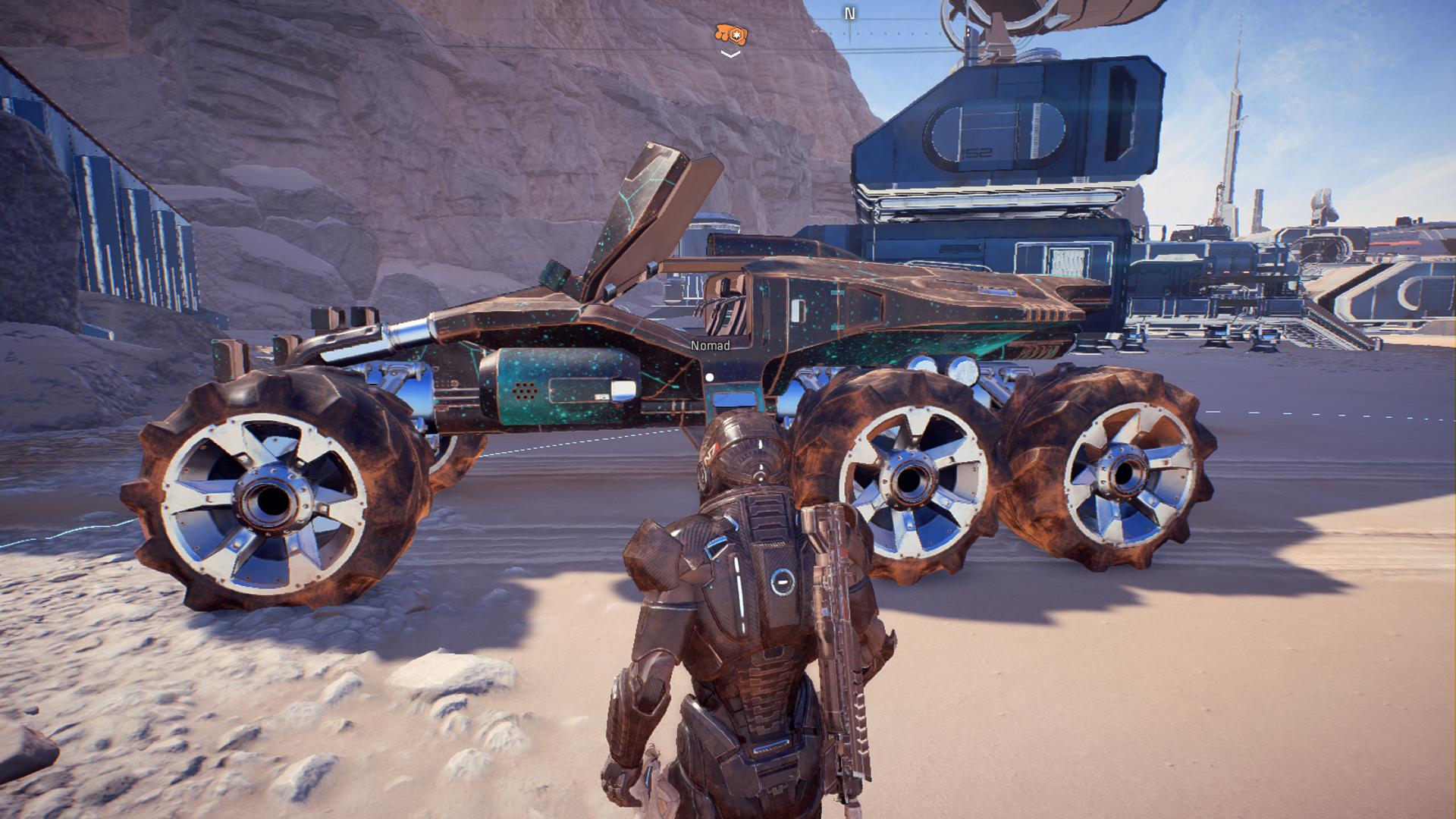 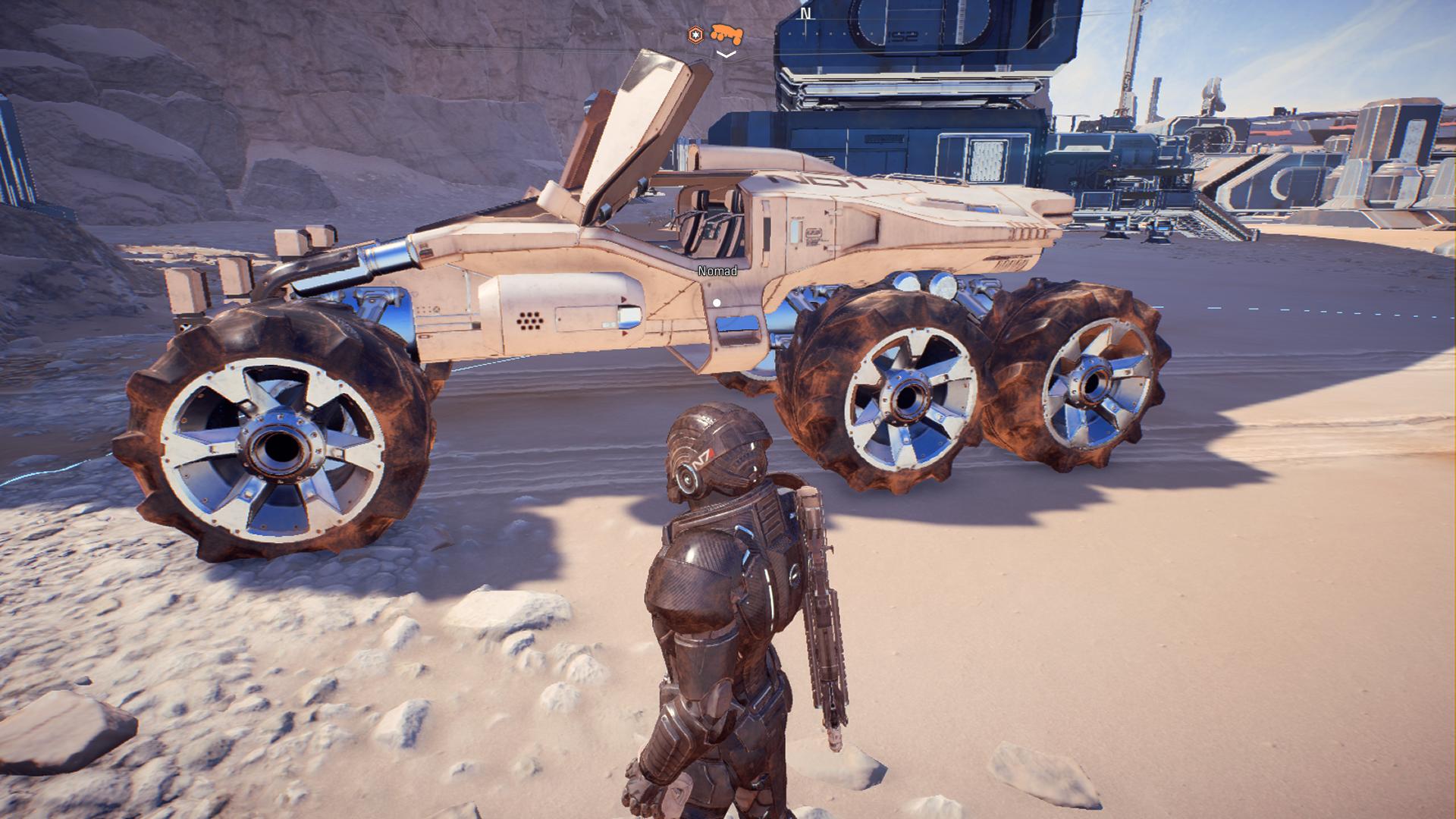 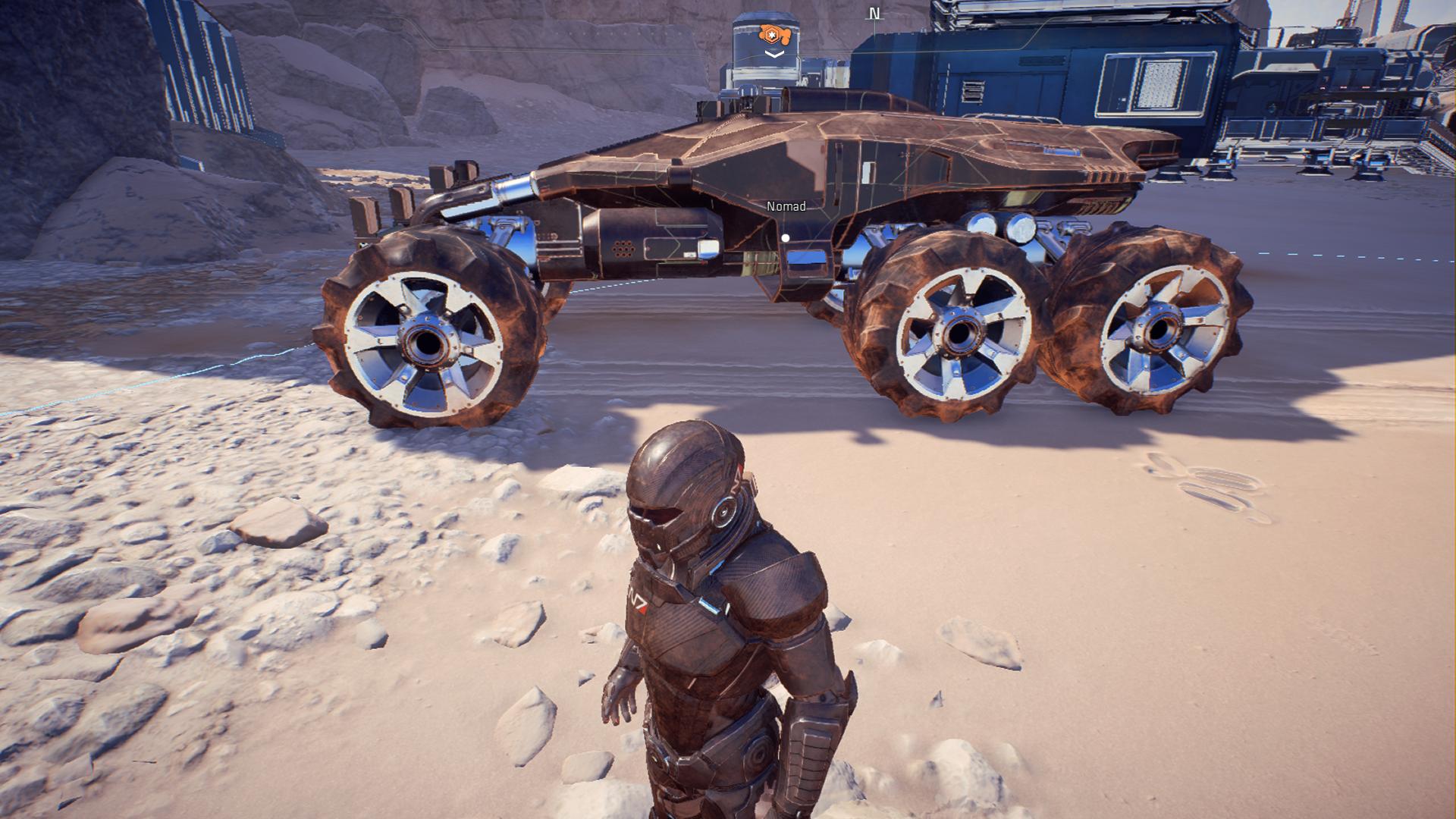 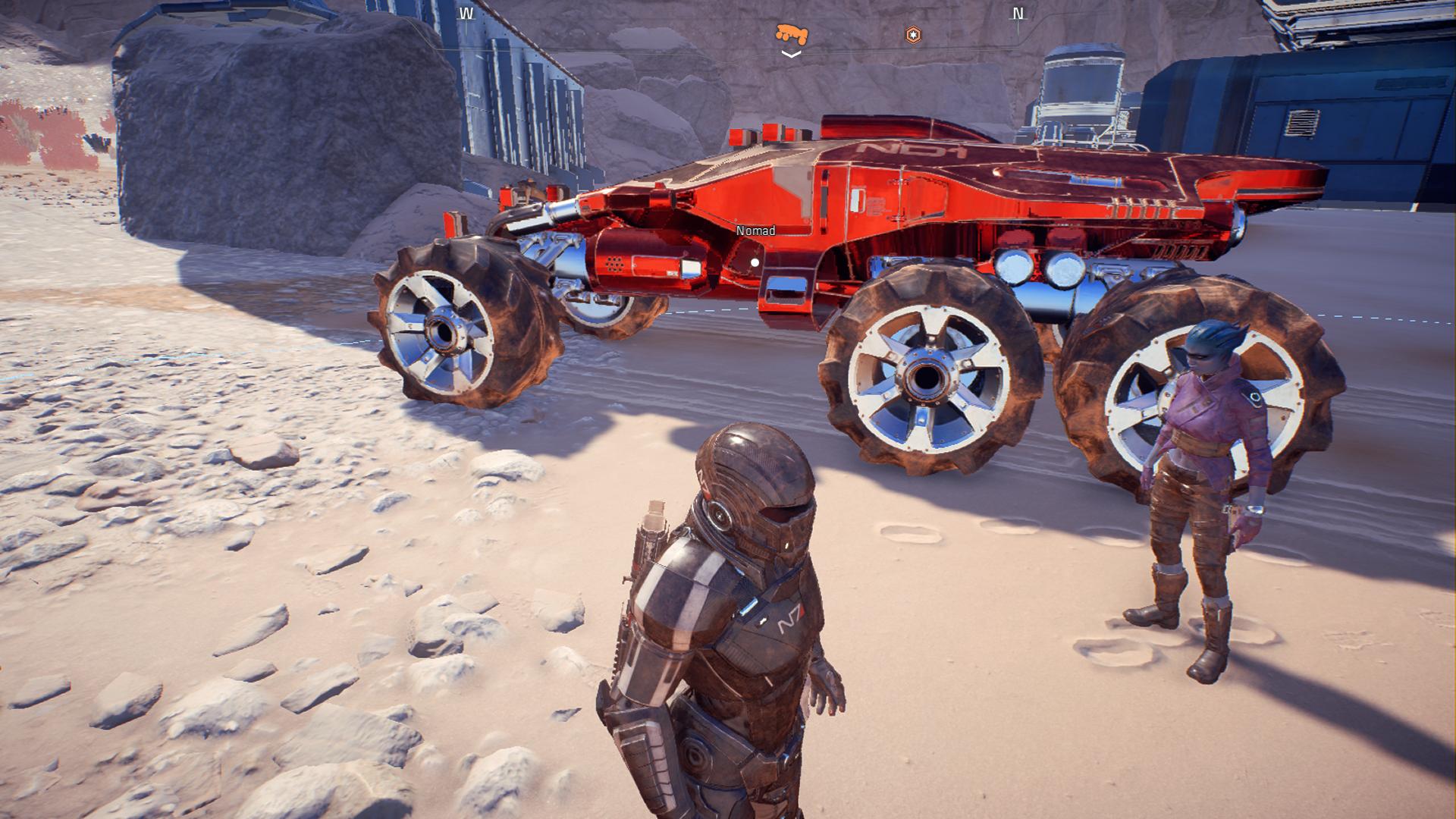 Low APR financing. Any dead beats that won't make their Nomad payments, I'll just hire some of the Krogan there to go get the Nomad, or payment....

Everybody needs a retirement plan, man.

The Scorpion is fun, but I always wound up going back to either the Carnifex or Suppressor. I got pretty good at taking off heads with a scoped pistol, so for a lot of things, a tiny little grenade launcher wasn't necessary.

I'd played the game enough that I was starting to intentionally do mail-slotting.

I'm still on Havarl and I need to go out and figure out the stupid jump puzzle that those mystics are sitting behind ...
edit on 27-3-2017 by ketsuko because: (no reason given)

And you can continue, the game is indeed open ended.

No idea where I picked it up.

Go to the Hefena system.

posted on Apr, 2 2017 @ 05:10 PM
link
I've really enjoyed the game. I don't see how anyone can straight facedly review the game as being less than an 8. That's just being honest.