posted on Mar, 27 2017 @ 09:23 AM
link
WARNING - The following may have spoilers for this game. If you plan on playing it and do not wish to be spoiled in any way, stop reading now and move on to another thread. 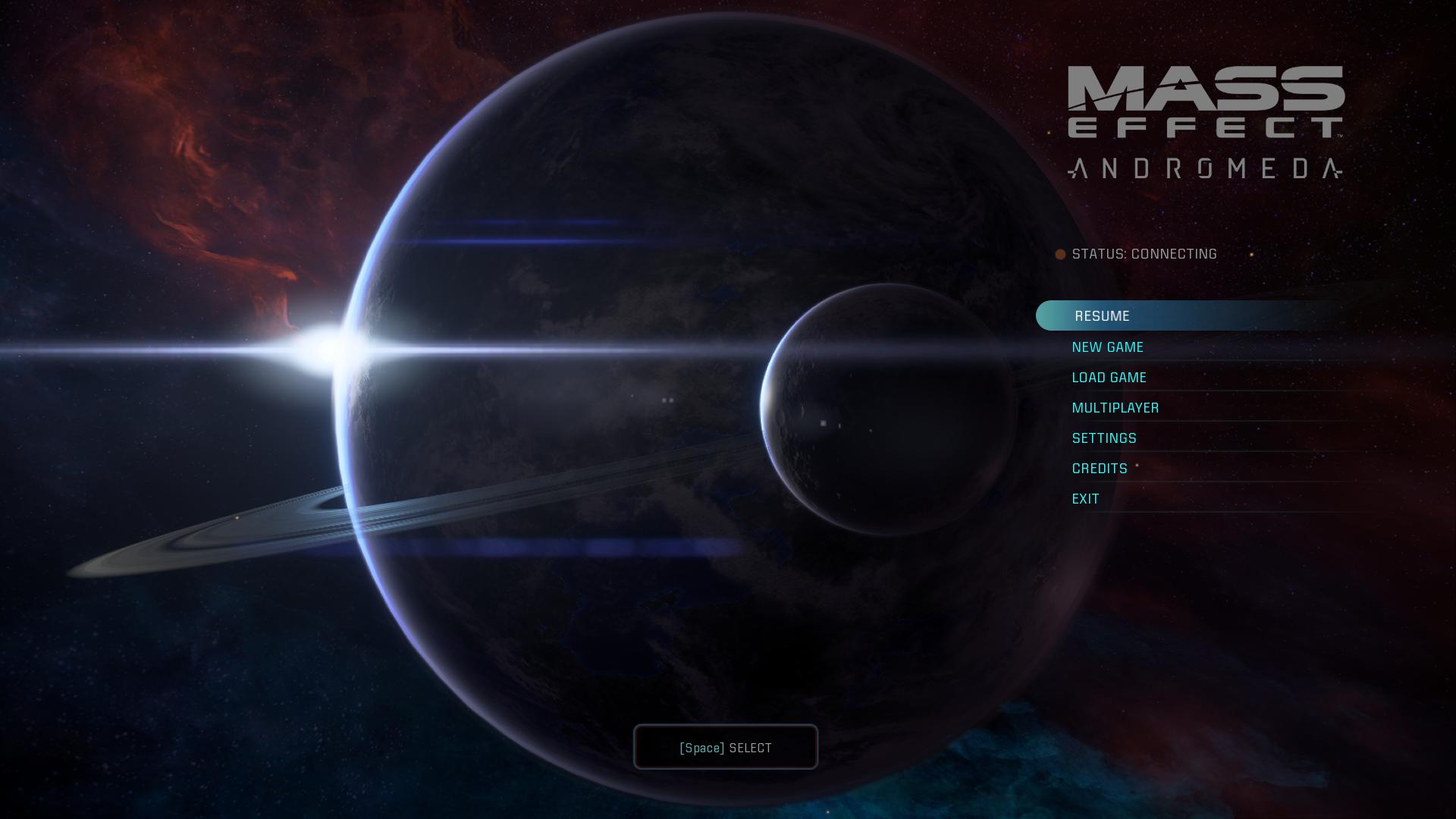 So I'm over 66 hours of real time into playing Mass Effect: Andromeda and having a ball with it. I thought I would drop some screen shots in here and give my thoughts on the game so far. I've not "finished" it, and I'm thinking that there is no real "finish" to it. Even once you achieve your main goals in the game, it looks to be open ended so that you can continue to play and explore like some other games.

When I first heard that Bioware was making a 4th game in the Mass Effect series, my first thought was: What? How? Shepard was killed and the story was over. ME1, ME2 and ME3 were the beginning, middle and end of a story.

For some, this is not what they wanted. In fact, for many, they were very angry at how ME3 ended. No mater what you picked, Shepard dies one way or another. You could do nothing and the Reapers continue the cycle, Shepard and his crew keep running from the Reapers, but in the end it didn't mater. Or, you could try to control the Reapers, resulting in Shepard's death. Or you could destroy the Reapers (along with all the other AI's like the Geth, EDI, etc) and Shepard is killed. Or you do the joining of both AI and biologicals......but Shepard had to sacrifice himself to make that happen. I mean.....here we have the greatest hero in the Milky Way and his reward is to end up dead......yah.......not real happy with that.

But all that and the first 3 games were their own story. Mass Effect: Andromeda is it's own story, with new charactres to get to know, new things to explore, new ways to get into (and hopefully out of) trouble.

I see this game as a gift from Bioware (well....okay, one you had to pay for, but still). It allows you to continue to explore their universe, and even though we are in a new galaxy, with some new aliens to meet and get to know, you still have the aliens we came to know in the first 3 games: 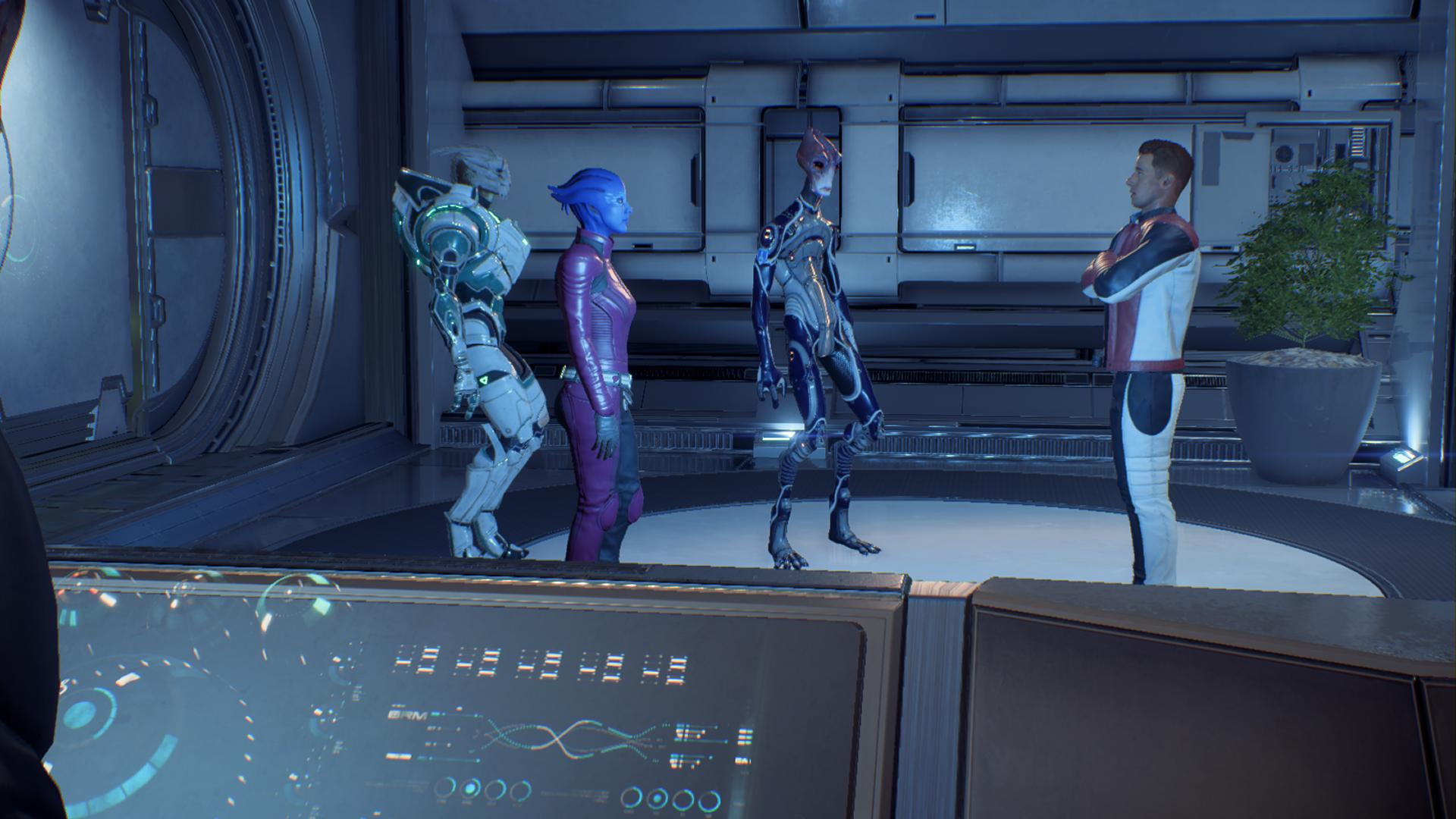 I've explored quite a bit and still have huge amounts of areas to go to, to unlock and to just explore: 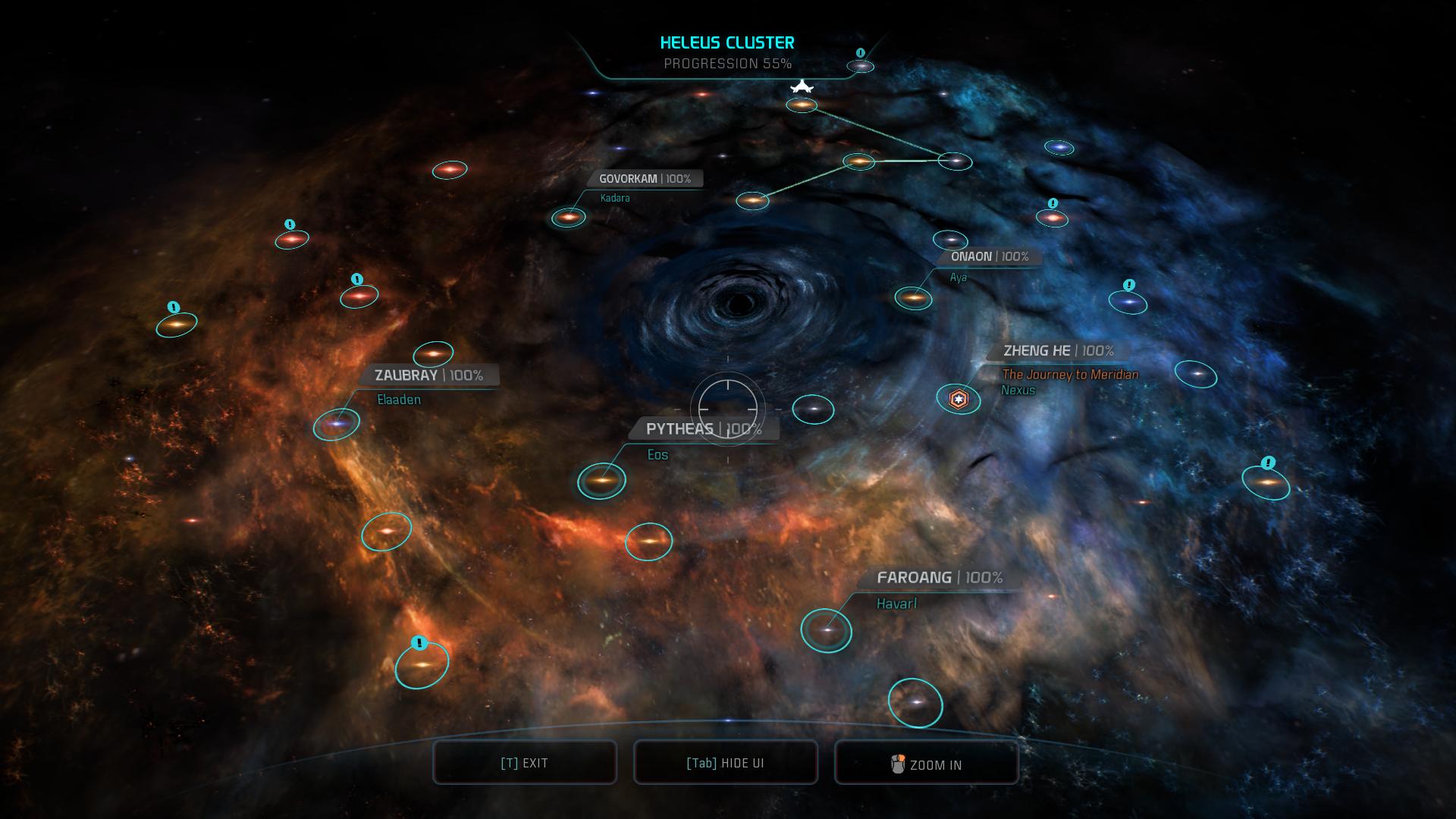 Bioware gave us some very diverse places too. You have hot desert worlds: 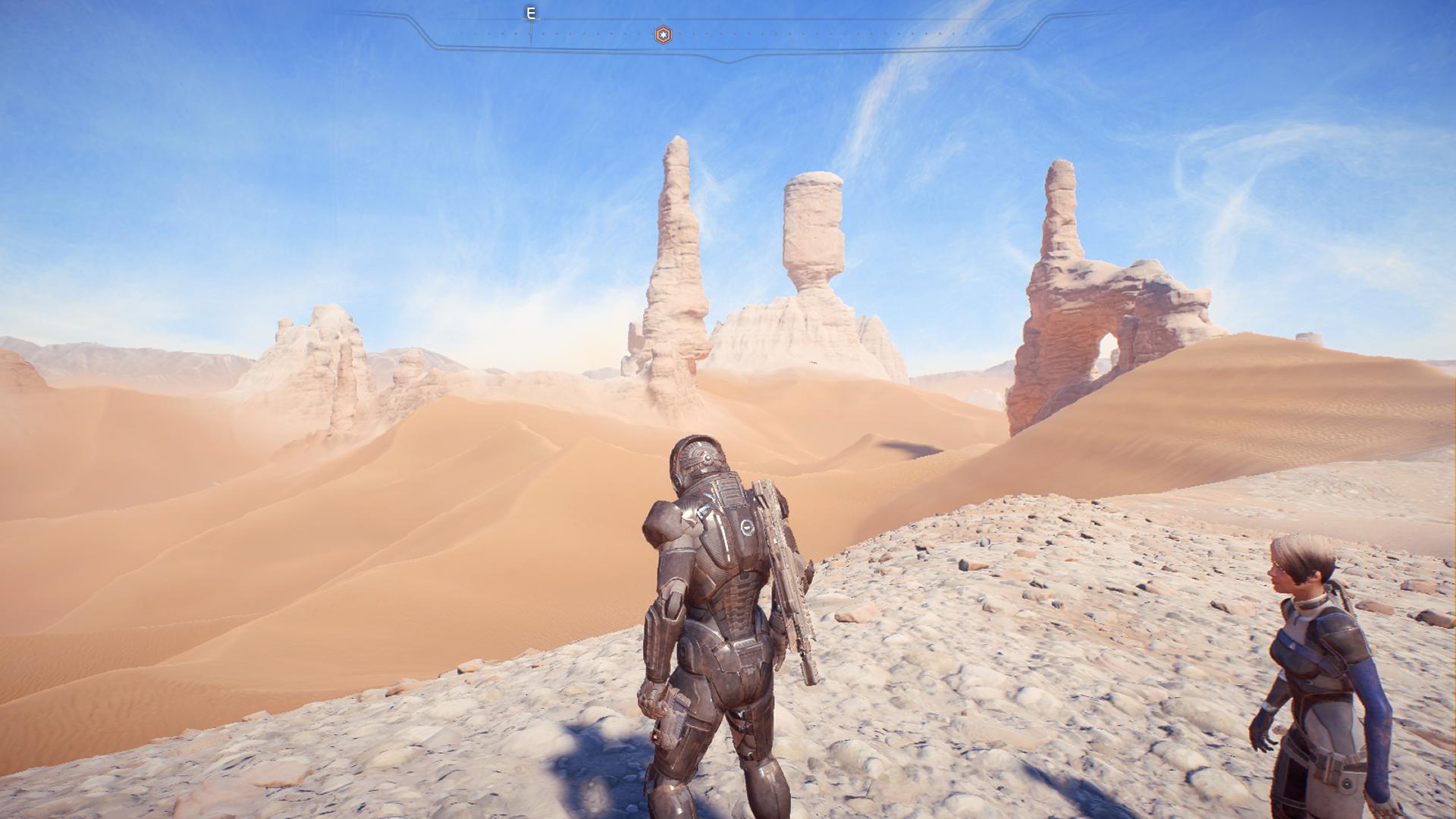 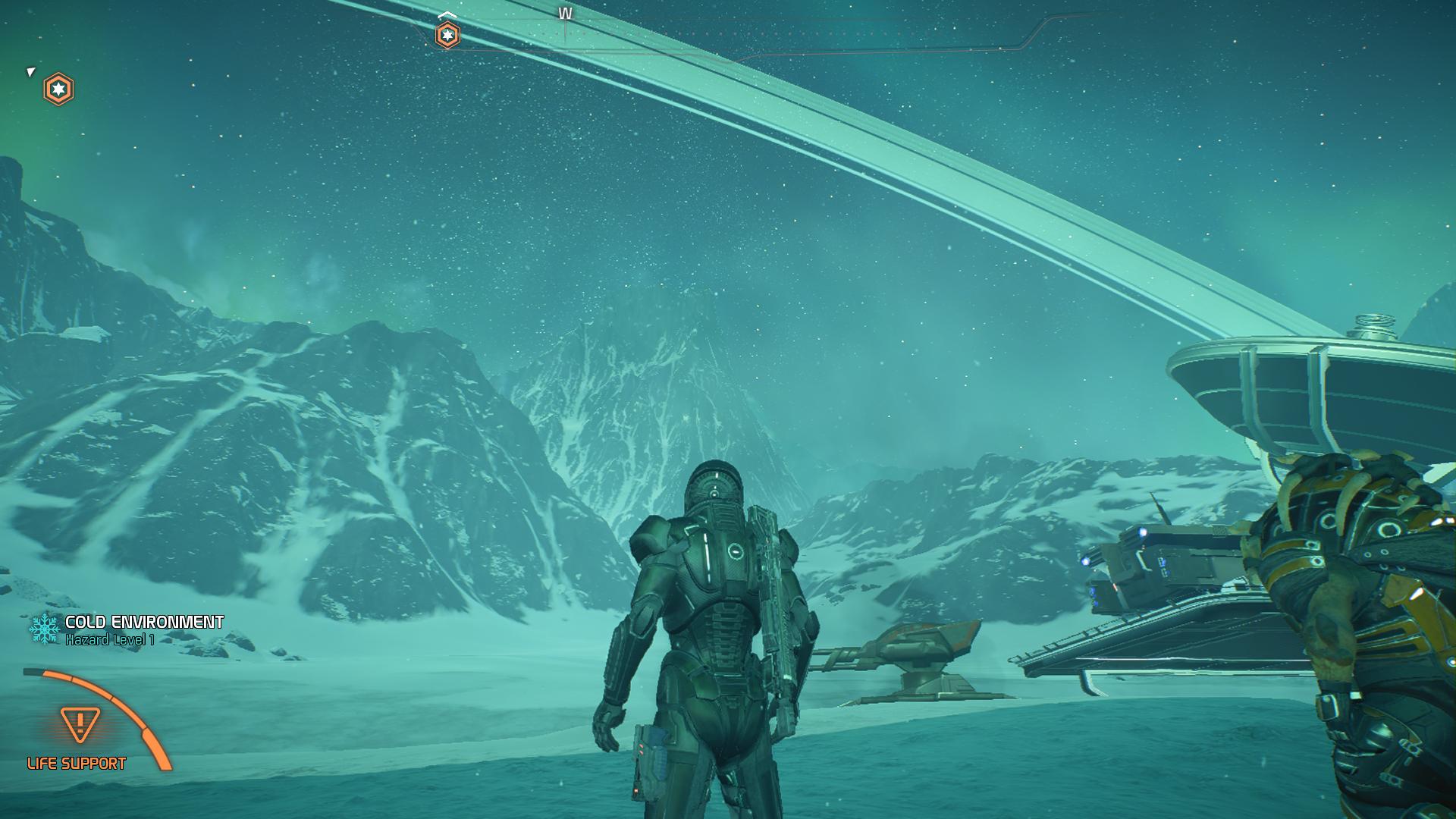 Jungle worlds teaming with life....most of it trying to kill you! 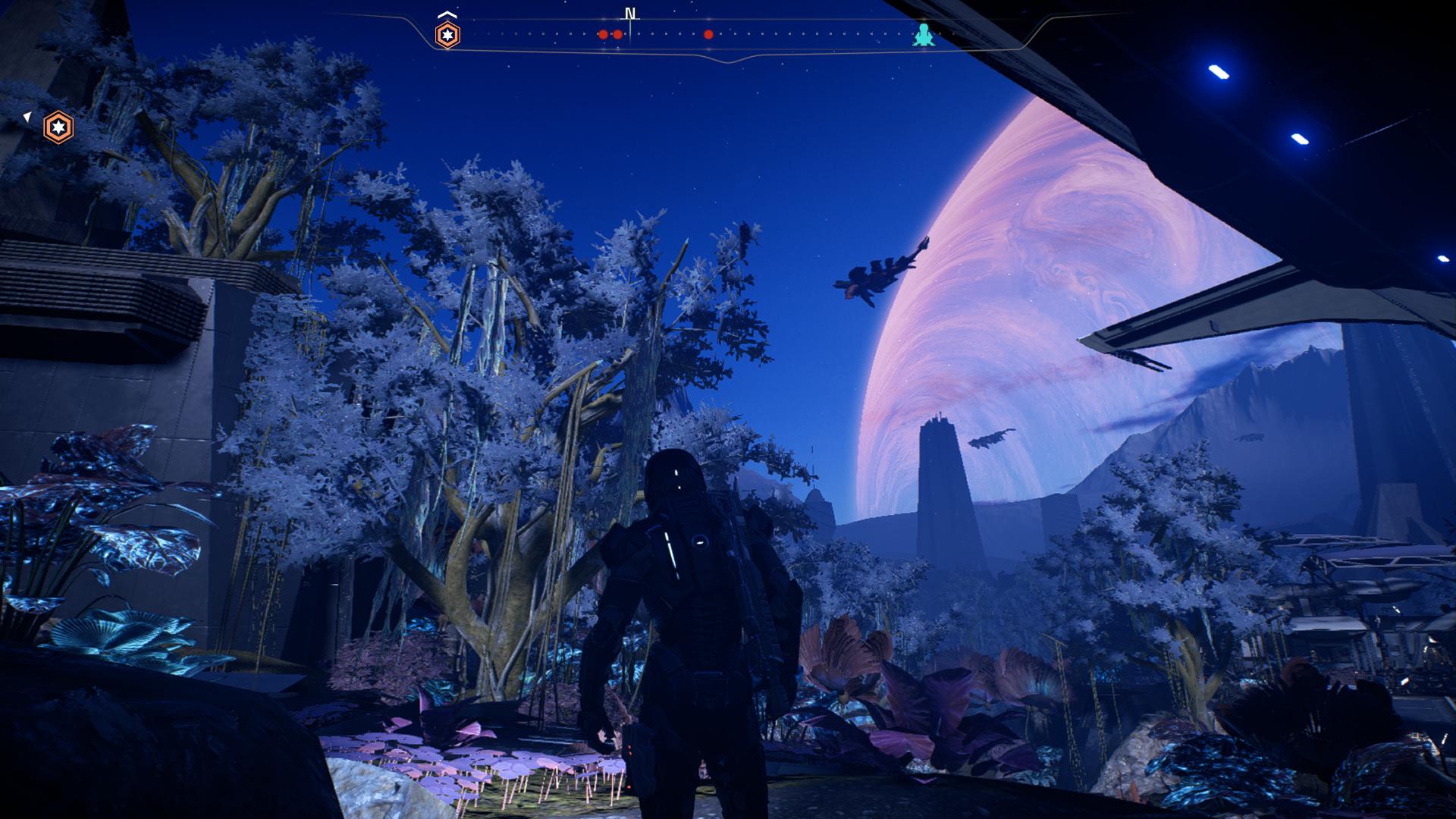 Or even airless worlds (the shattered remains of one) to explore: 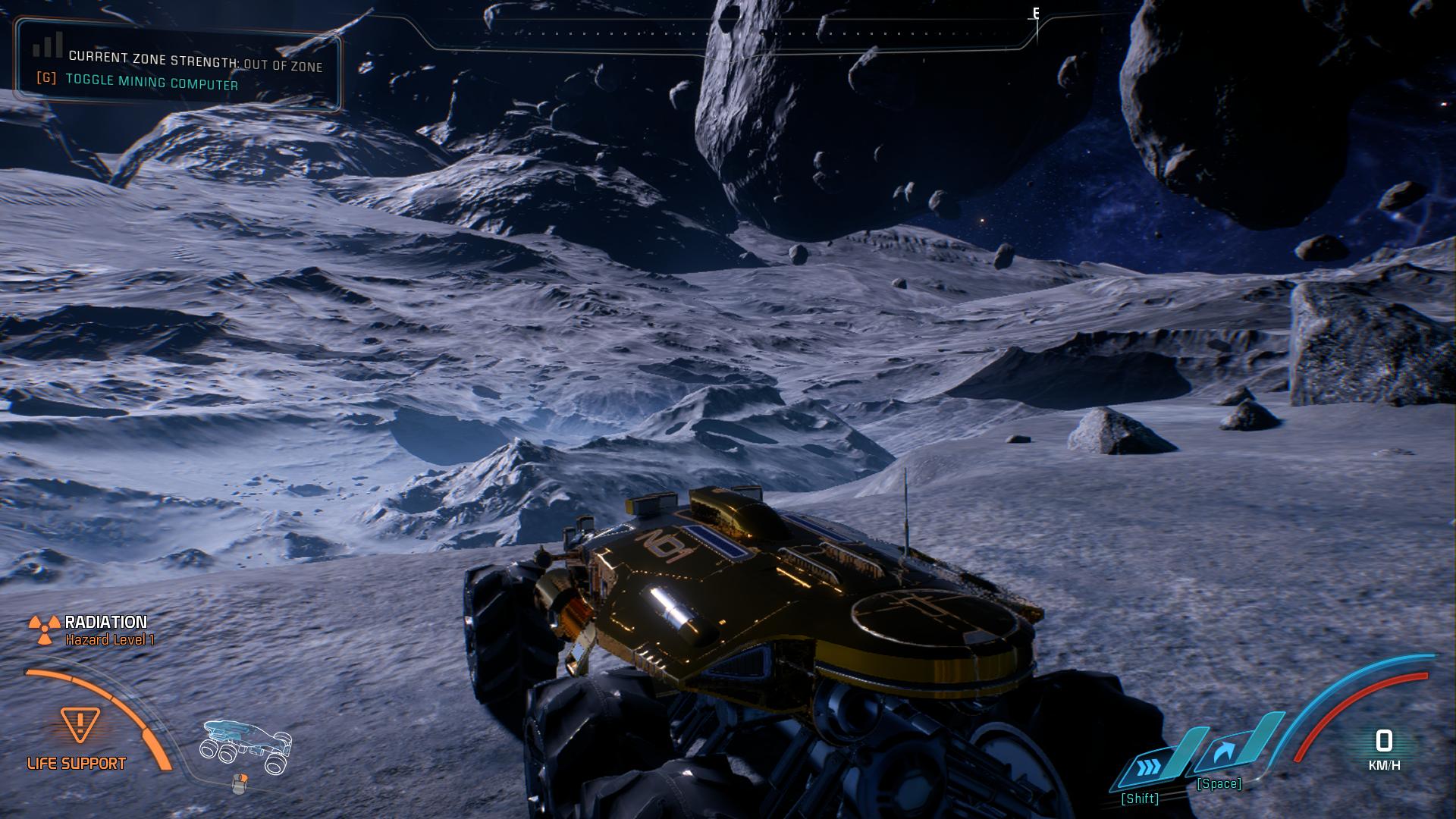 You've not lived until you've driven your Nomad around in a low gravity enviornment like that!

There is no Citadel here in Andromeda, but you do have the Nexus, where your ark ships are pulling in (after you find the ones that have gotten lost): 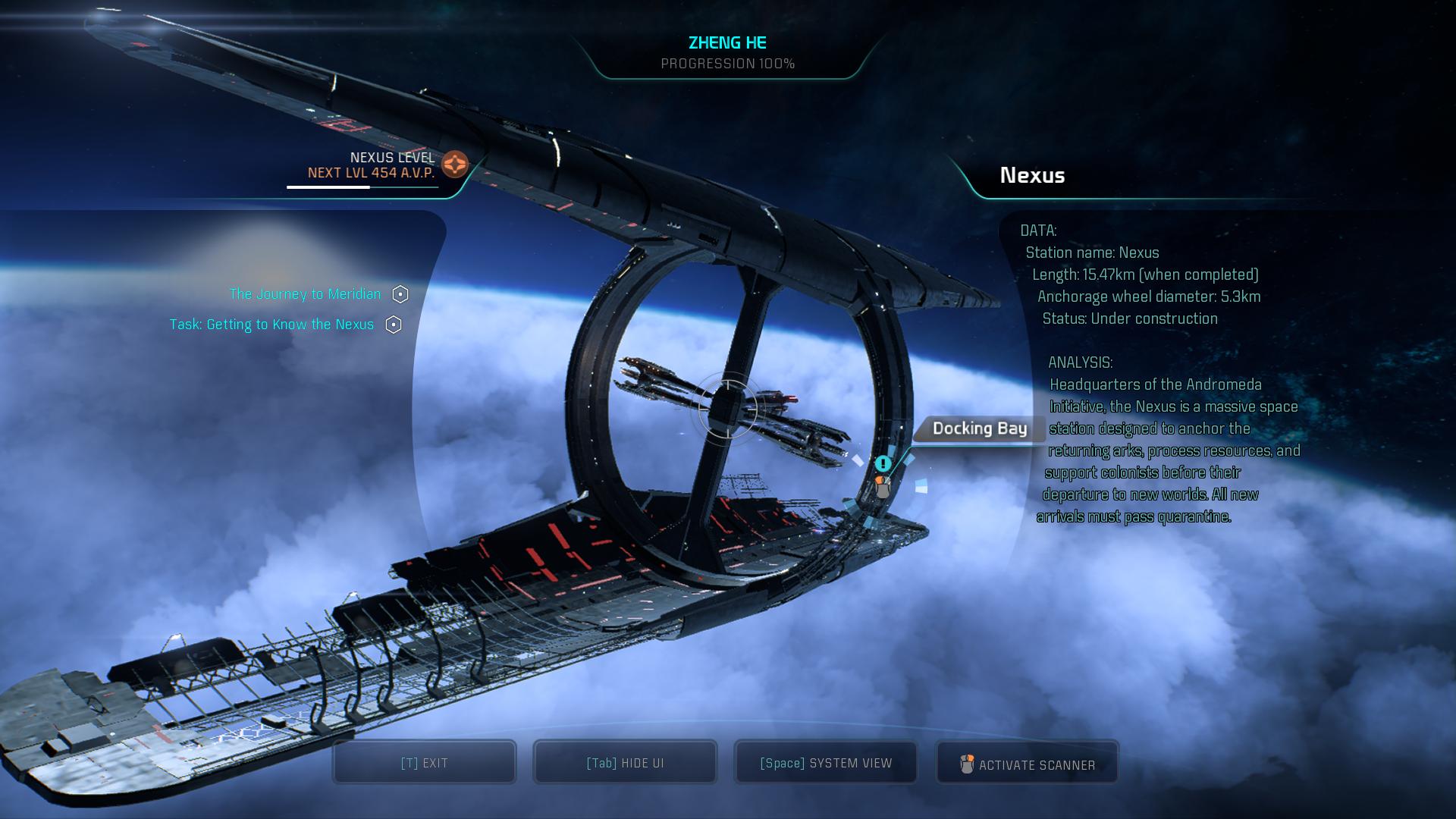 And it does provide that Citadel look and feel to it: 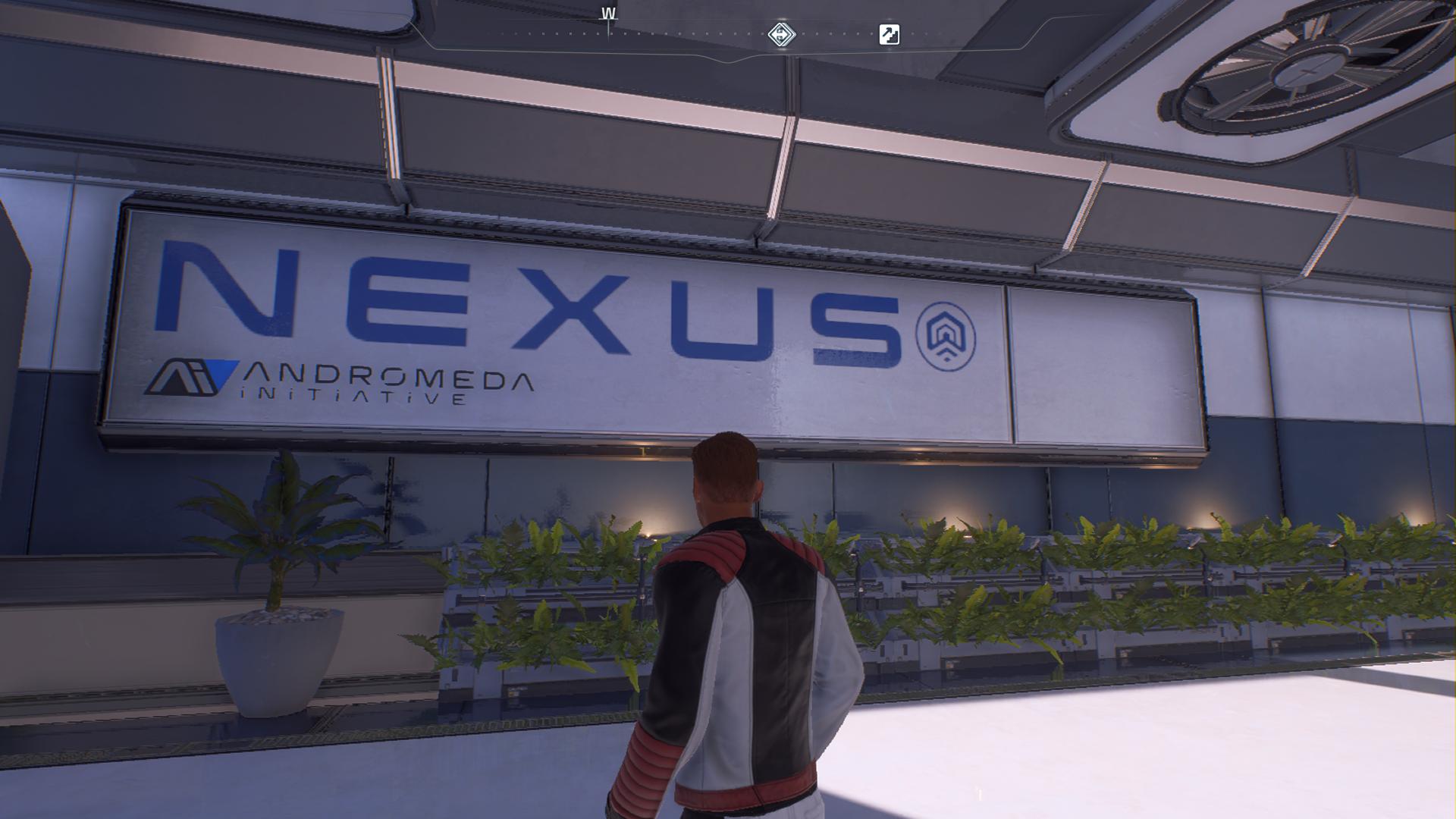 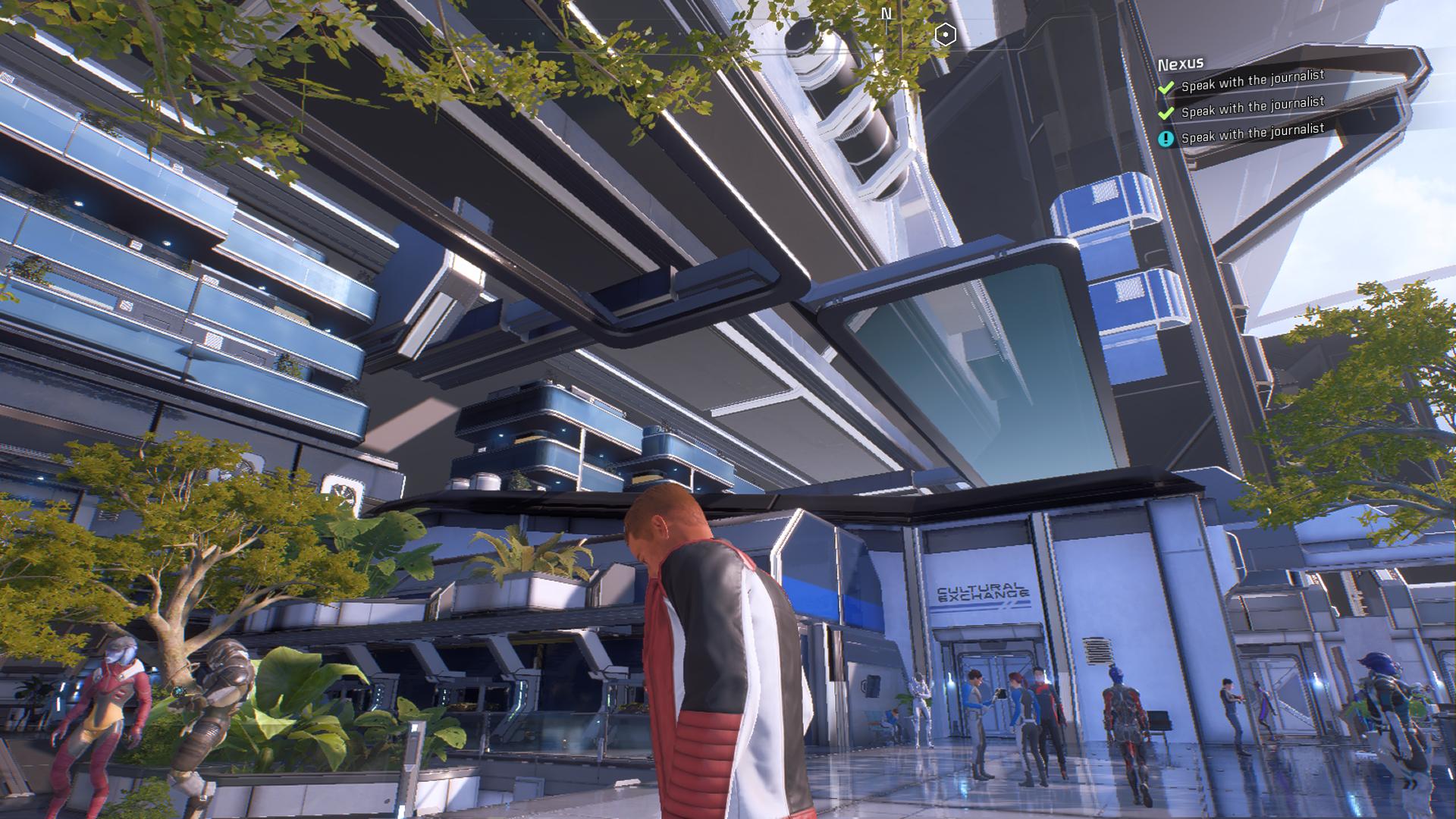 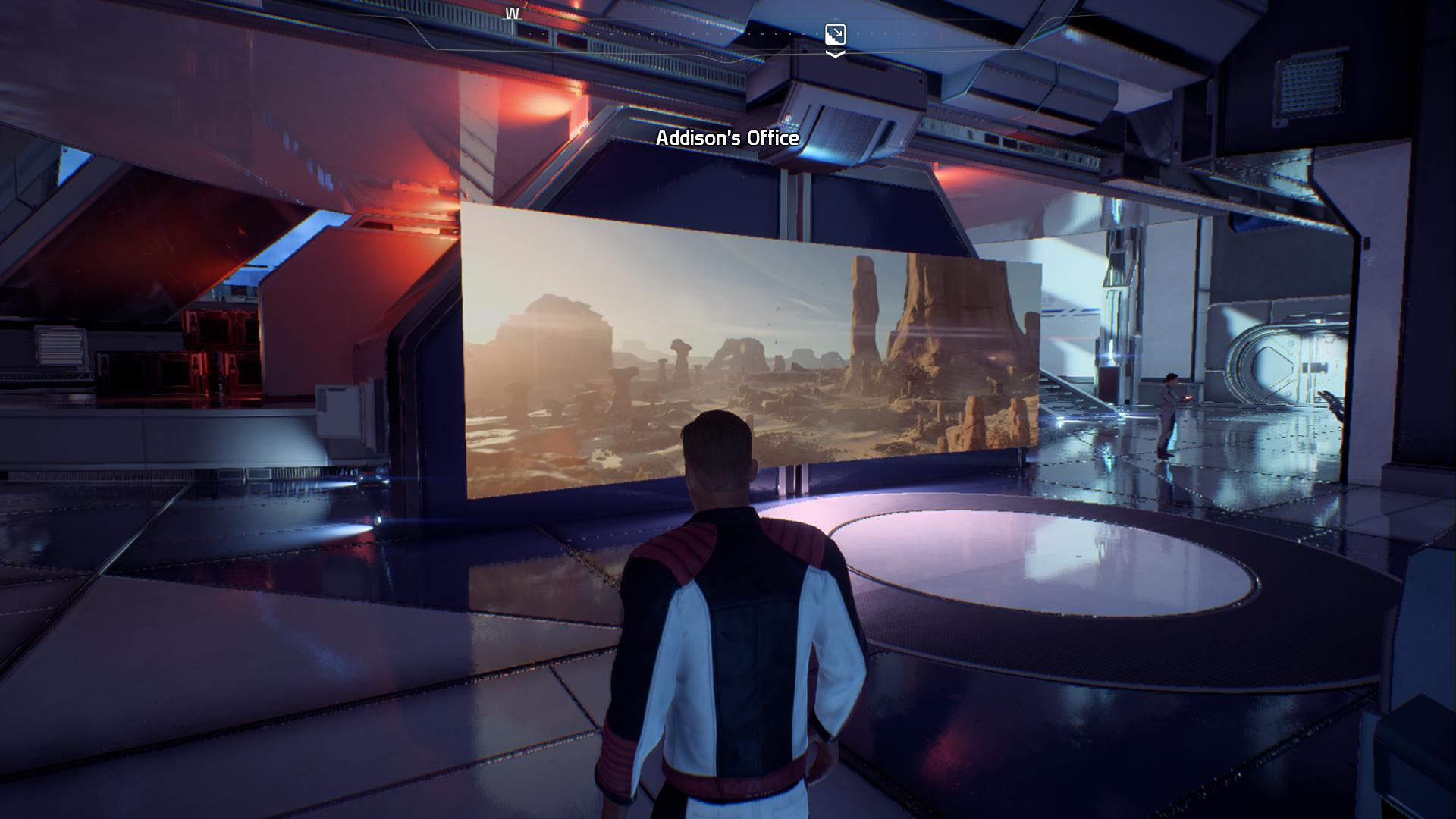 As the Pathfinder for the Humans, you'll be given a ship, the Tempest so that you can do explore, set up outposts, find resources, make friends, fight enemies and many other things to do: 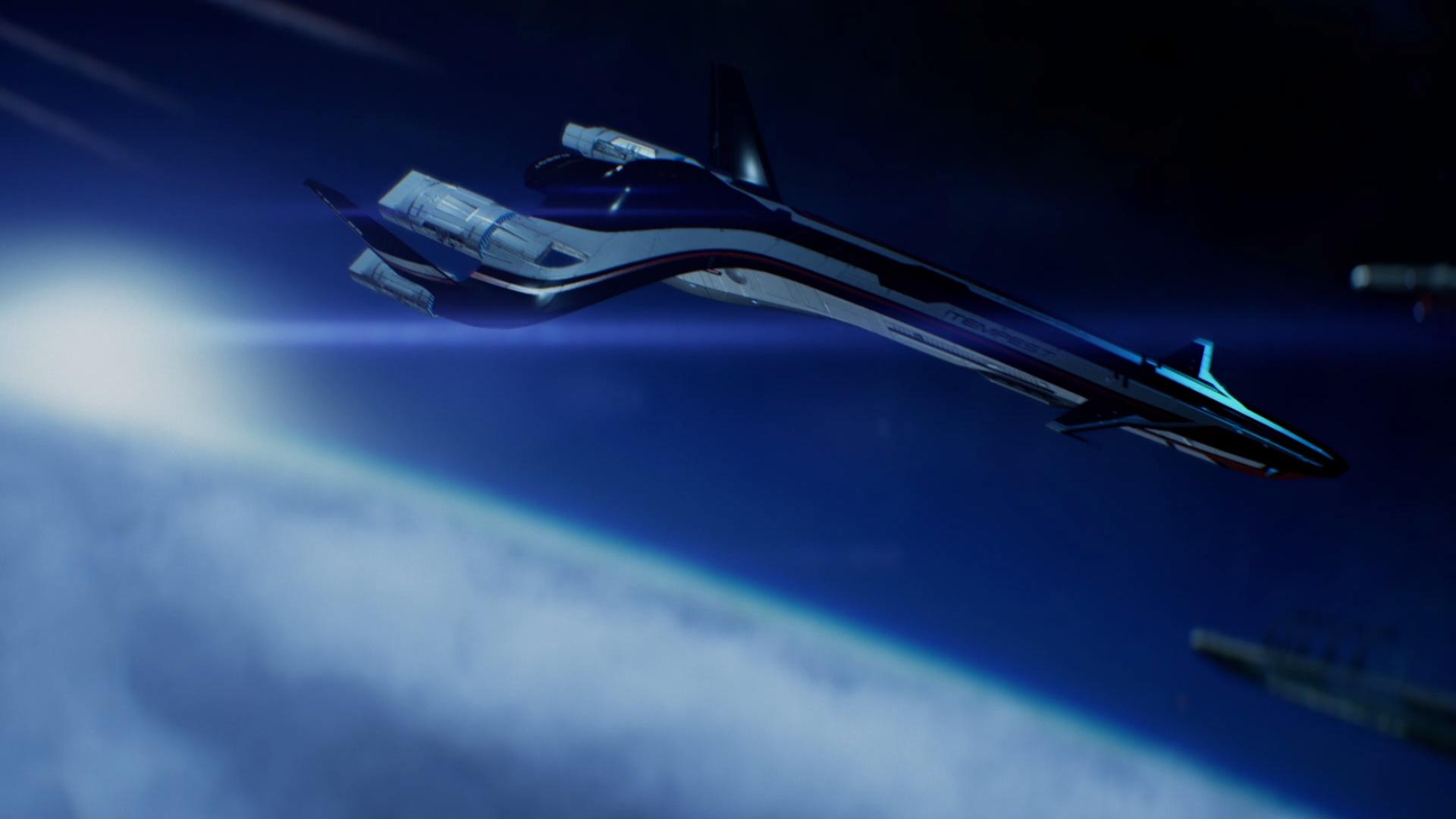 I have to say that I love the Tempest. You've got some pretty cool quarters in it: 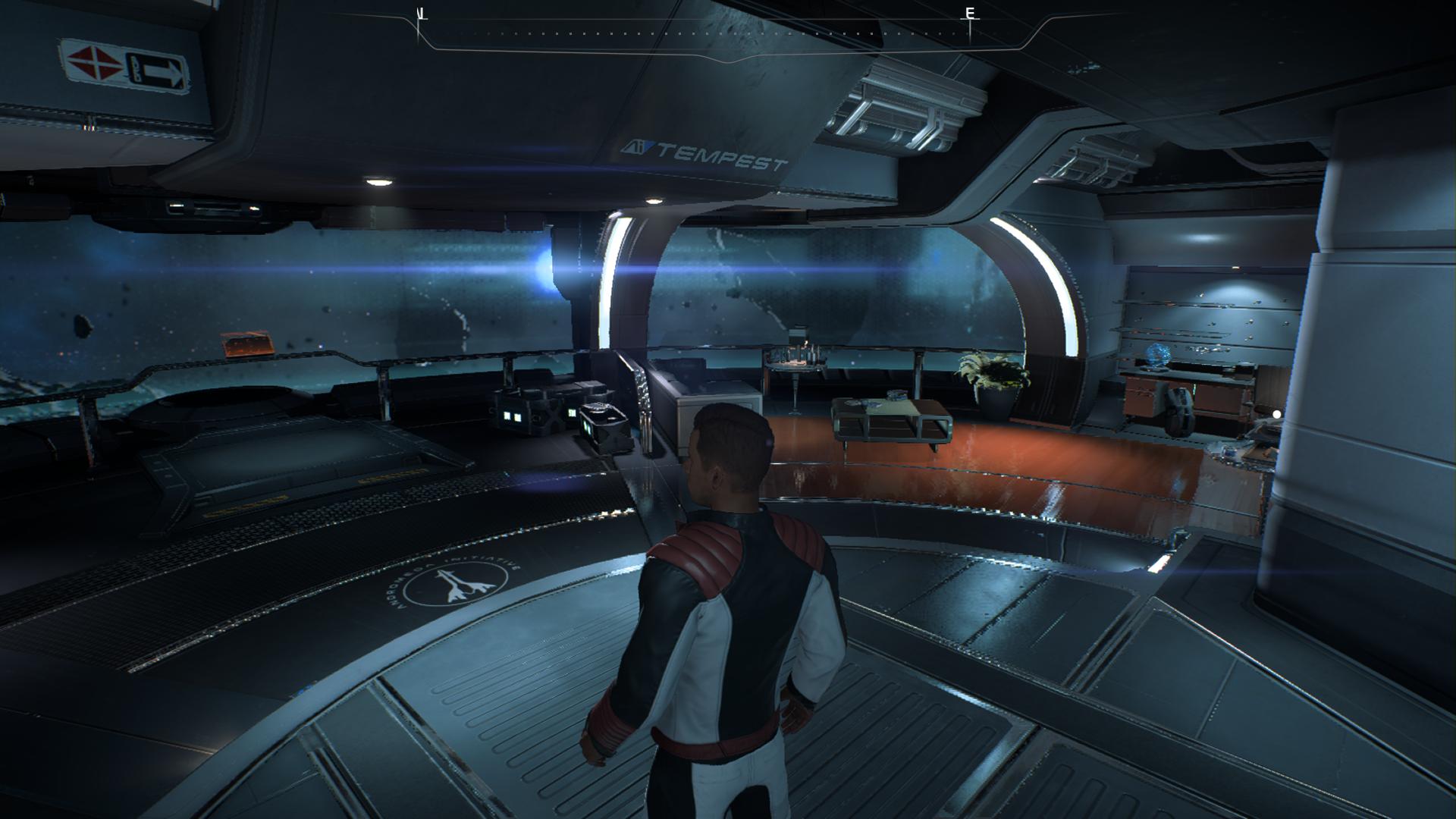 All sorts of places on your ship to explore and things to do from the bridge, right down to the cargo bay where the Nomad is kept: 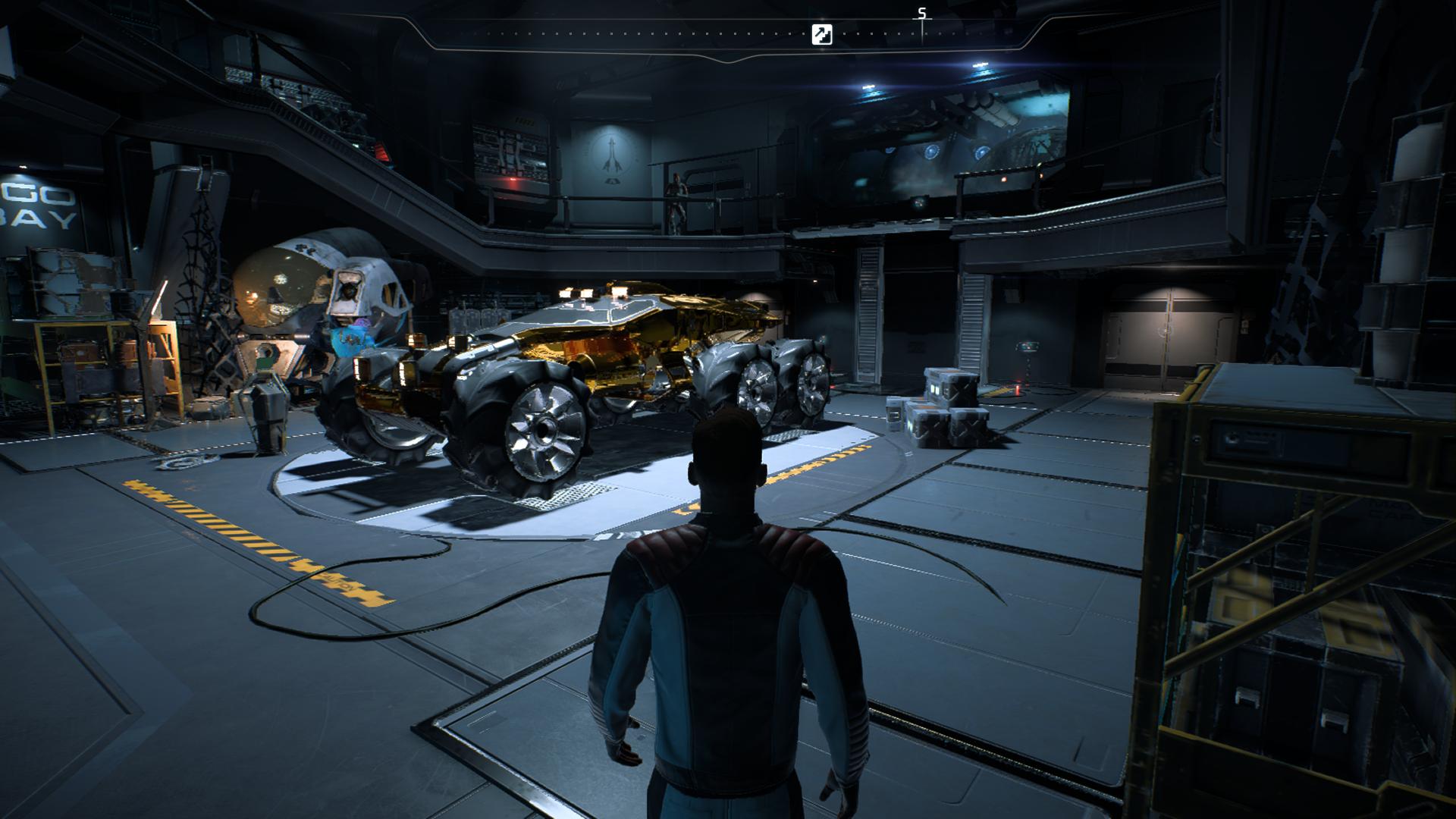 I've not run into too many bugs. At one point I was talking with someone at an outpost, and saw someone laying on their cot sleeping, with half their body sunk in.
At one point, my character, Ryder, when he was talking to people, his voice sounded like he was still in his armor with a helmet on.
And during one mission, a door needed to open up and wouldn't. The game and hung at that point and I had to exit and restart the mission.

All small potatoes and not ruining the game for me. For those whinning about how the characters work: Meh. They characters look just fine to me. If I wanted something that looks real, I'll watch TV or a movie.

Overall, I think if a person goes into this game expecting something brand new, with never seen before places to explore, and learning all about new characters, then you will really enjoy this game.

For those of you that wanted a continuation of Shepard and the Reapers: that story is done. Sorry, but almost all stories have an end, and Shepard's story is over. 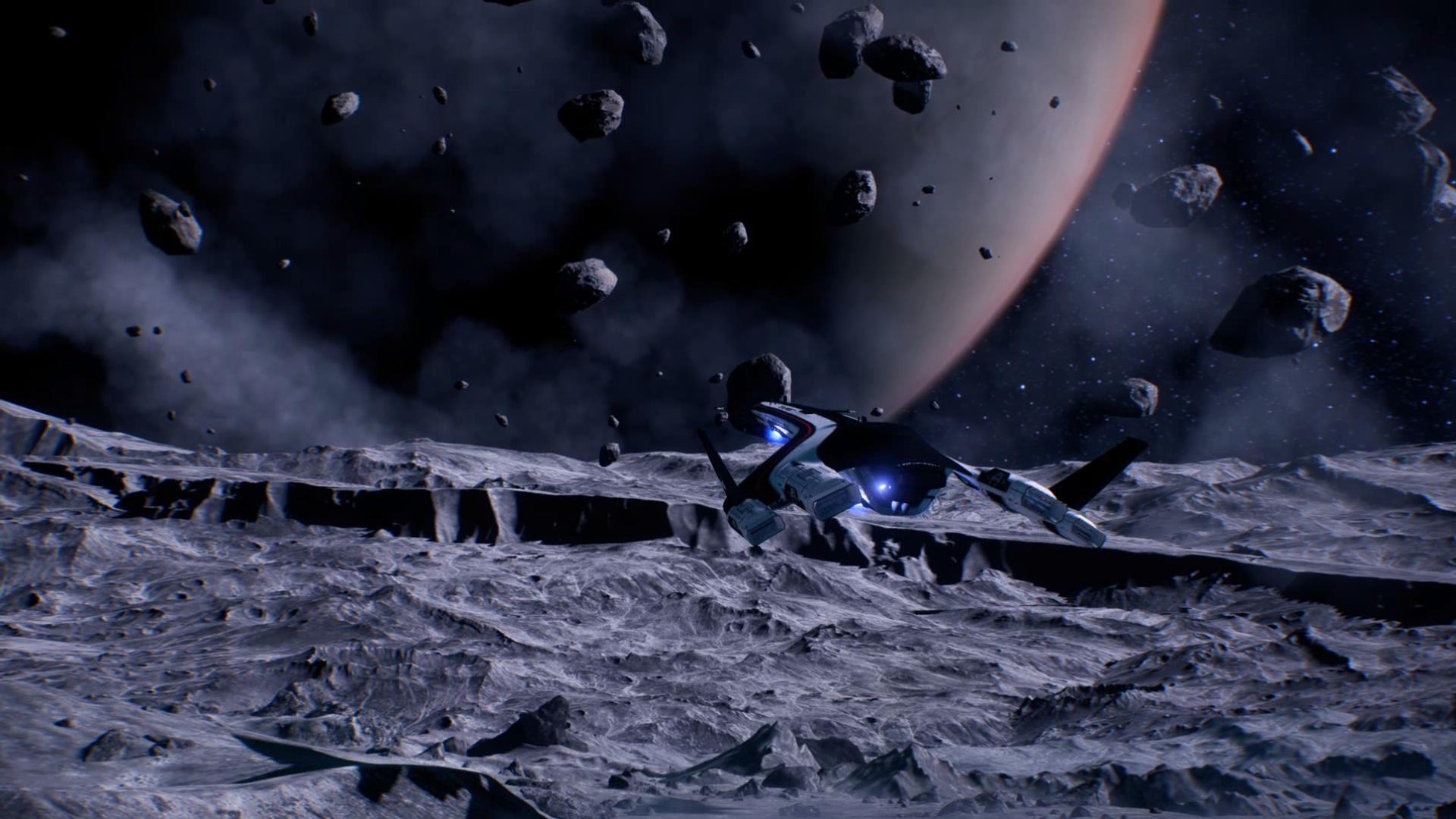 posted on Mar, 27 2017 @ 09:33 AM
link
Thanks for the review! I have NEVER played a Mass Effect game before. Are all of them based on space exploration? If that is the case then damn, I fracking missed out. Some of your screen shots almost remind me of Destiny. I will say that I really enjoyed Destiny and to this day is one of my favorites (it got very tedious for me though and I stopped playing before the last DLC came out). What game does ME compare too? Is it an open world kind of like Far Cry perhaps?

You hit on some of the points in which I heard some give the negative reviews on. Mainly the facial expressions lol. If that is the worst that it gets, i'll take it. I may have to buy this game but first I must continue with Badlands.

I'm not sure if I am going to pick this one up. I enjoyed the first three but I already have at least two 100hr+ games in my backlog (ghost recon and zelda). Maybe this time next year when it's cheaper I will pick it up. Other than that though I enjoyed the thread and the screen shots it really doesn't look as bad graphics wise as everyone is making it out to be. Good luck saving the galaxy though

posted on Mar, 27 2017 @ 09:34 AM
link
I just reached a point where all of my major side quests couldn't be advanced till I advanced the story line a few chapters. Now I've had my eyes opened to how many more places I still have to visit and am even more stoked than I was before

More space travel than space exploration. There's an element of "go here, mine this resource" to them all, but it's more along the lines of "go here, do this mission...and mine stuff along the way."

If you liked Far Cry especially 3, I would suggest Ghost Recon: Wildlands. It is a giant open world it has many environments from jungle, to snow covered mountains and everything in between. It plays like far cry except it's in 3rd person. But there is nothing more satisfying than taking out an outpost undetected with your team of friends or even the A.I.

posted on Mar, 27 2017 @ 09:45 AM
link
So I started playing this just after finishing horizon zero sawn, I have to say next to zero dawn this game feels like a huge step backwards. It's good, I am enjoying it, but it's not what I was hopping for.

Looks good. I guess I could try it while waiting for star citizen.

The games are "Science Fiction, Space Based".

You have exploring you can do. Some puzzles to solve. Stories to read, and it's also a FPS.

This 4th game....I don't know for sure, but I'm thinking that it's more along the lines of some of the Bethesda games like Morrowind, Oblivion, Skyrim, etc. My reasoning for that is while playing, I was something talking about mining, that I would have to wait a certain amount to time for the resources to come back.

That reminded me of the ores you mine in Skyrim, where after a month the ore vanes are full again.

That reminds me, and I forgot to mention it:

There's some new weapons in this game, like the Black Widow, which is a varient of the sniper rifle Widow. Also: in the first ME game, you didn't have ammo, you fired the weapon until it would overheat, and would have to wait for a few seconds before you could fire again.
In the 2nd game, they removed that and went to something called "Thermal Clips" which is like ammo. Both the 3rd game and this 4th game are like that too. BUT! There is a mod you can craft for your weapons that brings back the Overheat thing! My sniper rifle has it, so I don't have to worry about running out of ammo! But the down side is if I fire it too fast, it overheats and I have to wait a few seconds to shoot again.

Pretty cool to be able to do that. Still trying to decide if I like it better than the thermal clips.

What is the name of this mod? I'm not a fan of thermal clips.

posted on Mar, 27 2017 @ 10:15 AM
link
I plan on getting it down the line once they fix the stupid bugs, and more specifically, fix the animation issues.

I love the ME universe..but there is a lot of issues going on with this game...so..on hold for now.

-The graphical output on Consoles is...it's not great I have to be honest. Some of the resolutions are as bad looking as 240p.

-Gameplay is great, they need to nerf some of the damage though. Assault rifles are OP.

Overall, if I ignore the graphical issues and the bad voice acting, a solid 7 out of 10.

It's a augmentation called the "Vintage Heat Sink"

You complain about my N7 Valkyrie and I'll spank ya, tenth. Don't touch it
edit on 27-3-2017 by Shamrock6 because: oops! thought that was weird...lol

As for the facial bug, I haven't really noticed anything glaring. I've seen some odd animations a few times but nothing hugely out of order. And there's been a few times that I felt like the look on the face just didn't match what was happening in the scene.

And I've seen a couple of characters walking funny, like moonwalking almost, except forwards.

Over on the subreddit for ME there's some pictures from people who say they've captured bad animation but I'm not tech savvy enough to know if they're just having a laugh or if they're legit pictures.

Okay, what you mentioned?

I've seen those in every single ME game they have ever put out. It's not always there, and sometimes only happens during certain scenes.

They are also things never fixed by Bioware, so for those who are going to wait for fixes...........you may be waiting forever.

Yea I laughed at all the faux outrage when the developer said they wouldn't be patching it on day one because "that ship has sailed." No idea why people thought that would be a simple fix.

Heyyy thanks for the spoiler warning!