This morning I heard on the radio that our Prime Minister Justin Trudeau has announced that the full legalization of marijuana will take place on July 1st 2018 -Canada's 151st birthday.

This means that it will be regulated with set pricing, however each province can choose if they want to increase the cost. And just like alcohol and tobacco there will be a minimum age requirement for purchase, which will be 18 years old.
The province will also have the right to determine how the sales will take place - I'm picturing something along the lines of the LCBO for sales.
And for the green thumb in the family, Each household will be allowed to grow 4 plants.

Now I'm not sure how I feel about this. I do not smoke the stuff to begin with, but I have done a lot of research on it. As a medication, it apparently can work wonders. My wife's cousin, has a child who experiences seizures every 5 minutes or so. This has caused significant mental set backs for the child. He was put on the waiting list to be a test patient of marijuana pills.
These pills have turned this 6 year old little boy, from someone who needed to be watched over from the second he awoke in the morning, till he was put to bed, into a child now living an almost normal childhood.

He can play outside in the back yard on his own now, does not need to be under the watchful eye of his very stressed out mother 24/7. He's even started attending a special needs school.
It would seem like a miracle to anyone who would have seen his condition previously verses his independence now.
So for instances like this, I see MJ being a very beneficial medicinal drug.

But what about for recreational use? Are we going to see a sudden influx in harder drugs being sold on the streets?
Mary Jane is one of the most popular street drugs for dealers.
What are they going to do once it becomes fully legalized, and available is stores?
I have a feeling they will begin pushing hard drugs to make up for the loss of MJ.
Because God forbid they get an actual job and become a member of society.
That would be unheard of!

Another thing I was thinking about is, the laws in place for your blood/ alcohol to be at a certain level to determine intoxication. How will they do this for Marijuana?

Sure there are levels that can be used as guide lines in a urinalysis. But even those do not determine if the user is actually impaired. Some people have high tolerance to the drug from years of use. One joint to them is not going to provide the same effect, one joint will have on a new recreational user.

There are a lot of different avenues that the government can take in making marijuana legal, and I think it will be a trial and error for the first year or two.

Do I agree with it?

For recreational use, to be sold in stores....right now, no I do not.

There are too many questions that don't have answers as of yet.
I just really hope they go about this in a safe and correct way, for the user and the people around them.

originally posted by: Macenroe82
What are your thoughts ATS?

Adults should be able to purchase and use marijuana if they so choose. Prohibition does not work and only encourages criminal propagation to satisfy demand.

Good, educate the populace and allow law enforcement to concentrate on other crimes. The prison system can take a breath as well.

I do agree to some extent. But maybe it's because of the high substance abuse problems in my city that have me on the fence....or I just don't know how to have a good time anymore lol.

but saying that, I also know marijuana is not to blame for this behaviour.
It's the lack of mental health facilities here that has allowed substance abuse issues to get out of control.

That is true, Thenlegal system will free up some space with this move.

I am under the impression that all the 'gateway drug' allegations have been disproved regarding smoking the reefer.

I fully agree with that.
Also, I don't think we will see a huge amount of people suddenly starting to smoke weed just because it's legal. The people that have been doing it, will continue to...legally now.

I saw Reefer Madness in school and, just like when Officer Friendly came in with his drug board and their effects, I wanted to try everything, just because.

The general pop culture of lighting flower on fire is not one of them.

I still think I should have the right to consume it and I do though.

Oh good Canadians everywhere can chill and smoke dube after dube without worrying about the reefer madness freaks getting in their way!
edit on 27-3-2017 by Neith because: dube

Lol. I was the same way...and did, but never fully appreciated MJ.
everything else though, was fair game.

Yup, thats for sure

originally posted by: AugustusMasonicus
a reply to: Macenroe82
I am under the impression that all the 'gateway drug' allegations have been disproved regarding smoking the reefer.


No way, it's definitely a gateway drug.

Legalisation will stop it from being a gateway drug however.

If this were true wouldn't everyone who uses MJ be on to hard stuff? 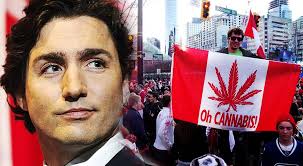 originally posted by: Krahzeef_Ukhar
No way, it's definitely a gateway drug.