So AIPAC was having its annual policy conference Sunday when a bunch of JDL hooligans took some cheap shots to chanting peaceful protestors. Protestors were against such things as apartheid in Israel to the latest fads like hating on Donald Trump. I agree with most things they protest, except for Trump. I vehemently disagree with some of their anti Trump stuff. But ending Israel settlement and solving the two state crisis are positive steps forward.


The Times of Israel
Several hundred protesters coordinated by IfNotNow, a Jewish anti-establishment group, spent hours dancing and chanting outside AIPAC’s annual policy conference Sunday.
Protesters bore a banner saying, “Jews won’t be free until Palestinians are, reject AIPAC, reject occupation.” A dozen protesters carrying flags of the Jewish Defense League occasionally clashed with the left-wing demonstrators in at-times-violent altercations, prompting police intervention. AIPAC has drawn 18,000 activists to its policy conference this year, the largest ever. The theme is bipartisan support for Israel, and speakers include Vice President Mike Pence and both parties’ congressional leaders.


Likewise, its hard not to like some of the positions of the JDL, such as: Stand against domestic terrorists and separatists creating division and instability. I mean as an American, how could one not have that position by default!? I give the jdl points for that regardless of their general supremacist views and violent practices. Id probably hang out with some of them and play some darts or billiards.
Here are some highlights.

As far as the conference itself, the general session and mike Pence Keynote speech are also available with interviews with other world leaders as well. This event seems pretty well covered by media, just not the usual media. The only official ones of note were Russian and Israeli. Perhaps there were some other foreign media reps as well. Maybe some independent domestic reporting?? I can't really tell. Its got another day to go, so lets hope the Radical extremist Jews do not get carried away. They seemed overall well behaved except when confronted or berated by others. Im thinking nobody will bother them Monday and everyone will get along fine.

Its all good Blair got to give his humanitarian soundbytes


*** The former Prime Minister of the UK is earning an estimated �5 million per year from private business ventures connected to his role in the illegal wars in the Middle East -- particularly the invasion and conquest of Iraq and Afghanistan. The huge personal fortune which he now enjoys is his reward for years of service to American's imperial strategy, and to Israel through major progress in advancing the Zionist cause. It's a bounty of corruption, war crimes and murder. *** Gulf-trotting Tony Blair cashes in on his war contacts TONY BLAIR has been cashing in on his contacts from the Iraq conflict and his role as Middle East peace envoy for a private business venture expected to earn him more than �5m a year. The former prime minister has sold his political and economic expertise to two countries, Kuwait and the United Arab Emirates, via his fledgling private consultancy. He also represents the investment bank JP Morgan in the region. Blair has been working pro bono in the Middle East as a peace envoy while amassing a fortune from the American lecture circuit. By offering himself to the Arab states as a statesman for hire, he could comfortably double his annual earnings. His consultancy, the London-based Tony Blair Associates (TBA), emulates the New York partnership Kissinger Associates, which was founded by Henry Kissinger, the former national security adviser to President Nixon. One friend of Blair said: �TBA has been set up to make money from foreign governments and major companies. There�s a focus on the Middle East, because that�s where the money is.�

Great isnt it, pricks like him make money from war and human misery and the rest of us have suck it up and deal with the fallout . Mass migration from the middle east as one example of many.

So true...and they're still making money when they should be in gaol for crimes against humanity

posted on Mar, 27 2017 @ 08:25 AM
link
Just an observation, why are so many leftist freaks? Guys in makeup and leather, women who look like Guys? Unwashed hippie trow backs?? I'm just curious, no I know not all are like that. But it sure seems a lot are?
Take all that funding to the Middle East and cut it off, let them sort it out over there. We could sure use the funds in the black community.

posted on Mar, 27 2017 @ 08:40 AM
link
The guys with the black and yellow logos are are part of the illegal Kach movement.
They don't have the guts to show up in Israel.
Of course they would be arrested on sight if they did.
I had a lot of first hand experience dealing with some of them.


This is another one of those confusing threads where people don't know the sheep from the goats. 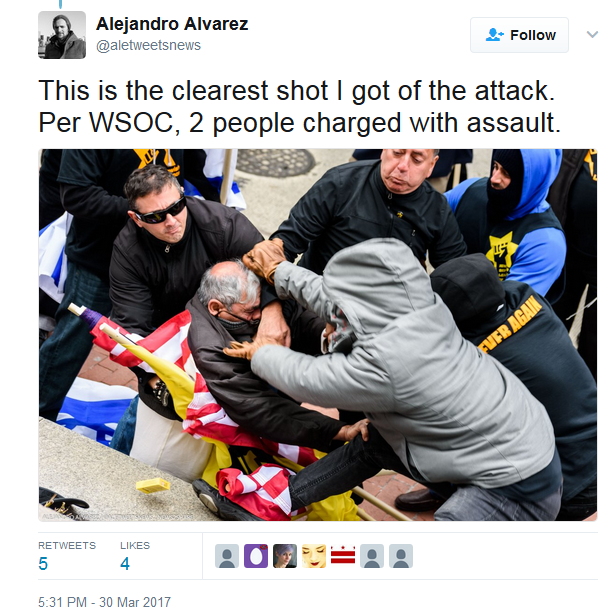 So two of the Jewish Violent Extremists may actually be charged with a hate crime, although I seriously doubt it and hey will likely walk away with no convictions of any kind.

Two Jewish Defense League (JDL) members who beat a 55-year-old Palestinian-American teacher outside an AIPAC meeting in Washington DC last weekend may be charged with an additional hate crime felony.

Kamal Nayfeh was visiting his daughter in Washington DC and accompanied her to a demonstration outside the annual American Israel Public Affairs Committee (AIPAC) meeting. He was attacked by a group of JDL members wielding flags on poles.
“All what I was thinking is, ‘Is this happening to me? Oh my God, I can’t believe it,” Kamal Nayfeh told WSOCTV. “I feel hits from everywhere, and I fell down and I can feel the kicks everywhere on my body.”

The two men, Yosef Steynovitz from Ontario and Rami Lubranicki of New Jersey, are members of the JDL – a group the FBI considers a “right-wing terrorist group.”

The pair were arrested and charged with felony assault with significant bodily injury, and a simple assault misdemeanor.

The state police report on the attack listed “suspected hate crime” based on “anti-Arab” under the “other felony involved” section, JTA reported. Hate crimes automatically increase penalties when added to a conviction.

Certainly nothing will come of this. Israel will do its usual meddling in US affairs and they will quietly walk free or be imported to Israel where they can legally carry out acts of terrorism inside illegal settlements no doubt. Damn radical extreme fascists.