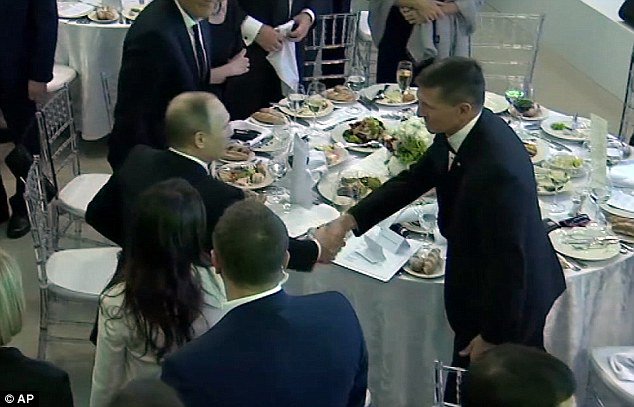 This is firmly in the domain of speculation and rumor at this point but it's a hypothesis that does seem to fit what can be observed of the recent #RussiaGate developments well.

A number of individuals who are almost certainly at the heart of the FBI's investigation (and anyone else who many be investigating) of possible collusion between the Trump campaign and the Russian government have agreed to speak to House investigators.

If you've not yet heard, that list numbers three and includes Paul Manafort, Carter Page and Roger Stone.

While the exact nature of what they'll agree to has not been detailed in anything I've read/seen/heard — will they answer questions in a open hearing or behind closed doors for instance — what some are finding most intriguing is the conspicuous absence of Michael Flynn's name from that list. And that absence has some folks wondering if the silence from Flynn isn't an indication that maybe Flynn has cut himself and deal with the FBI.

A few individuals in the last few days have been prominent in advancing the hypothesis in the media and social networking but that number is growing.

First up we have Harvard Prof, nat sec pro and CNN national security analyst Juliette Kayyem who is indicating that she has sources substantiating the speculation: 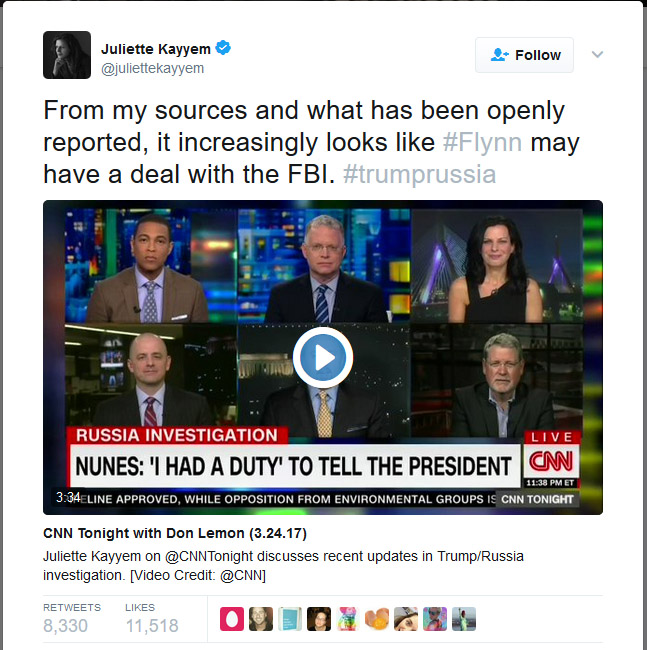 Then there is terrorism & couterintelligence pro, frequent media security commentator and NY Times bestselling author of The Plot to Hack America: How Putin’s Cyberspies and WikiLeaks Tried to Steal the 2016 Election, Malcom Nance, who believes that that the recent revelation (as broken by WSJ) about Flynn have or will force him to cut a deal.

If you're not familiar with what WSJ reported (it's behind a pay wall so I won't link but more here), ex-CIA Directory Woolsey claims that in a September meeting attended by Flynn and high level Turkish officials, Flynn discussed the possibility of what boils down to a dead of the night kidnapping and transfer to Turkey of Turkish cleric and exile (since 1999), Fethullah Gulen, who many believe was behind the recent attempted coup.

The following were linked by another ATS member in one of recent threads: 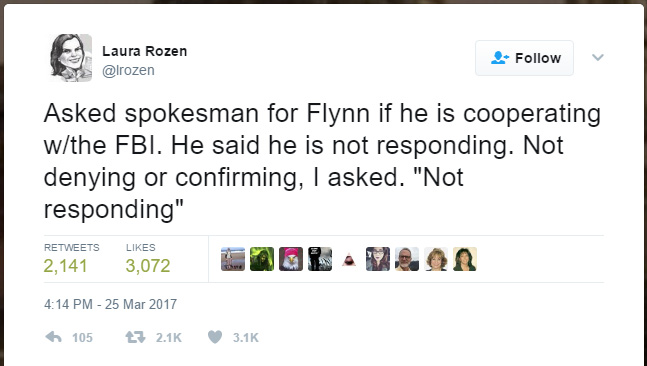 Finally, there's a point-by-point breakdown in a thread of tweets by University of NH professor and Huffington Post columnist, Seth Abramson.

Should anything be read into Flynn's public silence as other parties are agreeing to testify? (side note: speaking of silence, where's loudmouth Giuliani all of a sudden?) Is Flynn just playing it close to the vest or has he indeed cut some sort of deal? If the latter, what would be his bargaining chip to merit a deal? Whose a bigger fish than Flynn? As Abramson tweeted (link above):

(3) Michael Flynn was the National Security Adviser for the President of the United States. The only _bigger_ target is Donald J. Trump.

Whether Flynn has flipped or not, it seems certain that we're in for another eventful week.
edit on 2017-3-26 by theantediluvian because: (no reason given)

Already failed? Was there something definitive that has come out that rules out the possibility of Flynn flipping?

As far as the Mud Pit thread goes, I didn't see it but as I understand it, this wouldn't be considered a dupe. I do appreciate your unrelenting efforts to shut me up though! Lmao.

posted on Mar, 26 2017 @ 05:49 PM
link
With all the tangents and attempts to take the Heat off the last Administration, I don't know what to believe anymore.

There are private investigators looking into Trump deals all the time. If Trump does have such deals in Russia, then why has no one leaked it or reported it?

I'm begging the question, so what if he does have deals when every POTUS since at least Bush have been on foreign interest payrolls, have had business that war profiteered, etc?

Why so obsessed with this one specific nation all the sudden?

Consider China, all across the Middle East, across Europe, hell even Canada and Mexico.

Why is Russia off limits if nobody else including actual Communists are?

Profit is my guess. There is practically 0 trade between Russia and the US. There is huge huge between China and the US, even though it is bad trade for the US losing hundreds of billions annually. My guess is China is the good guy because multinational corporations benefit from cheap labor. Heck, workers in China are paid practically slave wages. You can't do that in the US unless illegals. Russians would never work for slave wages despite it's much closer to ship between Russia and the US. That's why China is portrayed by the MSM as the good guy and Russia as the bad guy.

posted on Mar, 26 2017 @ 06:16 PM
link
I hope Nunes flipped Comey and he turns against Hillary. That would be beautiful. Comey and the FBI are already in hot water because of the whole surveillance issue. What if this whole russian ties bs was just illustrated by the FBI and CIA and some high profile politicians? The NSA had a lot to say and show for in that regard. CNN advanced the rumour with Flynn to distract the people from looking to close at the whole surveillance fiasco that is still unfolding. Trump already said that the next weeks are going to be very interesting and people still believe he meant his own impeachment and just a reminder you should't count your chickens before they hatched. I hope Obamas inner circle is going to go up in flames after this week. Twitter would implode and i bask in the glory of a meltdown of epic proportions.

The investigation is actually into coordination between the campaign and the Russian government. Right?


The investigation is actually into coordination between the campaign and the Russian government. Right?

originally posted by: xuenchen
With all the tangents and attempts to take the Heat off the last Administration, I don't know what to believe anymore.


It behoves you then to recompense the reprehensible recompensible...I have no clue as to how you were triggered though.

Were there claims that surrogates within the Obama Admin coordinated with foreign countries to hack RNC communications and leak them to assist in winning the election? Am I missing something?


Flynn's real corruption was on another issue. After having been fired from the Trump administration, Flynn retroactively filed under the Foreign Agent Registration Act (FARA). His lobbying firm had a contract over $530,000 to work for a company near to the Turkish president Erdogan: In its filing, Mr. Flynn’s firm said its work from August to November “could be construed to have principally benefited the Republic of Turkey.”

The filing said his firm’s fee, $530,000, wasn’t paid by the government but by Inovo BV, a Dutch firm owned by a Turkish businessman, Ekim Alptekin. This lobbying, not the alleged Flynn-Putin relation, is the real scandal and part of the Trump/CIA/Clinton deep-state in-fighting. The meeting Woolsey described was under the "Turkish" Flynn contract. The Turkish business man, and owner of Inovo, Ekim Alptekin is a member of the Erdogan gang. But hidden at the very end of the WSJ story is the real key to understand the shady network: Inovo hired Mr. Flynn on behalf of an Israeli company seeking to export natural gas to Turkey, the filing said, and Mr. Alptekin wanted information on the U.S.-Turkey political climate to advise the gas company about its Turkish investments. It was the Israeli gas company, not the Alptekin outlet, that drove the issue.

Gas From Israel And The Flynn Wiretapping - Behind The Deep-State Infighting Over The Trump Election www.moonofalabama.org...

Was there McCathyist paranoia oozing primarily from one party during the last election?

We had China doing massive hack attacks that year. We've had Saudi money, Israeli money, China money, etc etc etc involved in all levels of government, military, intelligence and private sector for decades now. And they all hack our government.

Hillary snapped her fingers and poof the whole world is obsessed with Russia. No cultists to be found there none at all.

Investigations are typically launched when there's a reasonable suspicion that a crime has been committed.

I haven't been investigated for bank robbery either but if I start buying big ticket items with dye-soaked cash the week after my local bank is robbed and the police decide to question me, I don't think it would make a lot of sense to ask the cops if they've investigated everyone else in town yet.
edit on 2017-3-26 by theantediluvian because: (no reason given)