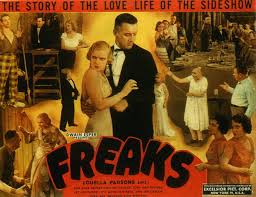 "We'll Make Her One of Us!" from the gibbering mouths of these weird creatures came this frenzied cry... no wonder she cringed in horror... this beautiful woman who dared toy with the love of one of them!

Freaks is a dark and disturbing movie directed by Todd Browning on the heels of his hugely successful version of Dracula starring Bela Legosi. It bombed and was hated by public and censorship boards alike and pretty much ruined Browning's chances at a later career. It seems that the public's main issue with the movie is what they considered its exploitation of real "freaks" (which did happen quite often at the time- circus sideshow freaks were still very much an act people paid to see). In reality, the movie challanged the current assumptions about freaks and asked the question: "Who are the true monsters- the freaks or the "regular" folk who gawk at and exploit the freaks?"
I think the answer to this question was fairly clear by the end of the film.
The movie stars the beautiful Olga Baclanova 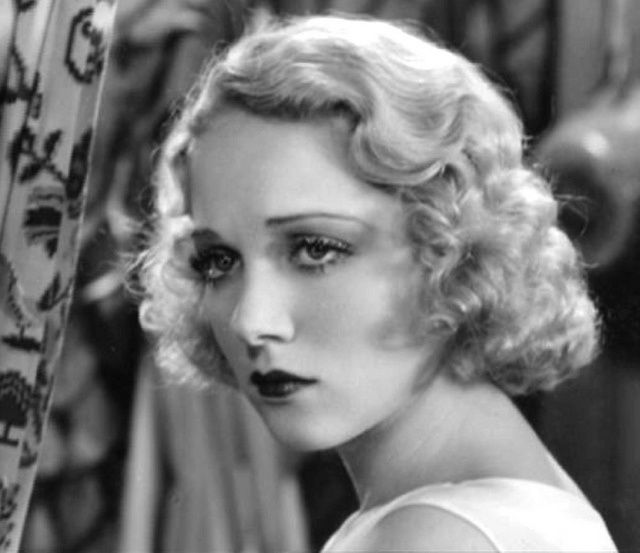 as a cruel trapeze artist who seduces one of the circus freaks (Harry Earles a midget) away from his fiance in hopes of stealing his inheritance. 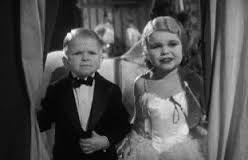 The cast includes many incredible and amazing characters-- the freaks. 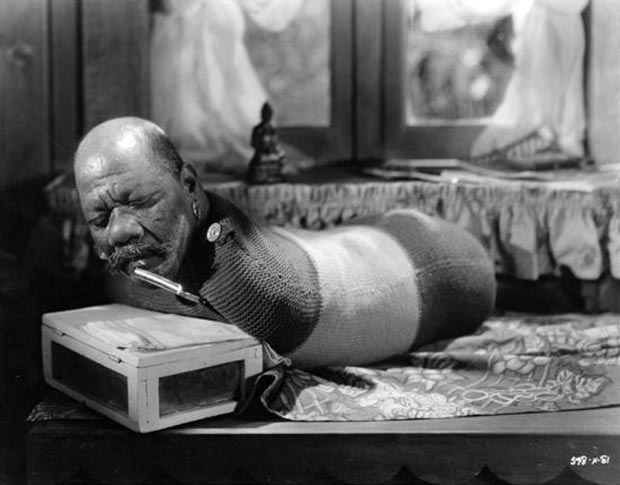 This following scene sums up a lot about the film-- we see Cleopatra (the "normal") reeling in horror at the thought of being "one of them." We see Hans (her new midget husband) frozen in horror at what his fellow freaks look like to his bride. We have Cleopatra's lover mocking her and them.
So.. creepy..

The Ramones were inspired by this scene to write the song Pinhead:

Read here a bit more background on the real life freaks in the film:
www.deathandtaxesmag.com...

And finally, grab the popcorn, turn off the lights and sit back for one of the craziest, most controversial, creepiest films ever made:
(full movie at dailymotion link)
FREAKS!

Seeing some of the cast members there, I can feel confident in assuming that American Horror Story season 4 drew some inspiration from this film.

Agreed, (having never seen an episode but seen many references) that this film definitely seems to be one of the inspirations for that series!

Where can I see the film Freaks? Do they have it on Netflix or will I have to track it down for a download??

AMH used a combination of actual unique humans and special effects on regular folks. In regards to Freaks, was everyone of the Freak members actual unique people, or were some of them also special effects? When see start treating these people like humans and just hear from them, we realize many of them embrace the title and like to incorporate their story for entertainment and education alike. The small lady is not ashamed of how she looks, nor the people with other birth defects. They embrace what they are given and make the best of their life how they see fit.


Most of these humans are very kind and gentle and even humorous people. The state fair rolled through in February, we take the family every year. The same "smallest women in the world" tends to show up every year. Ours is a really tiny Haitian woman who speaks decent English. I have talked with her for the last 3 years we have gone. She is a nice older woman, claims to have had children, and says she enjoys doing the shows. I am hoping she remembers me next year, I always speak to her like a friend I have known for awhile so she can see some people can see the humanity beyond a side show.
edit on 3-26-2017 by worldstarcountry because: (no reason given)

Hey, there's a link at the bottom of my op to dailymotion where the film is available in full
All the actors were playing themselves.. various disablities or differences that had them labeled freaks irl.
That's cool about that lady you met- I hope she remembers you as well! I wonder how many people stop to talk.
I'm glad she likes what she does. I'm sure it's interesting!

Oh sorry, I missed that. I think I will catch it tonight on my tv after Walking dead. Thanks for this little piece of history!

It was fun writing up, no problem! I think you will like it- a classic must-see for a film buff
And, as you said, it is a fascinating piece of history.

Thanks for all that AHS! I've been meaning to check it out.. you've convinced me
edit on 26-3-2017 by zosimov because: (no reason given)

Oh very interesting. You can tell this film has influenced many other films. I will watch this when I have time. Thanks for sharing zosi!

Awesome, knowledge, thanks for reading. Yes, this film seems way ahead of its time and also influential among a certain set of later artists. Let me know what you think!

thanks for introducing me to it...

Thanks for weighing in!
You're right--everyone should see this movie.

Was one of the cult fims in the sixties...you'd get wasted and go to the theatre and watch it with Reefer Madness, Fritz the Cat and Attack of the Killer Tomatos...

And remember....your local traveling circuses all the way through the 90's had "freaks" displayed in tents to gawk at. Most made VERY substantial livings $$$$.

I first saw Freaks in the '80's as a teen, I think it was on the UK Channel 4 channel. I'd read a lot about it and the fact that it's name checked in a David Bowie song also piqued my interest.

I've got mixed feelings about the film. If you take out the obvious unique (at the time) selling point of the film, the story itself is really run of the mill about a love triangle and revenge. I wouldn't pay to go to a freak show - not a pleasant term but it is what it is, yet in a way through watching the film I was.

Hey thank you for a slightly differing and valid perspective.
The way I felt watching for the first time was that the film was 1) an interesting historical artifact 2) holds up a mirror to the audience-- who is the real "freak"? 3) a great view of what happens before/after the freak shows, the every day life of society's outcasts.

But your opinion is just as valid. Thanks for reading and commenting!

Did you happen to click the link about the private lives of the actors? Most of the stories were pretty tragic.

Thanks for your comments.. I didn't know it was one of those 70s cult classics (though I did know it had reached cult status).

Yes... and I've caught the film over and over and in parts since the 60's. To them, they we're low paid but excited to be doing "something".

The more you watch it... the more tragic their expressions seem... and not especially aware of their exploitation as "entertainment ".....

Did you happen to click the link about the private lives of the actors? Most of the stories were pretty tragic, actually.

Thanks for your comments.. I didn't know it was one of those 70s cult classics (though I did know it had reached cult status).

It was a cult classic in the UK in the '70's/'80's, mainly because it had been unavailable for viewing for 30 or so years. The late '70's/early '80's saw some loosening by the British board of censors hence the trend for 'video nasties' in the same period.