List of Celebrities and famous people that believe in FLAT EARTH

So I go and search around to see if there's a list of famous people that are flat earthers. But instead all you find mostly on google is this common theme which is:

2) only a few of them mentioned

I just think that's so suspect. Like ya maybe there's a list out there and if you have one post it or a link to it. I want to see who all believes in flat earth. But I just kinda get the impression that tptb might not want the masses knowing what famous people believe in it. And if they do show some they're all African American and they just pick like a few rap stars who people won't take seriously.

I just think there's strong evidence of flat earth. Prime example. I've seen tons and evidence. But I went on an overseas flight and sure enough they went in the exact direction I thought they would. Not over the ocean. but north. Which if I didn't know about flat earth I'd think would be very strange. Like that would make zero sense. But I thought, no this is exactly the right direction on a flat earth map. I know that's weird but it happened. But again, I can't prove either. Infact I don't know and I dont' even really care too much. But I do tend to think that we most likely are on a flat earth. So one simple way to prove this is there's suppose to be something like 6000 satilities + another 24000 large space debree floating around. So you go on youtube ISS live stream and you'll never see one. Also on any youtube video of space you'll never ever see even 1 satilite. So they magically 1 video appears of the ISS supposedly filming 1 satilite near by. And I'm thinking BS! They had to make that one up cuz people were figureing this out that they should be seeing tons of them on very video and live feed, when "there's zero to be seen". So they make up this 1 video as their proof of it. It's total BS. Anyway again I don't even care, and I could be dead wrong for all I know. But I just think the ball earth is one of the big lies we've been told. One of so so so many.

anyway your thoughts? And or do you know what celebrities believe in flat earth?

The North Star (Polaris), Southern Cross (Crux) and geometry make flat earth impossible.
edit on 2032017 by TerryDon79 because: Added links for those who can't be bothered


I went on an overseas flight and sure enough they went in the exact direction I thought they would. Not over the ocean. but north.... this is exactly the right direction on a flat earth map.

Can you direct us to a "Flat earth map", I'm curious


I don't believe in Flat Earth and don't understand how it has gained such a following... maybe a psyop or just another distraction

posted on Mar, 20 2017 @ 10:10 AM
link
why do you lend any credence to the fact that certain unqualified " celibrities " subscribe to the flat earth delusion ?

do you take heed of celebrity religions beliefs ????

are travoltas and cruises beliefs in scientology correct

what about seagall and budhism ???

or any other celebrity endorcement of a religion // cult ???

posted on Mar, 20 2017 @ 10:10 AM
link
Scre* the celebrities... Let's count the smart people who promote that crap. For my surprise one of the few nice researchers in mystic topics turned positive when examined for Flat Earthism. I'm taking about Santos Bonacci universaltruthschool.com...
He was one really good lecturer until he got that disease... Well I'm not saying he was a big deal but at least he was honest and didn't promised paradise from his mouth. However after he was busted by the government(that's what was the rumor) and went into prison he changed. I don't know if they brainwashed him or he was a shill from the beginning.
This said... Not only celebrities are going nuts... brainy people too. Quite worrying.......
edit on 20-3-2017 by Argentbenign because: xxx

posted on Mar, 20 2017 @ 10:12 AM
link
I would prefer a list of sailors that believe in flat earth to be honest, I would trust someone that makes a living traveling over the round world, I guess there a not many that would say the earth is flat in that group but who knows, there are always crazy people around.

"People can't be talked out of illusions. If a person believes that the earth is flat, you can't talk him out of that, he knows that it's flat. He'll go down to the window and see that its obvious, it looks flat. So the only way to convince him that it isn't is to say, "Well let's go and find the edge".

posted on Mar, 20 2017 @ 10:17 AM
link
Ahhhh yes, the brilliant Shaquille O'Neal. If you would have said magic Johnson that would have kept my interest. But shaq?
No

I don't know how to post images on here really. So here's a link to a flat earth map:

Again don't let your mind confuse you. This is not a "regular map". This is a flat earth map. (it's different) So traveling from the western seaboard of the US to hong kong, where do you go? You go north follow the coast over alaska and then over? why? Because that's a straight line to hong kong. Plus I know this was the way we went because it wasn't just showing on the computer on the plane; you could visably see the coast the whole time.

As you can clearly see the straight path from the eastern seaboard of the US to hong kong is directly over the pacific, not heading north hugging the coast and then over alaska and back down in some strange massive arch.

So I don't know. I know jack. I could be off base. There could be some other rational explanation to this. I'm not saying "I KNOW". I'm saying "I don't know" but I think everything seems to jive with flat earth.

posted on Mar, 20 2017 @ 10:21 AM
link
Only flat earth world map I know of is the super Mario brothers world map- and it has edges that wrap around, implying it's a distorted flat map trying its best to imitate a sphere.

How is it in this day and age people believe in a flat earth? I can't wrap my head around it. You don't even need a plane to see the curve of the earth, climb a tall building and look out over the ocean!
Consider why we have time zones!
This is insanity.

We've got people in space right now looking down at the earth, and then down here we've got every thing from flat earth believers to the FSM people.
No wonder we're doomed.

posted on Mar, 20 2017 @ 10:22 AM
link
Here this fallacious subject rears its ugly head again
Propagated by folks that have 0% (or negative) understanding of science in any form
I wish they would gain some form of education in a field of science . Just the smallest bit.
But I digress as I find the entire belief humorous beyond even the best comical movie.Beyond belief
Helps keep me ":entertained"

but I think everything seems to jive with flat earth.

You mean apart from the North Star, Southern Cross and geometry? (And a million other things)

But just ignore those, right?

posted on Mar, 20 2017 @ 10:25 AM
link
If you look at Flat Earth stuff on YouTube - I have because they make me laugh - you will see some of the most brain dead cretins coming out with all sorts of nonsense. The ones about the ISS (and satellites, and space etc) being "fake" are generally a hoot, but at the same time it makes me sad (and a bit worried) that there are people out there who are just that stupid.

I cant wait to see this upcoming season of Celebrity Real World, with them eating pizza's and Ritz Crackers all day while fighting over the in's and out's of the entire canon of lunatic Flat Earther ethos.

Links copy pasted from google dont work. You gotta open the page and grab the link once in. Or use Bing.

is this the " flat earth cultist map " you were looking for ? 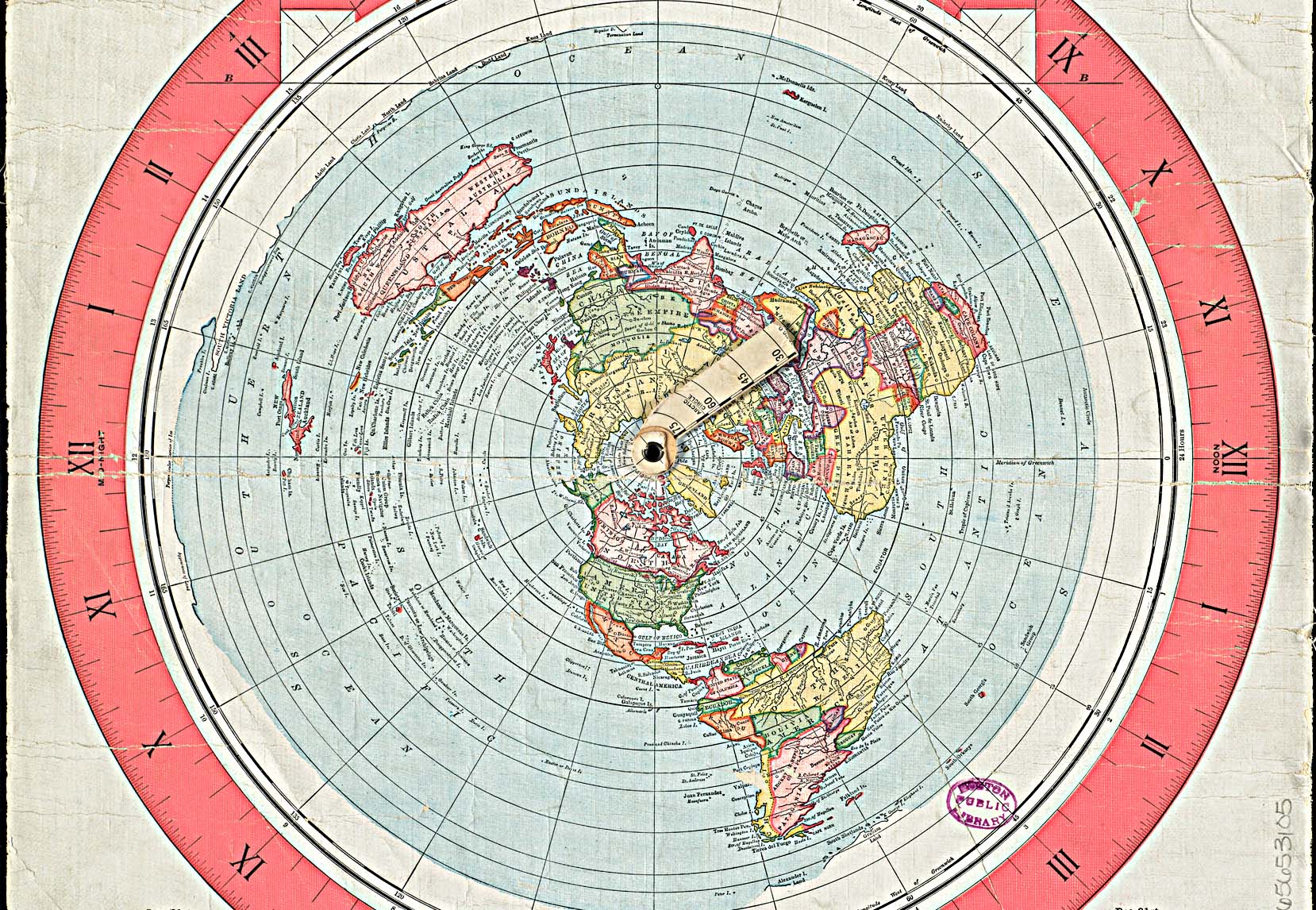 and the bonus airtravel question :

"In the Middle Ages people believed that the earth was flat, for which they had at least the evidence of their senses: we believe it to be round, not because as many as one per cent of us could give the physical reasons for so quaint a belief, but because modern science has convinced us that nothing that is obvious is true, and that everything that is magical, improbable, extraordinary, gigantic, microscopic, heartless, or outrageous is scientific."

Maybe if were presented like a tube, se a toilet paper roll tube in shape, it'd be a lot more fun and sensible as a thought experiment. But they map everything all crunched up, as a religion, totally nuts.

Plus satellites, Apollo missions, ISS, high altitude flights, cameras attached to balloons by kids and a whole bunch of other things.

But I see you won't be convinced because you're a flat earther. FE'rs like to ignore science and make up their own (deluded) reality.

I'm not a flat earth expert. Not even close. What I am an expert at is how much we've been brainwashed to believe all that science and tptb have told us. I just think a awful lot of what we've been taught is a lie. This keeps the masses thinking in a certain way, keeps their minds locked up and asleep to the big picture. The small man who you need in the slave class can't start thinking outside the box and knowing the "big picture". If they do who knows what would happen. The money and energy would might flowing to the top of the piramide.