How can we stop a Tornado? 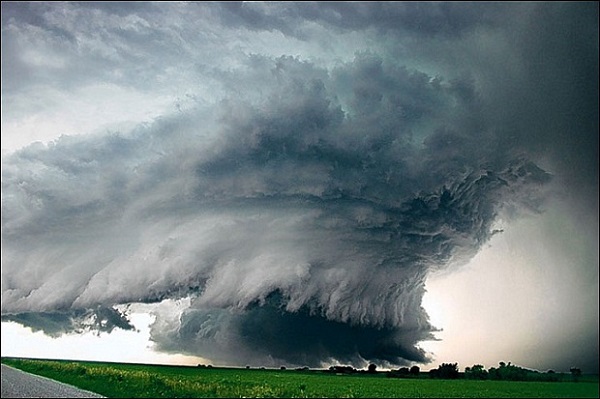 Comparing these two natural phenomena, it is clear that their nature and structure is identical. Both whirlwinds and both are born from counter flows of air. 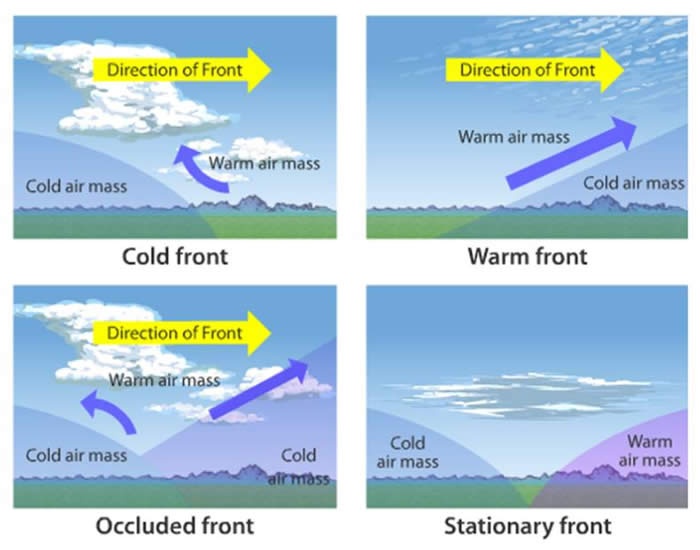 It is well visible in photos of Jupiter where its red spot represents the whirlwind formed by two counter flows of air.

The Tornado is formed, unlike a hurricane, generally, on land and has a smaller size. By it’s destructive force, it , sometimes, is not inferior to the hurricane, only on a smaller scale. The second factor of the birth of a Tornado, in my opinion, is a rather intense stream of air ascending vertically from the heated area of land.

Having got between two counter flows of air, the ascending stream begins to twist and will be transformed into a Tornado.

The force of a tornado is influenced by thunderclouds, which shield areas of land and by that interfere with the penetration of the ascending air stream into the upper atmosphere layers that, in turn, influence on how long the Tornado will last. 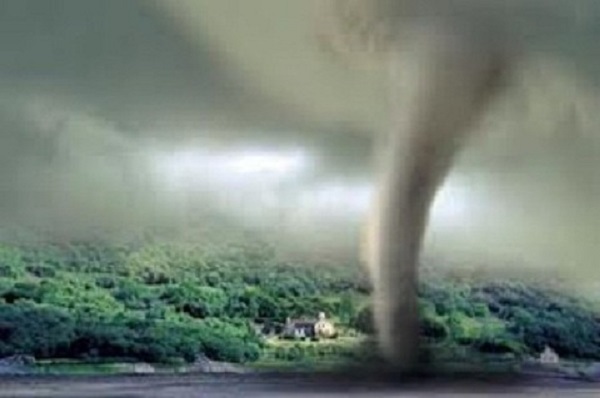 Today, science, studying tornadoes is only capable to ascertain its emergence, for the early notification of the population about its approach, which is along the line of the Tornado.

Is it possible to influence the route along which this monster moves and itself? It is, of course, a question. 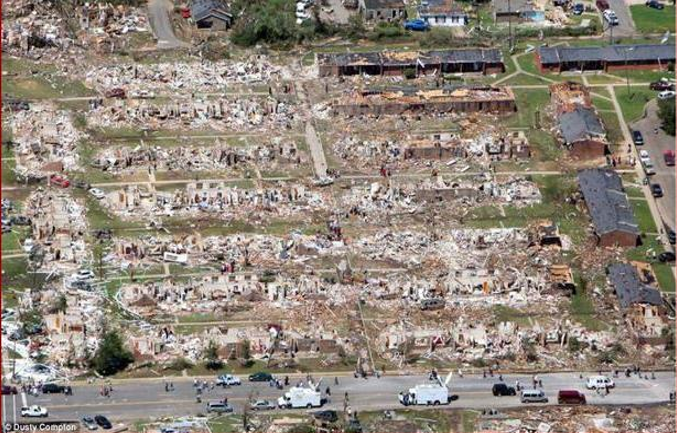 Approximately 1,500 people are killed each year due to the destructive power of tornadoes.

The route of the movement of a tornado is defined, first of all, by the general direction in which the clouds in that area move.

In practice, a tornado, generally, keeping this direction of the movement, constantly scours, deviating rather strongly from the routes of clouds.

What forces it to do so?

Most likely, unevenly heated areas of the lands surface (or waters). The rising warm air creates below a discharge with a pressure drop where more cool air rushes in from all directions. If a Tornado passes near this site, then it will be pulled towards it naturally. The Tornado intensifies after feeding from the ascending stream of air. The most heated sites of the terrain, are  generally cities and towns. As a rule, those are the ones that a Tornado visits, causing mass destruction.

What conclusions can be drawn?

There is an opportunity here to more precisely predict a way of the movement of a tornado by installation of permanent temperature sensors around cities and towns.

On the display monitor in the Tornado control services, there will be visible, in real time a temperature map of a specific area with the general route of the Tornado. It will allow predicting with high probability the path changes a tornado will make. For protection of cities and towns, it will be necessary to lower the general temperature of this area, watering roads and roofs of houses with water as they are the most heated sites. Smoking territories, adjacent to the city, can add additional protection to the cities against a Tornado. It is known that in order to fight against spring frosts which damage blossomed buds and flowers you use smoke.The temperature on the smoke-filled site will increase by 2 - 3 degrees.

How can this be done?

Today in armies there are powerful vehicles, on a tank base(or other), that are used for the production of smoke screens. 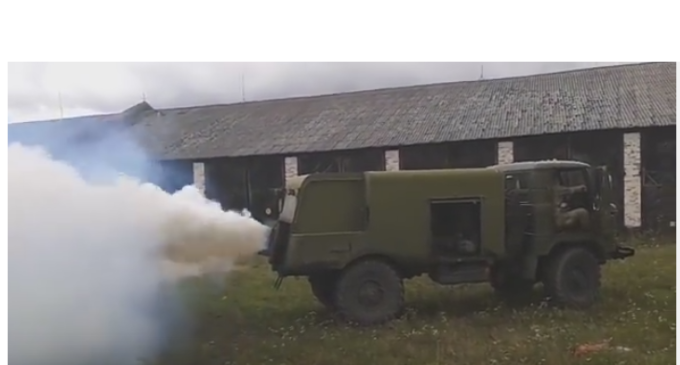 In cities where there is a tornado threat, similar vehicles should be placed. 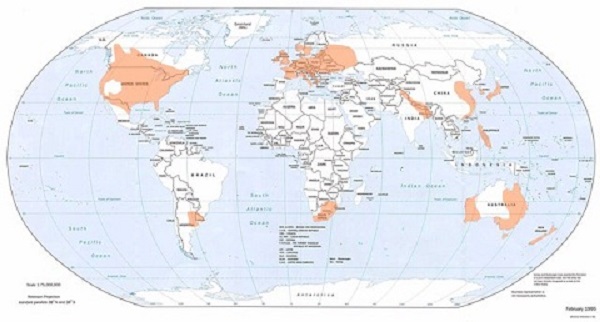 Places where tornadoes can be formed are marked on the map with an orange color.

At a threat of a tornado, such a vehicle is sent to its direction placing a smoke screen, enthralling the Tornado, taking it away  from the city, not being afraid that it (the Tornado) will damage this car since it weight exceeds 50 tons. The cost of these means of protection will be less expensive than the damage the Tornado will inflict.

Is it is possible to influence this monster?

Let's take a bottle or a cylinder for a cooler. Fill it with water and turn it upside down.

Water will begin to follow, creating a discharge inside the bottle, which in turn, interferes with its outflow.

Towards the flow of water there will be air bubbles trying to break in, also interfering with its outflow. 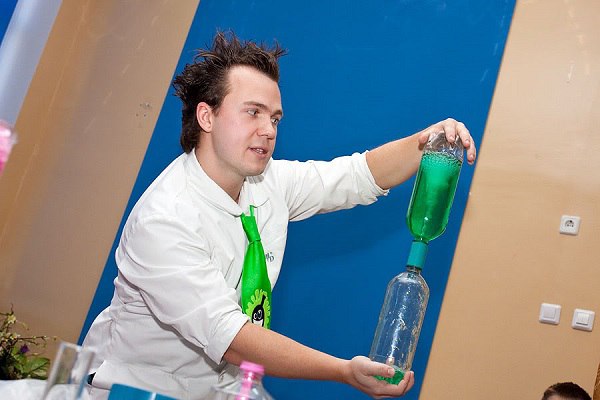 Now we will repeat experiment, but having turned a bottle, we will spin the water.

Centrifugal force will spread the water on the walls of the bottle and in the middle of the following stream will form an opening through which external air will enter, without meeting an obstacle, for compensation of the created discharge.

In the first case we see a turbulent process of water outflow (messy), at the same time water follows slowly, in the second case – a laminar process (ordered) - water follows quickly.

Let's try, having taken the second case, for a moment block the opening of the bottle with a finger.

At the same time water will sharply accumulate, and the water leakage process will pass from laminar into turbulent.

Now we will use what we learned from the experiment with the Tornado :

The ordered whirlwind has a laminar character.

It is possible to assume the following scenario -

The observation services find out that a Tornado was created and tracked its route - which poses a threat to populated areas.So they transfers information to an airfield in which there is a plane prepared for such cases. 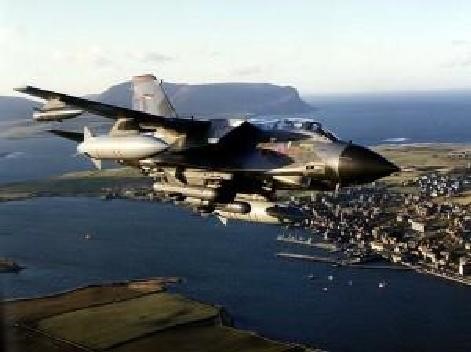 A fighter aircraft with explosive missiles takes off.

It flies up by a tornado and launches the guided missile in the lower part of a tornado.

Explosion of the rocket in this place will be similar to our finger in the second experiment.

The laminar movement of a whirlwind will turn into a turbulent one which will extinguish the tornado .This will work since now, in this spot, there cannot appear a column that rises a stream of warm air which serves as the trigger for the formation of a Tornado.

I would like to hear you ideas on the subject

I love your original thread ideas. Star and Flag OP.

What if you could use a massive version of those sonic weapons, or perhaps a super vacuum?

I'm not sure if either of those would physically stop a tornado. I'm just spitballin here

Weather is caused by uneven convection on the surface of the earth, due to the suns heat reflecting or absorbing into it.

Above a black field it rises quickly, and above a cold body of water it doesn't, those differences cause weather.

The scale of the surface area of the earth or the sun is too big to realistically control.

One of the first problems that comes to mind is the sheer scale we're talking about. Tornado producing systems are so large that they generally span across multiple States at the same time (I'm in the US). Those storm systems can easily move between 20-70 mph in a given direction, meaning the ground they cover is enormous. That's one reason dozens of counties in the same State can be covered by the same "tornado watch", which is merely a notice that the conditions for a tornado are possible.

The next problem that comes to mind is the enormous amount of resources we'd need to exhaust in order to "mobilize" against potential tornadoes. Going with the observation in my first paragraph, we'd have to mobilize "anti-tornado forces" in every single one of those counties every single time there was a tornado watch (note: tornadoes can still occur when there's no tornado watch). I can't speak for others, but the State I'm in is both a hotbed for tornadoes and a "low tax/small government" State. When tornado season comes around, there are simply too many potentially tornado producing storms to do anything like this & nowhere near enough govt resources to fund it. Here's a picture showing the scale of "Tornado Alley" to get the point across.

posted on Mar, 18 2017 @ 06:31 PM
link
One time I shot a 5" titanium salute mortar shell at a category 4 hurricane, but since the eye didn't come overhead as projected, where I had intended to fire it into, it didn't manage to kill the beast. You wouldn't even believe how the power less neighborhood (we hardly got our feathers ruffled by it like the WC said to expect, but the power was out) etc responded to car alarms going off and houses shaking for a good block or so (during post-9/11 America) LOL!

Here's one purposefully (it appears) detonating on the ground:


They cause a true rolling thunderclap. Even the little 3" do!

edit on 18-3-2017 by IgnoranceIsntBlisss because: (no reason given)

originally posted by: Arnie123
Detonate a Nuke in the path of the Tornado, problem solved.

A nuke would create radioactive fallout. But one of those fuel-air-explosive bombs would not have that problem. And iit's blast radius would be enough to turbulate the velocity field of the largest tornado. At least it would be entertaining to watch.

THat's the kind of stuff the military ought to be invested in, not this Dept. of Offense crap.

Using a tactical nuke to extinguish/dissipate the thing would be like putting out a match with a block of C4. LoL
edit on 18-3-2017 by andy06shake because: (no reason given)

I love your original thread ideas. Star and Flag OP.

What if you could use a massive version of those sonic weapons, or perhaps a super vacuum?

I'm not sure if either of those would physically stop a tornado. I'm just spitballin here


Haha thank you very much , I try

Using a tactical nuke to extinguish/dissipate the thing would be like putting out a match with a block of C4. LoL

Wow that is awesome.

OP, You make me glad. Glad that people are breaking the concept of a natural disaster into its constituents and coming up with a solution. Whether or not your solutions make sense, or are practical, or would ever be implimented...

Don't stop thinking that way. I hope you are moving into ever higher levels of education

I don't want to be in either one ever again.

Was either one fatal?

originally posted by: Phage
a reply to: c2oden

Was either one fatal?

I realized, too late, that my question was not in good taste.

It was just a question.
I brought it up.