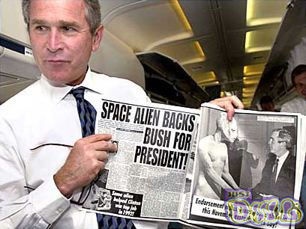 No longer my least-favorite POTUS, George Bush Jr. was a recent guest on Jimmy Kimmel Live. As he has done in the past with other ex-presidents, Kimmel asked Bush 2.0 about classified UFO documents. Unfortunately, nothing earth-shattering was revealed- but, it might be worth a chuckle for some ATS members. Following the video is a text transcript.

“This is a question, first, that I think is important to me and to the country. When you were in office, I don’t know when this happened or if it happened, did you go through the secret files, the UFO documents? Because…”
Bush interrupted, “Maybe.”

Kimmel finished his question, “…that would be the first thing I did.”
Bush responded: “My daughters asked the same question.”

Kimmel was surprised by this, and asked, “Would you be allowed to tell your daughters what was in those files?”
“No,” Bush replied.

Kimmel continued to push, “Now that you’re out of office, you can do anything you want, right?”
“True. But I am not telling you,” Bush replied.

Kimmel then sought to clarify, “Are you not telling me you looked at them?”
“I’m not telling you nuthin’,” Bush responded. This got a chuckle out of the crowd and Kimmel.

However, Kimmel was not done yet. He asked, “Are there really great secrets that you know that you can’t share with people?”
“Yeah,” Bush replied.

Kimmel then asked, “There are? And you never write about them?”
“No,” Bush replied.

Kimmel then suggested perhaps Bush would write about it later in life, like when he is 90.
“No,” Bush replied.

Still pressing, Kimmel asked, “Nothing? What if you were to get a little loopy and…”
“Start drinking again?,” Bush asked.

posted on Mar, 15 2017 @ 11:53 PM
link
He's been asking almost all former presidents that's been in office since the 90's, including Hillary during this last election.
They make it out as a joke during all interviews, but I do find it interesting that it's been such a subject to bring up, they could just avoid it.

It's either to increase the ridicule since more and more people are aware of the subject and takes it more serious or they are trying to bring it up to make more people aware of it.

All questions are scripted, so everyone knows the questions and topics before the show is recorded.

Asking him about UFOs was a humorous expression of futility.

But if it were me in Jimmy's chair, I would have asked him why during the months leading up to 9/11 did he not act when the CIA was briefing him semi frequently about the terrorist cell operating in our homeland.

Why when it was stated to then president Bush that there was a possibility that this terrorist cell would strike with airplanes did he not at the very least heighten airport security?

And lastly, and most obviously, why on earth would the president who is the son of another president who was also the head of the CIA not act on the most urgent of intelligence regarding national security when his own CIA officials are throwing it in his face?

But that wouldn't be the respectful thing to do to a former president on late night TV.

posted on Mar, 16 2017 @ 03:27 AM
link
Did I not just here Bush reply Yeah to the question about are there ufo secrets you cant tell us about? If I did then there you have it and the humorous tone and laughter is a veil!


I know its UFO section but explain a bit more.

A little elementary detective work would debunk your debunking:

The direct warnings to Mr. Bush about the possibility of a Qaeda attack began in the spring of 2001. By May 1, the Central Intelligence Agency told the White House of a report that “a group presently in the United States” was planning a terrorist operation. Weeks later, on June 22, the daily brief reported that Qaeda strikes could be “imminent,” although intelligence suggested the time frame was flexible.

But some in the administration considered the warning to be just bluster. An intelligence official and a member of the Bush administration both told me in interviews that the neoconservative leaders who had recently assumed power at the Pentagon were warning the White House that the C.I.A. had been fooled; according to this theory, Bin Laden was merely pretending to be planning an attack to distract the administration from Saddam Hussein, whom the neoconservatives saw as a greater threat. Intelligence officials, these sources said, protested that the idea of Bin Laden, an Islamic fundamentalist, conspiring with Mr. Hussein, an Iraqi secularist, was ridiculous, but the neoconservatives’ suspicions were nevertheless carrying the day.

This is basically meaningless. Nothing informative at all.

You are missing the point where the CIA and all other intelligence agencies were NOT connected, but rather separate entities.
They all dismissed each others intell, I explained that. I wasn't being literal when I said "didn't reach his desk" it probably did, but they brushed it aside because they got threats like that all the time. And that is what happened.
And as a result with such careless intelligence handling the US got attacked, and Bush ruined his image by going to war with Iraq and what not.

Even right up to the very end, all intelligence agencies were watching the planes fly erratically, all over the place, there's an entire documentary about those who warned the 'next in line' and watched as nothing happened.
9/11 happened because of miscommunication and stubbornness. It wasn't an inside job from the Bush administration, and if it was Bush had nothing to do with the planning.