Kimdotcom - President Trump is in danger from CIA!

Shortly after I started spreading this, the message disappeared. But there is still a post left talking about how he needs to talk to Trump.

Here is my original message.
Twitter link to origianl message

This here is a print screen of his message. 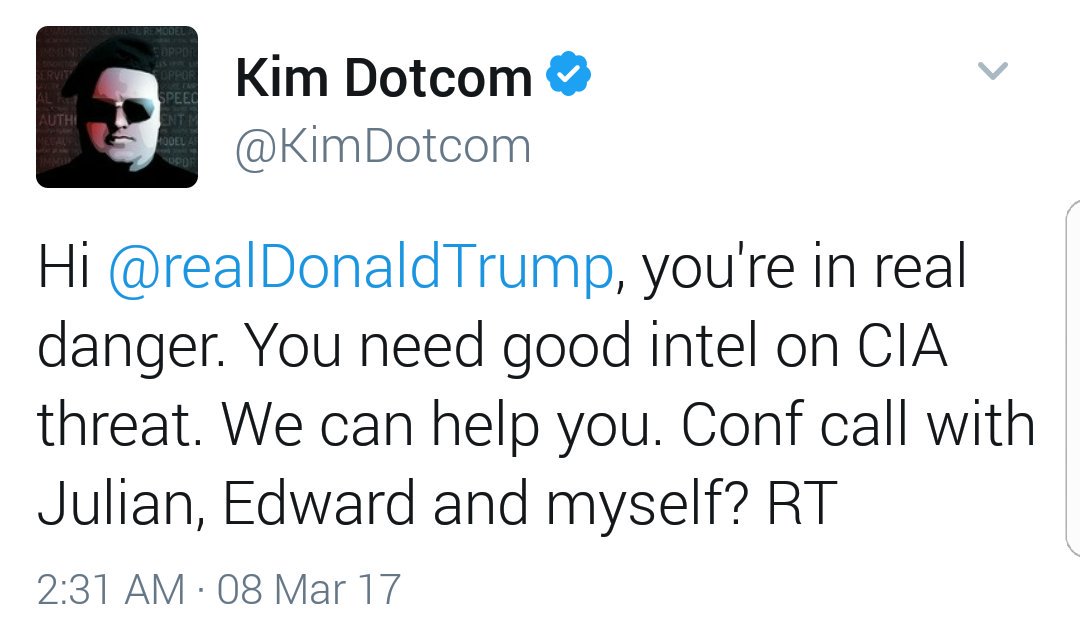 Well isn't this interesting. With all the information coming to light the CIA has lost all credibility right along with the media.
What a bunch of asshats!

Who whispers lies, as we say in germany. And agencies that need to work hidden from the people are whispering...

Don´t trust any secret services, any politicians, any elites and their, from the people, hidden agendas!

originally posted by: roadgravel
What makes this man's opinion carry so much weight?

My understanding is his reputation within the tech and dare I say hacking community is very high, having heard him speak he is on the ball with the lights on. Obviously the situation regarding Megashare is open to debate.


My gut says if it's computer related he will have access to some fairly high profile data.

Just my 2pc on the matter nothing more..

Kimdotcom knows more about this stuff than ANYONE. Trust me, he's good.
edit on 8-3-2017 by elouina because: (no reason given)

posted on Mar, 8 2017 @ 05:10 AM
link
The only problem is that, were he to agree to this conference call, it would be monitored and recorded by some combination of the FBI, NSA and CIA.

I am not sure what the solution is going to be - but it seems to me there might have to be some kind of Spy versus Spy civil war inside of the US Intelligence community.

In truth, the first shots of this war have likely already been fired. Is it just a coincidence that the first casualty of the Trump Administration was National Security Advisor Michael Flynn, former Director of the Defence Intelligence Agency (a senior Spook)...whose conversations with the Russian Ambassador were tapped, taped, transcribed and then leaked?

In light of everything, he should bring Flynn back.

originally posted by: elouina
a reply to: slider1982

Kimdotcom knows more about this stuff than ANYONE. Trust me, he's good.

originally posted by: elouina
a reply to: slider1982

Kimdotcom knows more about this stuff than ANYONE. Trust me, he's good.

I like him too. Not only because he is german, but because he is accused to be a criminal but didn´t hurt anybody than the money bins of some rich and greedy individuals. Hollywood, for example, they are whining about him, while the rest of the world smiles about that whining and wishes him all the best.
Even if he is just trying to save his a$$ via the Orange One, because he will be deported from NZ to the USA.

Were you aware that Rodger Stone was poisoned with Radioactive Polonium over Christmas? The threat is real.

posted on Mar, 8 2017 @ 05:35 AM
link
Vault 7 is really an eye opener. Something has been running through my mind since reading the many press releases and details, I thought about making a thread, but don't care to tend to it, so this seems like a good place to share the thought.

What if, Trump actually is in collusion with the Russians, but for the RIGHT reasons? What if Trump, an individual powerful enough to actually know the reach of the shadow government actually decided to fight it? How would one go about doing so? You cannot do it on an individual basis, it's literally impossible, you would need leverage. How do you gain leverage over a shadow government? It would take an equally powerful individual AND an equally powerful entire government to do so, hence Trump and Russia. No other country could leverage the power, fear, and influence Russia can, No one else has MAD capability. JFK learned the hard way, without something or someone behind you, a single bullet is all it takes to end your effort.

If, and this is gray area material, Trump had decided to either pursue and/or comply with Russia on such a task, the grooming effort claimed by people that Russia has been planning this for many years isn't very far fetched. Russians are known for playing the long game, and hell this could even date back as far as 2000 when Putin originally took power. The shadow government in the US is truly a threat, and these recent leaks show a hint of the depth. With modern technology and hacking capabilities, it's not unrealistic that the CIA could themselves be in possession of US nuclear launch codes and an ability to use them.

What if this is just the beginning of an internal espionage war, one that has to be waged so covertly on one side, that the other side must become the most intriguing worldwide topic. Trump and Russia. How do you eliminate something that doesn't exist? Contingency and insurance. Trump is the contingency, Russia is the insurance. Any transmissions and collusion would most certainly be detected and known by the CIA, but, what if what they picked up was so deep it would risk the longevity of the shadow government itself. What if such damning information was known by both sides, that it would destroy the other as well as themselves? An informational MAD risking the existence of a shadow government.

The shadow government would do all it could to mitigate and deflect away from themselves. It would use all avenues available for mass manipulation. It would reach into the deepest depths to try to eliminate the problem without being ever known. Then vault 7 happens.

At the very least it's a good movie plot

originally posted by: Konduit
If Trump has a stroke, major heart attack or develops some form of terminal cancer... I won't buy it as a "coincidence".

Right, because Trump is the picture of mental and physical health! And, this kind of presidential stress, not to mention the scandals, couldn't take a toll on a 70 year old fast food junkie! /sarcasm

I predicted during the election cycle that Trump would have a stroke or, more likely, suffer from a brain aneurism. If it happens, I'll say "I told you so!"

posted on Mar, 8 2017 @ 06:04 AM
link
I would say everyone is in danger from the alphabet agencies if they smell or even think there is blood in the water.... You do not agree with the NWO then they will find some kind of trash to drag you through... If nothing is found they just let their fake news Burroughs create a smear campaign.
NSA Targets World Leaders for US Geopolitical Interests t.co...

Today, 23 February 2016 at 00:00 GMT [updated 12:20 GMT], WikiLeaks publishes highly classified documents showing that the US National Security Agency bugged a private climate change strategy meeting; between UN Secretary General Ban Ki-Moon and German Chancellor Angela Merkel in Berlin; singled out the Chief of Staff of UN High Commissioner for Refugees (UNHCR) for long term interception targetting his Swiss phone; singled out the Director of the Rules Division of the World Trade Organisation (WTO), Johann Human, and targetted his Swiss phone for long term interception; stole sensitive Italian diplomatic cables detailing how Israel's Prime Minister Benjamin Netanyahu implored Italy's Prime Minister Silvio Berlusconi to help patch up his relationship with US President Barack Obama, who was refusing to talk to Netanyahu; intercepted top EU and Japanese trade ministers discussing their secret strategy and red lines to stop the US "extort[ing]" them at the WTO Doha arounds (the talks subsequently collapsed); explicitly targetted five other top EU economic officials for long term interception, including their French, Austrian and Belgium phone numbers; explicitly targetted the phones of Italy's ambassador to NATO and other top Italian officials for long term interception; and intercepted details of a critical private meeting between then French president Nicolas Sarkozy, Merkel and Berluscon, where the latter was told the Italian banking system was ready to "pop like a cork".

posted on Mar, 8 2017 @ 06:13 AM
link
I am off to bed now that the immediate crisis has been averted. Well, I hope. But I am leaving this food for thought, Kimdotcom knows what he is talking about.


I am not sure what the solution is going to be - but it seems to me there might have to be some kind of Spy versus Spy civil war inside of the US Intelligence community.