POW. Robotics and Automation Get the Project Built

posted on Mar, 6 2017 @ 07:56 AM
link
Ordinary consumers see little of what’s technologically possible. Maybe the tip of the tip of the iceberg. Sometimes what’s happening is top secret. Often the holdups are about playing out the market on a trend before the next one is introduced - controlling obsolescense to protect investments. Other times there’s no money to go ahead.

One project I’m happy to see coming back is David Fisher’s dynamic skyscraper. First announced in 2007, the project stalled after the 2008 crash. But Fisher’s company, the Dynamic Architecture Group, now says it’s being built in Dubai as the Dynamic Tower Hotel, slated to open in 2020.


Dynamic’s concepts are all about creating buildings that move. In this one, each floor of the building rotates 360 degrees, independently. And there’s more! But without further ado, here it is. [And don’t miss the pics at “Towers of Tomorrow” (last link).]

…The Emirati city is to become home to an incredible rotating skyscraper called the Dynamic Tower Hotel, according to a recent announcement by an organisation called Dynamic Architecture Group.

According to the company, the 80-storey building is due to open in 2020 and will be sectioned of into individual levels, all able to complete a 360 degree rotation.

Floor to ceiling glass windows will ensure guests can take advantage of the view, and even opens up the possibility of watching both the sunset and sunrise in the same room on the same day.

In a bid to be energy efficient, the building will also boast wind turbines between each floor and solar panels on the roof.

And this - conceptualized in 1949, it never did get built. 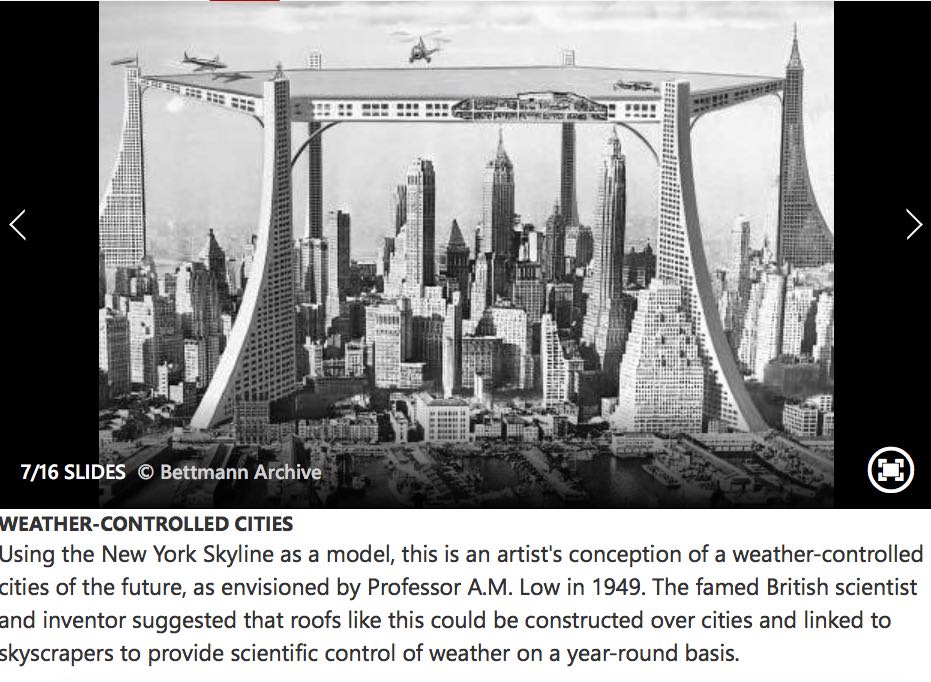 And this - conceptualized in 1949, it never did get built.

Thankfully it never got built.

If I were the users of those building under the roof, I'd be a little pissed-off that the roof was blocking my daylight/sunlight during much of the day.


POW. Robotics and 3-D Taking Over the Building Industry?

NOTE: No, I do not advocate Ludditism. I accept reality and have no intention of banging my head against the proverbial but updated titanium wall. In fact, I'm looking forward to the benefits of automation in my life. However, I do favor the UBI solution, aka Social Security for All, as a realistic way to deal with the massive unemployment on the horizon due to the rise of automation.

While I do not believe it will only take 90 guys onsite, you still have the same 2000 working on the project, just offsite.

While I do not believe it will only take 90 guys onsite, you still have the same 2000 working on the project, just offsite.

Things ARE changing. And as a society, we are facing massive unemployment in every sector. Time to pull up your big boy pants and face reality.