On 24 February 1987, astronomers Oscar Dhalde and Ian Shelton witnessed an incredible sight atop a Chilean mountain: a new star in the night sky. Soon, however, they realised it was not a star's birth; rather, it was a blue supergiant meeting its doom.

Image of Sanduleak in three different wavelengths of light , infrared (red), visible (green), and X-ray (blue)
The diameter of the ring of gas surounding the Star is calculated to be 1 light year wide 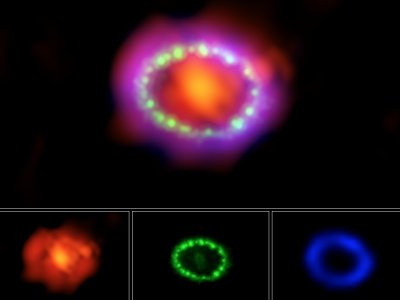 It was not only the brightest supernova seen for hundreds of years, but was also the first time astronomers recorded such an event with modern, high-tech instruments. "Supernova 1987A became one of the best opportunities ever for astronomers to study the phases before, during, and after the death of a star," a video produced by NASA's Chandra X-ray Observatory team said.


This animation gives you a sense of where in the night sky (and just how far away) SN 1987A is located. The remnants lurk inside the Large Magellanic Cloud, a dwarf galaxy that trails the Milky Way some 168,000 light-years from Earth.
www.sciencealert.com...

So when the explosion happened we were but a twinkle in the Earths eye.

I think that's what you are seeing...just takes a while.

Come to think of it, it's very humbling and profound. Some thinking is that solar systems, including ours perhaps, are born out of supernovae from the blast. However I don't know how that fits into the Big Bang theory overall. Whatever, it's a bloody long time in our terms Big Bang or no. Remember Carl Sagan talking about there being more stars in the universe than grains of sand on Earth's beaches..something like that, and that was in his terms. Thing is, we are tiny short lived star children, but we ain't atoms, just something made of the stuff...even Donald is
edit on 5-3-2017 by smurfy because: Text.


That's fantastic stuff, I love these timelapses that allow us to see how things in the universe unfold over several decades.

The ring around the star existed long before before the star blew up. It was formed from winds blown out by the star, but it was too dim to see. When the star exploded, it released a huge flash of ultraviolet light that energized the gas in the ring, causing it to glow brightly. The gas then faded over time.

But that's not all. At some point in the future, the debris expelled by the supernova will smash into the ring, destroying it over the course of a few years. In fact, the shock wave has already passed the inner ring, and is starting to light up the material just beyond it.

Probably be a caesarean section, or really messy. All that nebula everywhere...

I'm amazed the quality of the images over a 30 year period appeared so similar. Awesome though !!


There some some photos of protostars in the process of formation. Protostars are surrounded by discs of dust and are hard to see, but they release jets of stuff which are easier to see.

Here's one such protostar, in the Orion Nebula: 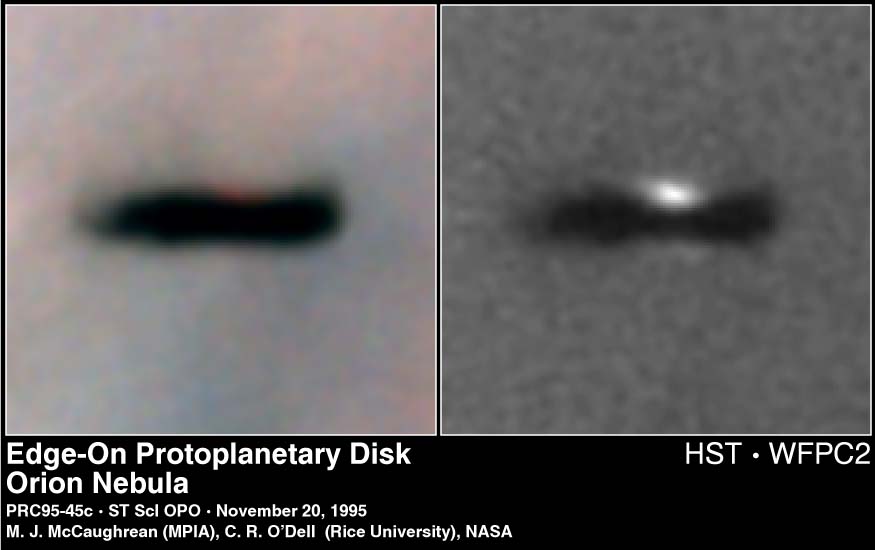 Timelapse of the jets:

posted on Mar, 17 2017 @ 12:57 PM
link
I find this simple and otherwise low-quality animation absolutely stunning, given it is the real thing! We live in a media landscape that is completely saturated by CGI, and yet I think this conveys to me the true and most awesome power of the universe far greater than any LucasArts or Pixar-rendered explosion ever could.